I recently heard about Tsukada Nojo Bijin Nabe‘s latest lunch offerings and decided to pop by their outlet at Chinatown Point to check it out. Located on the second floor, the restaurant isn’t hard to miss as its situated right in front of the escalator as soon as you step off.

The restaurant is tastefully decked out in wooden furnishing, and wood panelling for the booth seats. The tables were all specially customised with an induction stove top, used for the restaurant’s signature hotpot dishes. I was presented with this gorgeous two-tiered wooden box for the D.I.Y Sushi Set ($19.50), which also came with a plate of nori to wrap your sushi with, a bowl of shiny sushi rice and a small wooden paddle to add some authenticity to the interactive lunch set.

The first layer of the box featured three kinds of sashimi: salmon topped with tobiko; tuna and scallop; and a plate with eight different types of condiments, such as dried sakura shrimp, yuzu pepper paste and wolfberries. Depending on how you portion your raw fish, there should be enough in the set to make about three to four mini sashimi sushi rolls. You can also use the side dishes in the bottom tier, or combine it with the sashimi, to make sushi however you like.

I went for salmon and tobiko, topped it off with some pumpkin seed, sakura shrimp, a smidgen of wasabi and chilli flakes — I know it sounds like strange a combination, but works surprisingly well together. 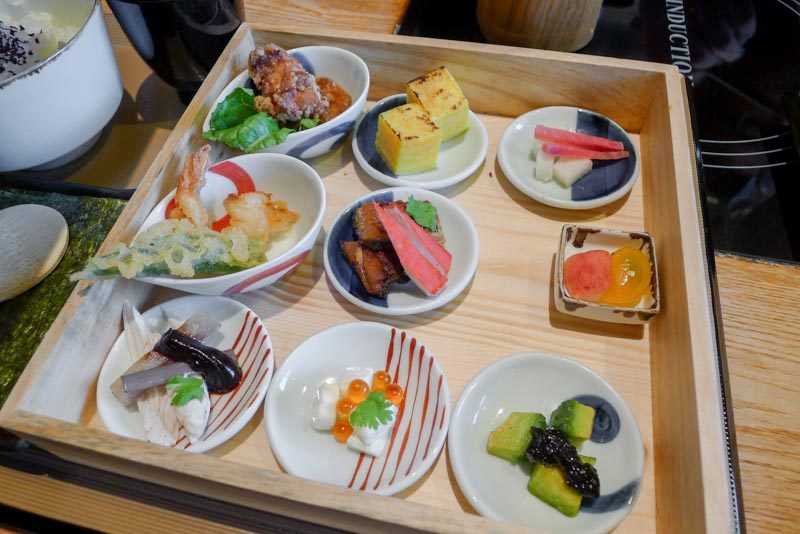 The second layer has a colourful nine-plate array of side dishes, such as avocado with seaweed paste, karaage chicken and unagi. The cream cheese with salmon roe was a favourite amongst everyone at the table, but my personal favourite was the boiled chicken and deep-fried eggplant topped with a sweet miso sauce.

This is a considerably light lunch set as the side dishes all come in nifty portions and you can portion out the rice to whatever amount you want too. The only drawback is that the two tiers prove to be too much of a hassle when you want to access the dishes at the bottom tier. I also had the Megami Men Sesame Soup with Nikumaki Set ($20), which featured their famous collagen broth served with ramen noodles, soft poached chicken breast and a soft boiled egg in a claypot. It also came along with a bamboo basket full of freshly steamed veggies like lotus root, purple sweet potato, yellow zucchini and more.

An interesting fact that ‘megami‘ means ‘goddess’ in Japanese, which highlight the many healthy ingredients used this lunch set.

You can choose to enjoy the vegetables on its own, accompanied by the ginger soy dipping sauce provided. But my recommendation would be to put them into the steaming soup to add another element of texture and depth to the smooth ramen and savoury soup 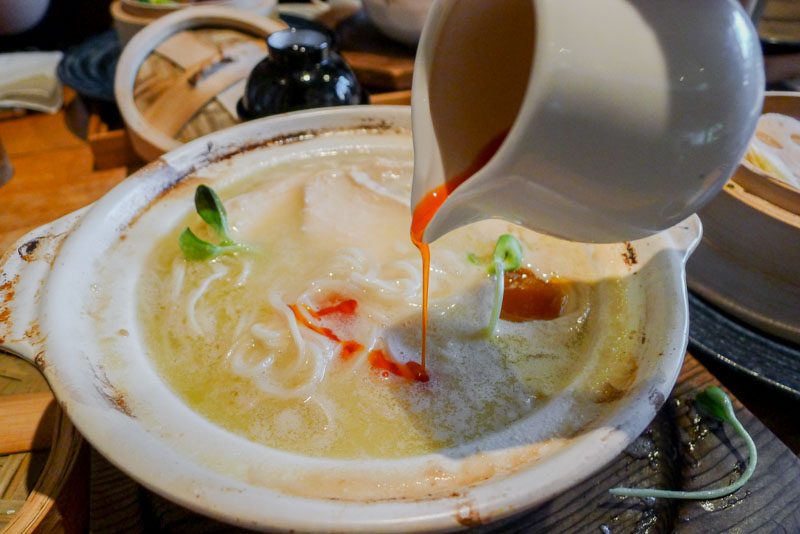 If you want to spice things up, add a little chilli oil into your sesame collagen soup to kick it up a notch. The idea behind Bijin Nabe providing the chilli oil was to purposefully elevate the dish into something like the Japanese tan tan men. Truthfully, the chilli oil did go well with the flavours of the sesame in the soup, but it was still far from being anything close to it.

I had, however, one issue with the soup being too salty. The initial sips were pretty tasty, but as I worked my way through the bowl, it seemed to get saltier and saltier. I ended up feeling extremely thirsty for the rest of the evening.

This is Bijin Nabe’s first time adding new items to their lunch menu since they first started at Chinatown Point five years ago.

The D.I.Y sushi set will appeal to kids and adults alike, but it’s not the most time-efficient lunch choice if you are in a rush back to the office. That being said, these sets are affordable and value-for-money, and if you’re someone who loves interacting with your food, you’ll enjoy these new offerings.