Say hello to Brine, the newest addition to home of some of the hippest cafes in town, a.k.a North Bridge Road. Helmed by the guys from The Laneway Market, this place shares a similar rustic-themed interior, with decorations such as pots of dried flowers and leaves hanging from the ceiling.

Although Brine is not Halal-certified, it uses halal produce with a no pork no lard policy. Thanks to the open kitchen concept, diners will get to see Chef Christopher in action while salivating over the food.

During lunch, it serves ‘casual fine dining’ course meals at an affordable $18 for two courses and $23 for three, giving you the best bang for your buck. For those who enjoy variety, Brine offers a menu that changes almost every day, so you’re always in for a surprise. We started off with crusty whole wheat toasts that came with a dip of strawberry yoghurt and basil oil. While it tasted like a refreshing late breakfast for me, this pairing is pretty unusual. 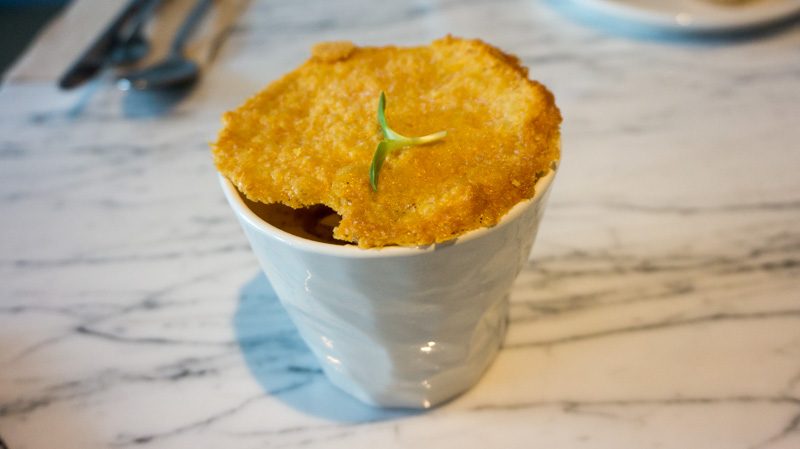 For appetisers, we tried the vegetarian dish of Roasted Cauliflower Veloute, which came with compressed cabbage and crispy parmesan chip on top. While you can choose to eat the cheese on its own, I mixed it into the soup to add an extra texture. The raw cabbage is vacuumed with vegetable stock, which added a hint of natural sweetness and crunch to the soup. The dish of Mussels, garam masala, papadum was generously topped with shaved parmesan cheese and it was definitely a unique take on modern Indian food.

Those mussels were evenly coated, slightly chewy and I never knew that papadum tasted so good with cheese. Another appetiser that we had was the House Smoked Salmon Salad, hidden inside the parmesan espuma (light foam). The espuma was not just for show though, it actually served as a lighter version of salad dressing for this dish. This dish was a visual treat on its own as it was so therapeutic to watch the foam dissolve into a million air bubbles and subsequently revealing the “secrets”, starting with the neatly-lined cucumbers. When all the foam has dissolved, the butterhead lettuce and tiny cubes of apples compressed with orange juice were revealed. Overall, it’s a pretty decent dish. For mains, we tried the wakame (kelp) and roe atop a Norwegian Fjord Trout that was paired with a pale orange coloured pommes puree (mash potatoes) made from red capsicum and fish bone jus. Compared to salmon, the trout’s flesh was leaner and firmer. We all know that lean fish often tastes dry and overly flaky but for this semi-cooked buttery trout, it dissipated upon approaching the tip of my tongue.

The jus managed to add a kick of umami to the trout that paired harmoniously with the combination of sweet mash, zesty pops of roe and kelp that tasted like the ocean. Overall, this was my favourite dish in Brine. At an additional $8, you’ll get a taste of the two-hour sous vide Wagyu Flank served on a bed of black pommes puree that was made of squid ink and copiously topped with fried shallots and red chilli. The savoury black mash potatoes were so smooth, and it also played a part as the steak’s gravy. On top of the enjoyable taste of truffle and basil oil, I have to say that the flank steak was cooked to a perfect medium doneness, which says a lot about chef Christopher’s great finesse.

For the uninitiated, the flank isn’t the priciest cut of beef and if it’s not executed correctly, it would result in a tough piece of meat that will work your jaw muscles. If you’ve opted for three courses (which I strongly recommend), the gold dusted Milk Curd, balsamic strawberry, lemon, basil was a two-layer creamy dessert that was light and fluffy at the same time. The layer on top was an airy ice cream to die for. Towards the bottom, there were balsamic strawberries and milk curd, a combination that was similar to a pannacotta. The entire profile tasted like a lemon cheesecake, but of course, there was no cheese.

While the location isn’t the most convenient, chef Christopher’s creativity with such affordably priced dishes will definitely attract patrons to return for more. Also, the rotating set menu gives you yet another reason to dine here again. The current pricing for the executive set lunch (2 courses) is at $20+.

The ambience is simple and elegant too, great for a first date.