Stepping into British Hainan transported me into the past. Vintage telephones, fans, clocks and radios were displayed everywhere, and the walls were covered with old paintings of Elvis Presley, late singers, photos of Singapore in the ’50s, and more.

Located at Joo Chiat, this quaint little restaurant was almost museum-like in the way that it displayed a myriad of intriguing and eye-catching antiques. The food is straight out of an old-school British Hainanese menu — fork-tender oxtail stew, fish and chips, Hainanese pork chop, and more. Even before I entered the restaurant, its exterior caught me off guard. Two large lions guarded the wooden door, which had a British flag hanging over it. Its walkway was lined with old furnishings, like an old television, quaint little vehicles and more. 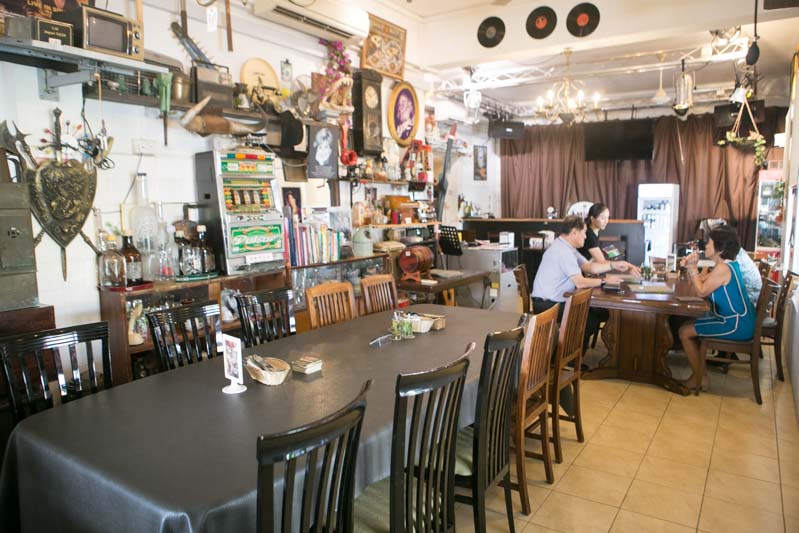 Stepping into the restaurant blew me away. It took me a good five minutes to scan through everything on the walls. 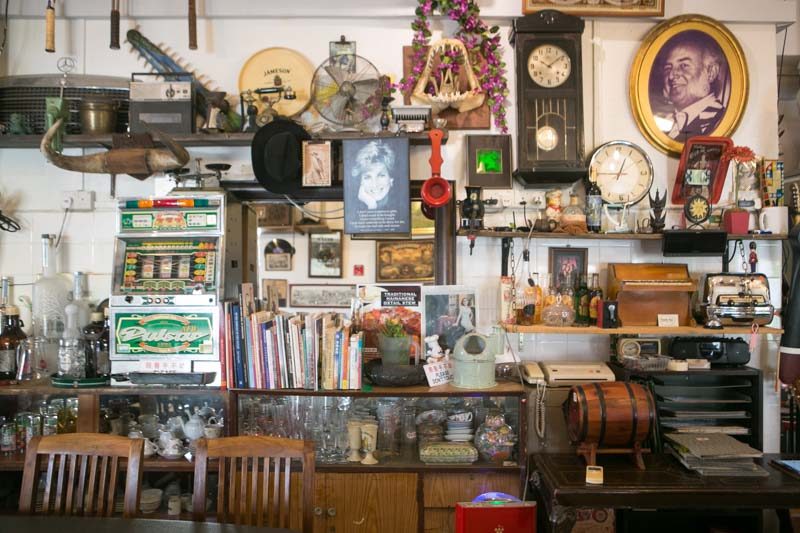 I spotted an old slot machine, old radios and clocks, as well as a bunch of other priceless antiques. Old mini pianos, little porcelain cups, vinyl records, old Mercedes-Benz front grill, and so much more!

It made the entire restaurant exude this old-school charm. It was nostalgic and educational at the same time, which I absolutely loved. 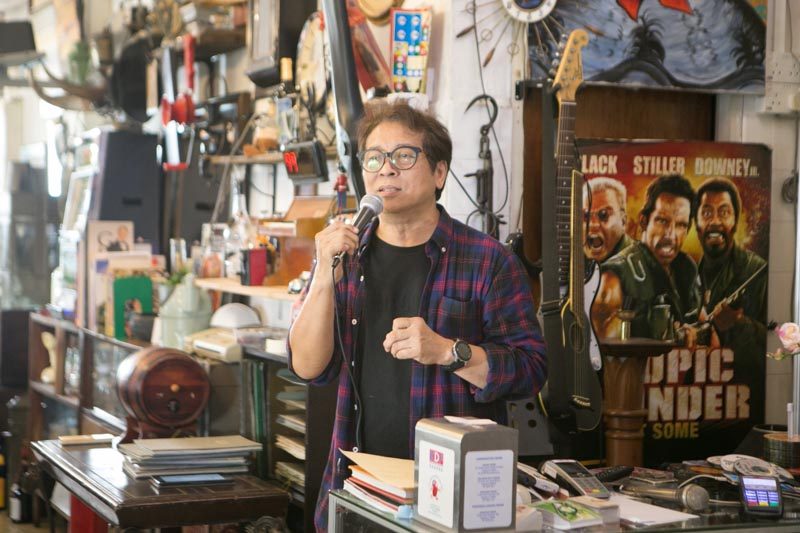 Its owner, 62-year-old Mr Frederick Puah, which everyone affectionately calls ‘Uncle Fred’, collects vintage antiques, so what you see on display at the restaurant are either his own personal collections or donations from members of the public.

“I’m just like a karung guni,” he joked cheerfully.

Despite the museum-like decorations, the atmosphere of the restaurant was really warm and comforting. Uncle Fred personally greeted every customer that came in with a warm “Welcome home!”

His rationale was to create a home dining experience, where his customers could dine with ease. Halfway through our meal, we were even treated to Uncle Fred crooning old tunes on the karaoke set in the restaurant. 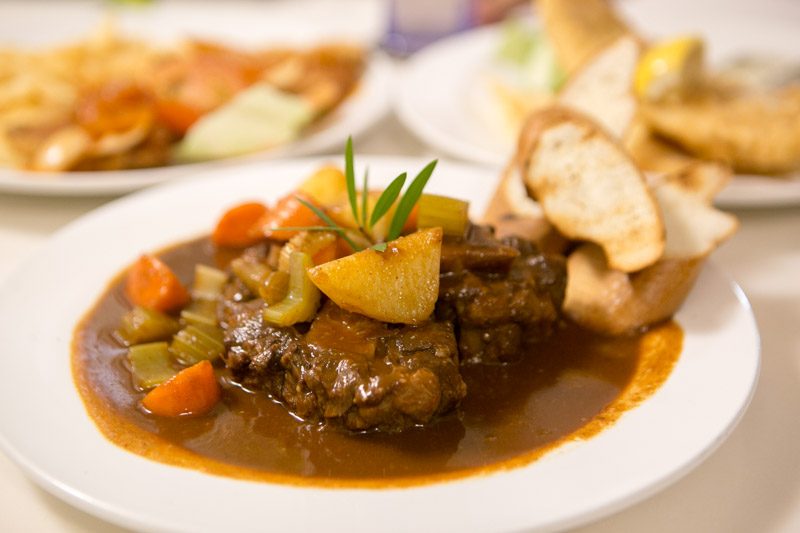 Three large pieces of oxtail were served with slices of toasted baguette, cubes of potato and carrots, slices of celery, as well as a thick and glossy sauce.

You might consider S$29.90 relatively pricey, but its portions were pretty huge and I’d say it’s good for two people. 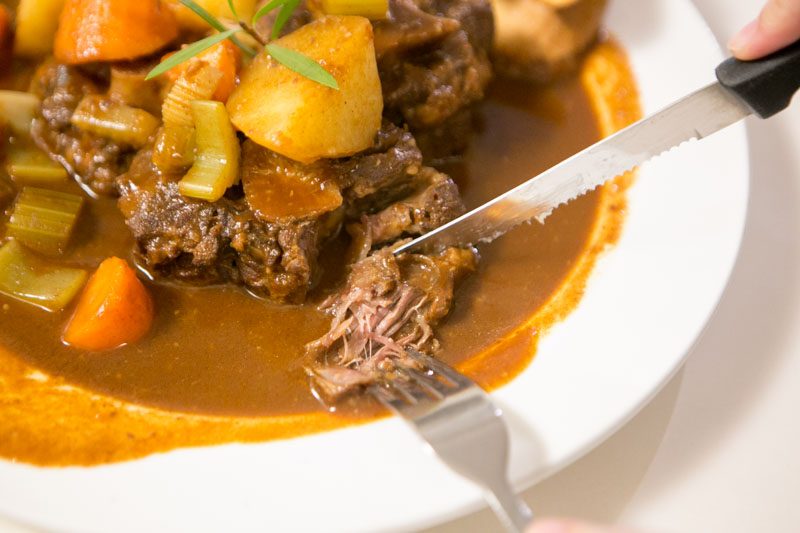 The oxtail had been stewed for six hours, and the results speak for themselves. The meat was soooo tender that I barely had to use my knife to tear the meat apart, and it fell off the bone easily. The oxtail was absolutely delicious. I could taste a natural sweetness, which mellowed out into a savoury tomato-like flavour. The gravy was so rich and aromatic that it faintly reminded me of red wine — gorgeously earthy and tangy.

What impressed me even further was that this dish was made with zero MSG. The sweetness I tasted came from sweet potatoes, so it’s all-natural. Uncle Fred told us that the sweet potatoes are steamed, sliced, then grilled, to get that savoury barbecue-like flavour. Then, it’s blended to become a glossy thick sauce, which he uses in the majority of his dishes to achieve that fresh sweetness. 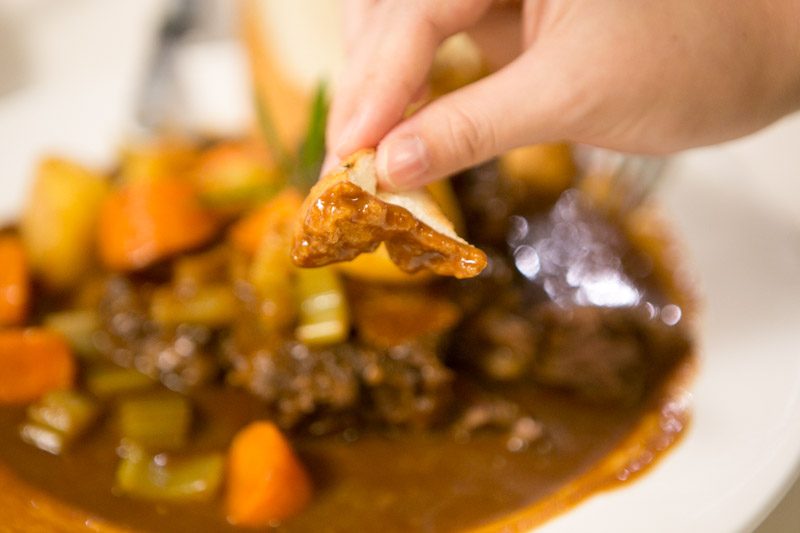 My personal favourite part of the dish — dipping the toasted baguette into the sauce. The bread was crispy on the outside but fluffy and warm on the inside, and was a perfect accompaniment to the rich and savoury gravy. 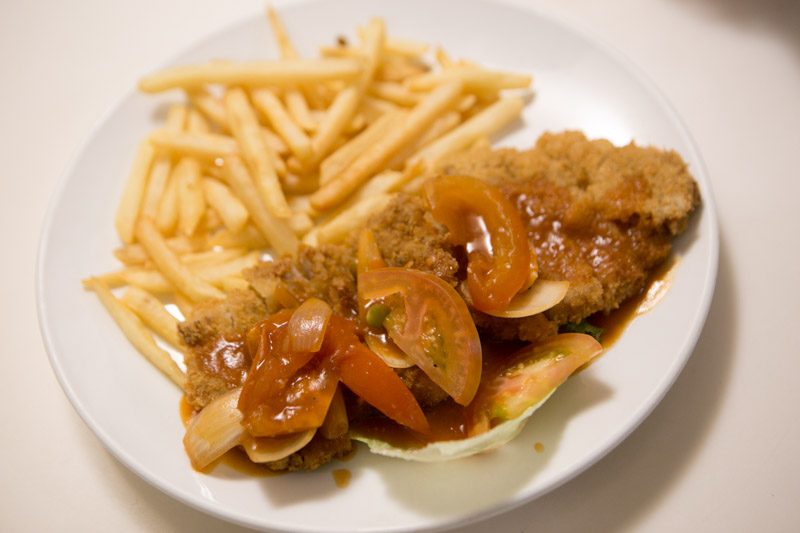 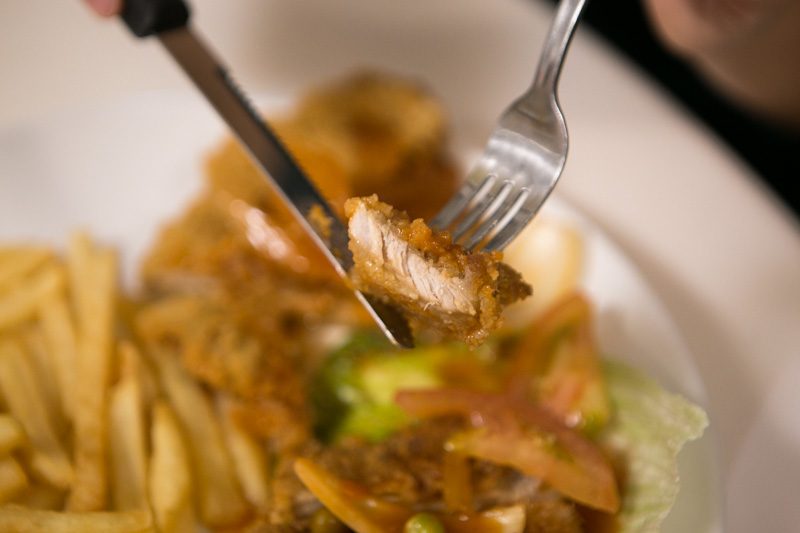 The experience was incredibly old-school. The pork chop was coated with breadcrumbs and was crisp on the outside while the flesh on the inside was tender, soft and juicy.

Uncle Fred spilt the secret behind this dish: the pork chop is first seared, then coated in breadcrumbs, and dipped into sizzling-hot cooking oil to cook fully. I especially loved how the pork chop seemed to absorb the tomato gravy well.

While I’d normally protest against soggy fried pork chops, I gladly made an exception here. It’s oddly comforting and indulgent, and the tomato gravy just makes every bite more savoury and tasty, just like how sweet and sour pork cubes don’t necessarily need to be crunchy in order to be delicious. 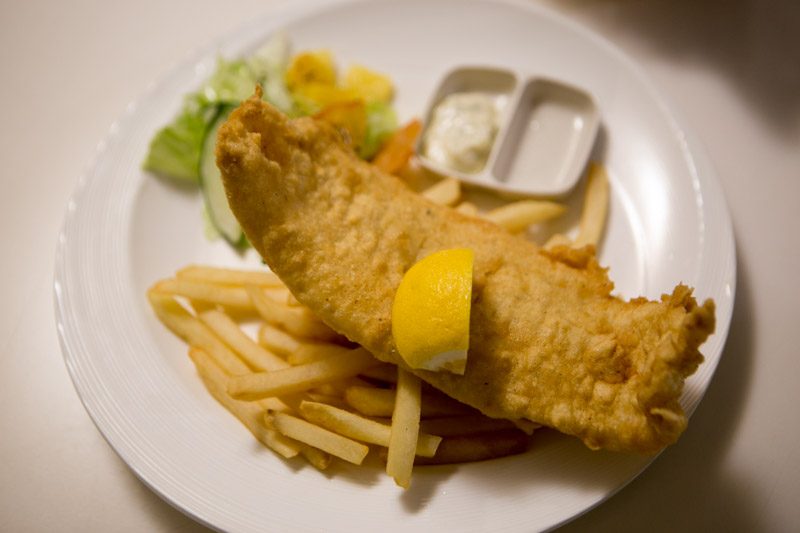 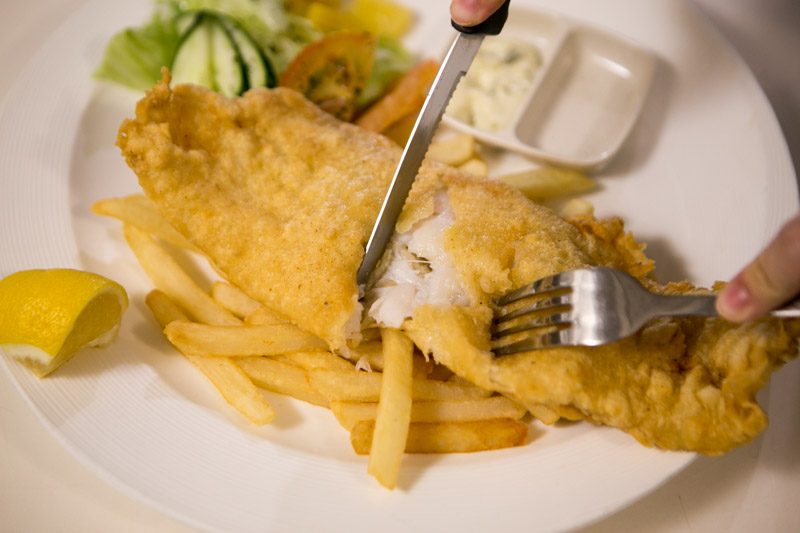 The batter was incredibly light and the dory fish was really tender. While the batter was a tad too plain and I wish there had been more seasoning to it, there was still that undeniable sweetness to each bite. 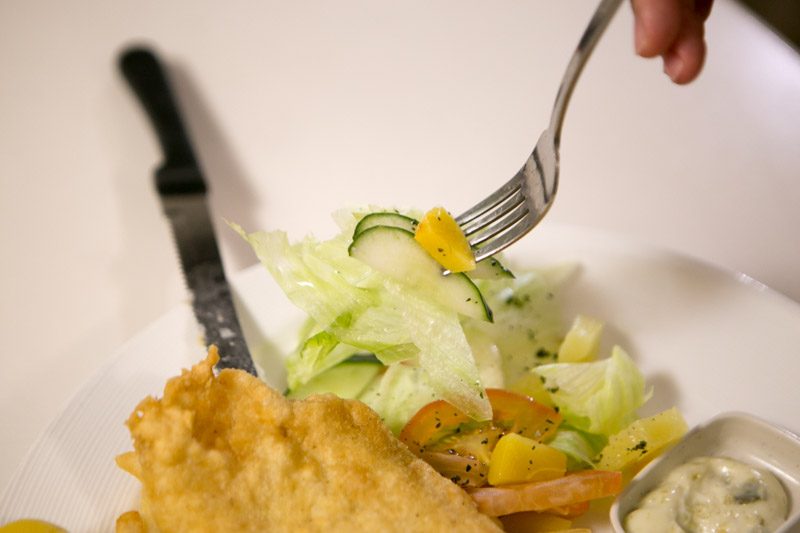 I personally loved the fresh greens, which came with tomato slices, cool pineapples and iceberg lettuce. It was tropical and refreshing at the same time and reminded me of the old-school pineapple mayonnaise salad I used to have as a kid. How nostalgic!

Dining at British Hainan was certainly a unique and memorable experience. It’s not every day you get to say that you dined amongst antique vintages or had fork-tender oxtail stew that had been lovingly stewed for six whole hours.

This is exactly the kind of restaurant I’d bring my grandparents or parents to, just so I can bring them down memory lane and watch as they soak all that nostalgia in and relive their past, right before their very eyes.

Previous articleGrab Your Durian Puff From Old Chang Kee Outlets In Singapore From 1 Aug For A Limited Time
Next articleCelebrate Peach Garden’s 17th Anniversary With S$1.70++ Roasted Whole Chicken In Peking Duck Style And More From Now To 15 Sep