Over a year ago, we did a blind test taste to crown the best bubble tea we could find in Singapore. This time, we set out to rank ten highly popular milk tea brands for their brown sugar fresh milk with pearls, from least favourite to most favourite.

The ten chosen brands are Gong Cha, The Alley, HEYTEA, Jenjudan, R&B Tea, LiHO TEA, Bober Tea, Tiger Sugar, Playmade and Kungfu Tea. Non-fans will be quick to remark that they’ll probably taste the same, but if you’re a bubble tea connoisseur, you’ll know how that assumption is terribly wrong.

From each stall, we purchased their renditions of Brown Sugar Fresh Milk with Pearl/Boba. With the identity of each cup concealed, we judged them based on the following criteria: 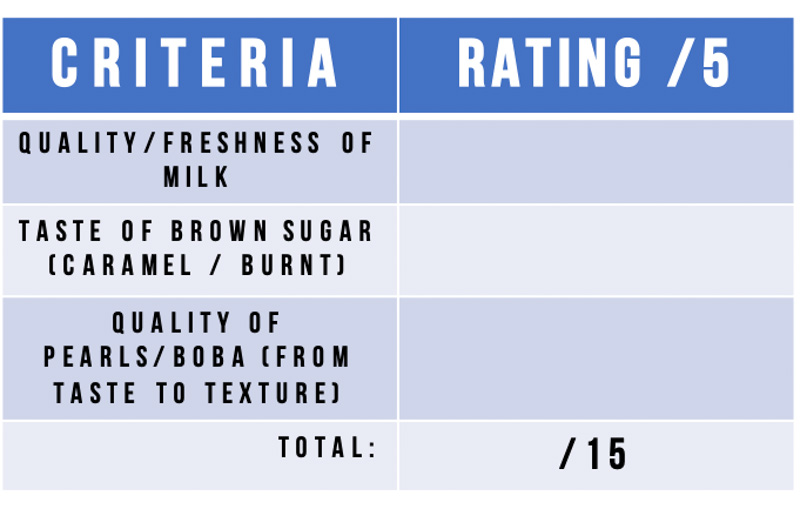 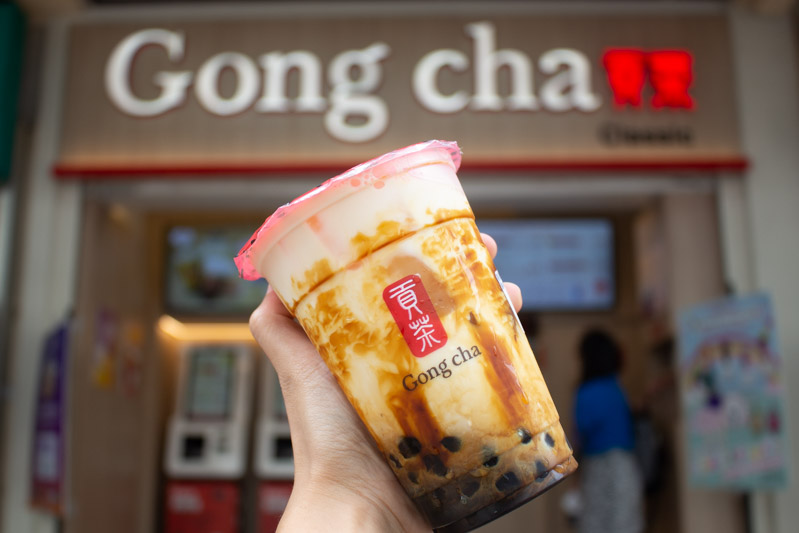 Having had Koi’s Brown Sugar Fresh Milk before, I was quite certain no other brand would have flopped as badly as they did. I suppose Gong Cha (S$4.30) came in as a close contender. 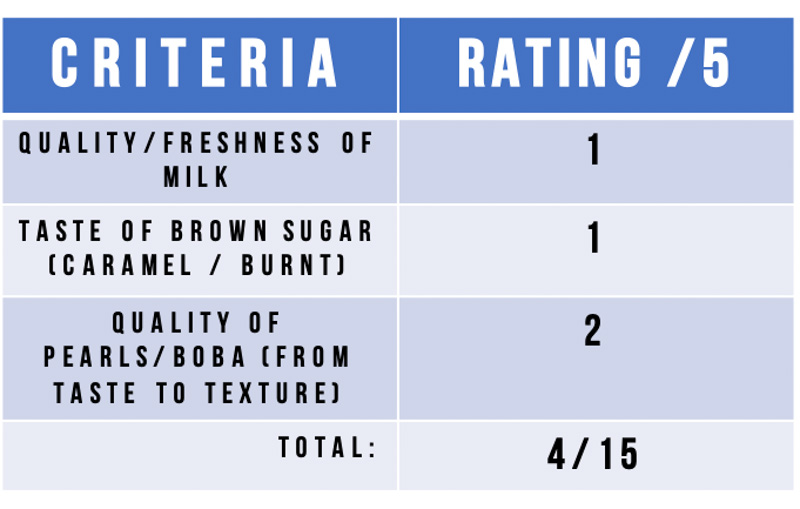 Burnt and oddly flavoured, most of my colleagues were immediately repulsed by this cup, unanimously letting out distressing groans (it was that bad).

Though their pearls retained their standard across all drinks, their Brown Sugar Fresh Milk just really didn’t make the cut at all. We agreed easily to rank Gong Cha last and definitely recommend saving your pennies for everything else that follows in this list. 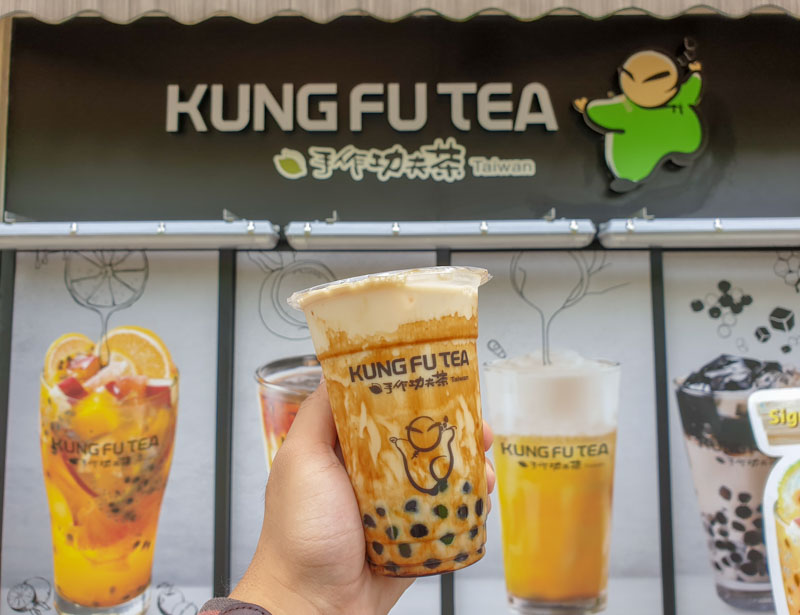 Being the first to be drank, Kung Fu Tea (S$3.60) was agreeably a bad start. The brown sugar flavour was sorely lacking, it almost felt like we were just drinking fresh milk even though the cup appears pretty promising. 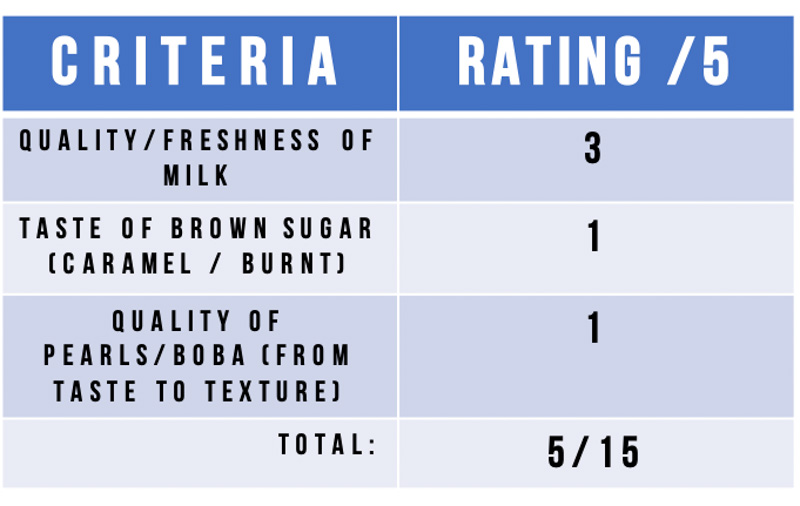 In addition, the pearls were shockingly hard to bite into, having a texture almost ‘like beans’, as someone in the team remarked. The only saving grace of the drink was the fresh milk, scoring an average of 3/5.

For the same price, we agreed that other brands were definitely more value for money. Kung Fu Tea definitely isn’t any of our go-to’s, but do let us know if you think otherwise! 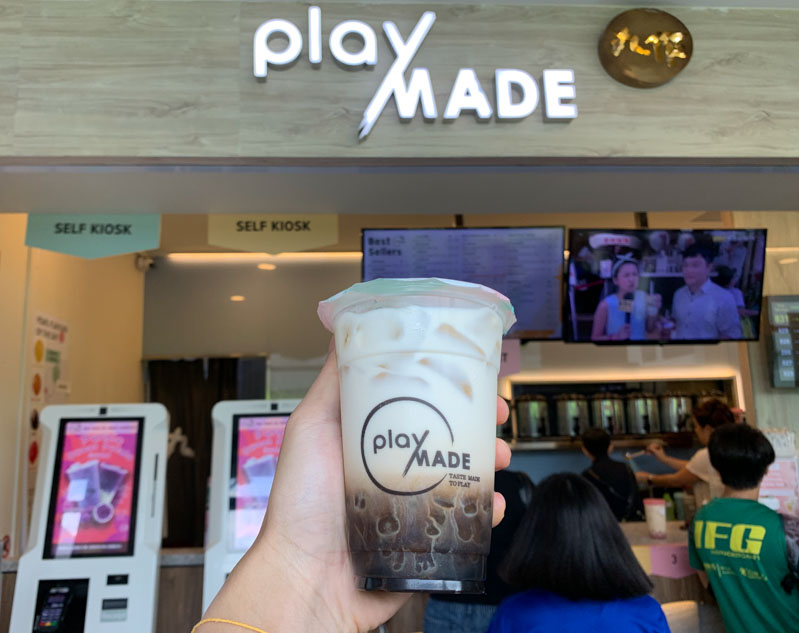 Quite shockingly, Playmade by 丸作 (S$4.40) didn’t fare very well. Knowing how well-liked Playmade is with an increasing number of stalls popping up over the island, we were surprised by the results. 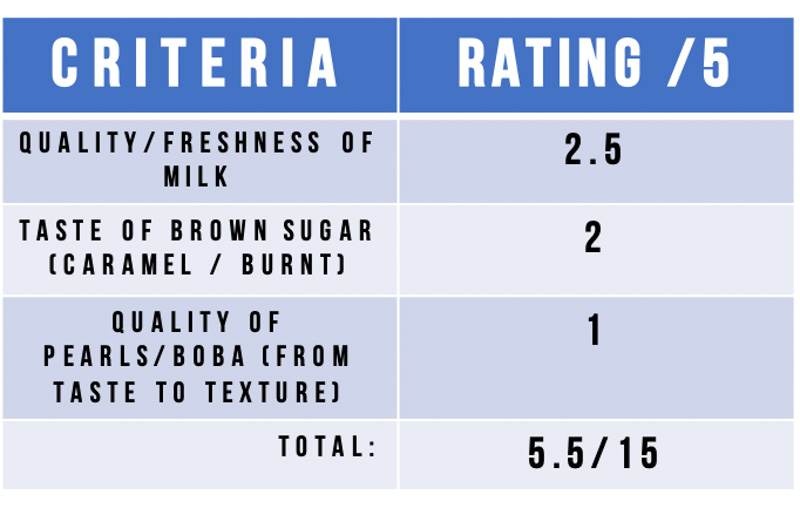 Our biggest complaint was with the almost-rock-hard pearls. Before any ardent fans get defensive, we were equally baffled by the quality of the pearls. While most of us usually patronise the Ang Mo Kio outlet, the one used for the blind taste test was from Nex, so it may really just be a consistency issue.

That jarring flaw aside, the brown sugar and fresh milk combination was only mediocre, though admittedly it may be slightly affected by how repulsed we were by the sub-par pearls. Having its first stall just recently opened at City Link Mall this year, Jenjudan 珍煮丹 (S$5.20) is yet another Taiwanese brand hailing from Taiwan, coming from the world renowned Shilin market itself. 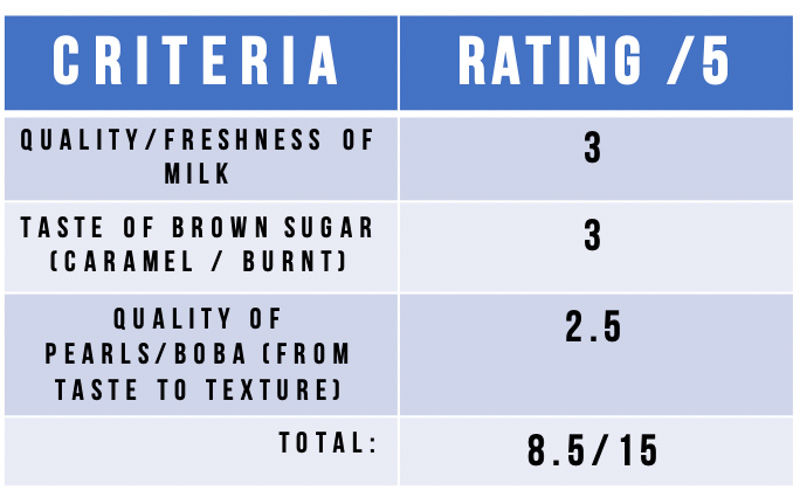 While we enjoyed the sweet and fresh milk, we were definitely disappointed by their pearls. Everyone immediately remarked how small the pearls were in comparison to average bubble tea stalls.

Size aside, the pearls were, unfortunately, a little hard as well. It may be a one-time slip if given the benefit of doubt, considering how Jenjudan prides themselves in freshly-cooked pearls every two hours. Getting a hold of something like The Alley (S$5.30) was sure an accomplishment, considering the impossible queues at Jewel Changi. We were eager to taste for ourselves what the hype is all about. 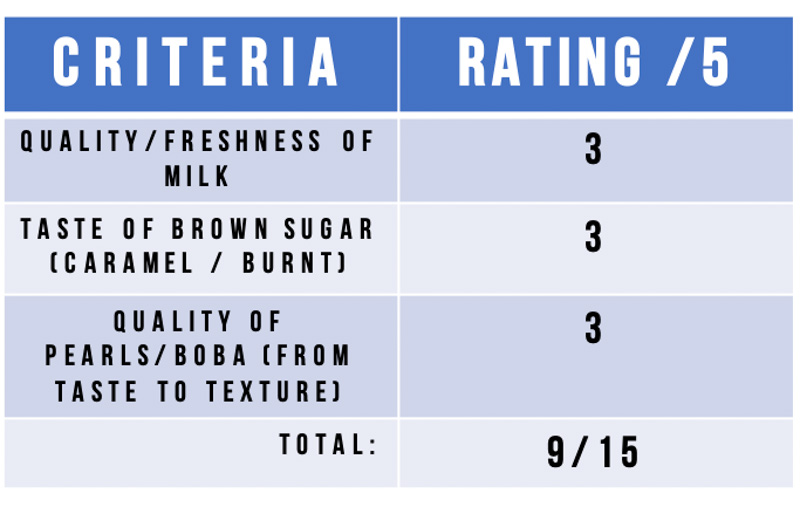 Sadly, it was ranked slightly below average after an initial tie with R&B Tea. Needless to say, we were quite disappointed with it considering the hype surrounding it. Scoring an average of 3/5 across all the criteria, we felt that the pearls deserve a special mention. Still warm when served, there was a very enjoyable distinct brown sugar flavour.

Their second outlet is opening soon at Cineleisure, so fret not if you’re worried the only chance to try The Alley is all the way at Jewel Changi. 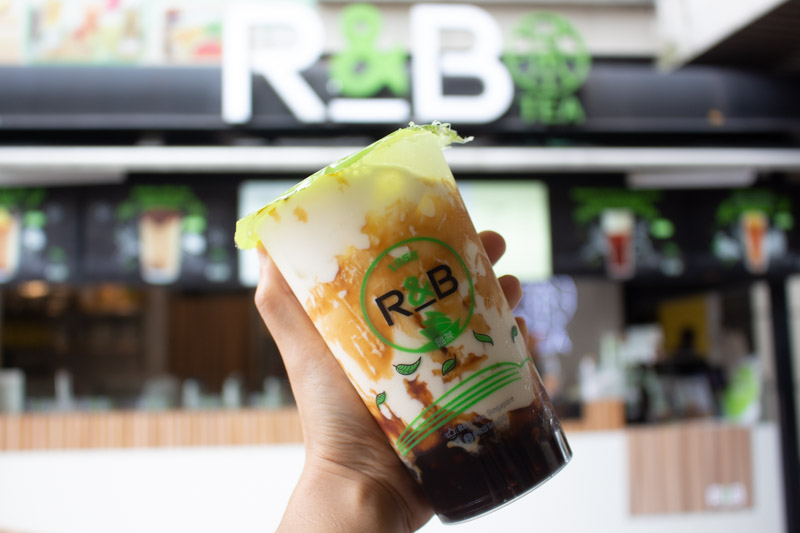 Even before our blind taste test, R&B Tea (S$3.80) was the personal favourite for a few of us on the team, with one of them proudly remarking that she was able to pick out which was R&B’s just by taste. 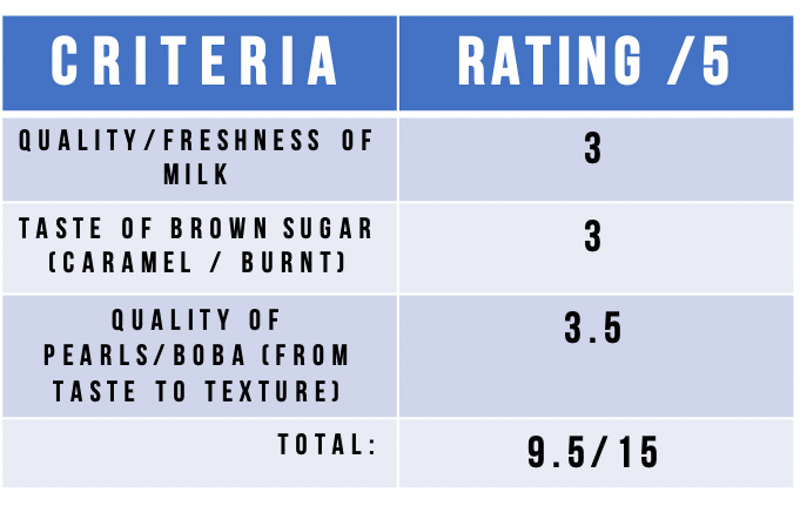 It wasn’t too shabby, I suppose, coming in right in the middle of the better and worse ones. While some of the milk used was distinctively sweeter, R&B’s was a little bland but fresh nevertheless.

No one really had any complaints about the brown sugar flavour, as it was rather well-balanced. The winning 0.5 point was given due to R&B’s soft and very caramelised pearls after being tied with The Alley.

In all, it was a pretty decent cup of brown sugar fresh milk, and came out as slightly above average. 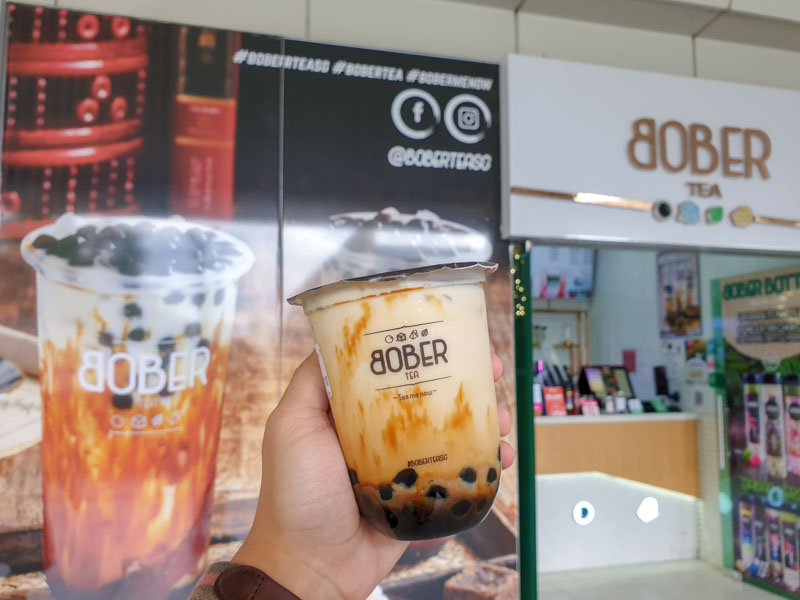 Coming in slightly above average is Bober Tea (S$3.80), having its first opening in the heartlands of Bishan near Junction 8. Bober Tea sat pretty well with most of us, despite it being more known for its colourful fruity and refreshing teas. 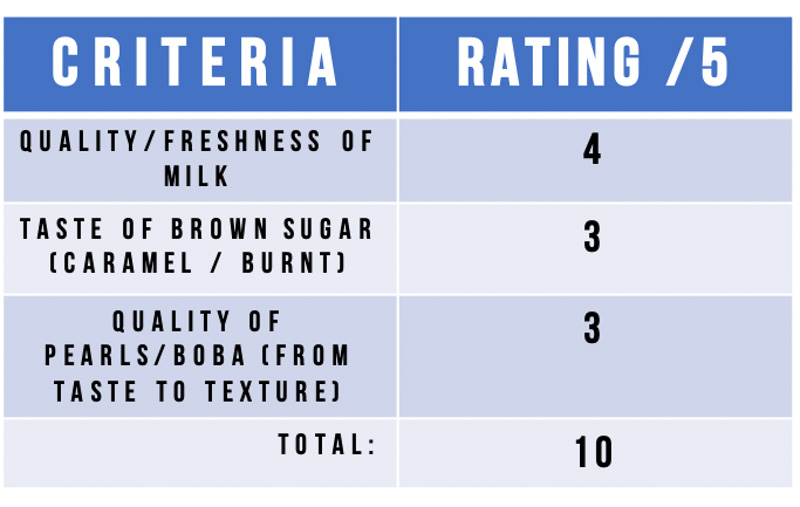 We gave it an easy 4/5 for the fresh milk, though we felt that it was not very balanced with the brown sugar, as it was slightly overpowering.

The pearls were rather consistent throughout, with little chew and had a good bite to them without being too hard. We agreed it’ll be a brown sugar fresh milk we’ll go back for. One of the priciest of them all, Tiger Sugar (S$5.30) is probably the brand that pioneered the whole brown sugar fresh milk craze in Singapore with its record-breaking queues. 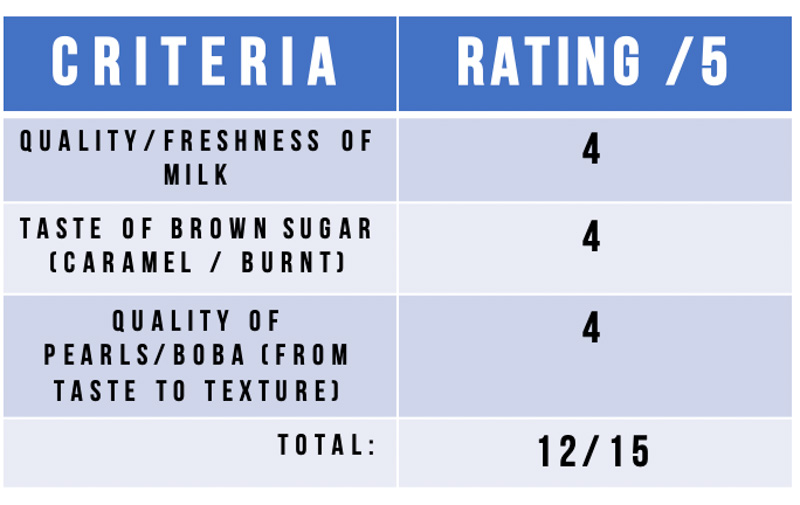 Thankfully, though the hype is here to stay, the bubble tea market has become rather saturated and we no longer see the same crazy queues as before.

Coming in third, we were a little surprised it didn’t do better. The general consensus about the iconic cup slathered with brown sugar was that it definitely tasted a little better than average, explaining the consistent 4/5 across all three criteria.

A colleague added that Tiger’s pearls were definitely of better quality than most we had, being soft and chewy yet still having a bite. There was a distinct brown sugar flavour to the pearls, but was not too overpowering, which we enjoyed. 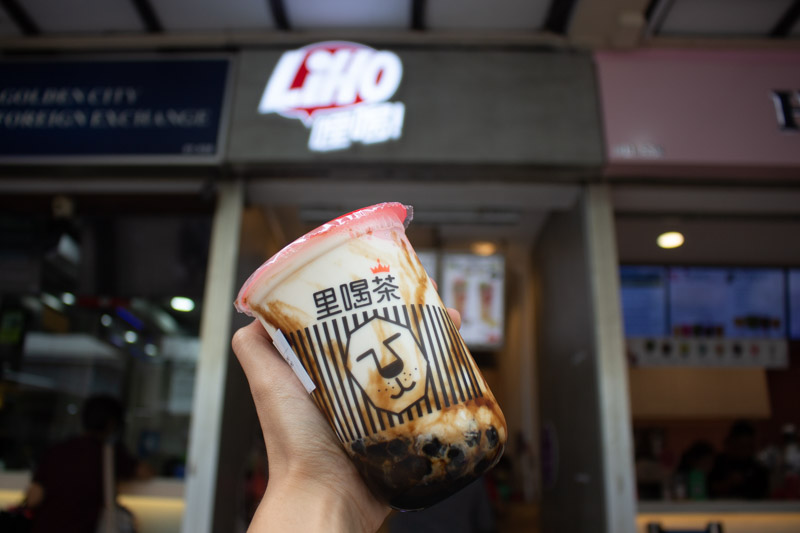 Surprisingly, despite most of the other local brands ranking badly in the list, LiHO TEA (S$3.60) was the shining star, coming in at a close second place. There was a general agreement that the milk was undoubtedly fresh and sweet; some even felt that it was almost creamy. There was a distinct brown sugar taste most of us appreciated, though a few remarked that it was a little too sweet.

The pearls had a nice bite to them — chewy and soft. Unlike some of the other brands on the list, the quality of the pearls had good consistency throughout and they were cooked evenly.

Losing by a slight margin, we all agreed that the more accessible and cheaper LiHO still makes for a good brown sugar fresh milk fix. Our crowned champion and the winner, is HEYTEA 喜茶 (S$4.50). With only two outlets, in Orchard Road and Clarke Quay, it’s not surprising to see queues forming for China’s most popular tea brand. 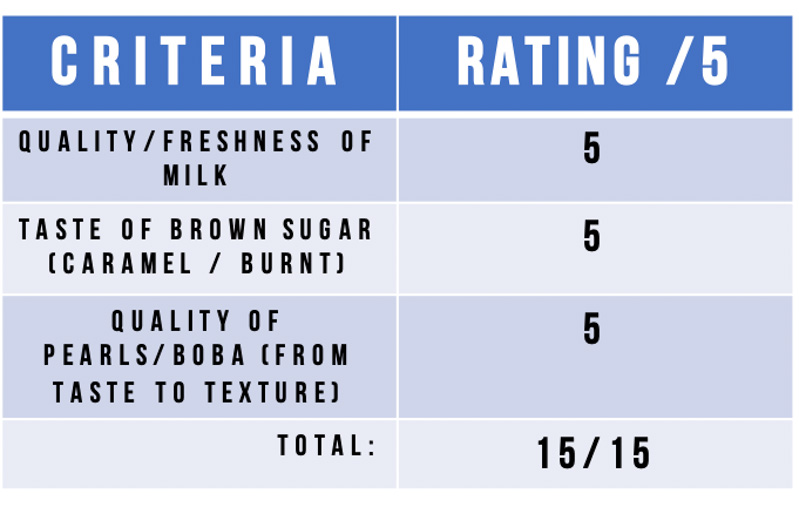 HEYTEA 喜茶 had a perfect score, with our team agreeing that it deserved a 5/5 for each criterion.

Most agreed that the milk was fragrant, fresh and creamy while the brown sugar taste was rather well-balanced. While most of us enjoyed the creamy aspect of HEYTEA 喜茶, one colleague found it a little too overwhelming for her liking.

The pearls were soft, chewy and flavourful. They definitely did brown sugar pearls justice.

Interestingly enough, HEYTEA 喜茶 and LiHO were initially tied. But after a second round of tasting, we unanimously agreed that the creamy aspect of HEY TEA has won us over.

Well, the team has spoken and we know how divisive bubble tea can get so don’t get too worked up if you disagree with us; we’re just a group of bubble tea enthusiasts figuring out which of the brown sugar series will get our money’s worth.

This post was not sponsored by any of the above-mentioned stalls, so rest assured you have an authentic review. We’d love to for you to share with us your favourite brown sugar fresh milk tea rendition of your favourite!

Previous articleCai Ji Wanton Mee 財記雲吞麵: Under-The-Radar Wonton Noodles Is The Best-Kept Secret In Bishan
Next articleTake A Trip To Winterfell With The Wanderlust Party At Propeller Bar This 24 May