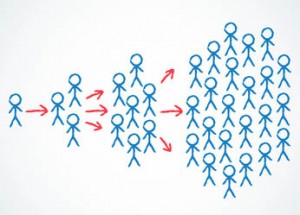 Viral marketing in essence, must aid your business goals instead of just being viewed by millions of people without adding a dollar into your business. A lot of marketing consultants try to use a 2nd rate product branded in the old ways, and create a viral marketing campaign and ads. For example, unbelievably realistic videos that look like it was filmed by an amateur are very viral due to its authentic nature. My favourite is this seemingly old film of Bruce Lee playing ping pong with his nun-chucks. This was done by Nokia by the way, and spread like wild fire. But what on earth did it do for the mobile business? An amazing video no doubt, but I’m pretty sure Nokia’s marketing return on this campaign was negative. Everyone wants their idea to go viral, but as businessmen it is utmost important to keep the profit goal in your sights at all times.

We can either try to create a marketing campaign of a product that spreads because of the ingenuity of the campaign itself (but not the product), or what I would recommend, is to build your product with viral marketing features from the very start. A product that people cannot help spreading like the plague. The most famous example would probably be the social network Facebook.

Why social media works is because utilizing network effects, its use spreads rapidly as a network is more effective the more users there are. Thus each user shares and spreads Facebook until their entire social circle has no choice but to embrace the product lest they want to lead an anti-social life. These days, Facebook has become not a need, but an expectation. We all have it because society expects us to have it. In fact, it has become downright embarrassing if someone asks to add you as a friend or wants to share something with you online, but you do not have the same medium as everyone else. That is the full power of Facebook’s viral marketing.

That however, is an extreme and rare case which I doubt any brand in the next 5 years is going to replicate, the closest comparison being Youtube. What I want to highlight is that building virality right from the start is much easier than trying to create a new viral campaign for your boring product.

Too many product brands concentrate on their features and widgets without stopping to ask “what is it about my product that people would want to talk about?” If you built the right foundation, it will be more message consistent, cheaper and simpler to get your marketing message viral.

Some ideas on how to make a viral product:

If you can achieve these criteria, your product is going to be well on its way to being a viral money making machine.