Chatuchak Singapore hosts more than 400 different vendors, with at least one-third of the vendors being flown in from Thailand specifically for this event. It’s slated to be around for three months, but it may be a permanent event depending on its popularity here. Individual vendors may change every two weeks to a month, so make your way down quickly!

Chatuchak Singapore will be held at The Grandstand South Carpark along Turf Club Road, from now till 3 May 2020.

With so many options available, choosing what to eat can be difficult. To make things easier for you when you visit, here’s a list of six must-try food stalls for your virgin Chatuchak Singapore experience.

Phad thai is a quintessential Thai dish hails from the province of Sukhothai, and is ruled one of the best of its kind in the country by OTOP, a local entrepreneurship stimulus program which aims to support the unique locally made and marketed products of each village all over Thailand, and seeks to provide both local and global platforms for these superior products. Having heard about the rigorous selection process that these vendors had gone through to be OTOP-approved, I was eager to see if Phad Thai Vanna‘s dishes lived up to my expectations and I ordered myself a plate of Phad Thai With Prawns (S$8/S$6 without prawns). 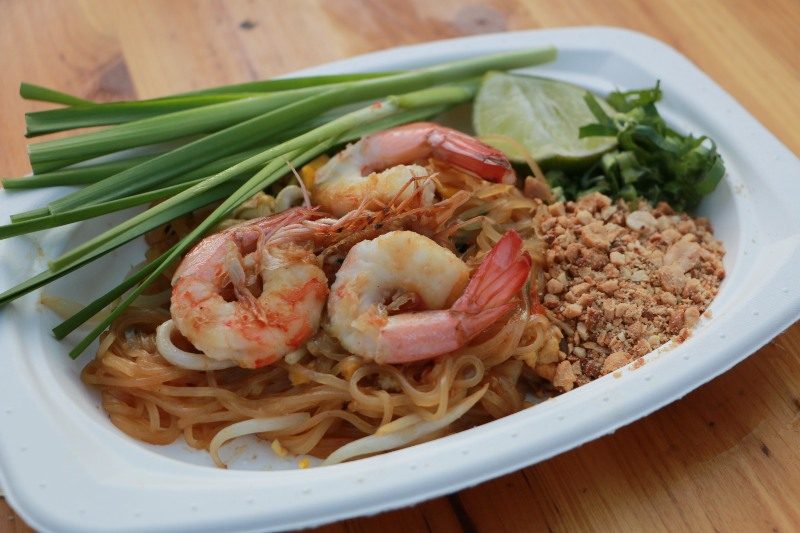 My first thought was that the portion of noodles given was quite small for S$8, but I appreciated that each plate came with banana shoots and lime. 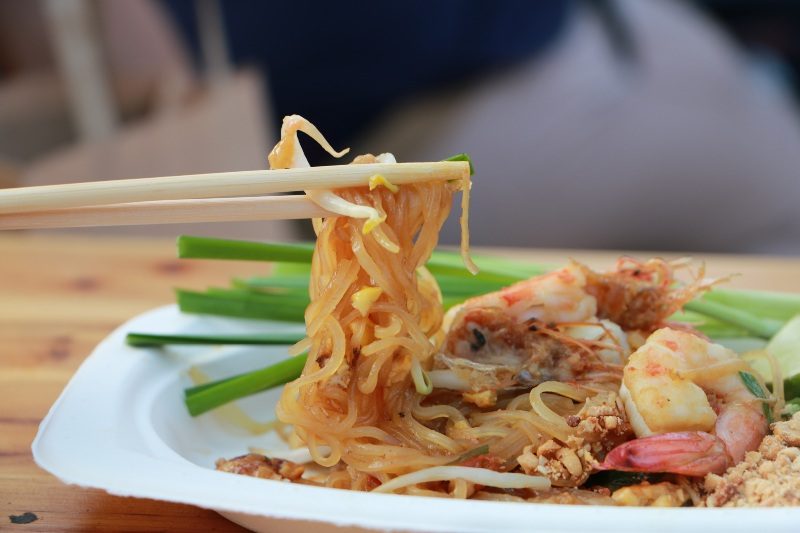 The noodles were springy and not too soggy, and the sauce was sweeter than I was used to for a phad thai but not overbearingly so. The salty nuts at the side offset the sweetness of the noodles and added a nice crunch to the dish. Although I’m not sure the three small prawns were worth the extra S$2, they were sweet and juicy, and I don’t think the dish would be complete without prawns. If you’re looking for some authentic phad thai that’s been Thai-certified, this is the stall for you. 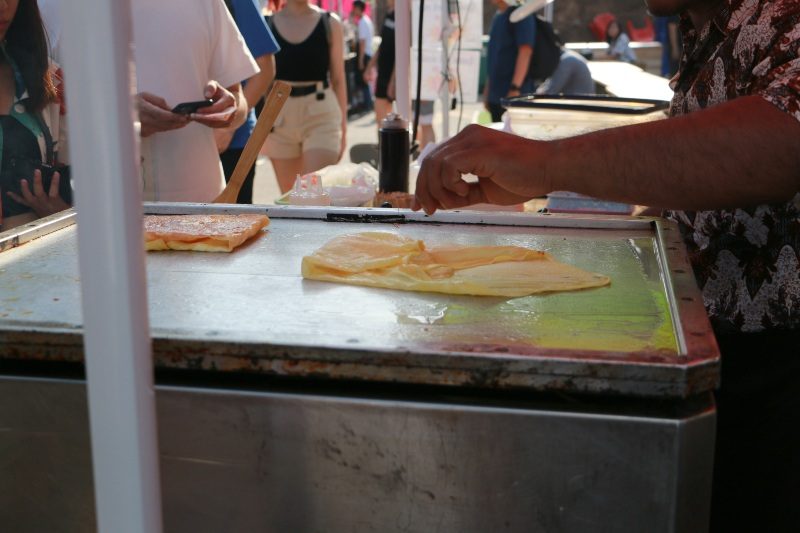 This is by far the most popular stall at Chatuchak, evident from the snaking queues that form within 30 minutes of the shop’s opening. At first glance, it may look like Khon Wanna (Thank You) Roti & Tarik just serves regular roti prata, but upon closer inspection, the dough for the roti is slightly thinner and more yellow. This tinge of yellow is a result of using eggs when making the dough, causing the end product to be lighter and chewier. I ordered the Banana Roti (S$5), which was their signature dish. The roti was freshly prepared on the spot using butter instead of oil, and cooked till golden brown. It was then drizzled with a generous amount of condensed milk and cut into tiny squares which made it easier for sharing. Biting into the Banana Roti, I noticed that the roti was very thin and soft. The sweetness of the condensed milk was mellowed out by the banana slices, which weren’t too mushy and added a nice bite.

Thank You Roti Shop is also OTOP-approved and their roti reminds me of dessert prata.

Sharing the same stall as the famous roti (Khon Wanna Roti & Tarik) is a special Thai vendor who incorporates the Malay pulling technique (tarik) into the making of his Thai Milk Tea (S$4). 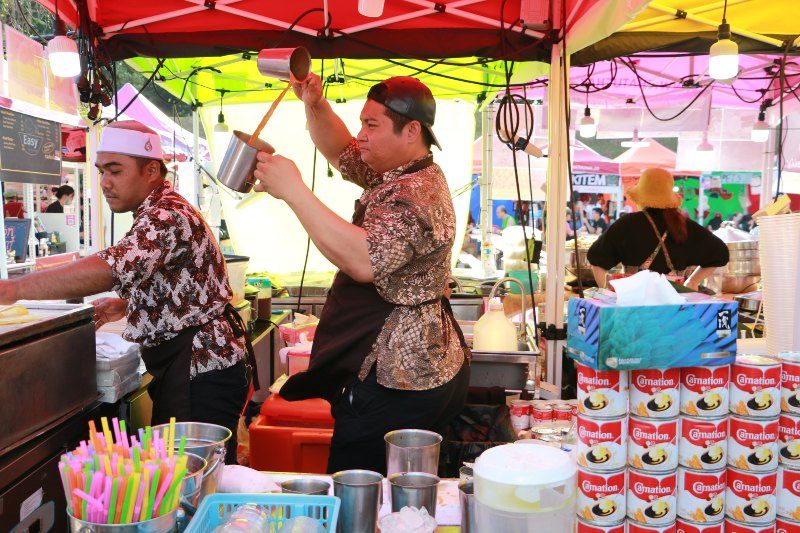 He often puts on a performance for his customers, spinning and twirling while pulling the tea—it’s definitely a sight to behold. The Thai Milk Tea “Tarik” retained its signature orange tint, and was accompanied with a thick layer of foam as a result of the pulling. The tea itself was sweet and each sip left me wanting more; it was quickly drained in Singapore’s sweltering heat.

Besides the classic, they also offer Thai Green Milk Tea, Coffee and Cocoa, all for S$4. King Octopus hails from Bangkok and they rear the octopus by themselves. Apart from having 10 outlets within the original Chatuchak market itself, King Octopus also own 20 franchises across Thailand, so you know they’re legit. 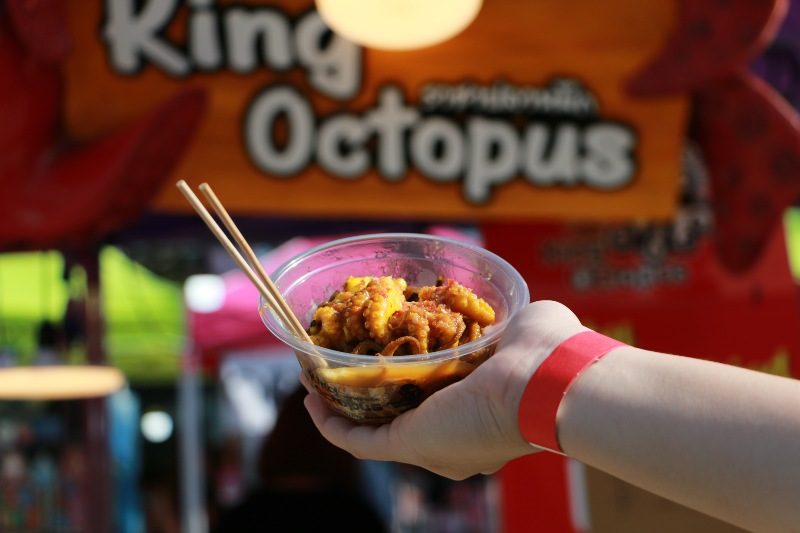 As its name suggests, Baby Octopus (S$13) chunks are grilled and doused in a lime chilli sauce, in bite-sized pieces that are easy to share. I didn’t find the sauce too spicy, and there was enough for each piece to be sufficiently coated with it. The pieces are tender and chewy, and you have your pick of both tentacles and head. Although the price point is a bit steep, this works great as a palate teaser before the main courses, and this is also one of the signature dishes from Chatuchak Bangkok.

This stall hidden in one of the back rows may seem unassuming, but it also originates from Thailand, and their speciality is Thai Crispy Pancakes. Sarinthip offers up to 11 different flavours of pancakes. One of their signature flavours is Yolk With Sugar (S$5 for six pieces), which is made out of thin egg yolk strips, giving it that vibrant orange shade. 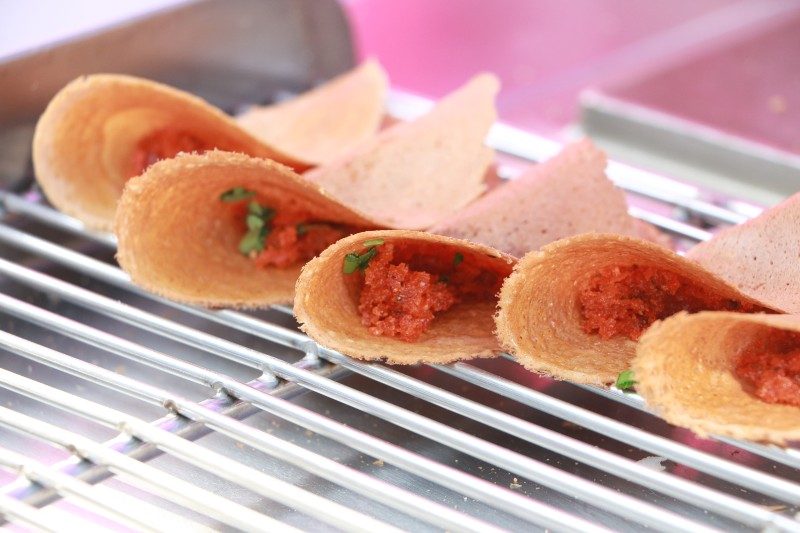 The pancake is thin and perfectly cooked, reminding me more of a mini crêpe. When I bit into the pancake, there was an audible crunch, followed by the sweetness of the yolk strips. The shell was crispy and sweet, which would also pair well with a salty filling. Appetiser or dessert—take your pick!

Yet another OTOP vendor, Thammaros Bee Farm sells a plethora of honey-based products, from honeycomb to 100% pure honey and even freshly-made drinks. They own an organic bee farm in the province of Chainat, and harvest the honey for themselves, producing up to 10,000 tons of honey a year! 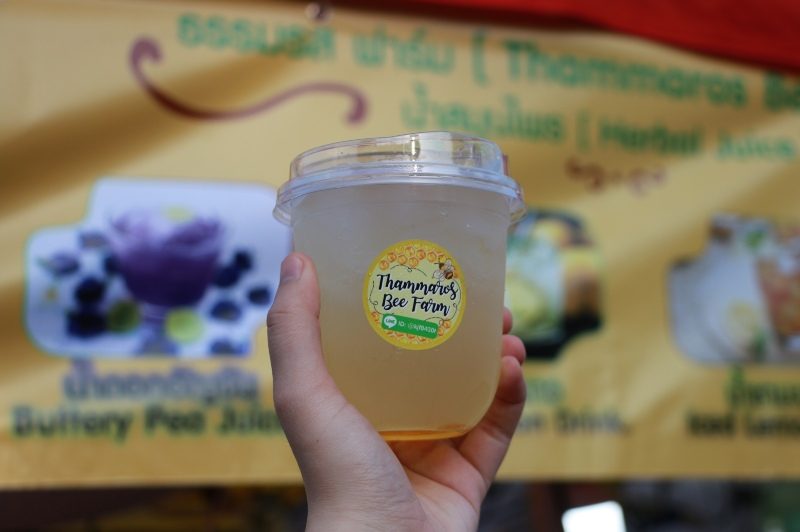 In hopes that it would quench my thirst on this scorching day, I ordered a cup of Honey Lemon (S$3). To me, it tasted more like sour plum juice, but it was refreshing nonetheless and I thoroughly enjoyed this ice-cold drink.

These are just some of the dishes in store for you at Chatuchak Singapore, and there are loads of other vendors serving local and Thai cuisine, as well as retail stores selling fashion items and accessories.

Head on down earlier to avoid the queues, and make sure you go with an empty stomach!