I’m a huge fan of cheese, and I may have found my new fix at Cheese Addiction. This hipster raclette cheese kiosk has made its way to the basement of Century Square at Tampines!  Once I was near the kiosk, I could smell the mouth-watering aroma of melted cheese. Cheese Addiction is a takeaway kiosk which serves a selection of Japanese-Western side dishes. The snacks are topped with a blanket of raclette cheese, which they scorch upon order.

Each dish is then sprinkled with black pepper and sesame seeds, making it the perfect Insta-worthy shot. The first dish I had was their Raclette Tori Karaage (S$6.90), which came with the side of baby potatoes. Cheese Addiction deep fries their karaage until golden brown and crispy, before topping it with a layer of melted cheese. 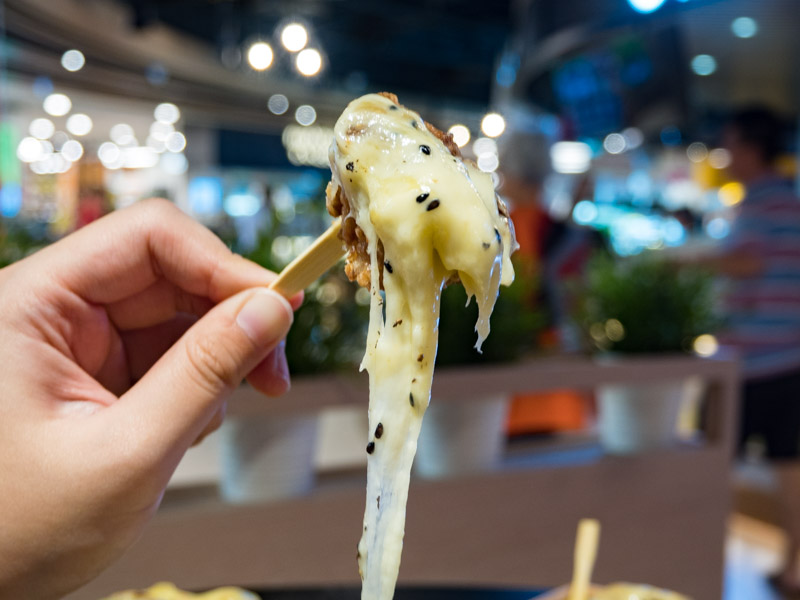 The long cheese pull really impressed me! The meat was bursting with juices, and the savoury and fragrant garlic opened up my appetite. The meat was so tender that it broke apart with ease as I bit into a piece and it made me want to inhale the rest of the karaage. For a greater variety, I tried Cheese Addiction’s most popular dish, the Raclette Mix (S$7.90). This dish included most of the sides available at the kiosk, including baby potatoes, chicken cocktail sausage, chicken meatballs, ebi fry, and tori karaage.

I did enjoy the baby potatoes, which were cooked in their delicate jackets. Fluffy on the inside, each bite filled my mouth with their natural creamy sweetness. If you are not a fan of raclette, Cheese Addiction also has other mains such as their Penne and Cheese (S$5.90), which is similar to mac n’ cheese.

However, I couldn’t really taste much of the mild cheese atop the al dente pasta. In addition, there was only an occasional hint of salty and smoky flavour from the bacon bits mixed in with the penne. Another popular dish is their Okonomiyaki Cheese Fries (S$4.90). The thin and crispy fries complemented the bonito flakes and seaweed slices. This dish was an acquired taste and up until now, I am still unsure about how I feel about it as there was a variety of flavour packed in one dish.

I was hit with a strong umami flavour from the bonito flakes in the first mouthful, and the cheese sauce only surfaced as an aftertaste, which I did not enjoy as much as I would prefer it to be cheesier. 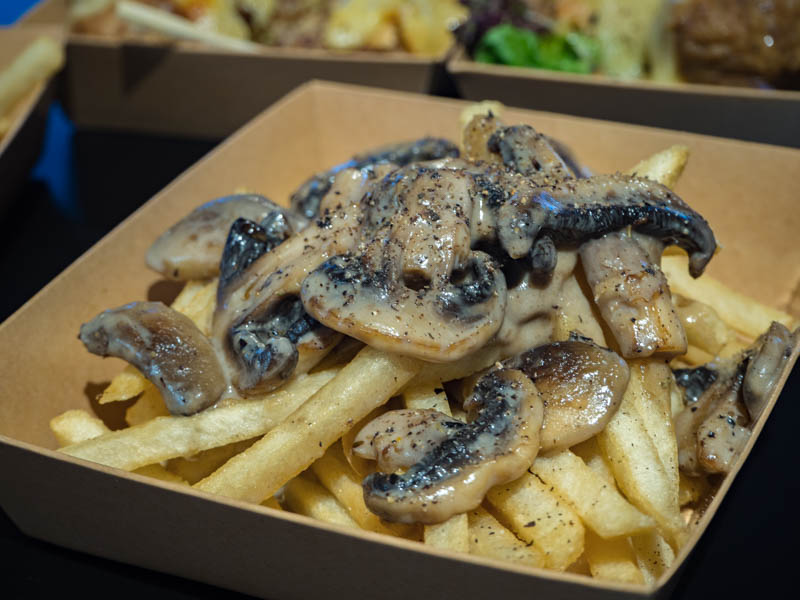 Psst, Cheese Addiction has recently launched their new menu, which includes Furikake Cheese Fries (S$4.90) and Mushroom Fries (S$6.90). I tried their Mushroom Fries which was different from the rest of their menu as it doesn’t have cheese.

Even though the mushrooms and fries weren’t cheesy, they still had a rich creamy flavour which tasted like a comforting bowl of mushroom soup.

As much as I love cheese, the raclette cheese and their deep-fried side dishes were a tad oily. The rich flavours were also too much for me, so I felt quite jelak after a few bites.

Nevertheless, I would recommend Cheese Addiction’s Raclette Tori Karaage. This meaty dish had a rich aroma which I enjoyed more than the others on the menu. And the best way to enjoy these cheesy dishes is to have it while it is hot and gooey.