The minute I walked up to Chef Kang’s Prawn Noodle House, I noticed the long queue waiting for the restaurant to open, and I was instantly taken aback. Not only was it only 9.45am in the morning, Chef Kang’s Prawn Noodle House only sells two dishes—prawn noodles and hot stone rice—and I was in disbelief that crowds would queue for these dishes at such an early hour.

Prawn noodles isn’t even a typical breakfast dish! Could it really be that good? It was only when I learnt that Chef Kang only cooks up 200 servings of prawn noodles a day did I understand why there was such a throng of people waiting eagerly for the shop to open. For those who are unfamiliar with Chef Kang, here’s a short backstory.

He used to cook for Lei Garden, Canton Wok, and Canton Recipe House, and then he branched out to start his own restaurant in 2015—Chef Kang’s, a quaint zi char restaurant in Little India, that won a Michelin star in 2017. Then, he opened Chef Kang’s Noodle House in Toa Payoh which specialises wanton mee, and it won a Michelin Bib Gourmand in 2019.

In October 2019, he decided to open Chef Kang’s Prawn Noodle House, just a few streets away from his wanton mee stall, to sell prawn noodles with prawn paste spare ribs. 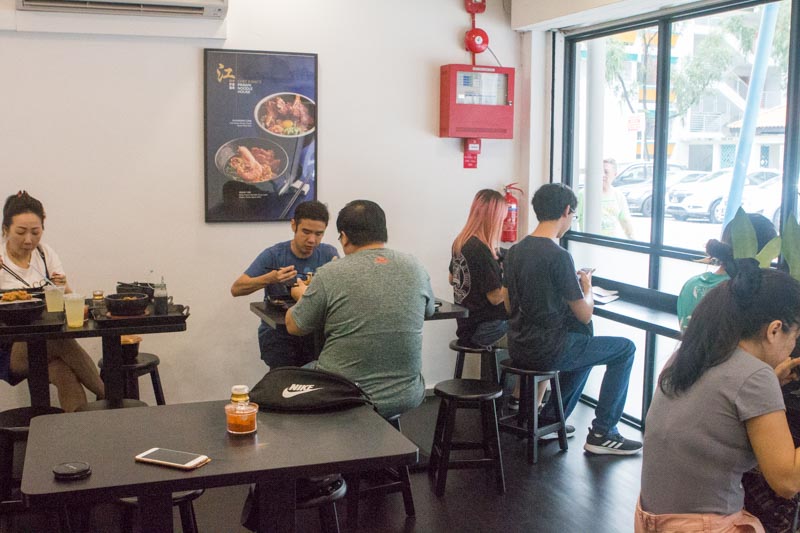 Chef Kang’s Prawn Noodle House is humble and cosy, and can sit up to 25 people comfortably. Each table has a bottle of chilli powder and white pepper powder, which are both undeniably the perfect condiments for prawn noodles. 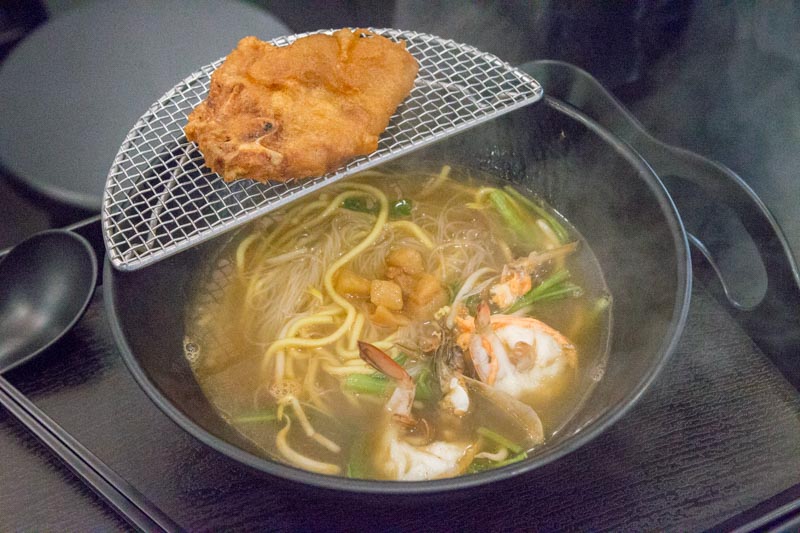 The King Prawn Noodle Soup With Prawn Paste Spare Ribs (S$10) came to us so hot that it had steam billowing up from the bowl of noodles. It came with a generous amount of noodles, kang kong, prawns, a tiny mountain of pork lard, and a piece of prawn paste spare ribs.

Do note you can only pick yellow noodles and/or thin bee hoon for this dish. Chef Kang’s prawn noodle soup was teeming with briny goodness, and it was rich and sweet without being overly salty. I could taste that there were no artificial additives or flavours, and all that intense sweetness really came from its overnight prawn stock.

When I asked Chef Kang how long he boiled his stock for, he said he boiled it for 16 hours, and only uses prawn heads and shells for a pure, umami flavour. The prawns were a little disappointing because the flesh was slightly soft and mushy, as if it had been over-boiled or steeped in liquid for a long period of time.

Despite that, I was grateful that they had served the prawns sliced in half, so it was easy for me to dig out the meat. However, the prawn paste spare ribs were easily the hero of the entire dish. The minute I bit into it, my colleague exclaimed: “Wah, I can hear the crunch!”

Though the spare ribs were battered until it was thinner than I’d like, it was packed with savoury and salty flavours, just like a regular prawn paste chicken, but in the form of spare ribs. The meat was soft and tender, while the crust on the outside was paper-thin and super crispy.

I could’ve finished two or three prawn paste spare ribs by myself because it was that good but alas, this bowl of prawn noodles only came with one slab. Once I drizzled a bit of black sauce on the rice, I started stirring everything together and heard the beautiful sound of crackling and sizzling rice. It made my tummy growl and I couldn’t wait to dig in! The pork lard was one of my favourite parts of the dish. For the record, I don’t usually eat pork lard because it tends to be too oily and leaves me feeling nauseous, but Chef Kang’s pork lard was absolutely delicious.

It was salty and crispy, and bits of it melted in my mouth like soft butter. I could also taste a strong wok hei taste, followed by a tinge of smokiness, which could’ve only come from an experienced chef who knows how to handle a wok with skill.

Each bit of rice was gloriously charred and crispy—just like what you’d get with claypot rice—and I loved how well it went with the salty pork lard and springy egg.

Despite the fact that Chef Kang’s Prawn Noodle House only sells two dishes, he still garners a decent crowd and sells out by 1pm every day. After trying his prawn noodles and hot stone rice for myself, I can see why people would queue even before the store officially opens. The dishes are simple but wonderfully executed, with a good balance of flavours and textures that will leave you satisfied and wanting more.