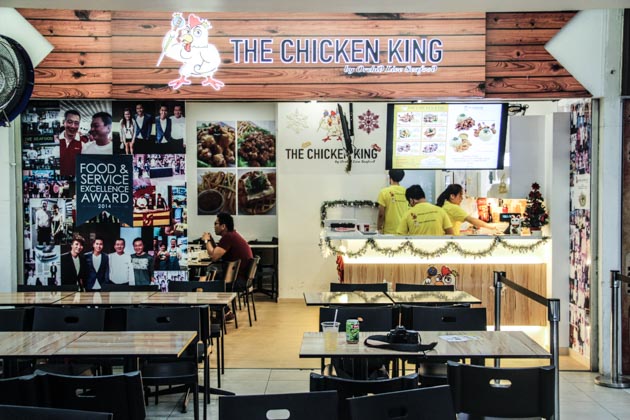 Opened by the same folks behind Orchid Live Seafood, The Chicken King serves arguably the best fried chicken in Toa Payoh. Nestled in the busy neighbourhood hub, this is for sure a hidden gem.

The now retired chef Steven Chua who founded Orchird Live Seafood has also bagged the Food & Service Excellence Award amongst many other accolades in his prime celebrity chef years.

In recent times, Chef Steven’s son, Jason Chua has now taken over the mantle and manages the business. 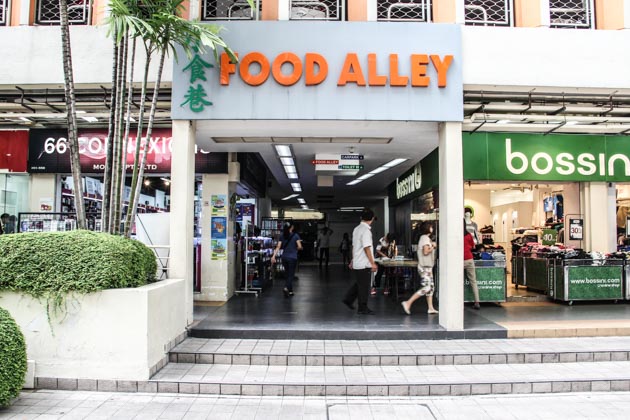 Like I mentioned, Chicken King is a hidden find – you really need to spend some effort finding it. To make things simpler, Chicken King is located in Food Alley behind the shops at the front, near Gong Cha and the Money changer. Walk in and make a turn to see this non-discreet shop at the corner. 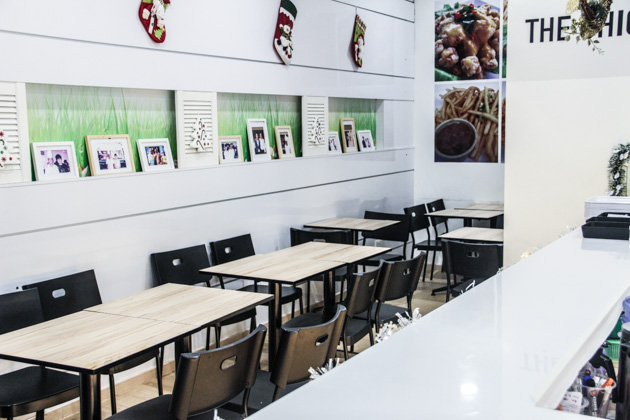 The interior seats about 18 people, while there are also outside seats that can accommodate larger groups as well. It’s an extremely casual place which fits the purpose of just having good fried chicken, so don’t get your hopes up for some romantic rendezvous here. 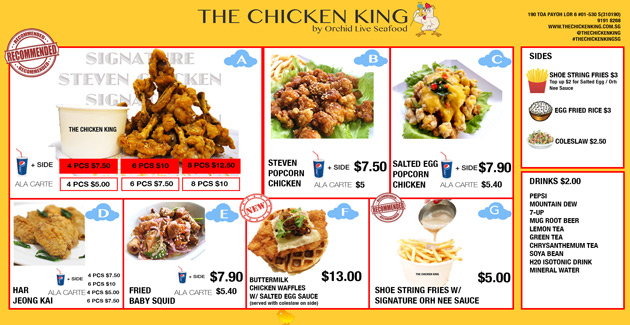 I like how the menu is pretty straightforward and concise so you don’t have to rack your brains to decide what to eat. If you’re hungry, get a combo which comes with a drink and 1 side dish for $2.50 more. 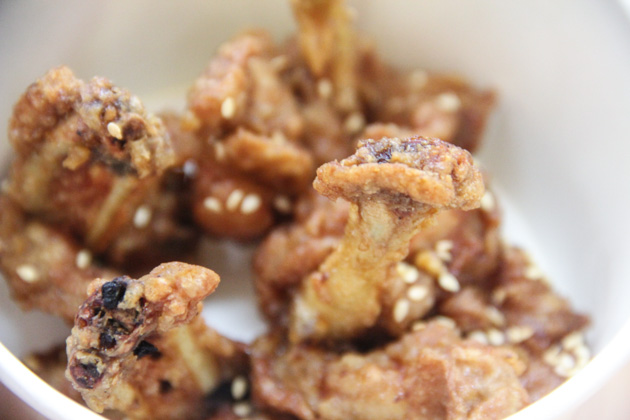 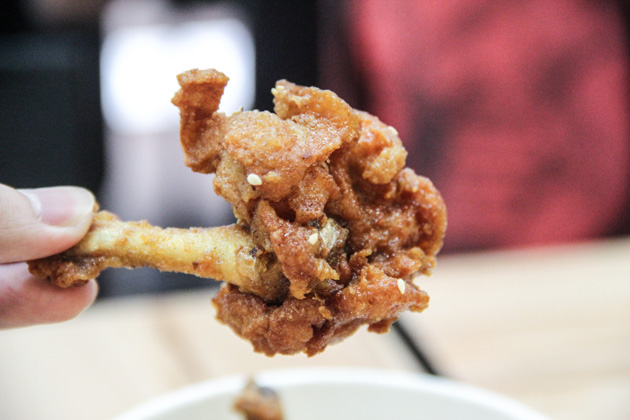 Steven chicken is named after Chef Steven, the one and only founder himself. The chicken meat is carefully pulled from the bone to the ends and allow customers an even easier time eating chicken wings.

The chicken has a subtle sweetness, packed with savoury shoyu flavour and was reasonable moist. The chunky meat also packs a good bite and is definitely a great locally invented version on par with its Korean counterparts. 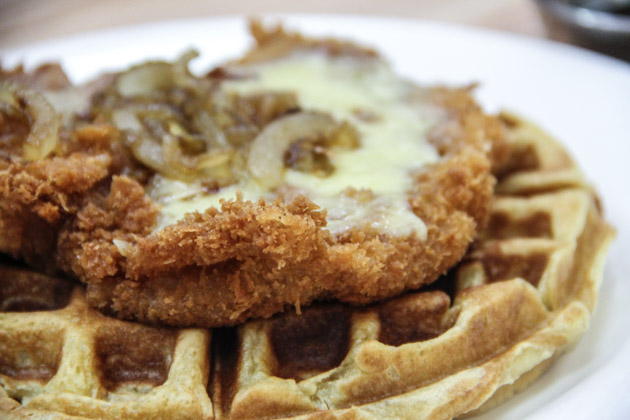 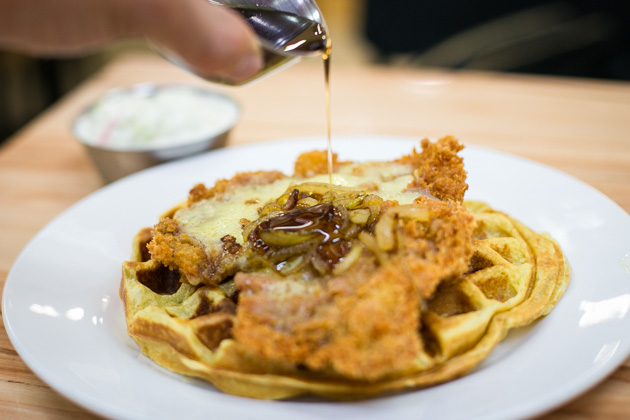 An American Soul food inspiration, Fried chicken and waffles makes a new appearance at Chicken King, now with salted egg sauce too. The melted cheese goes well with fried chicken without a doubt, alongside with some sauteed onion. Drizzle some honey or salted egg sauce over it to break the monotony of the heavy waffles and chicken combo with a zing of Singaporean flavour.

The waffle remained crispy even after 5 minutes of photo taking, testament to the good batter structure. 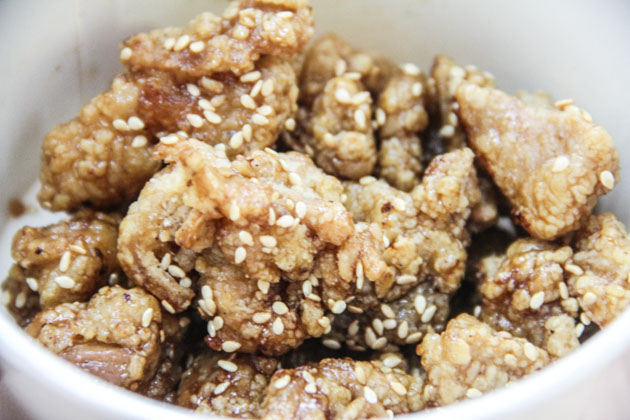 This dish is the same as Steven Chicken in terms of seasoning, just that it is in the form of boneless Popcorn Chicken pieces. This was a tad drier compared to the Steven Chicken though due to the cut used, but the seasoning coats the entire chicken morsel more evenly. Popcorn chicken drizzled with all the luscious salted egg sauce. Take my money already. Salted egg sauce was of course the highlight – moist, creamy and slightly spicy to prevent it from being too jelat. Addition of chili padi gave a spicy overall while the curry leaves added on to the fragrance and had multiple layers of taste. This shrimp paste fried chicken is usually found at local zhi char restaurants, so we had to give it a try since it’s on the menu. Good batter with a crispy skin packed with heavy prawn paste flavour (which borders on pungent for some).

As you tear open the piping hot piece of wing, a welcome sight of juicy meat is revealed along with the musky scent of shrimp paste. 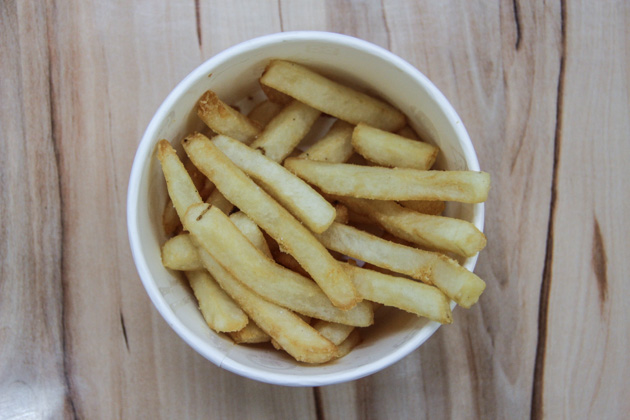 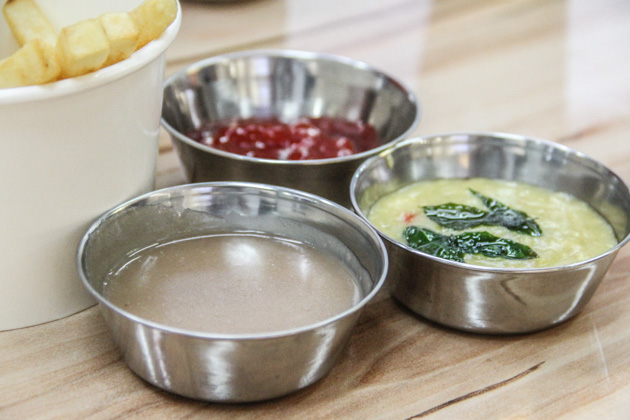 Fries weren’t too soggy, which is my preference. You can add an optional top up of $2 for Orh Nee (Yam) or Salted Egg sauce, which I would highly recommend.

The teochew yam sauce wasn’t overly sweet and is present because of the chef’s teochew roots – a unusual pairing that seems to work. The starchy yam compliments the thick potato fries well to my surprise.

I’ve already raved about the creamy salted egg sauce which goes equally well with the fries. 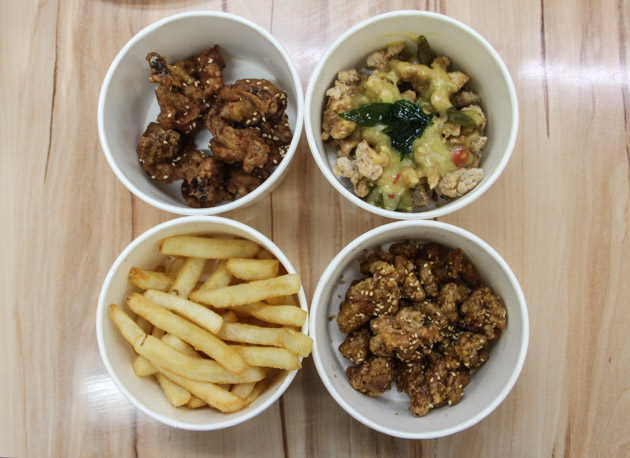 Yes, it’s not as cheap as KFC, but The Chicken King shows more effort in preparing their chicken and the local flavours of salted egg and yam paste is not something you can replicate in a fast food joint easily.

Seeing as its a coffeeshop setting, don’t expect fine-dining service for this price, but the food is definitely worth it.