Ghim Moh Market & Food Centre has no shortage of good hawker food, many of which have seen growing fanbases throughout the years. One such stall, Chuan Kee Boneless Braised Duck, has been at Ghim Moh for the past 10 years and its best-selling duck rice, noodles and porridge was just awarded the Michelin Bib Gourmand for two consecutive years in 2018 and 2019! 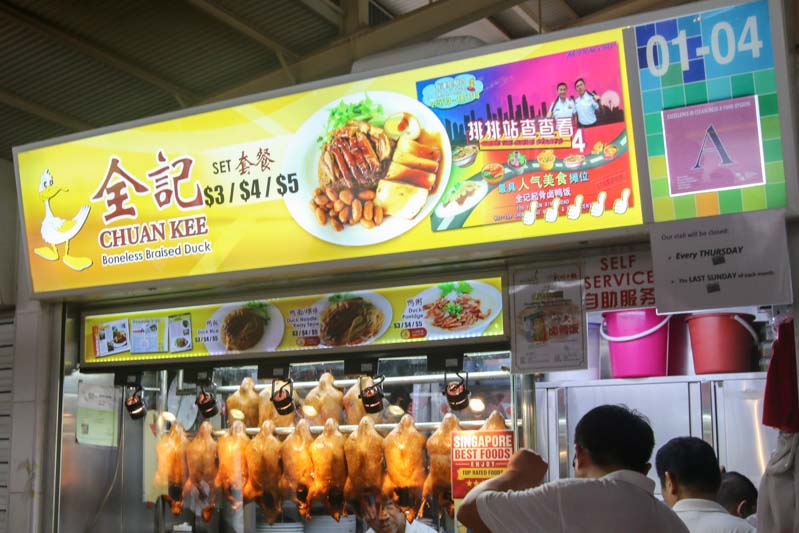 It only has three items on its menu: Duck Rice, Duck Noodles/Kway Teow and Duck Porridge, all of which are priced at S$3 (small), S$4 (medium) and S$5 (large). 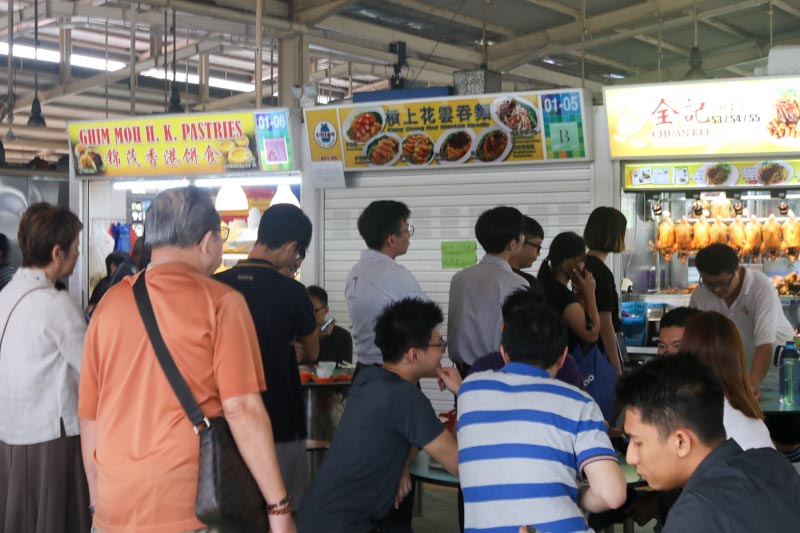 When I visited Chuan Kee for lunch on a weekday, I actually spotted the queue first before I saw the storefront—that’s how long the queue was. It even extended past the hawker centre’s border and onto the main street.

Thankfully, the line seemed to move pretty quickly, so I got to place my order within 10 minutes. 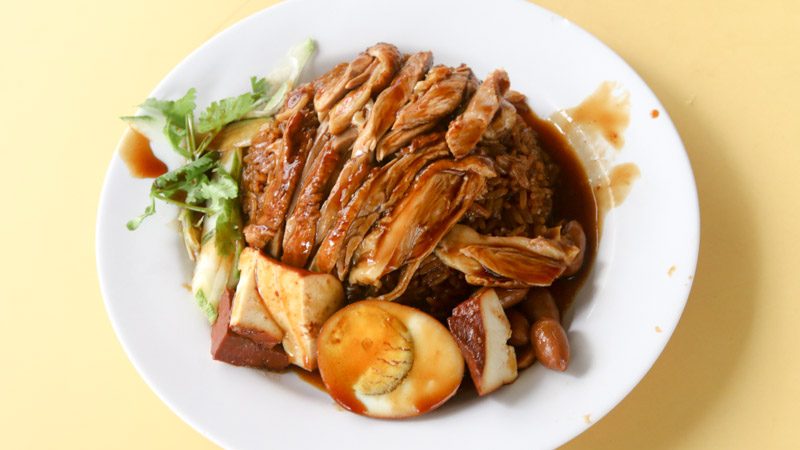 I got the Duck Rice Set (S$4), which came with a mound of rice, sliced duck, cucumbers, tau pok, half an egg and braised peanuts. It also came with a bowl of herbal soup. 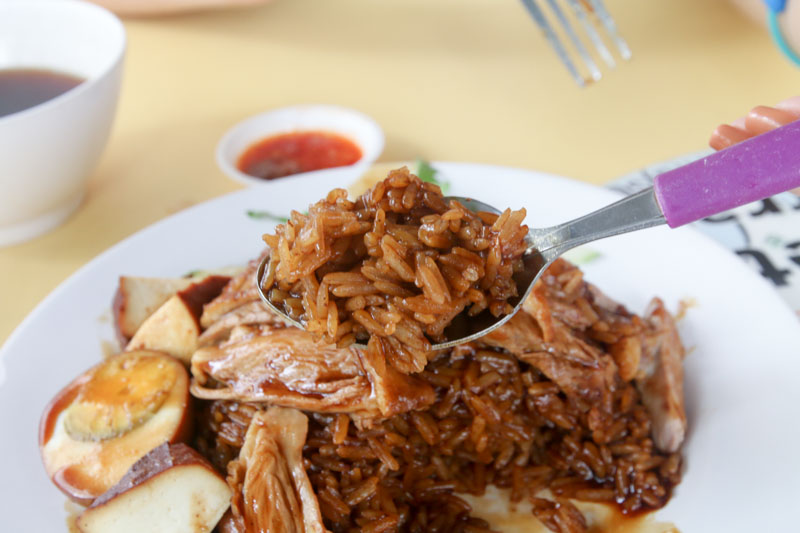 While the rice looked promising, with its dark brown hue, its flavours were lacklustre. I wished it had more salt or oyster sauce, or that it had been topped with fried shallots, which would give the rice an additional roasted nuttiness. 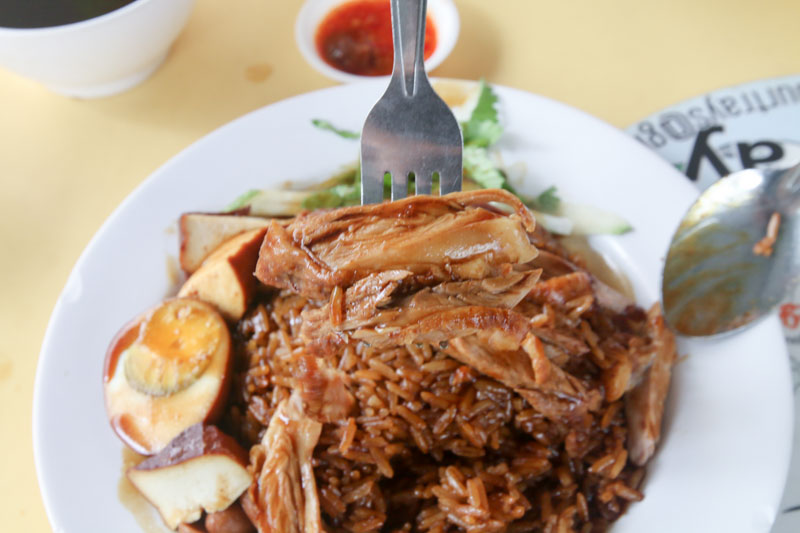 However, all it took was just one bite out of Chuan Kee’s braised duck meat and I instantly understood why it was so popular.

The duck meat was sliced thinly, but it was still springy, juicy and soft. There was just the right amount of fat to meat, so every mouthful had a good amount of tender meat and gelatinous fatty skin. 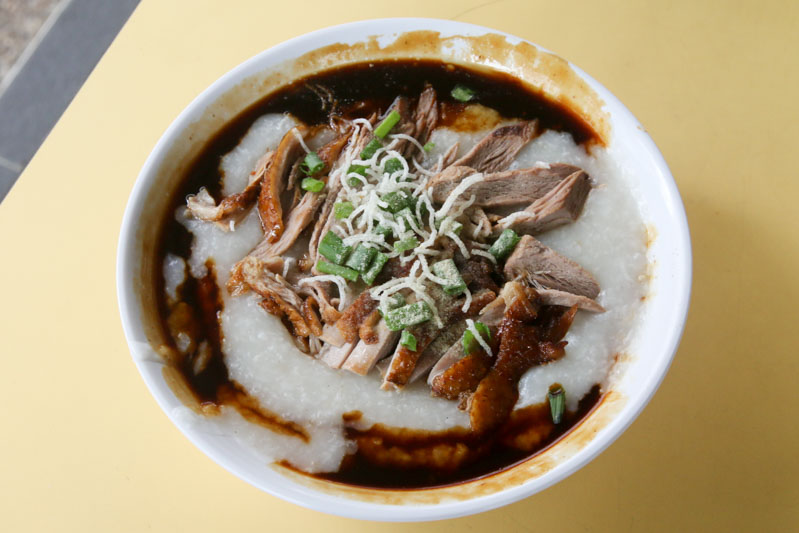 Give the porridge a good stir so that the dark sauce is mixed thoroughly with the thick congee. Just like Hong Kong-style congee, Chuan Kee’s porridge was thick and comforting—just the kind of congee where you’d expect to find a raw egg or century egg.

The rice grains had been cooked until they were on the verge of breaking into tinier pieces, and as a result, the porridge had this velvety smooth texture to it.

Oddly enough, though the dark sauce looked lethally salty, it only added a subtle umami touch to the porridge. Plus, the spring onions were crunchy and minty, and helped ease through the thickness of the porridge. After giving the noodles a good mix, I realised that there was actually just the right amount of noodles to soup, such that I’d alternate between a slurp up a mouthful of yellow noodles and a sip of the earthy soup. The noodles also came with a spoonful of chilli, which I mixed directly into the duck soup. 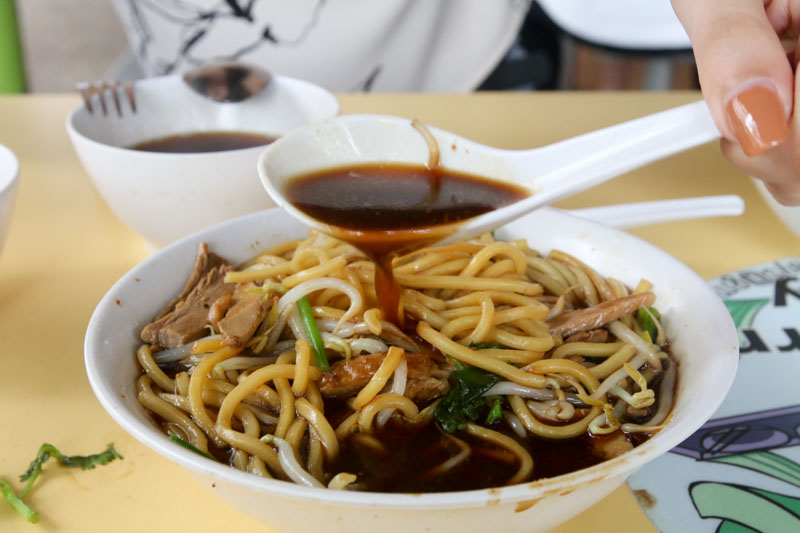 While the noodles themselves were pretty ordinary, I absolutely loved the soup. It was intensely flavourful, robust and full-bodied, with an underlying herbal taste that gave it a refreshing kick.

The chilli gave the soup a richer texture, and a tangier, more fragrant, and mildly spicy aftertaste.

If you ask me, I could drink the soup alone and I’d be pretty satisfied.

My dining companion and I wiped all three plates clean despite having another tasting to go to afterwards—it was that yummy. I also loved it that Chuan Kee’s dishes were all priced affordably, between S$3 to S$5. The duck rice even came together with the set so you’d get a mix of everything in just one single plate.