When I think of churros, it always brings me back to the bustling sounds of theme parks and the sweet cinnamon aroma drifting from the churros cart.

If you don’t feel like going to a theme park, Churreria La Lola, a Filipino-Spanish cafe at Clarke Quay, is serving up a selection of freshly-made traditional churros. Opened since late-2014 in the Philippines, the new outlet at Clarke Quay is their first international venture.

Good things are definitely worth waiting for, especially when it’s the golden and crispy churros from Churreria La Lola. Upon order, they deep fry the dough in 100% olive oil, and each strip of fried dough is also made with a combination of premium ingredients. Their churros came in a box with two holders at the side so that busy diners can leave the dips in the holder. That means you can walk and eat at the same time!

It’s been a while since I’ve had proper churros, so I was really excited to start this sweet adventure with their Classicos Churros. I was impressed by how the olive oil infused into the dough to create a mouthwatering deep-fried aroma. The churro was hot and crispy, and with every bite, there was a crunchy texture from the sugar crystals which coated the stick. Luckily, the churros came in a bunch so I could try out the different dips. The first dip I tried was Churreria La Lola’s Signature dip, which was made with melted milk chocolate. Dipping the churros into the milk chocolate intensified the sweetness of the whole snack. 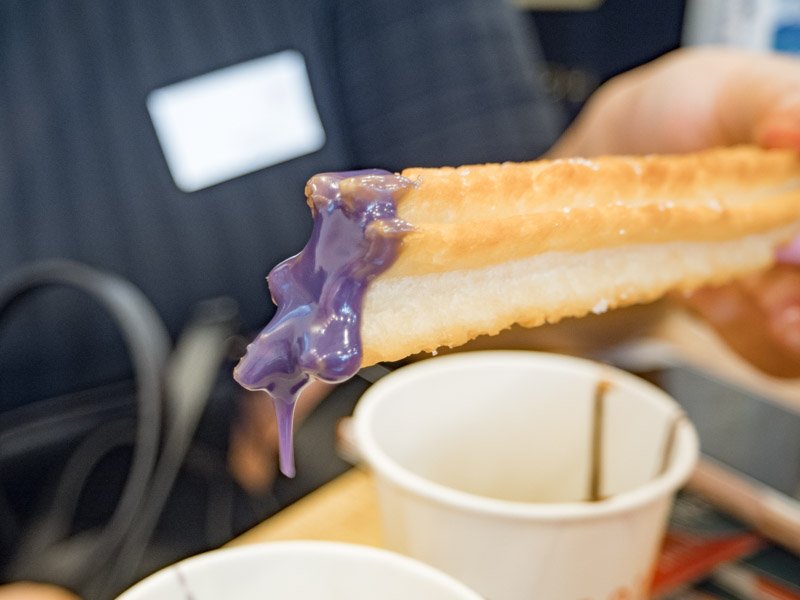 Ube (purple yam) is a common ingredient in Filipino desserts, and since Churreria La Lola originated from the Philippines, they had to include the Purple Yam dip.

This purple yam dip reminded me of the traditional Teochew dessert, Orh Nee (yam paste). I enjoyed this dip a lot as it wasn’t as sweet as the milk chocolate dip, and it added a combination of vanilla and nutty flavours to the churros. For all you cheese lovers, Churreria La Lola has a flavour exclusive to Singapore: Cream Cheese. Even though I love cheese, I did not enjoy this as much. The cream cheese dip had a rich milky flavour, which became too overwhelming after a few mouthfuls.

Unfortunately, I did not have a chance to try Churreria La Lola’s Assorted Mix (S$8.50/3pcs, S$9/6pcs, S$12.90/12pcs, S$16/18pcs). This came in a variety of flavours, and the churros were coated with  Dark Chocolate, White Chocolate, Matcha or Strawberry dips. If you’re looking for something sweeter than the Classicos churros, make sure that you give this assorted mix a try. Churreria La Lola also serves Xuxos (S$8), which are churros stuffed with a choice of Nutella, Dulce de Leche (Spanish caramel) or Banana Nutella. They even have Pork Floss Stuffed Xuxos, a savoury version that’s made especially for our local palate. Inspired by the well-known bakery BreadTalk, Churreria La Lola made their Pork Floss Xuxos both sweet and savoury. Each churro is filled with a homemade garlic aioli, topped with pork floss and mayonnaise.

The overpowering garlic flavour filled my first mouthful, though the pork floss also gave a slight sweetness to it. I found this unique churro concoction quite interesting but it would taste better with a milder garlic aioli. Feeling thirsty after the churros? I tried Churreria La Lola’s Yakult Iced Tea (S$6.50) which can only be found at their Singapore’s branch.

This was a blend of their special brewed tea combined with Yakult and ice. I expected the drink to have an overpowering tea flavour like traditional iced teas, but it tasted mostly fruity. This Yakult drink was so refreshing, which is perfect for a hot day in Singapore.

If you’re looking for sweet treats, head over to Churreria La Lola for some traditional Spanish churros. I would definitely go back for the Purple Yam dip, because I don’t usually see this flavour.

It’d be better if they sold their classic churros with cinnamon sugar too, so diners can indulge in churros like they’re in an amusement park. Have A Blue Christmas With Rumah Rasa’s Blue Bird + Indomie...