Dishing out piping hot bowls of prawn noodles from as early as 7.30am, Da Dong Prawn Noodles can be found at the cross-junction between Marshall Lane and Joo Chiat Road.

This humble little nook is managed by a trio of guys, all in their early 30s, who are second-generation hawkers in their own right. The current boss? 31-year-old Watson Lim. With more than half a century of history, Da Dong Prawn Noodles was founded by the late Mr Lim Kim Khoon, Watson’s father, in 1966.

In 2018, Watson left the corporate world to pick up his father’s ladle and continue the family’s prawn noodle business. 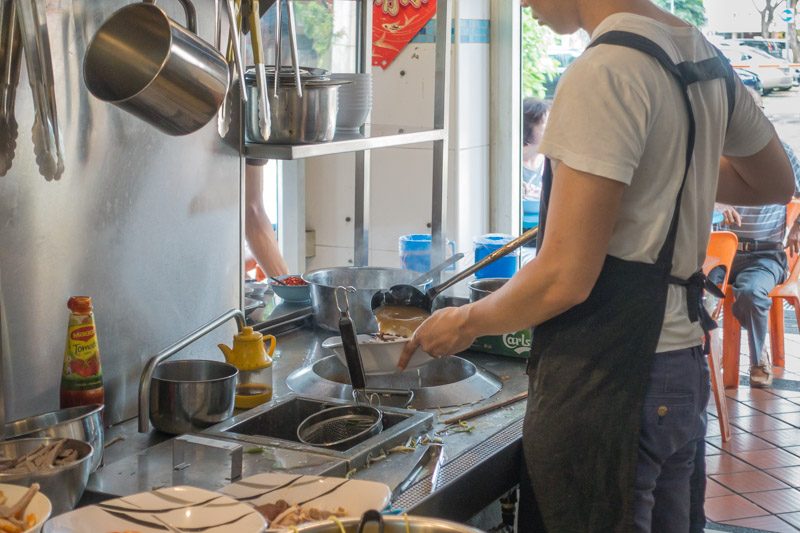 But Watson is no greenhorn in the industry; in the past decade, he has taken time off frequently over the weekends to help his father run the family business.

It was through these weekend stints that he learnt the ropes of concocting the luscious prawn noodle broth, frying up aromatic lard, and preparing the potent prawn noodle chilli from his father. 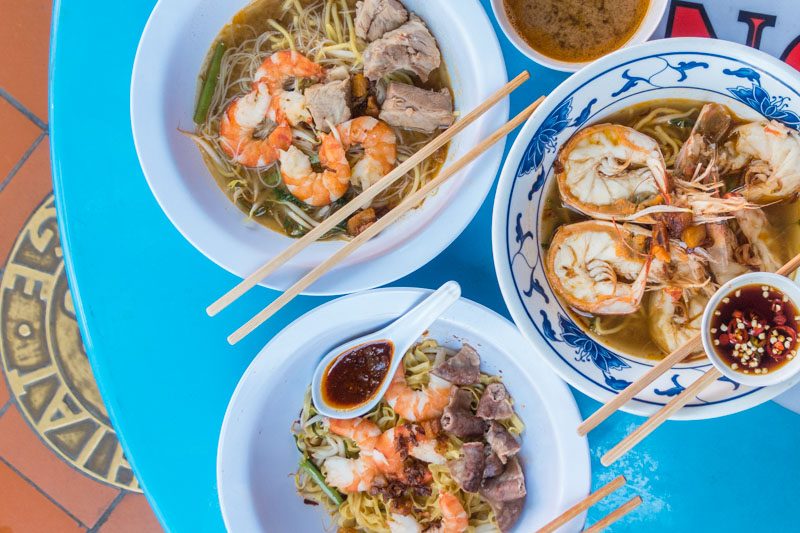 Today, Da Dong Prawn Noodles is often crowded on weekends and during lunch hours on weekdays, a testament to all the experience Watson gained from his hard work with his father in the past.

The 31-year-old has not only proved his mettle to the stall’s regular patrons, but has also won the hearts of many first-time customers, myself included. I went for the large version of the stall’s signature Big Prawn Noodles (S$15), which is definitely a dish worth ordering. Hefty price aside, the bowl came filled with two and a half pieces of succulent red leg prawns, a modest serving of yellow egg noodles and crispy lard. 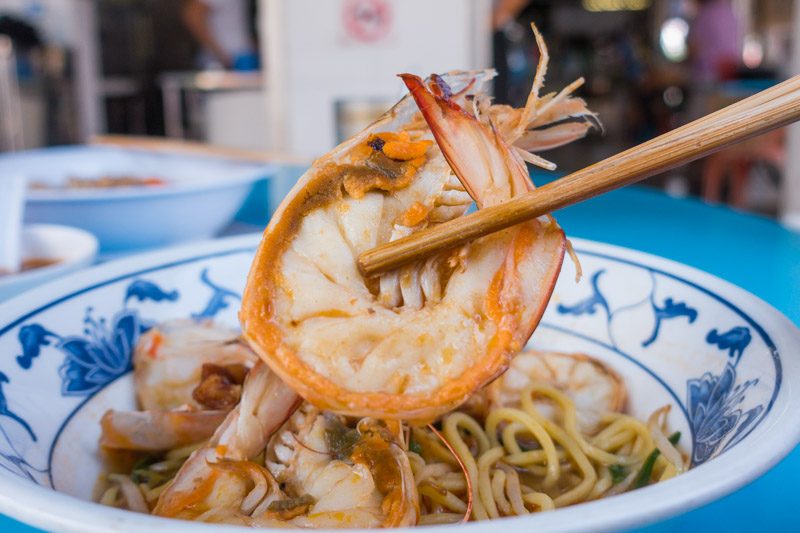 The massive prawns, which had a sinful amount of creamy prawn gonad, were really juicy and left me wanting for more after each bite.

Yet, the crustaceans were not the star component. The soup, a potent concoction of prawn and pork stewed over long hours, was the highlight. Rich, hearty, and sweet, the broth ladled into each bowl was only enough to sufficiently soak the noodles.

Unfortunately, I was not allowed to ask for second-servings of the soup, which was the only downside to my meal. 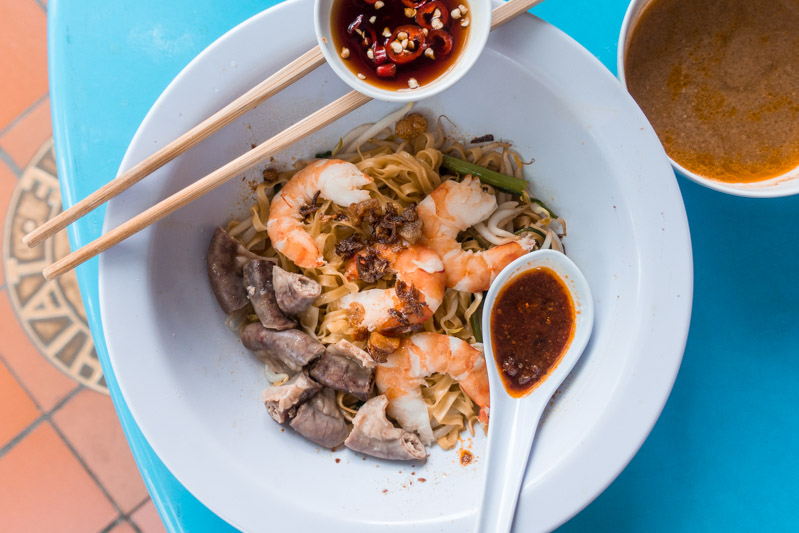 One of my lunch companions ordered the dry and mee pok variation of the Pork Intestine Prawn Noodles (S$10), which came with two pieces of tiger prawns, some pork intestine and was garnished with shallots and lard.

Sharing is caring, so of course I got to try a bite. 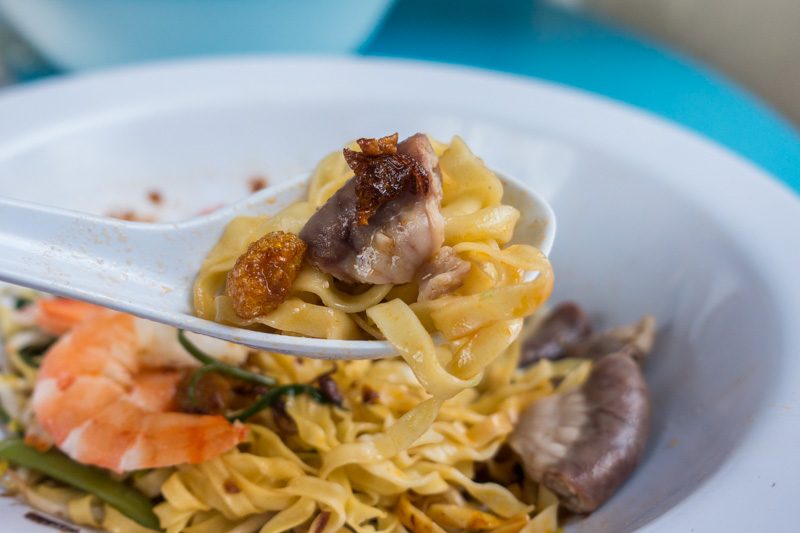 We both agreed that we enjoyed the chewy texture of the pork intestine. Although not as large as the red leg prawns of the Big Prawn Noodles, the prawns in this dish were equally tender and sweet.

In this non-soup variant, the homemade chilli and the crispy lard really stood out. With subtle hints of garlic and dried shrimps, the chilli paste was aromatic and delivered a fiery kick, albeit being slightly salty. The latter was fried to golden-brown perfection and had a melt-in-the-mouth texture. 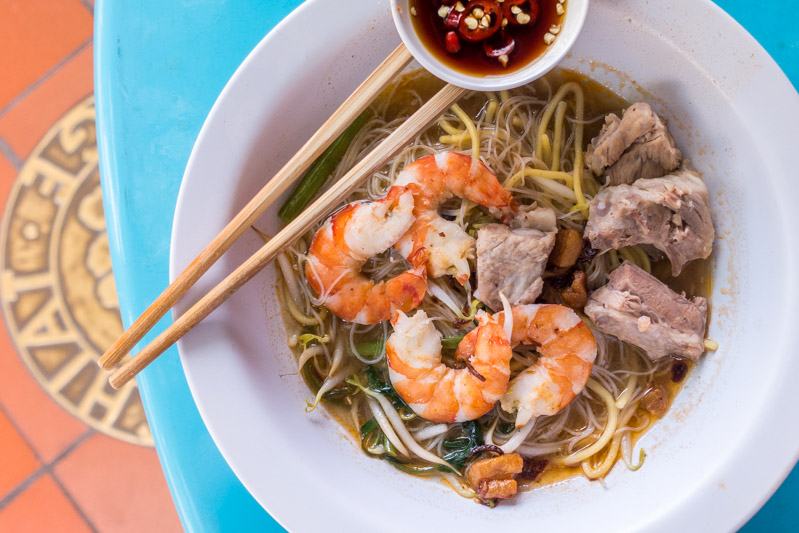 The Pork Rib Prawn Noodles (S$10) is another popular dish amongst customers, so we ordered it to see how it compared to the others. There was a sufficient amount of ingredients for the price, and I liked the use of two different noodle types. 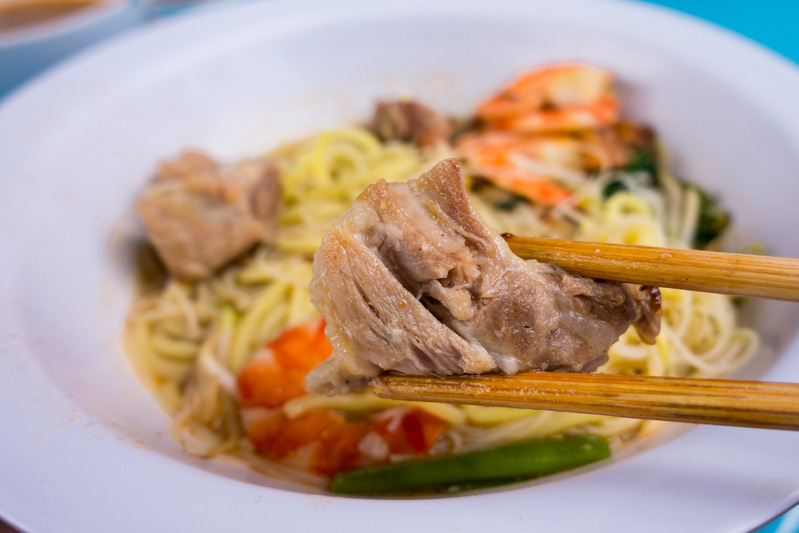 The pieces of meat were lean, yet equally supple and juicy. For pork rib lovers, I would recommend getting the larger variation of this dish, which is available at a top-up of just S$2, for more ribs and slices of prawn.

With unearthly waking hours and an excruciating time spent amid heat and flames, operating a hawker stall in Singapore is no easy feat. That’s why it’s so comforting to see more efforts placed by those in my generation to preserve the authenticity of our Singaporean hawker culture.

Would I continue to pay for quality dishes whipped up by these brave, young hawkerpreneurs? Definitely, or as the millennials would say, ‘yaaaasss’. Just hope there’ll be more soup next time!

Operating Hours: (Mon to Sun, except Tues) 7.30am - 2pm, Closed on Tuesdays
Facebook