Anyone who has visited Japan’s Tsukiji Fish Market will return expecting nothing less than delicate texture and freshness from their sashimi.

If you haven’t managed to find any Japanese joints back in Singapore that quite match the ridiculously high standards you now have, Don & Tori might well change your mind. 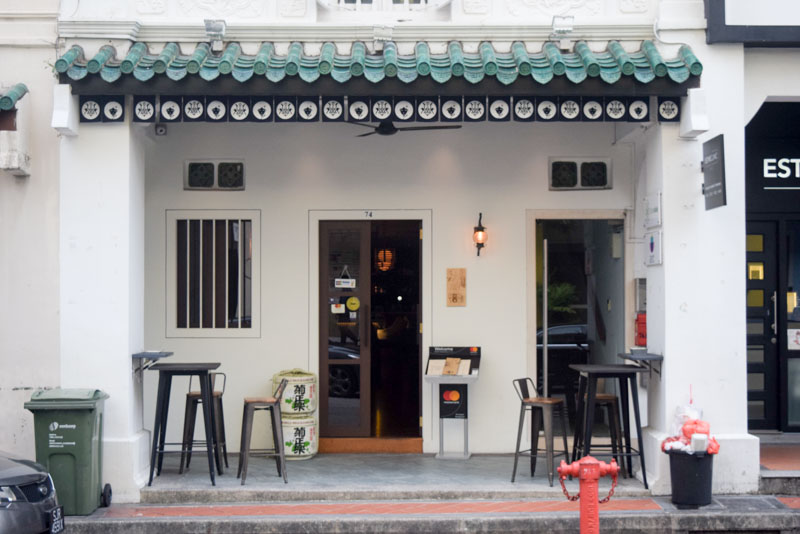 Don & Tori Japanese restaurant might be easy to miss because it’s nestled between rows of shophouses along Tras Street at Tanjong Pagar, but the quality of their food is nothing short of mighty.

The restaurant is helmed by Chef Jack Chang under the guidance of renowned local chefs Raymond Tan and Max Lai who have years of Japanese culinary experience under their belt. 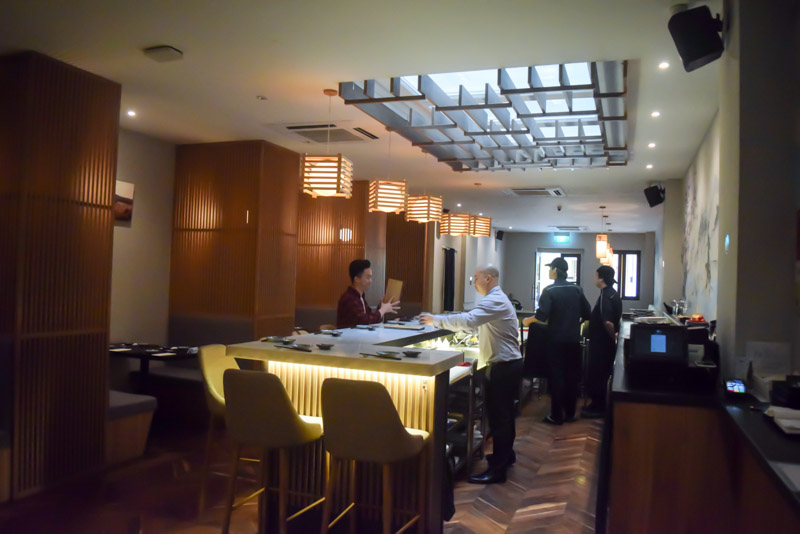 There are limited seats both inside and outside, so I’d recommend calling in for a booking in order not to be disappointed. Also, I should warn you that there’s pretty low lighting in the place so it can be hard getting shots of their glorious food. 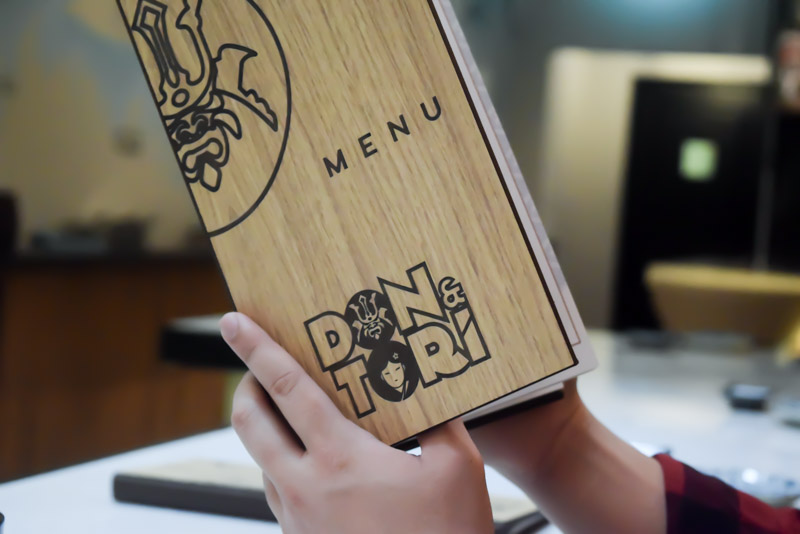 It was really nice to be loudly greeted by Don & Tori’s head chef Jack Chang who was all smiles and treated us just like his friends from the get-go. A few cheery exchanges later, he then promised us one dish from every segment of the menu and went ahead to get busy. 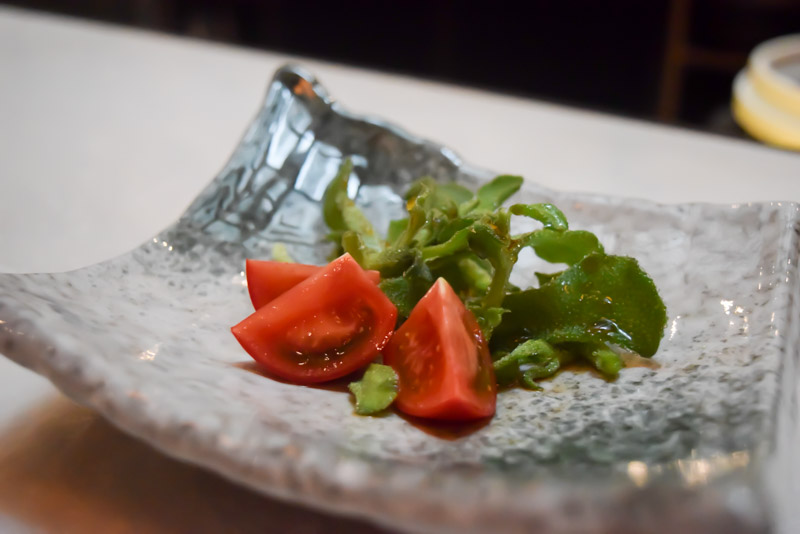 First up was their seasonal appetiser, the Ice Plant & Fruit Tomato ($12). Don’t be fooled by its humble appearance though — it may not look like much at first, but this vegetable-based dish was so worth the money.

Not only did the tomatoes ooze with juiciness, the Ice Plant really surprised me with it’s airy crunch. I kid you not, it was like biting into tiny clouds, with each mouthful disappearing as fast as they came. Do note that this appetiser changes with the seasons, so you might want to check what’s on the menu before ordering. 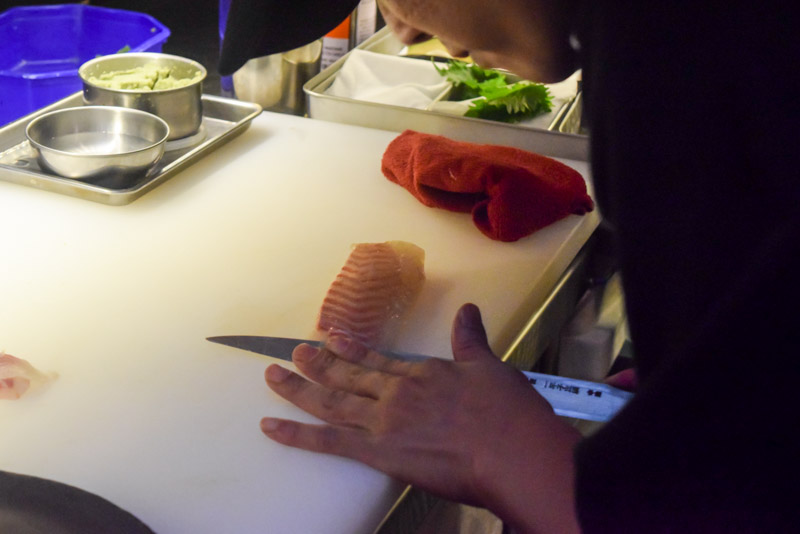 It was a real treat getting to watch the head chef’s clean knife work from the counter, and I couldn’t resist getting a closer look. Moments later he said, “aiyo, you came so quietly behind me, gave me a fright” — oops, I guess I should’ve gone easy on the stealth mode. 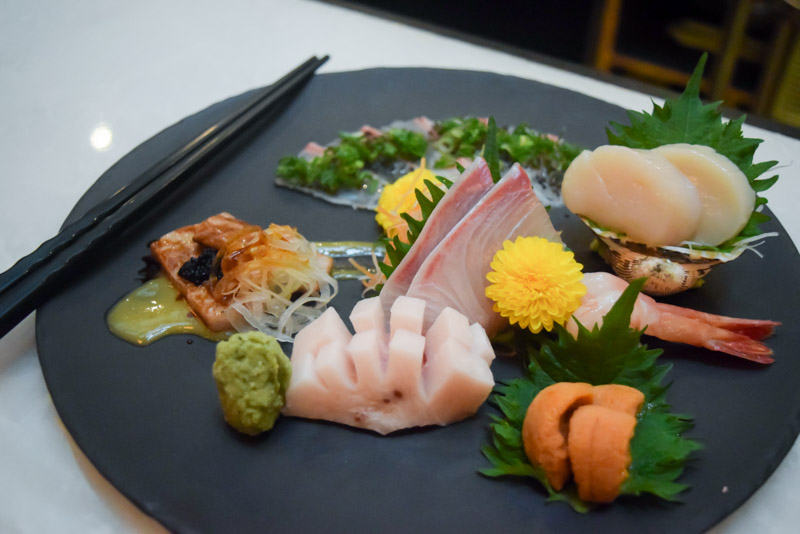 A few swift slices later, we were presented with this Premium Sushi Mori Sashimi Platter ($80) which included 12 pieces of premium-grade sashimi slices. From swordtail to sea bream, it was time to put their freshness to the test.

The head chef explained that the Toro, which is Tuna belly, sat atop a dash of vinegar mayonnaise, and the sea bream was marinated in truffle sauce. Hence, these two fish were meant to be consumed on their own, and not dipped in shoyu. Apart from fish, the platter came with scallops and uni as well. The creamy, soft texture of the uni was an absolute delight, and it melted in my mouth nearly the instant it hit my tongue.

Good uni to me is briny, creamy and rich, and it’s safe to say that this certainly checked all of it. 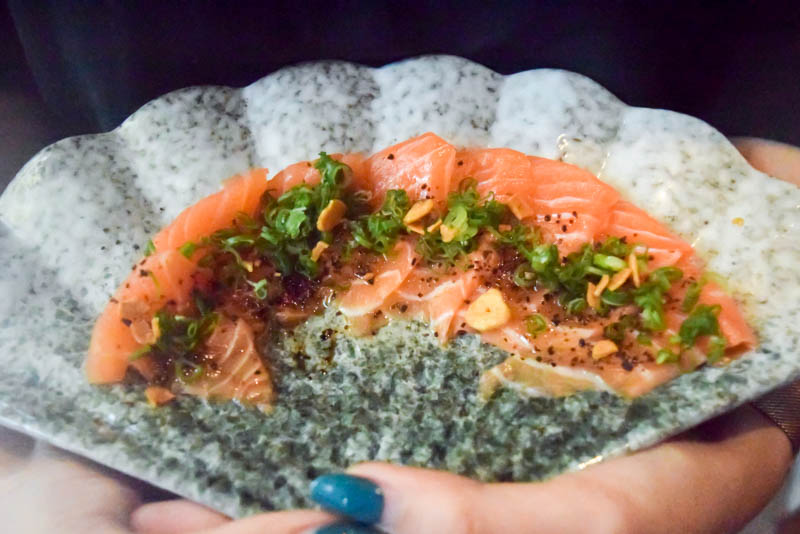 The natural thing to do after having a platter of sashimi is…more sashimi of course. The Truffle Salmon Carpaccio ($18) is topped with chives and crispy garlic chips, and drizzled with truffle oil.

If you’re a mad salmon sashimi lover like me, I would 10/10 recommend this for maximum satisfaction. The subtle truffle oil didn’t overpower the taste of the salmon, and actually enhanced this dish on a whole. Plus points for the garlic chips too! 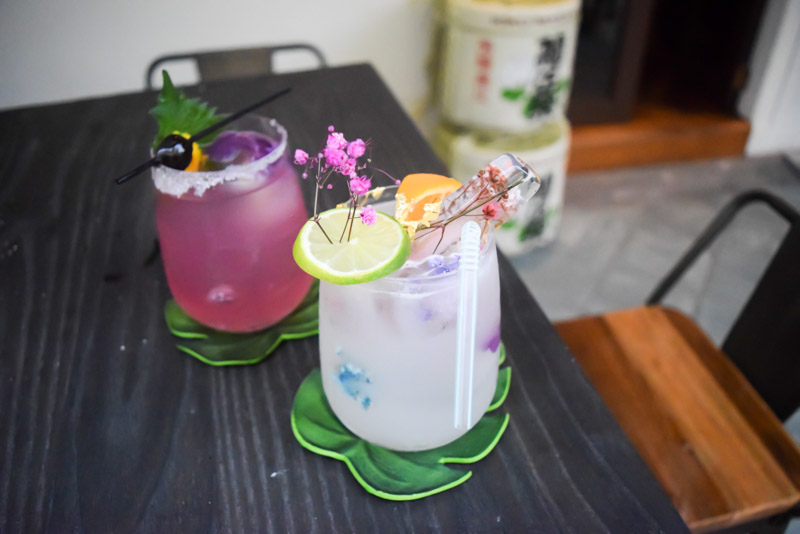 Midway into our meal, we were presented with their signature Sake’s Craft Cocktails. We were told that their cocktail menu underwent a couple of changes, and have since shifted towards sake-based cocktails like the ones pictured above. 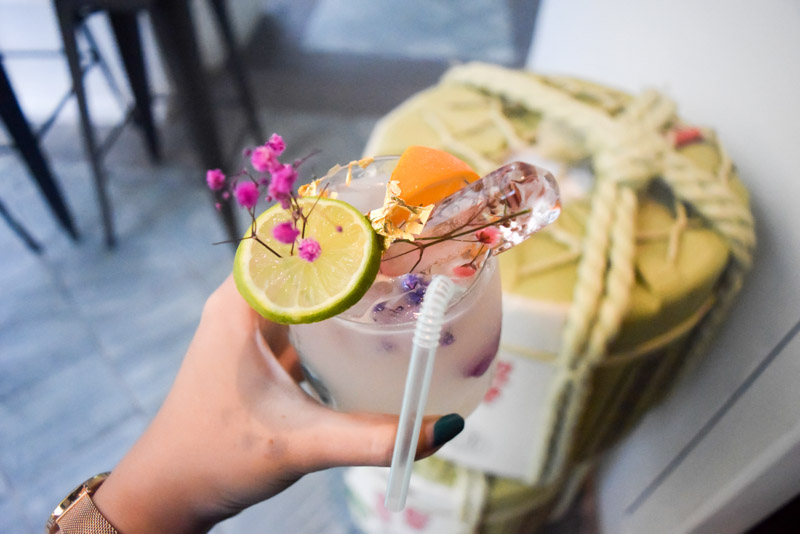 The Meiji Reform ($26) might just be the prettiest cocktail I’ve ever laid my eyes on! (cue heart eyes emoji). Topped with edible flowers and 24k gold flakes, can this drink get any more photogenic?

But of course, apart from its visual appeal, the blend of falernum, lychee, yuzu, sprite, shochu and sake was pretty interesting. It wasn’t exactly the most easy-to-drink beverage at first probably because of the uncommonly used falernum syrup (almond, ginger, lime, and sometimes vanilla, cloves, and allspice), but it kinda grows on you. 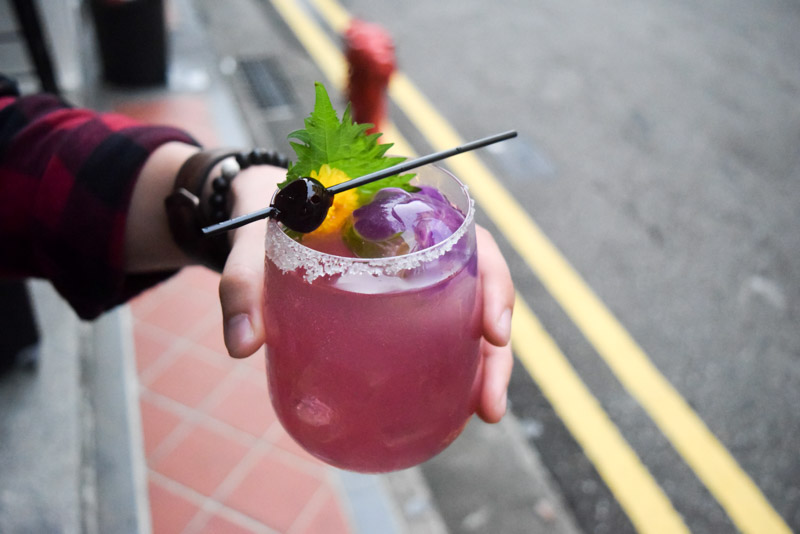 My colleague had the Edo’s Spirit ($26) which was a sweet mix of raspberry, elderflower, sake and sprite. The raspberry and elderflower gave the cocktail some added sugary and floral notes, and I enjoyed it more than the Meiji Reform.

Rest assured that all cocktails come with flower-infused ice cubes, so the ‘gram factor is always there no matter what you order. 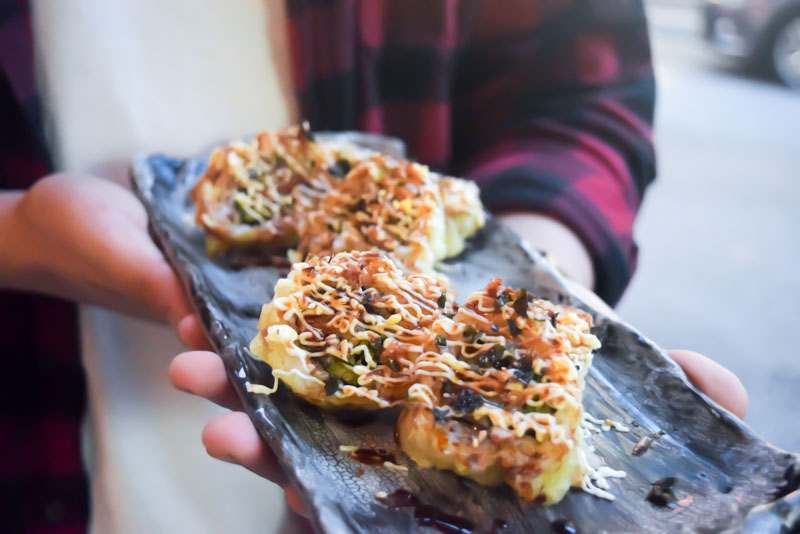 The Unagi & Hotate Tempura Maki ($27) really gave us a party in our mouths because let’s be honest, battered maki is always twice the sushi-goodness.

Although I love both unagi and hotate, combining them both in a sushi roll really downplayed their individual goodness. The unagi and hotate felt more like they were in competition with one another, rather than in harmony. Perhaps it would be better if they each had ample opportunities to shine? 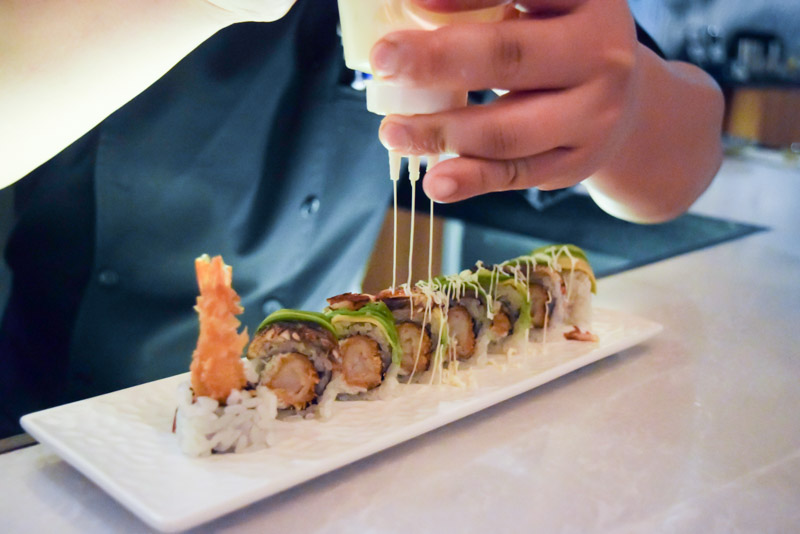 Other signature makis also include the Dragon Maki ($28), which is the classic combination of prawn tempura, crab, avocado and eel. The mark of a good Japanese eatery starts from the basics, and you won’t want to miss this. My colleague and I welcomed the Black Cod ($28) with open arms, and agreed that codfish is pretty much comfort food to us because both our mums made it a staple in our diets during our younger days.

This was equally heavenly, except elevated by the yummy mentaiko sauce which was torched over it. Albeit flaky, it wasn’t dry nor fishy at all. Even the asparagus bragged smoky, fragrant flavours.

Ironically, the mains were served just as were starting to get full, but obviously, we weren’t going to let that stop us from savouring what we came here for. The much anticipated Truffle Wagyu Foie Gras Don ($38) arrived, and with it came a waft of fragrant truffle oil. I know it doesn’t seem possible, but it tasted even better than it looked.

The chef was pretty generous with the wagyu beef and foie gras chunks, and sealed the deal with a sous vide egg sitting on top of it all. 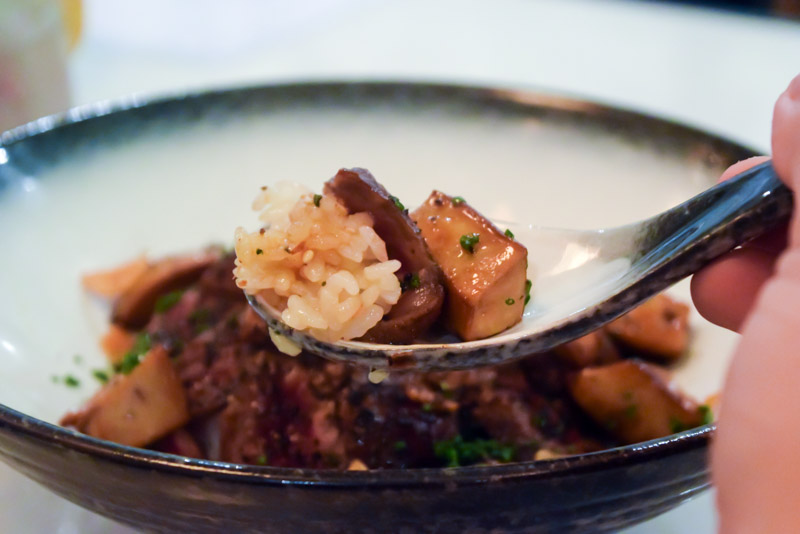 Each bite we took was power-packed with flavour from the luxurious meat, and trust me when I say there wasn’t a dull bite from this bowl.

I thought that I thoroughly enjoyed it but when I looked over to my colleague, I could’ve sworn he was high from ecstasy digging into this. “This is such a life-changing beef and foie gras bowl”, as he devoured it. 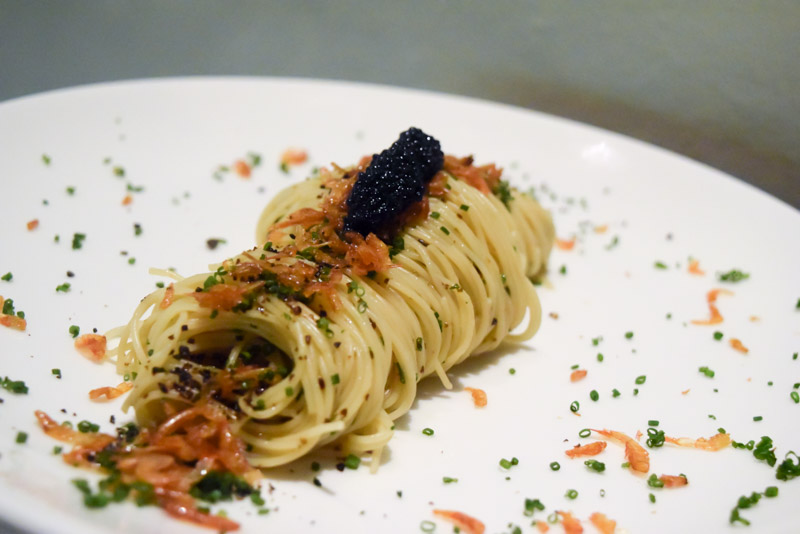 The last dish to be squeezed into our exploding tummies was the Sakura Ebi Angel Hair Pasta ($32). Angel hair pasta infused with white truffle oil and topped with caviar and Sakura baby prawns always seem like a good idea, but this seemed to be more like an appetiser rather than main. I mean, I was thankful that the portion was manageable for our already plateauing appetites, but I think I would be left unsatiated if I were to have it for my main. Size issues aside, I enjoyed the subtle truffle flavours and it definitely wasn’t too cloying.

After slurping up the last few strands, we thanked the head chef and were on our way. I’ve experienced many Japanese food joints because, like many others, I’m helplessly in love with Japanese cuisine. However, few have managed to impress and satisfy me like Don & Tori has. And even though their dishes lie on the pricier side, I wouldn’t hesitate to pay for fare that’s fresh and packed with flavours.

*Seth: On a separate anonymous visit, my sashimi wasn’t all that fresh and the egg on my wagyu beef bowl came broken already. Consistency might be an issue at Don & Tori – buyers beware.

Previous articleWatch The World Cup 2018 At Brotzeit Selected Outlets With Free-Flow Beer & Assorted Tapas Till 15 July
Next articleSushi Plates At Only S$0.88++ Each Till 17 June At This New Sushi Joint In Northpoint City