Ducatus Cafe: Pay For Your Meal Using Cryptocurrency At This Cafe Along Robinson Rd If you’ve been along Robinson Road lately, you might have spotted Ducatus Cafe which is now on the map for being Singapore’s first cafe that accepts cryptocurrency. In fact, the cafe has its own currency: Ducatus Coins. Ducatus Cafe’s owners, envisioned that bitcoin would have a large influence on society and aims for this cafe to demystify cryptocurrency.

Everything is cashless, so orders in the cafe are made through an app called “Blockchain”, where customers convert cash to bitcoin via the kiosk. A single bitcoin is valued in the thousands and items are priced at small percentages of it.

That aside, the cafe’s food isn’t exactly ordinary either. 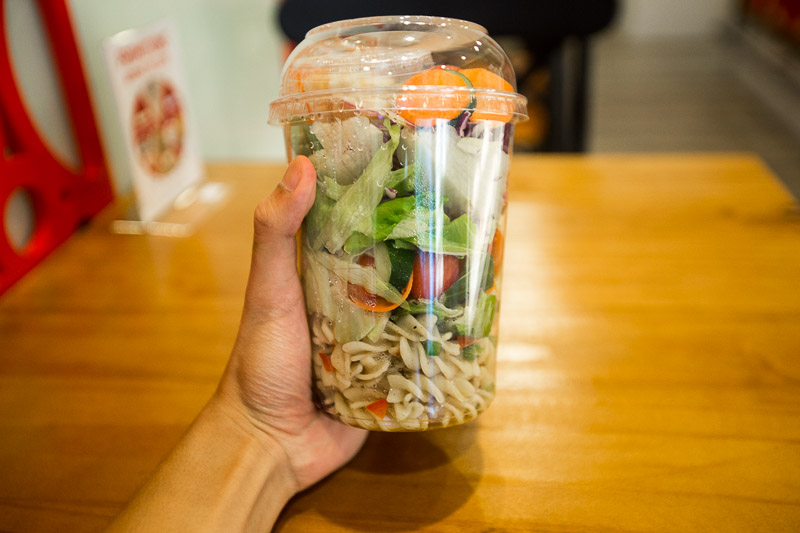 I just had to start with a jar of JUSTY GREENZ ($6.80). This picture doesn’t quite do justice to how large the serving really was, and it also came with tubs of Dressing and Protein.

I decided on Honey Mustard and Teriyaki Chicken along with a complimentary topping of Chipotle Salsa. 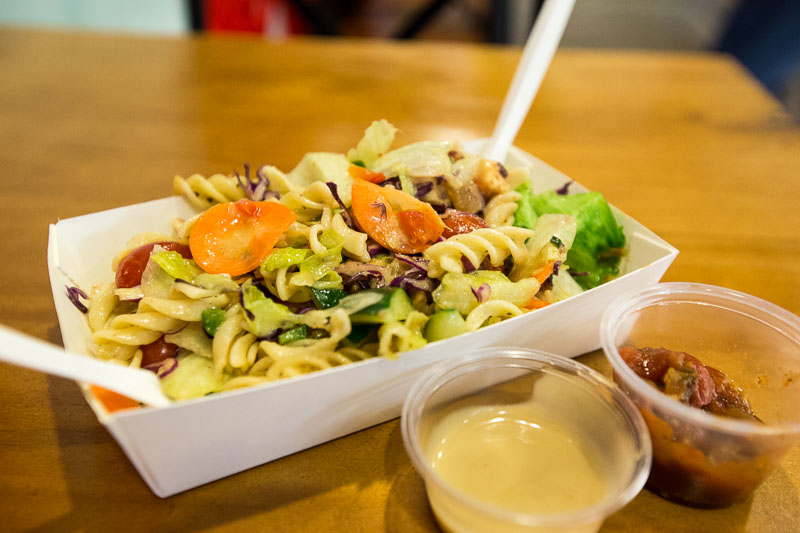 Now, I’m not one for salads but the greens in this dish just looked so appetising that I had to make an exception. The salad is made with a combination of lettuce, red cabbage, green peppers as well as other vegetables, and tossed with some pasta.

The vegetables had a refreshing crunch and tasted very fresh, with a hint of pepper; I was hooked after a couple of forkfuls. The Honey Mustard dressing was pleasantly mild and didn’t overwhelm the natural taste of the raw veggies.

The Teriyaki Chicken chunks were juicy and portioned just right, with a mellow sweetness when combined with the Chipotle Salsa. Next, I moved on to one of the meatier selections. The Chino Bacon & Eggz ($5.50) is actually a flatbread that’s filled with –wait for it– pieces of Bak Kwa. Philip told me how he stumbled upon Bak Kwa in the States during his time studying abroad, and apparently there it’s known as Chino Bacon.

If you haven’t had Bak Kwa in any way other than on its own, it’s high time to try something new this year. The Chino Bacon & Eggz was similar to a BLT (Bacon, Lettuce & Tomato Sandwich), just the Asian version! The Bak Kwa was sweet and wasn’t too dry and went really well with the lettuce and those “little balls” (which is what Phillip described them as). I can’t disclose what exactly the “little balls” are as I have to respect Philip’s decision to keep it secret, but the added ingredient gave each bite a unique crunchy and crisp texture.

This flatbread wrap was great as an afternoon snack and would be ideal if you’re looking for a quick lunch. 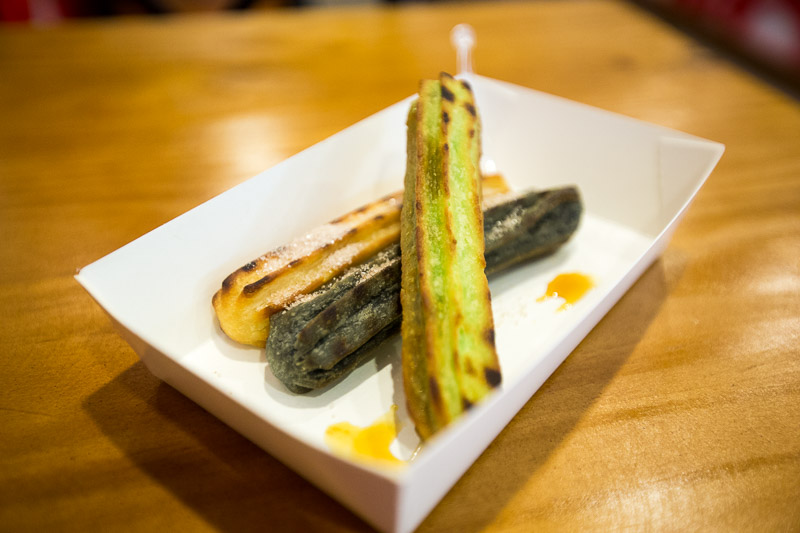 With most of my five-a-day out of the way, I ordered some Churros ($5.60). You can select from three choices: Onde Onde, Charcoal with Sea Salt and Original. I tried them all.

I liked how the sticks of Churros were toasted, giving them a nice crisp exterior, and a contrasting moist and chewy interior. They were also sprinkled with Cinnamon Sugar and a little bit of gooey Gula Melaka, which was a nice local touch.

I really enjoyed the Onde Onde flavour in particular, which had a mellow pandan taste that I just couldn’t get enough of. The other two were nothing to really write home about, and I, unfortunately, couldn’t taste much of a difference between them. I ended my visit with a Popcorn Latte crowned with Mini Chocolate Donut ($7.50). The appearance of the coffee may seem a little lacklustre at first, but if the name hasn’t already told you otherwise, this is not your average cup of joe.

The donut, while different, was slightly mushy in texture from the steam that was rising from the cup – not my favourite part of the drink. Thankfully, the coffee absolutely did not disappoint.

You can choose a shot of either Vanilla, Popcorn or Caramel syrup for $0.60; and I (obviously) went with Popcorn. It was a great decision as aside from adding sweetness to the coffee, I could also taste a hint of a nutty flavour with each sip. This made the latte really easy to drink without any bitter or acidic aftertaste.

If you’re working around the area, swing by Ducatus Cafe for a pretty unique cafe experience. Besides the whole novelty of paying with Ducatus Coins, the food is pretty affordable and very dabao-friendly.

I’ll be back for that Bak Kwa flatbread!