Located along Joo Chiat Road, Dunman Food Centre is one of the smallest hawker centres in Singapore, with less than 30 stalls spanning two floors.

However, it’s home to a ton of hidden gems, such as Singapore’s only tau kwa pau stall, a famous rojak stall, and a wanton mee stall that has ties to Eng’s Wantan Mee (gasp!), and more. I’ve been coming to Dunman Food Centre since I was a kid and I recall fond memories of piping hot bowls of frog leg porridge, wok hei-filled plates of carrot cake, and more.

To my surprise, when I dropped by in October 2019, I realised that a good majority of stalls have left, including the frog porridge stall, curry puff stall, and more.

Despite, that, I still found plenty of stalls that were worth visiting. Here are 10 must-try stalls in Dunman Food Centre that are worth braving the long queues for. It’s been around since 1959—the founder first started selling duck rice along Katong Road before creating little beancurd buns stuffed with filling to attract Peranakan gamblers, as it looked like purses containing gold coins. Ironically, the filling in the Tau Kwa Pau (S$1.50 per piece/S$5 per plate) wasn’t even stuffed into the tau kwa bun but surrounding it, so the only way I could eat it was by cutting the tau kwa into tiny pieces and scooping it together with the coarsely chopped filling.

It was unlike anything I ever had. Light, springy, and indulgent, the tau kwa pau had all the familiar flavours of a plate of duck rice—just without the rice. I found myself polishing off the entire plate within minutes. It was first known as Eng’s Wantan Noodle (yes, that Eng’s wanton mee stall—you can read the entire saga here) before the two partners owning the stall split ways. One went to open Eng’s Char Siew Wan Ton Mee on a different floor within Dunman Food Centre, while the other kept Dunman Road Char Siew Wan Ton Mee as it is.

Its wanton mee goes for S$3/S$3.50 and it’s well-known for its super potent and bitingly spicy chilli (not for the faint-hearted) and its homemade egg noodles, which is thick and supple. Not only did Long Yuan 龍源咖喱汁烧腊‘s gleaming signboard catch my attention, but the fact that it sells roasted meat with a special curry flavour also intrigued me instantly, and I knew I had to try it. I ordered the Char Siew & Roasted Pork Rice (S$4.50), and found out that the “special curry flavour” was its unique curry sauce, which drenched my entire plate.

The char siew was one of the best I’ve ever tasted. It was soft, juicy, and had a smoky tang to it, and went really well with the piquant and spicy curry sauce.

The stall also sells duck and chicken meat, and you can opt for noodles instead of rice as well. Mr Lim Khai Ngee has been making rojak for the past 45 years, and to him, it’s more than just chopping ingredients, mixing them with peanut powder, and serving it up.

At Lau Hong Ser Rojak 老鸿生囉喏, he actually roasts the dough fritters over a charcoal stove fresh upon order, makes his own chilli prawn paste from scratch every morning, and crushes and toasts his own peanuts too! Talk about dedication. For just S$3 a plate, Mr Lim’s rojak was incredibly worth it. It was aromatic and crispy, and had a faint smoky aftertaste, which made each bite all the more fragrant. This stall bears no name, but it’s often known as Stall 28 (after its unit number) or No Name Hokkien Mee. You’ll recognise it instantly because it’s located right in the middle of the second floor of the hawker centre. 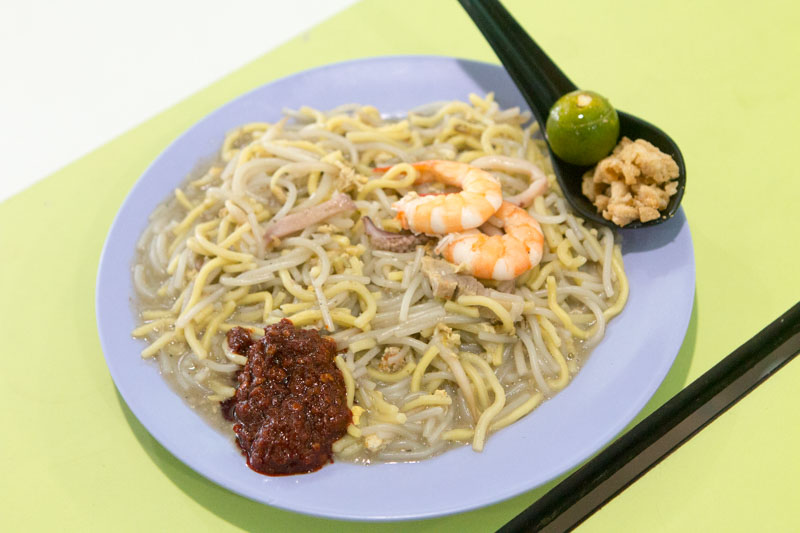 For just S$4, Stall 28’s Fried Hokkien Prawn Noodle came in an incredibly generous portion—the noodles were almost spilling out of the plate. I also loved it that they placed the lard cubes separately, so those who aren’t a fan of lard can avoid it entirely. Though 915 Western Food is the only Western stall in Dunman Food Centre, it still serves up quality grub, such as Black Pepper Lamb Chop (S$8), Chicken Cutlet (S$6), and more.

Despite its simple appearance, it’s garnered a solid fan following online for its generous portions, tender meat, and good service. 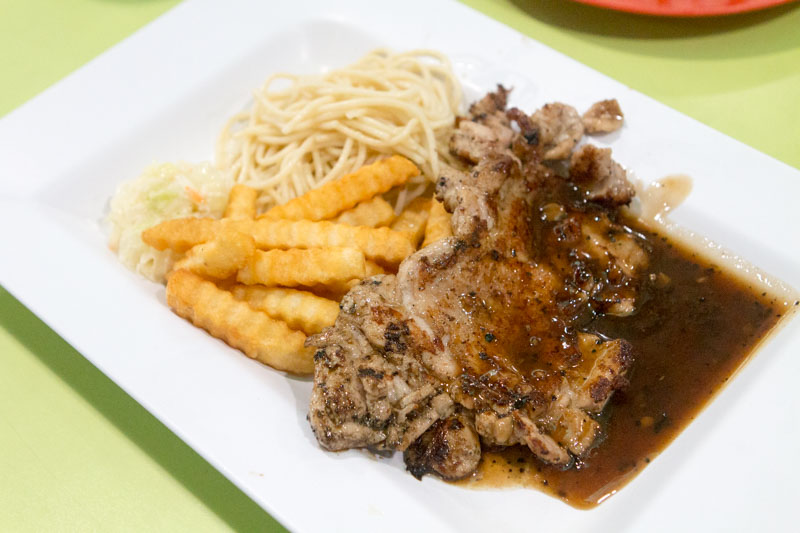 The chicken chop was super juicy and succulent. Plus, the meat was well-seasoned and didn’t have to rely on the sauce for taste, so every bite was full of smoky and savoury flavours. 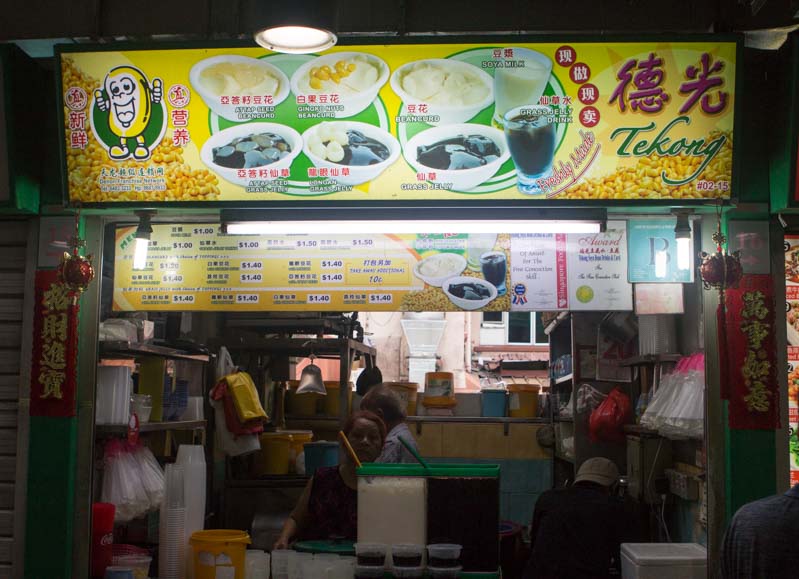 Located on the second floor of Dunman Food Centre, Tekong Soya Bean Drinks & Curd makes its own soya milk and sells it for just S$1 per glass. I ordered the Soya Milk (Ice) (S$1) and was pretty impressed with the serving size—it’s the kind of cups that stalls use to serve sugarcane juice!

The soya milk was smooth, fragrant, and light, and more importantly, it wasn’t overly sweet. After I finished my cup of soya milk, I resisted the urge to buy another—not because it left me feeling thirsty, but because it was sooo good. 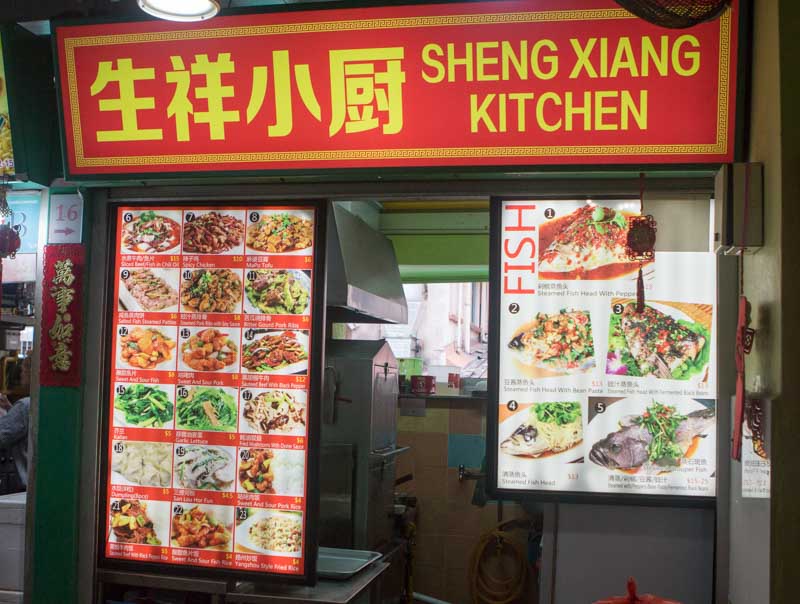 For those looking for dishes with a spicy kick, try Sheng Xiang Kitchen (生祥小厨).

It’s one of the newer stalls around, with little to no reviews of it on the web, but its menu looks promising and sports a range of sichuan Chinese dishes that are authentic and affordable. It was first started in the 1960s by a Chinese guy named Ao Yang, who resembled a Caucasian. His fans started calling his stall “ang moh” wanton mee, and that’s how the stall name came about. 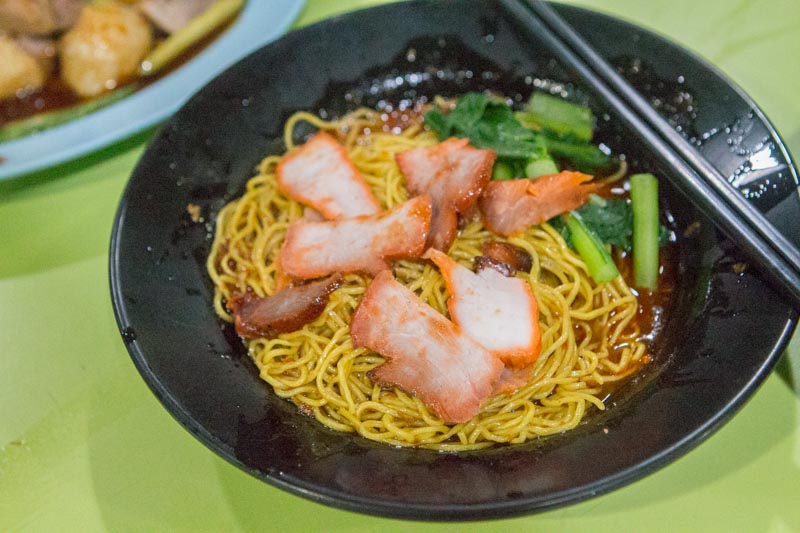 A plate of Wanton Mee costs S$3/S$3.50, and comes with a bed of springy egg noodles, a glossy lard-based sauce, a dash of chilli oil, slices of char siew, vegetables, and a bowl of wanton soup.

Do note that the stall adopts a unique queuing system: take a queue number from the stall and go back to your seat. Once your number is called, you can place your order, which will be cooked on the spot. OK 美食 has been around since 1999 and serves quality and affordable Chinese zi char dishes. It’s popular for its steamed fish dishes, such as fish head, tekkia fish, sea bass, assam fish head, grouper, and more.

Its signature Steamed/Bean Sauce Steamed Fish Head (S$15) is a crowd favourite because its song he fish head (Asian bighead carp) is always super fresh. The meat is soft and tender, and the bean sauce marinade is piquant and zesty, thanks to the addition of chilli padi, ground ginger, and preserved black bean.

Though Dunman Food Centre is small and has only 30 stalls, there’s no doubt that all its stalls are well-loved, having garnered a loyal stream of fans over the years.

From tender char siew rice dishes doused with a rich curry sauce to smoky rojak with dough fritters that have been grilled over a charcoal stove, Dunman Food Centre is definitely worth a visit.