If you stay in the East or if you love wonton noodles, you may know about the rivalry between the two ENG’s wonton noodle stores at Tanjong Katong Road.

When I was younger, my mum and I frequented the original ENG’s at 287 Tanjong Katong Road. Recently, however, I realised there was drama unfolding, so I had to get to the bottom of it.

Prior to their location along Tanjong Katong Road, the late Mr Ng Ba Eng opened ENG’s Wantan Noodle in Dunman Food Centre. They grew popular because of their springy wonton noodles, luscious wonton dumplings, and their exceptionally spicy chilli sauce. 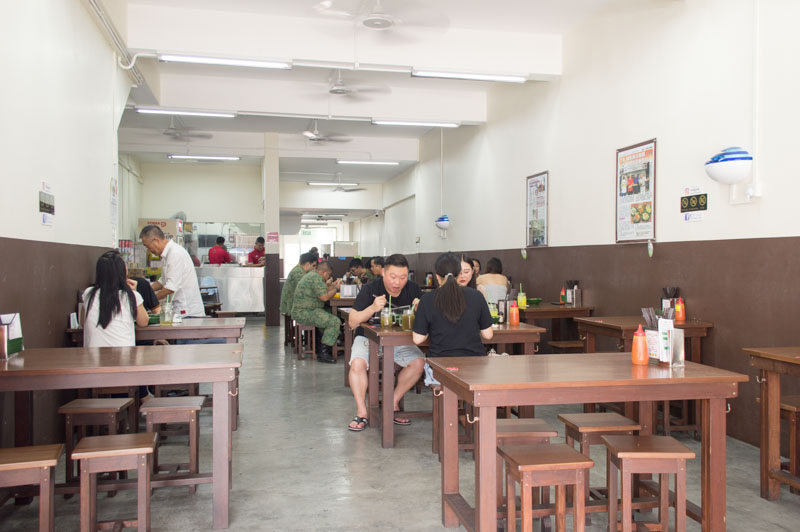 In 2012, Mr Ng relocated his shop from Dunman Food Centre to 287 Tanjong Katong Road. Unfortunately, in 2013, Mr Ng passed away and the ownership of the store was passed to his son, Desmond Ng.

However, 2018 is the year when things got messy when a new investor would come in. This resulted in two independent wonton noodle stalls: ENG’s Wantan Noodle at 287 Tanjong Katong Road (the original address), and ENG’s Char Siew Wantan Mee at 248 Tanjong Katong Road.

As the saying goes, there are two sides to every story. So, I paid a visit to Tanjong Katong Road to uncover the truth behind the two stalls.

I first went to ENG’s Wantan Noodles at 287 Tanjong Katong which has been bought over by the soup chain company, Lao Huo Tang (老火汤) and co-managed with one of the original business partners.

After speaking to the current owners at 287, they alleged that since the late senior Mr Ng passed away, there was an increase in the number of complaints. Diners were not satisfied with the service, and there were even irregularities in their accounts. 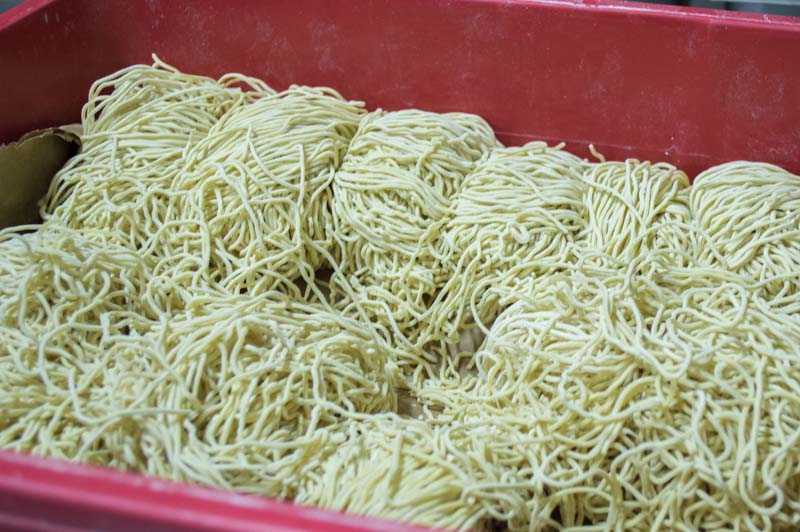 We were told by the current team that the old ENG’s management team (consisting of Mr Ng’s children) was unstable/uncertain back then, and so the investors decided to distance themselves from the Ng siblings. According to their statement, Mr Ng’s children had intentions to retire and informed their old customers about it too, which is why the shop’s lease was renewed and bought over by Lao Huo Tang Company instead.

Despite being bought over by a different company, loyal customers have continued coming to this stall.

After they split, ENG’s Wantan Noodles retained more their half of the staff and chefs that were previously Mr Ng’s protegees. 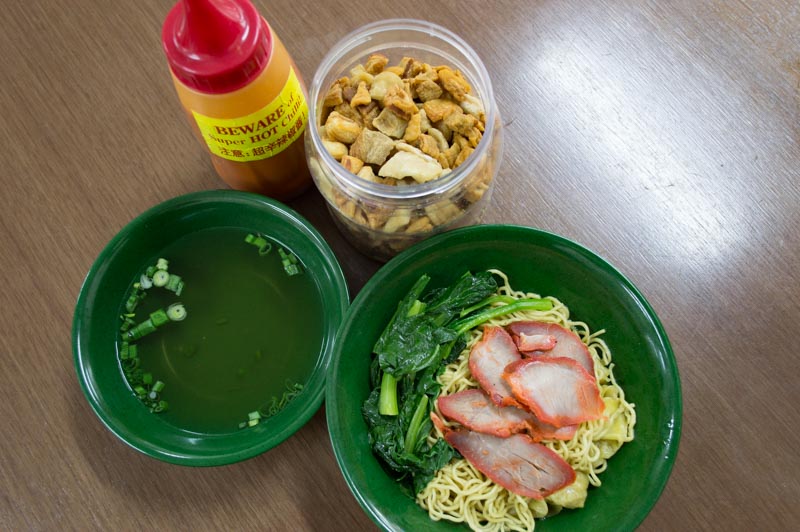 Since I was comparing the stories between the two stalls, I also wanted to compare the differences between their noodles.

Wonton noodles have been around since the 1950s. Through the years, there has been an evolution in wonton noodles as they started to become thin and chewy. But ENG’s Wantan Noodles always stuck to their traditional springy noodles. 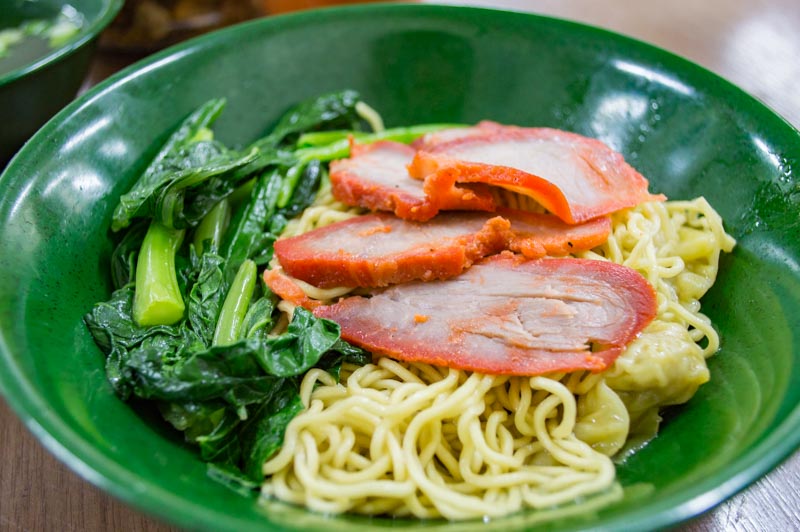 Since their time at Dunman Food Centre until now, ENG’s Wantan Noodles has stuck to the same menu focusing on their noodles, wonton and poached vegetables.

The current ENG’s Wantan Noodles pride themselves for keeping to the late Mr Ng’s recipe, so I tried their original Dry Wantan Mee (S$4.50/small, S$5.50/big). 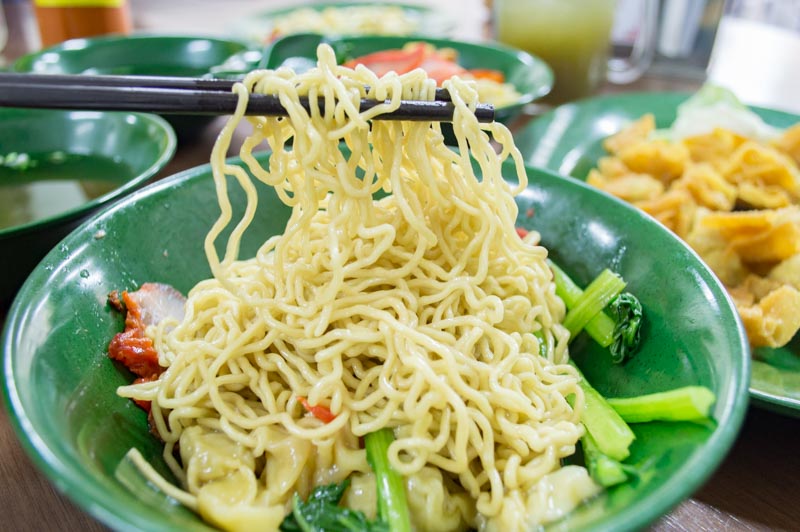 All the noodles at ENG’s are homemade with 100% egg and flour. This is then cooked with their secret in-house sauce, adding a salty flavour with a hint of pork to the dish. The side of char siew helped to sweeten the noodles a little too. 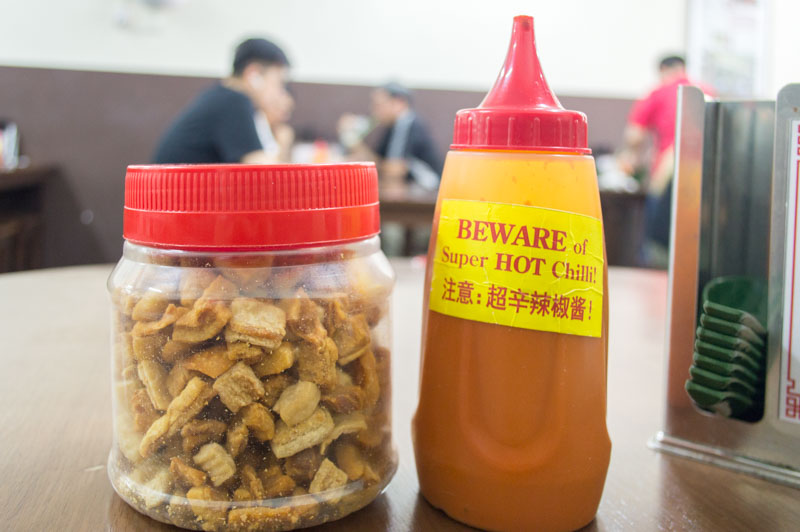 To make the wonton noodles better, add in their freshly deep-fried lard and their special chilli sauce. The lard bits are kept in a container, so all diners can indulge in as much of this sinful treat as they want.

ENG’s Wantan Noodles have always been popular for their fiery chilli sauce. Even diners who think they have a good spice tolerance should be careful with it.

Thinking I could handle the spice, I put a spoonful of their homemade fiery sauce into my noodles. I instantly regretted it, even though the chilli did not burn my mouth right away. However, the heat slowly built up until it felt like my mouth was on fire.

They also have Fried and Boiled Wantan (S$3/small, S$5/large), available a la carte. These handmade dumplings are bite-sized, so you can just pop them in your mouth.

Wrapped with thin dumpling skin, each dumpling contained a small ball of marinated minced pork. The hint of sesame oil in the minced meat made it very fragrant too.

I decided to head over to ENG’s Char Siew Wantan Mee next. Opened by both of Mr Ng’s children (including Desmond Ng), this stall is just across the street at 248 Tanjong Katong Road and opened up in 2018.

I sat down with the sibling duo to find out more about their role in this drama.

However unlike what we heard from ENG’s Wantan Noodle, Mr Ng’s children mentioned that they did not intend to leave the business at all. However, one day they discovered that their ex-business partner had been negotiating with the Lao Huo Tang company to buy over their stall.

Since they got pushed out of their father’s company, they’ve set up a new stall opposite the original. However, most of their head chefs and staff refused to follow them. 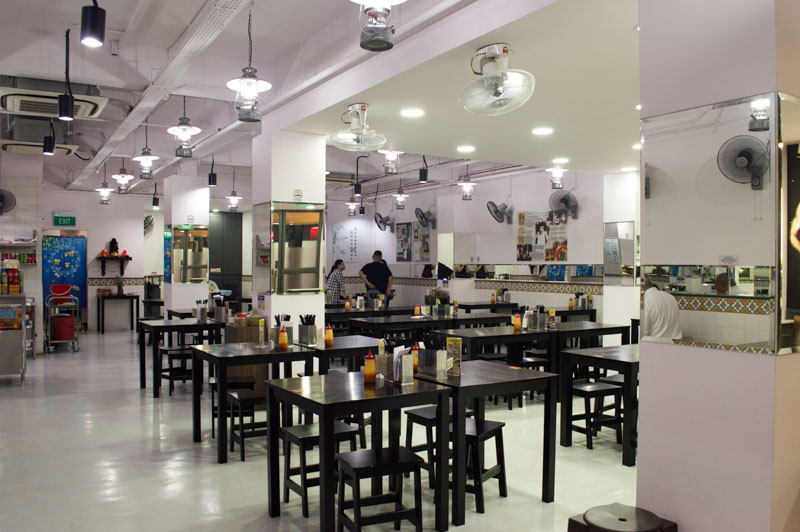 This new ENG’s Char Siew Wantan Noodles is an upgrade from their original stall at 287. They have more seating space for their customers, and much-needed air-conditioning, considering Singapore’s hot and humid weather.

After the supposed betrayal, both Ng siblings didn’t dare to take in any other protegees as they didn’t want the noodle recipe to be leaked. This left the cooking to them and two other chefs. 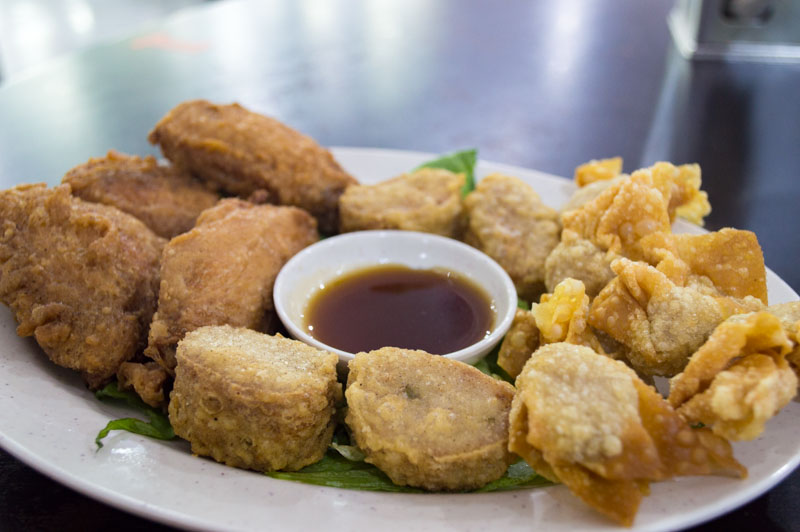 One of their chefs was previously the head chef of Swatow Restaurant. At ENG’s, he specifically cooks the 5 Spiced Rolls (S$4) and Prawn Paste Chicken (S$5). Even though most of their previous workers left, 95% of their diners have followed them from the previous stall.

The Prawn Paste Chicken was crispy on the outside, yet it was still juicy and tender the inside. Infused with prawn paste, each bite of the meat was very aromatic.

Their homemade ngoh hiang was made with crispy beancurd skin, with a sweet crunch from the chestnuts within. 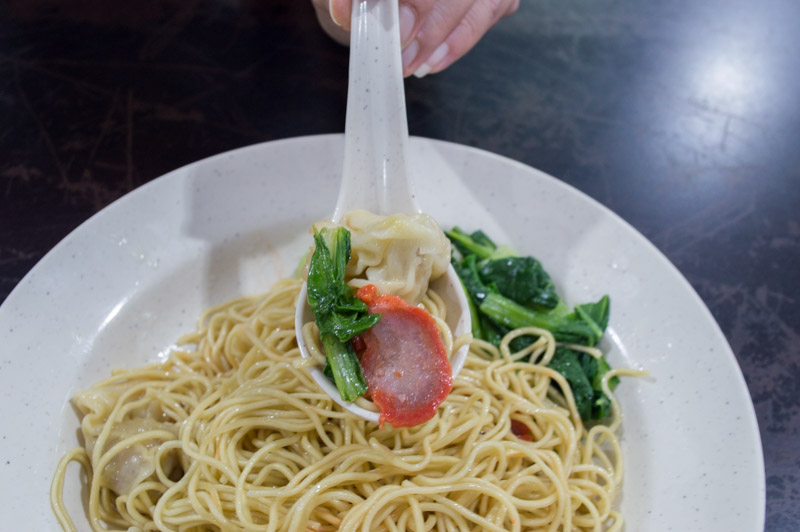 Compared to ENG’s Wantan Noodles, ENG’s Char Siew Wantan Mee is slightly more fragrant. They toned down the spiciness of their chilli sauce, as some diners underestimate the spice level. Putting too much chilli actually spoils the bowl of noodles.

If you are an early riser, Desmond also serves their wonton noodles in the morning at Simpang Bedok. In the afternoon, the stall turns into a clay pot rice store.

I preferred ENG’s Char Siew Wantan Mee more as their noodles were slightly more fragrant. I really enjoyed their prawn paste chicken too.

After hearing about both sides of the story, whose side are you on? Munch On Lu Rou Fries & Taiwanese Food At The Salted...