The concept of ‘fried porridge’ baffled me. Sure—fried egg, fried noodles, and fried rice, but… porridge?

Dynasty Fried Porridge proved me wrong. This quaint stall is located along Foch Road (which is near Lavender) and is an authentic Ipoh zi char restaurant that’s been around since 2015. 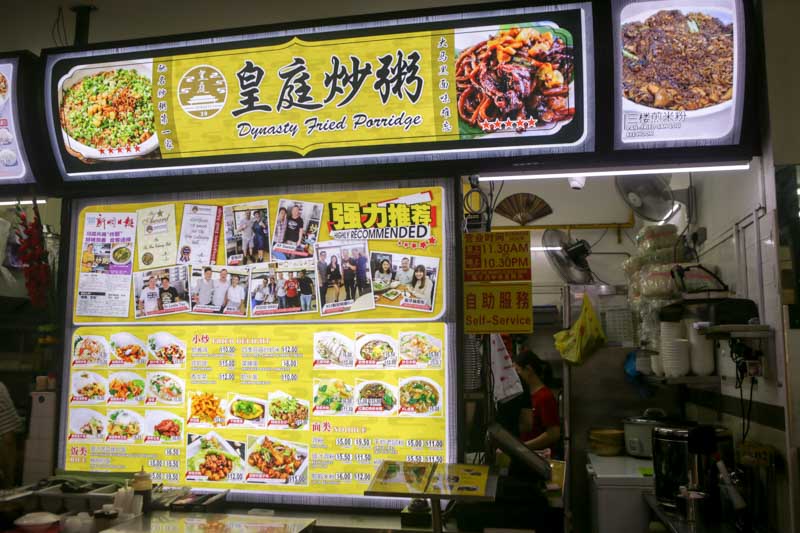 Dynasty Fried Porridge was opened by a Malaysian couple in Dec 2015. They left their hometown, Ipoh, to set up their first stall at MacPherson. Then, they shifted to Lavender, and then to Bugis, before finally arriving at Foch Road.

Fun fact: the concept of fried porridge came from Malaysia and originated because families were trying to find a way to make the best out of leftover porridge.

They decided to “fry” porridge in a pan, just like they would with rice or noodles, and see how it turned out. 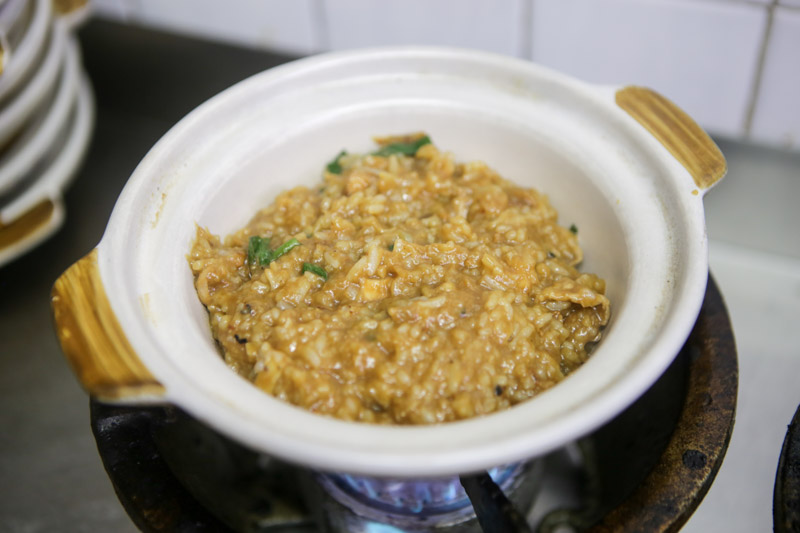 Tadaaaah, and fried porridge was born!

After it’s fried in a pan, Dynasty Fried Porridge’s Chef John transfers it to a claypot and lets it cook for a while longer to achieve that smoky wok hei effect. It’s the only zi char stall there, but the kopitiam has other stalls like the famous Kok Kee Wanton Mee as well. The interior of Bistro 8 is bright and spacious, with plenty of marble tables and wooden chairs lining the space. I loved that the kopitiam had large tables, enough for eight or 10 pax, which is the typical group size for dining at zi char places. I ordered the Small, which was enough for one to two pax. 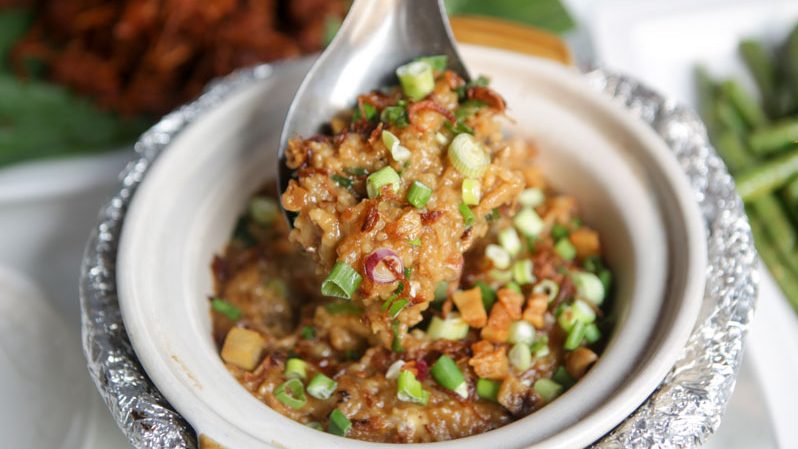 Texture-wise, I actually expected it to have crispy bits, just like claypot rice. In reality, it was starchy and thick, like glutinous rice and soft-boiled yam, and the actual rice bits were soft and pillowy. Just imagine having 85% of the moisture sucked out of your porridge, and there you go—fried porridge.

I really loved how comforting the fried porridge was. It had just the right amount of saltiness from the soy sauce (which is what turned the porridge brown) and its time on the wok and claypot gave it a nice charred wok hei aroma.

It also had a good amount of spring onions, fried shallots and lard bits that helped cut through the thick starchiness from the porridge. The second dish I was really keen to try was the KL Hokkien Mee (S$5/small).

My mother was born in Malaysia and I go back every year for Chinese New Year, so I know how an authentic plate of Kuala Lumpur’s hokkien mee really tastes like. All it took was one look at Dynasty Fried Porridge’s KL Hokkien Mee and I knew that it was authentic to a tee because it used dark soy sauce. I really loved Dynasty Fried Porridge’s hokkien mee. It was smoky and salty, with a hint of tangy sweetness, which made the noodles super slurp-worthy.

There was also a fair bit of seafood, like prawns and fishcake, and what topped it all for me was the thick black gravy, which coated the noodles beautifully. 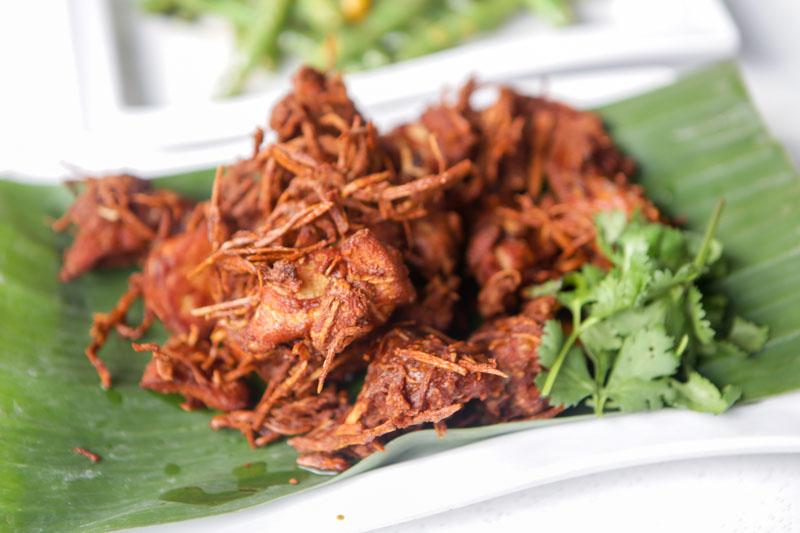 If you’re dining with your family and friends and looking for a meat dish to share, be sure to get Dynasty Fried Porridge’s Signature Fried Garden Chicken (S$15). 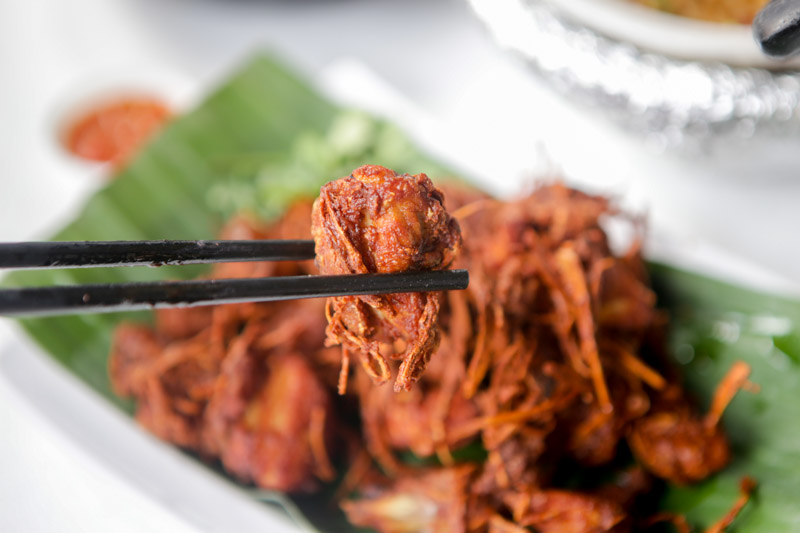 It’s a combination of prawn paste chicken and fried ginger (which are those little strips), so when I took my first bite, I initially thought it was overly salty. However, when I continued chewing on the tender chicken bits, I realised that it was more fragrant than salty.

The fried ginger slices were incredibly aromatic and zesty and when paired together with the savoury chicken bits, it created an addictive umami bomb that made it physically impossible for me to stop reaching out for the next piece. A huge plus point about Dynasty Fried Porridge’s French beans was that it was really plump and juicy, as if it had been soaked in water prior to frying. Plus, the salted egg sauce only covered the exterior of the French beans, so there was a good balance of savoury and sweet notes with each bite.

What Dynasty Fried Porridge serves is really unique and authentic. I’ve never heard of fried porridge prior to this, but one visit to this cozy zi char place made me an instant fan of this comforting dish.

Plus, it serves other yummy zi char dishes that would please both Singaporeans and Malaysians alike, which is a huge plus.