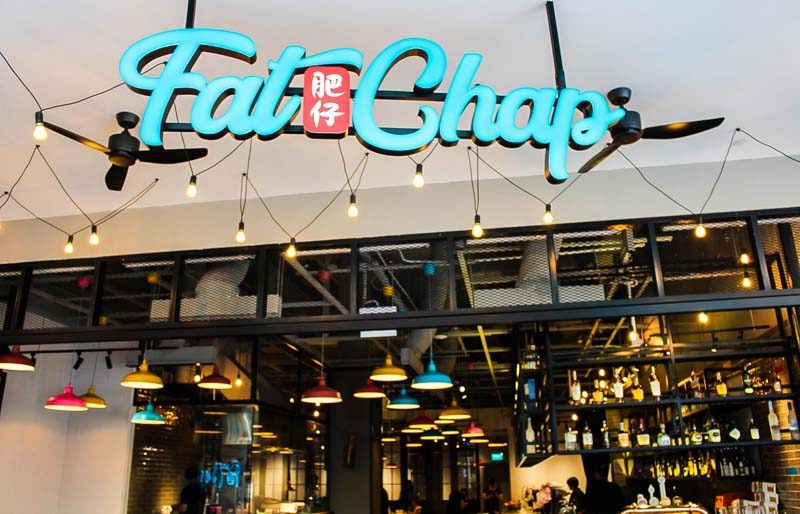 If you’re constantly on the hunt for a new watering hole, Fat Chap is the answer for a relaxing weekend afternoon with friends or family.

Located at Suntec City Tower 4, this new dining concept offers full-bodied Asian flavours, and is the latest brainchild of 1855 F&B – which means that you’ll also find a wide selection of unique cocktails served there. The inviting interior is as an eclectic blend of quirkiness and timelessness. The restaurant sticks to classic wooden furnishings, but lures the eye in with a neon sign and colourful ceiling lights. 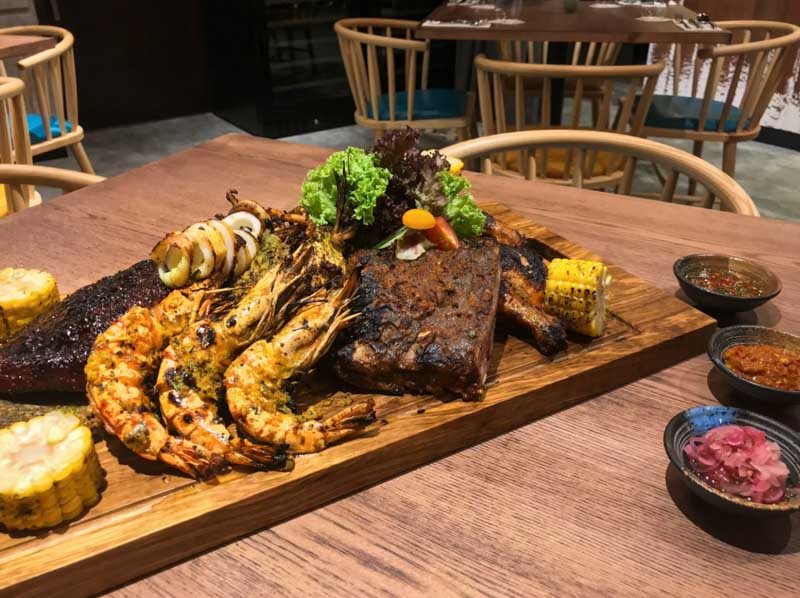 We’re not short of Asian restaurants in Singapore, but Fat Chap stands out with delicious-looking weekend brunch sharing platters, perfect for those looking to make the most of Saturday and Sunday afternoons (platters served from 11am – 4pm). I dived straight into the Land & Sea Party (S$168), which comprises half a rack of Balinese pork ribs, half a kampung chicken, lamb ribs, ribeye, marinated fish, squid and prawns.

Fresh vegetables and grilled corn on the cob complete this platter meant for four to five people. While the seafood was pretty decent, the ‘Land’ part of the platter stood out more for me. The highlight of my meal was the pork ribs; the meat fell off the bone, yet retained charred bits which gave it texture and a layer of smokiness.

I could not figure out why the flavours tasted oddly familiar, until Head Chef Mr Selamat Susanto informed me that the pork had been marinated in kicap manis, as inspired by his childhood in Indonesia. 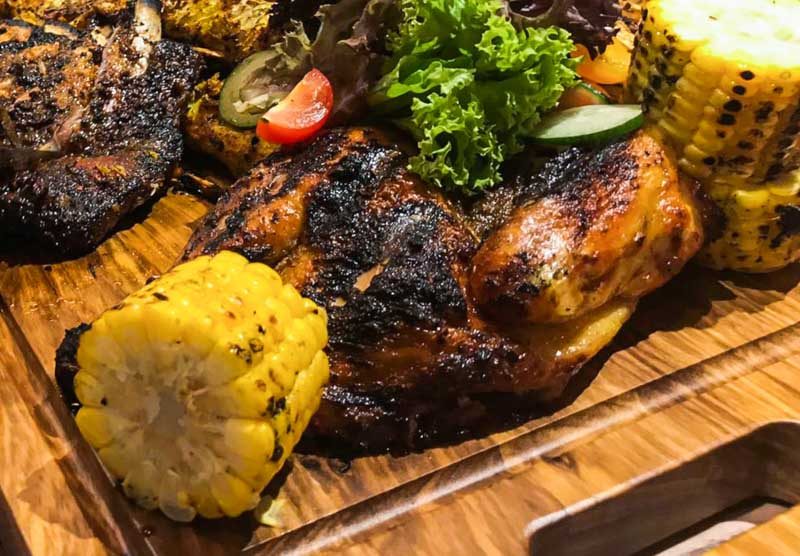 Similarly, the kampung chicken was Mr Selamat’s version of ayam bakar. I usually stay away from grilled chicken as the meat tends to be overcooked, but this overhauled that perception.

The chicken skin remained intact and had mouth-watering grill marks, with the fats providing extra juiciness and keeping the meat tender. This is what grilled chicken should always taste like and I’d recommend digging into it while it’s hot!

I also have to give a shoutout to the corn on the cob as the best I have ever tasted. Generously buttered and brushed with coconut cream, its savouriness paired well with the corn’s natural sweetness. 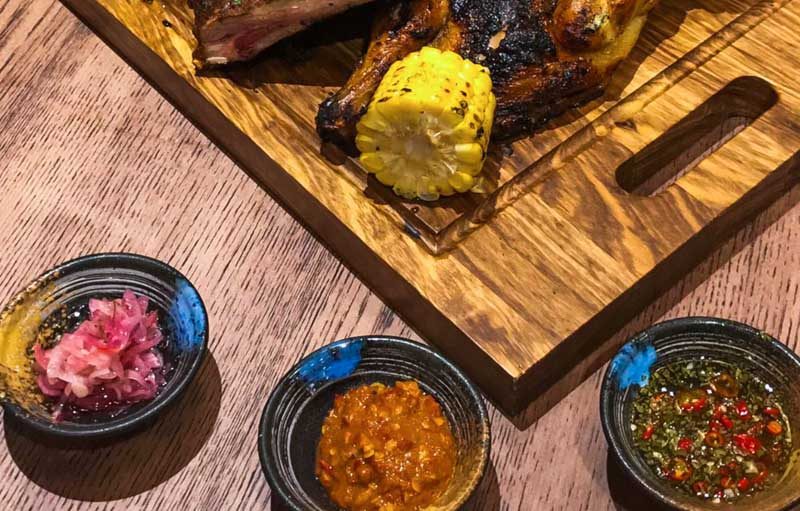 The platter came with very Asian condiments like shallot relish and lime, yuzu kosho (Japanese chilli paste) and duo sambal with lemongrass, emphasising what the flavours at Fat Chap are all about.

The tangy and spicy flavours of the accompaniments helped cut through the heaviness of the meats, offering a respite from any oiliness. Dunk every morsel of meat/seafood in for extra shiokness! Take a break from gorging on the platter to try some of the cocktails when you’re there. The Scented Mile (S$20) stood out the most, featuring a concoction of whiskey, lemon juice, chamomile juice, and egg white.

It was the lightest of all the drinks and paired the best with the strong Asian flavours. My only wish was that the chamomile flavour was stronger since it was a little muted by the lemon juice. Another memorable cocktail was the 1855 Fusion (S$20), made with bourbon, mint syrup, and lemon.

Personally, I’m not a huge fan of bourbon, especially when consumed with rich food. But I liked the hint of mint, which lifted the strong liquor and ensured it was a smooth blend. Now, you’re not going to get your squad together just to share one platter right? Order some side dishes like the Crispy Pig’s Ear (S$12) and Pulled Chicken (S$12) which really stood out.

The slices of pig ears were well-seasoned with five-spice powder, and were crispy yet stayed chewy enough. The texture of it might be unorthodox to some, but the taste was reminiscent of homemade fried pork lard, which is pretty darn delicious. 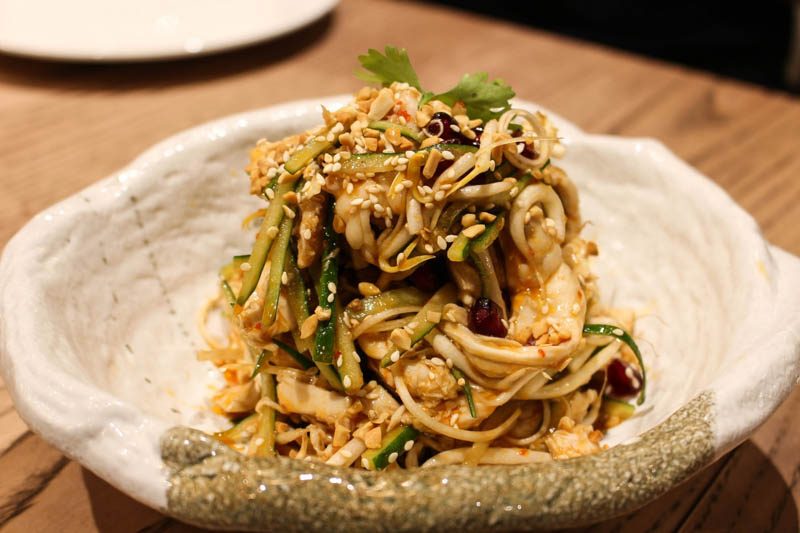 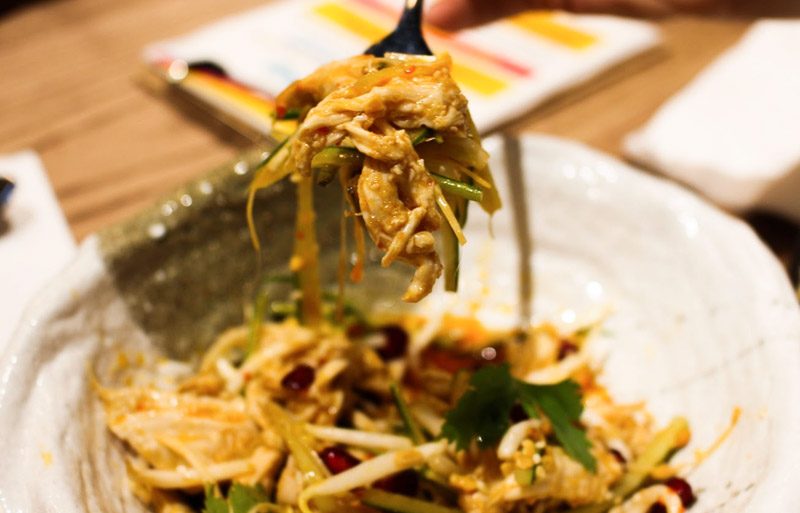 The Pulled Chicken was inspired by Mr Selamat’s travels to Guangzhou and the dish 口水鸡 (mouth-watering chicken), served cold and garnished with bean sprouts and cucumber.

With a mild spice level, this would be very palatable for groups with that one person who can’t handle much heat. 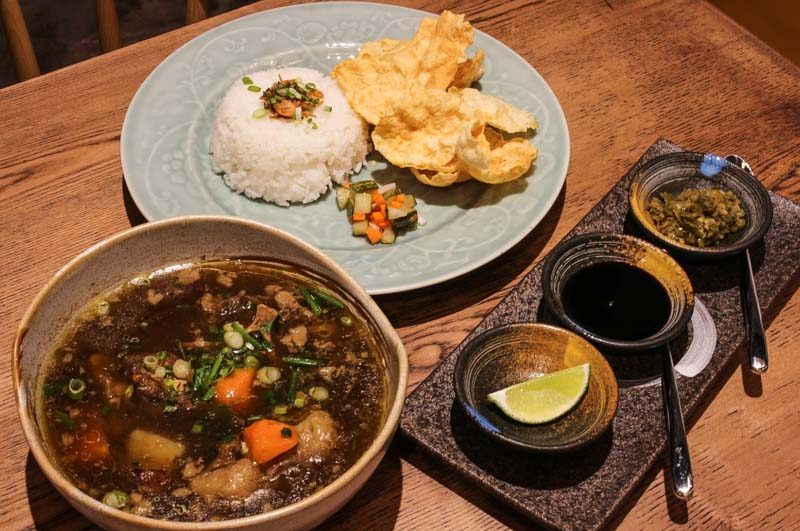 Lunch mains are also available from Monday to Friday, 11am to 3pm. Go for the Oxtail Soup (S$20) which was a standout, braised long enough to melt in your mouth.

I’d definitely recommend getting rice to go with this, as it’ll soak up all the complex flavours of the broth and reduce the oiliness of the dish. My meal there wasn’t without some misses – the Eggplant (S$8) under the ‘Robotayaki’ selection was too salty. Topped with a spicy garlic and chilli paste, the saltiness overpowered pretty much every other flavour and really lingered on the palate. 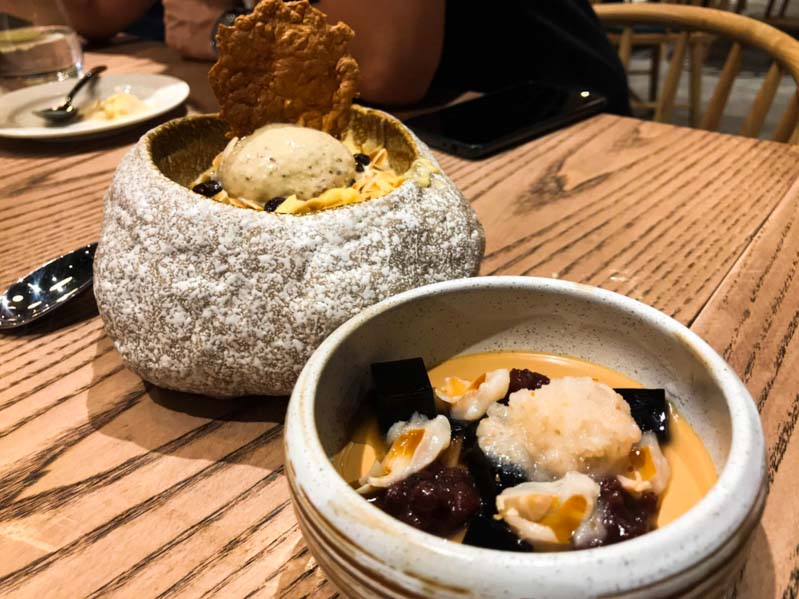 The Thai Milk Tea Pudding (S$12) that I had for dessert was also not for me. I could barely taste the milk tea, which was supposed to be the most essential ingredient.

Props to the homemade Azuki beans and lychee chunks for giving this dessert some bite though. My experience at Fat Chap thankfully ended on a high with the Klapertart (S$12) which was the cream of the crop. The various textures of this dessert worked very well together – coconut custard, rum-soaked raisins, roasted almond flakes, and rum and raisin ice cream.

A sharp-tasting cheddar cheese crust also neutralised the sweetness. The raisins were literally bursting with rum, and added a touch of bitterness to all the sugar. I’ll be back for this!

Delivering on its promise of serving strong Asian flavours, Fat Chap is well-worth a visit when you’re in Suntec City. The weekend brunch sharing platters make for a fun dining experience and the yummy cocktails are what weekends are all about!

*This post was contributed by Mavis Wong, a freelance journalist who’s keen on what people are eating, drinking, watching, sharing — or anything (new)s, really.