If you’ve dropped by Rangoon Road in the last few months, you might have noticed a new addition to the food establishments around the are. We went to Tie Fun Wan recently to try out the food, but today we stopped by to catch chef-owner Ken Chia in action. Born in 1976, 43-year-old Chef Ken Chia first discovered his passion for cooking at the tender age of eight, making it a profession by 16.

He’s only been reaching for greater heights ever since, flourishing in the Raffles Hotel and Marco Polo Hotel. He rose to the challenge as sous-chef at the Ritz Carlton and Fullerton Hotels, eventually becoming Head Chef at the Crowne Plaza Hotel. 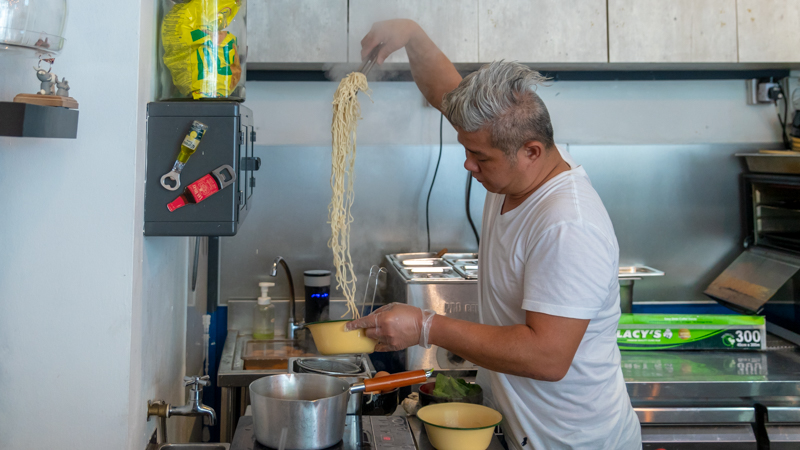 In 2013, Chef Ken decided to bring his experience —developed and refined in a decade at the most prestigious and demanding hotel restaurants — to his own kitchen. He set up Rice & Fries, which quickly became a local hit. In late 2018, he opened Tie Fun Wan, which prides itself on affordable and delicious local comfort food.

On hearing his story, many will be confused as to why a primarily Western-trained chef, after all those years, decided to venture into a completely different cooking style. Well, so were we, and luckily Chef Ken was around to answer a few questions.

On His Career as a Chef

Chef Ken started cooking at the tender age of eight. Born in a small town just outside of Kuala Lumpur, he was the eldest in a big Chinese family.

As both his parents worked, Chef Ken had a duty to cook for himself and his younger siblings — the beginning of a long and illustrious career as a professional chef. When he moved to Singapore, Chef Ken was under extreme pressure to perform. He knew that he was always one misstep away from losing his employment pass and his livelihood. 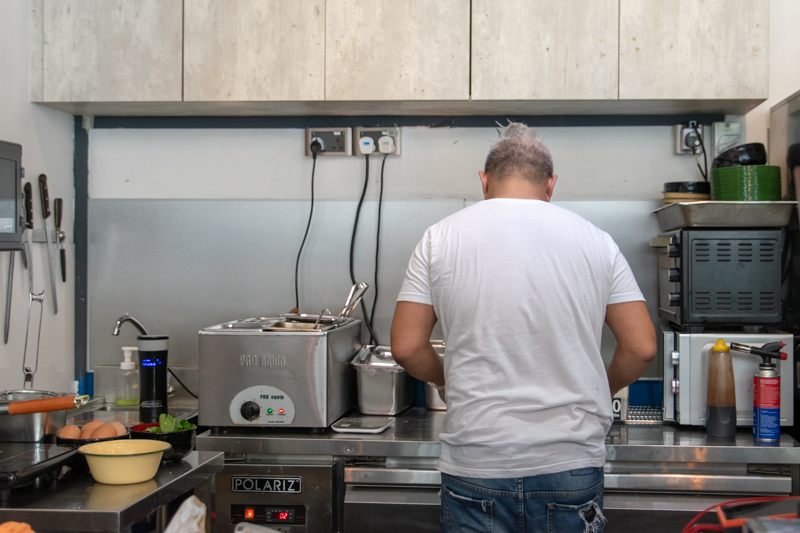 Being a chef is never easy, as many in the local F&B scene will tell you.

Chef Ken went months without seeing his family back home, constantly working around the clock and throughout the year, including public holidays. 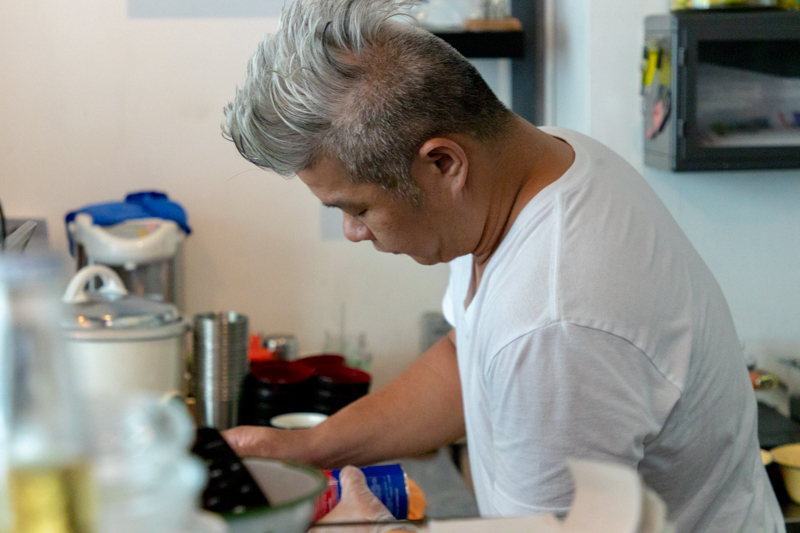 The learning curve in prestigious hotel restaurants can be overwhelmingly steep. Despite having no prior grasp of English, Chef Ken persisted against all odds, flourishing as a Western-trained chef.

He fondly recounts juggling English language classes and his hectic schedule, to better communicate and perform in the kitchen. 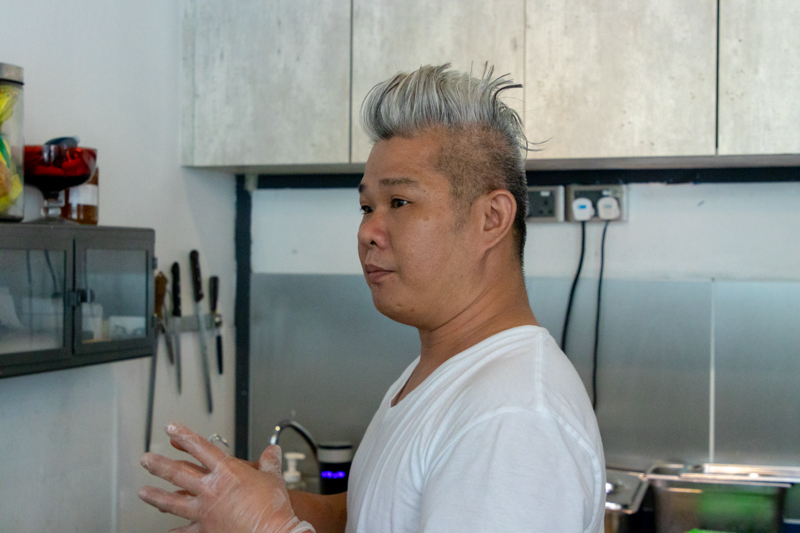 When asked about his career, Chef Ken humbly deflects compliments. He attributes his success to his understanding and supportive wife, as well as the “amazing chefs from all over the world” he has had the privilege of working under.

He singled out Chef Benton from his time at Ritz Carlton as the individual who always spent time coaching and motivating him, teaching him that anything was possible.

On His Cooking Style

Cooking started as a necessity for Chef Ken, but it quickly became a skill and his livelihood; cooking indeed is his “tie fan wan” (“iron rice bowl” in Chinese, meaning a job with steady income). 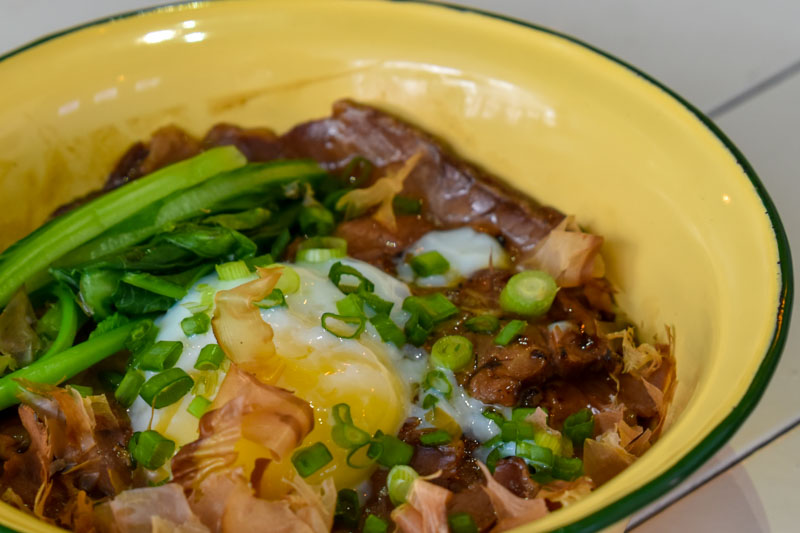 Chef Ken tells me that he has been cooking Chinese-style foods all his life, especially when preparing meals for his loved ones.

He makes what they enjoy the most, which often means homely comfort food, with liberal use of chilli padi, soya sauce and other Asian condiments. 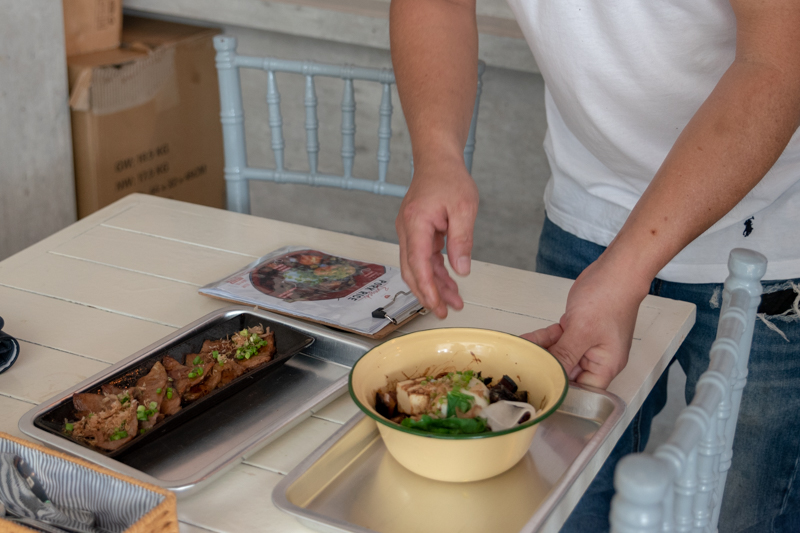 Therefore, despite having attained excellence within Western kitchens, he has always had an affinity for Chinese-style foods. Taking a leap of faith, Chef Ken has pursued the cooking style held closest to his heart with Tie Fun Wan.

That being said, Chef Ken believes that both styles of cooking require the same constant hunger for excellence, and openness to change. In fact, he has been honing his own style of cooking, which can best be described as a fusion of Eastern and Western styles, reflecting his personal history. 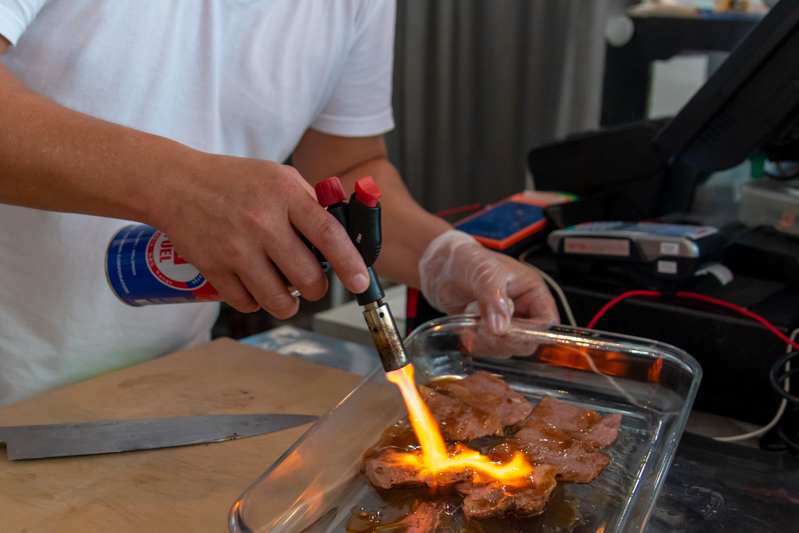 He employs his extensive knowledge of Western-style marination to ensure the tenderness and flavours of meats. He often uses a blend of spices, some of which are uncommon in Chinese cuisines but used in Western cooking. 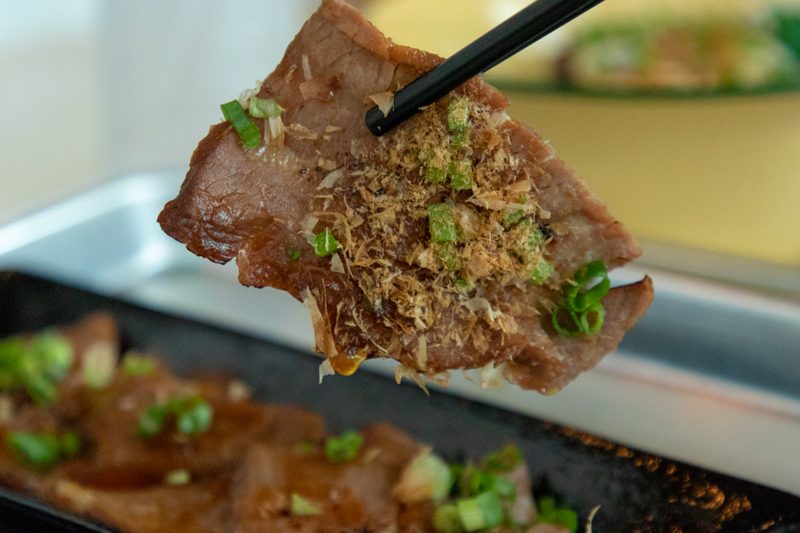 He claims that it helps elevate the dish and sets it apart from other offerings, which we certainly didn’t dispute after tasting his food.

Chef Ken still retains his dogged thirst for improvement, telling me that he still has many cooking techniques he hasn’t mastered. He recalls spending over a month trialling a deceptively simple hor fun before it was up to his personal standard.

When asked about inspirational characters, Chef Ken quickly names Chef Marco Pierre White, the youngest chef to ever attain three Michelin stars and tutor of celebrity chefs like Gordon Ramsay. Chef Ken admires his straightforward style of cooking that relies on the strength of the ingredients and quality of food rather than gimmicky decorations.

On His Personal Life

I agreed with Chef Ken when told that the item he was proudest of would be Lor Bak (Braised Pork). 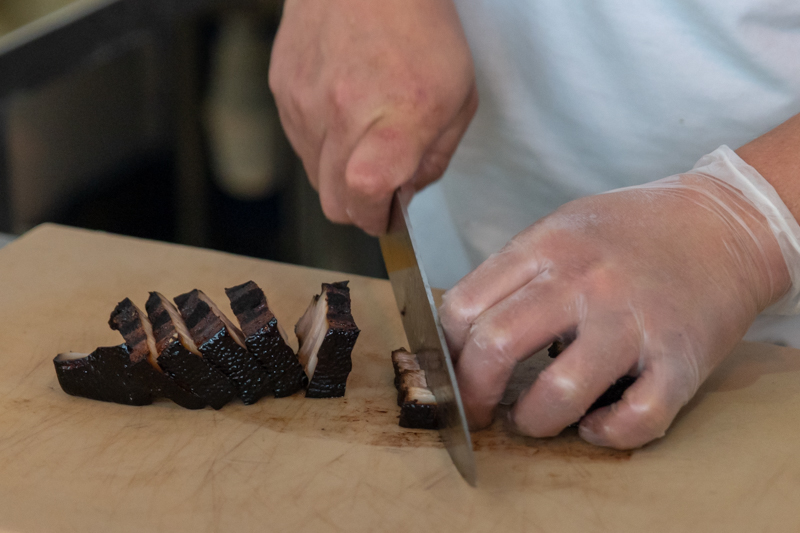 It’s very much his style; a return to tradition and roots with homely comfort food. 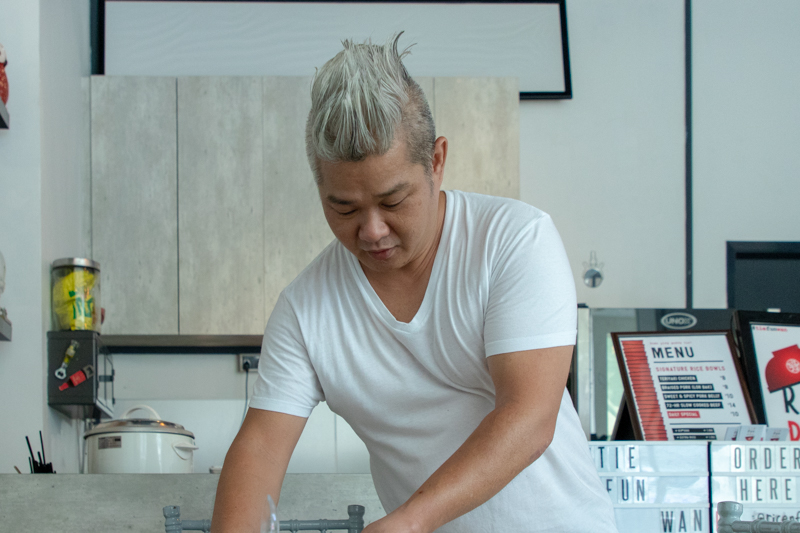 However, the dish that Chef Ken holds dearest to his heart isn’t something that is on the menu. When he was 22, Chef Ken, then a junior chef, met his wife, a part-time waitress.

He fondly recounts courting her with lamb shank, using the “excuse” that he needed someone to taste-test his new creation. The lamb shank certainly won over her stomach and her heart, and the two of them have been happily married ever since. 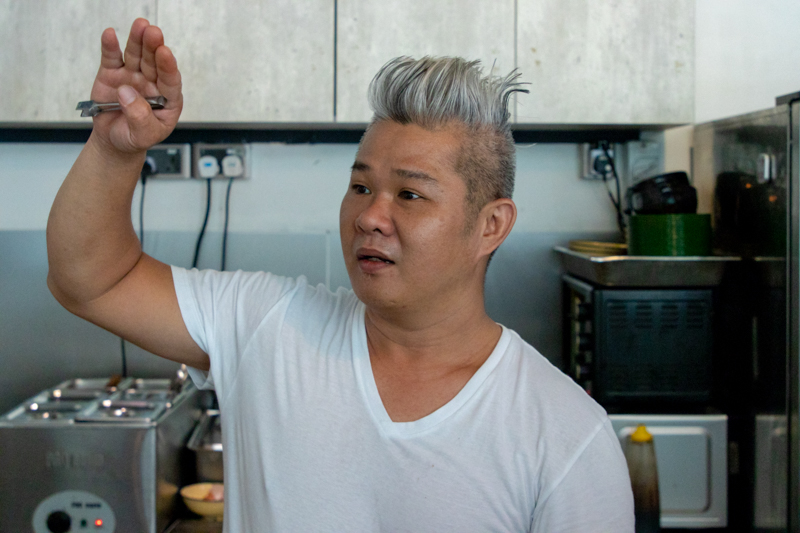 Chef Ken laughs when I ask him where his favourite place to eat would be. He candidly tells me that he enjoys eating around the Serangoon area after a morning of buying fresh produce at the market. However, his absolute favourite dish surprisingly is a simple bowl of rice and eggs, lovingly prepared by his mum!

Chef Ken sincerely hopes that the younger generation will relearn the techniques employed in local cuisine, and prevent traditions from being lost. 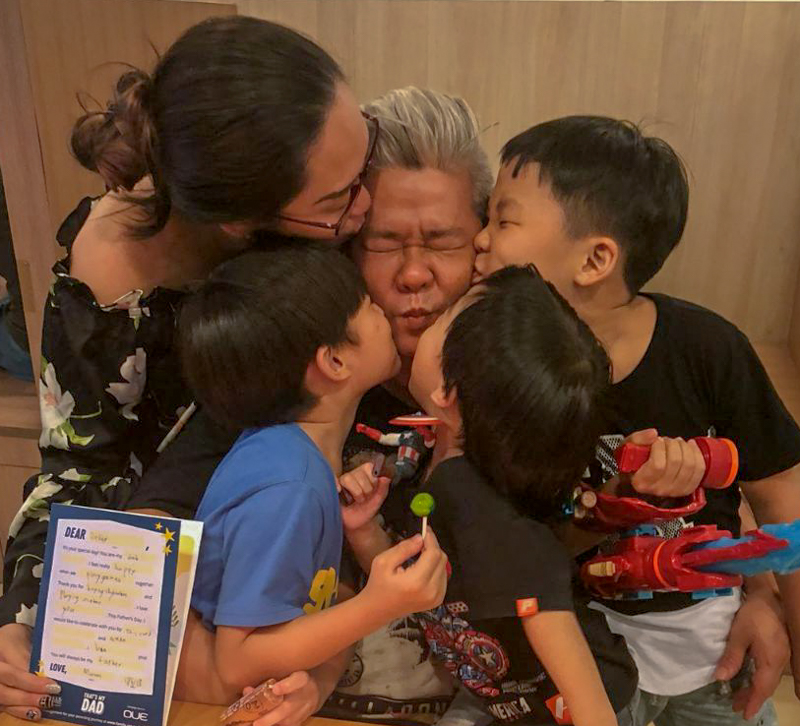 He hopes that the younger generation will follow their hearts and passions. Resilience and self-improvement are values that Chef Ken stands for.

To quote the man himself: “Good or bad, face up to it. You mess up, take lessons from it. Understand the job requirement. Work. Don’t complain.”