Soya sauce chicken has been around for the longest time—and so has Maria Virgin Chicken and Liao Fan Hawker Chan. It’s time to compare which is better—mentor or apprentice?

A traditional Cantonese dish, soya sauce chicken is considered a siu mei dish in Hong Kong. Siu mei is the generic name of Cantonese charcuteries, given to meats roasted on spits over an open fire or a huge wood-burning rotisserie oven. 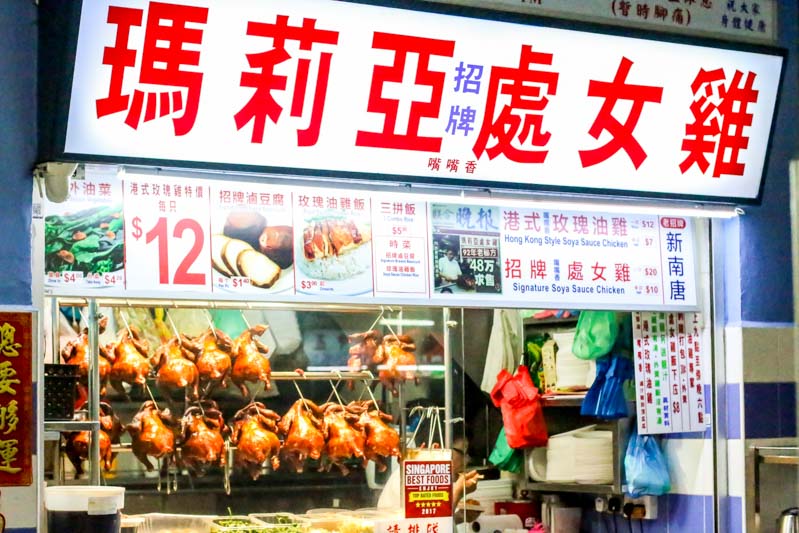 Opening Maria Virgin Chicken in 2017, Mdm Siew Phui Yang has been cooking all sorts of cuisines and courses since she was nine years old. Ranging from mooncakes and desserts, she quickly transitioned to making soya sauce chicken with a recipe passed down from her dad, created in 1926. At 72 years old, you can say that she has had over 60 years of experience when it comes to the culinary arts.

Located at Chinatown Food Complex Centre, Mdm Siew now makes a living solely selling soya sauce chicken rice. It’s no secret to anyone who visits Maria Virgin Chicken that Hawker Chan used to be Mdm Siew’s apprentice. Working together at a humble zi char stall, she took him under her wing and taught him all there was to know about cooking zi char dishes until they decided to part ways.

If you’re not already familiar with Hawker Chan, a quick Google search will unveil countless news outlets branding his soya sauce chicken as the “cheapest Michelin-starred meal”. It’s no surprise, considering that he started out as a humble hawker at Chinatown Food Complex Centre.

Just a stone’s throw away on Smith Street, Hawker Chan has opened his flagship store in close proximity to where he started out—possibly to pay homage to his humble beginnings and stay true to his roots. 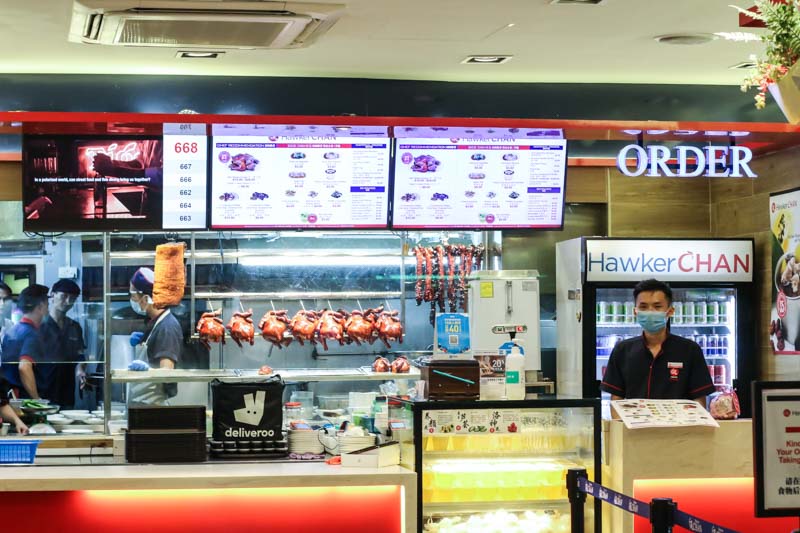 Collaborating with Hersing Culinary to open his first casual dine-in outlet, he subsequently launched two other branches in Tai Seng and along North Bridge Road. It might be easy (and common) to assume that standards drop when things get commercialised, but I decided to give it a try regardless. 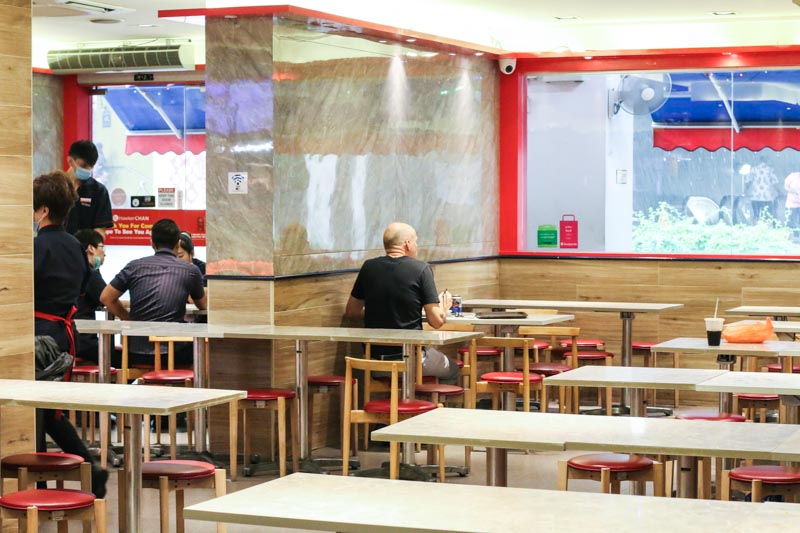 Furnished with rows of matching long tables and stools, the joint was fully air-conditioned, reminding me of bustling food courts at shopping malls. 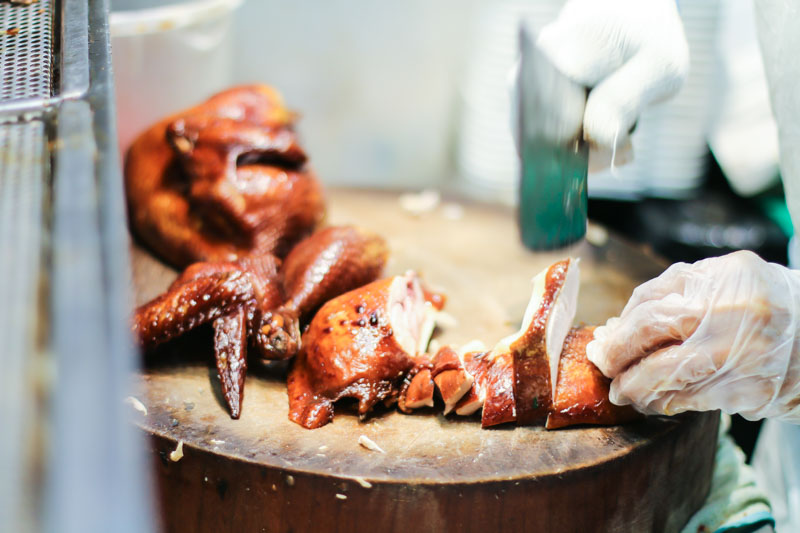 Like any other hawker stall, Maria Virgin Chicken’s Mdm Siew let me watch as she skilfully butchered the whole chicken with grace.

Whilst preparing my food, Mdm Siew spared a few minutes to chat with me—a human touch I really appreciate when I eat out.

Down at Liao Fan Hawker Chan, I could only see rows of braised chicken hung on the iconic metal rods you see at hawker centres. If I looked hard enough, I could peer into the kitchen but it wasn’t as intimate as I wanted it to be.

Because of that, I couldn’t see how my food was being prepared. The ordering process was like that of fast food chains with kiosks—you order and wait for your number to be called. As Mdm Siew served up the plate of Soya Sauce Chicken Rice Set (S$5.50), the fragrant smell of the soya sauce gravy wafted through the air. Unlike traditional soya sauce chicken rice served at other stalls, Maria Virgin Chicken serves chicken rice instead of plain rice. Upon trying the chicken rice, it was so satisfying that I could just eat it on its own.

The set came with a generous portion of chicken, drenched in glistening brown soya sauce gravy. On the side, I had kai lan and braised beancurd. 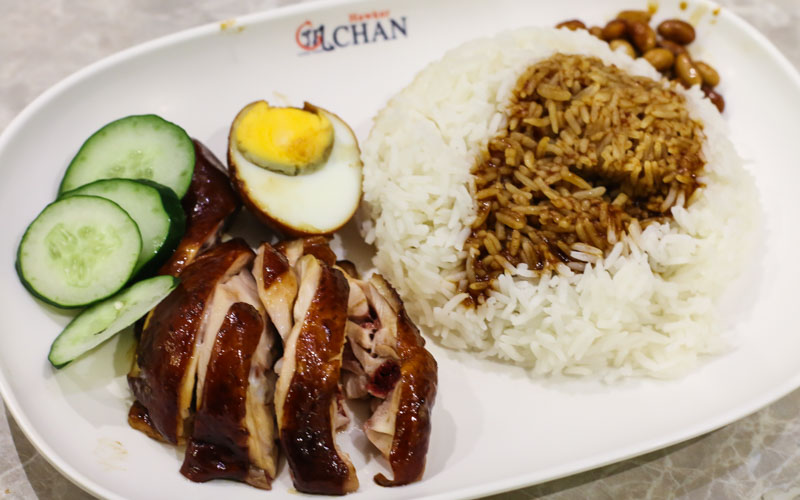 It was very different at Liao Fan Hawker Chan. Skin browned to a darker shade, the Soya Sauce Chicken Rice (S$5) was served alongside a braised egg, sliced cucumbers and nuts. 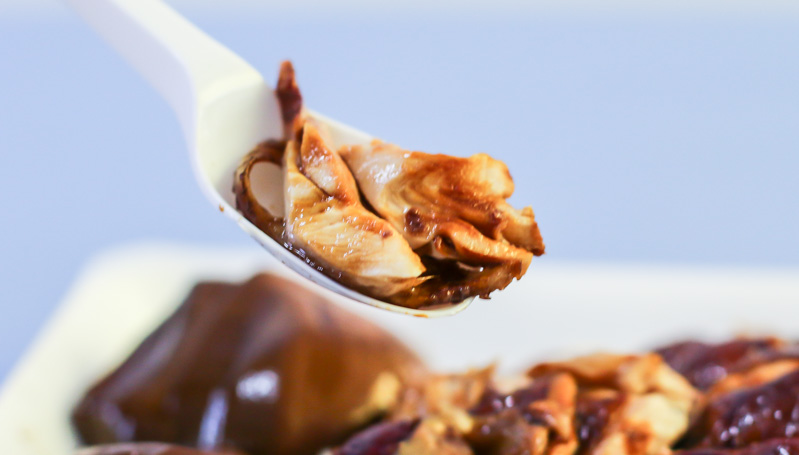 At Maria Virgin Chicken, I was pleasantly surprised to see that the chicken has been completely deboned for me—just the way I like it. The meat was fragrant and was drizzled with Mdm Siew’s secret homemade sauce. Right off the bat, I detected a hint of sweetness in the salty sauce. Extremely tender, I could tell that the chicken had been cooked to perfection.

Providing a nice bouncy texture to the dish, the skin was absolutely delectable. The meat was really soft, possibly one of the most tender soya sauce chicken I’ve ever had. 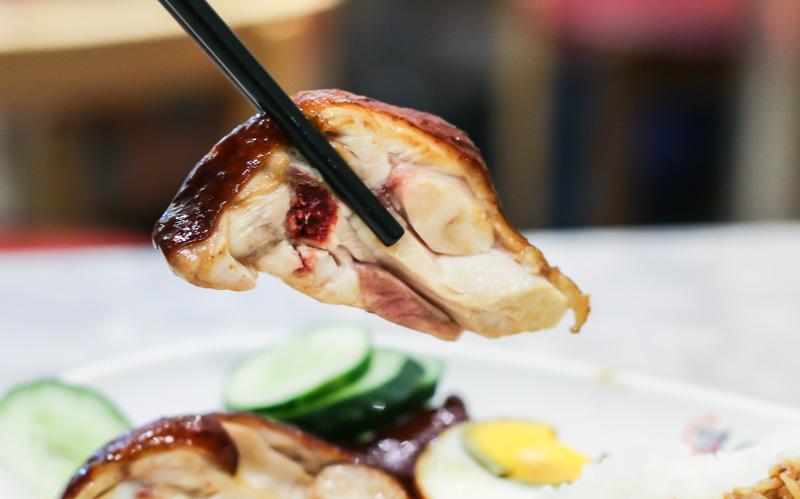 The same could be said about Liao Fan Hawker Chan’s chicken. Although not deboned, the meat was soft and succulent, and the skin was beautifully glazed with soya sauce. The skin was light and bouncy, but thinner than Maria Virgin Chicken’s.

However, it wasn’t fully marinated or drizzled with soya sauce, I could only detect a slight burnt barbecue taste on the skin. The flavour was somehow lost when it came to the centre of the meat, and I felt a little dismayed. The rice used was the usual plain white rice, but after trying the soya sauce chicken with chicken rice, I found that the latter was more suited to my preference. 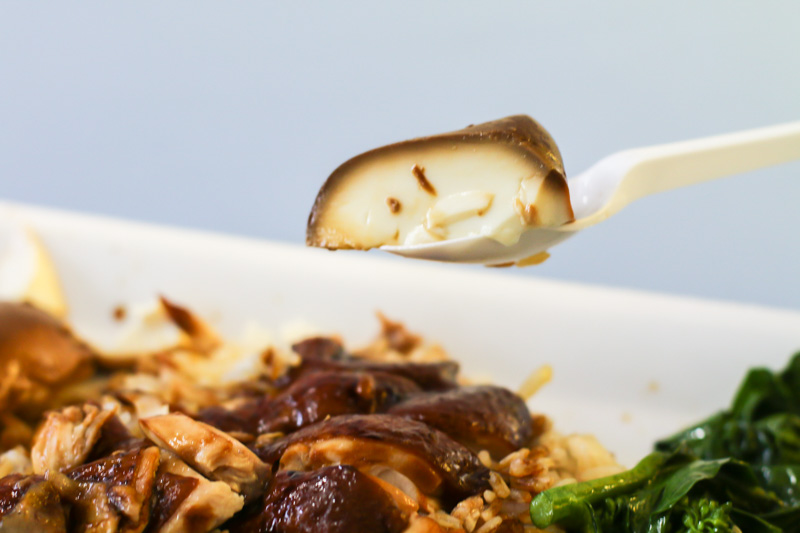 One of Mdm Siew’s best-selling dishes is her beancurd. Swearing by how good it tastes, Mdm Siew told me that this beancurd might even be better than the chicken itself.

Marinated in the same secret homemade sauce, the tofu was silky smooth and extremely easy to slice into. No words can describe how the outer layer of the beancurd made me feel—it was the perfect level of salty and braised flavours. I even picked up a small tinge of tanginess.

The taste of the sauce came in strong, but the tofu retained its soy flavour on the inside. My dining partner even commented that this was comparable to premium Japanese tofu! 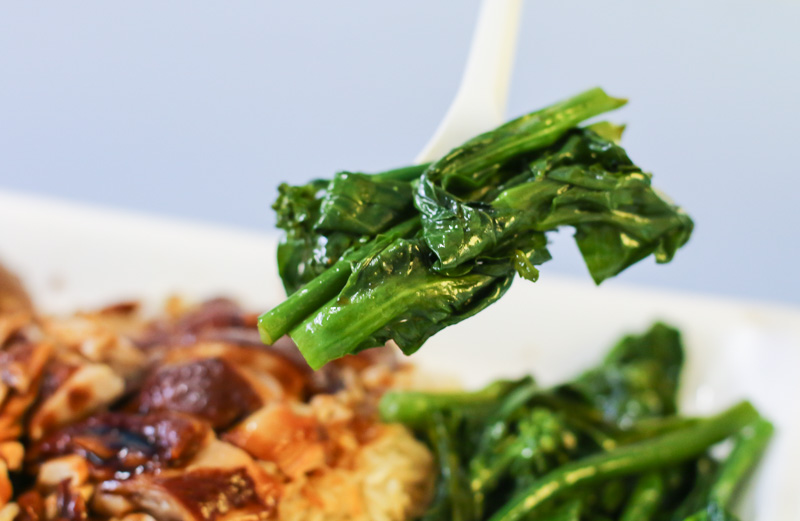 The kai lan served with the set was absolutely delicious. Lightly seasoned, it was crunchy and chewy. What I loved the most was that it was not too oily, and yet it still tasted superb. 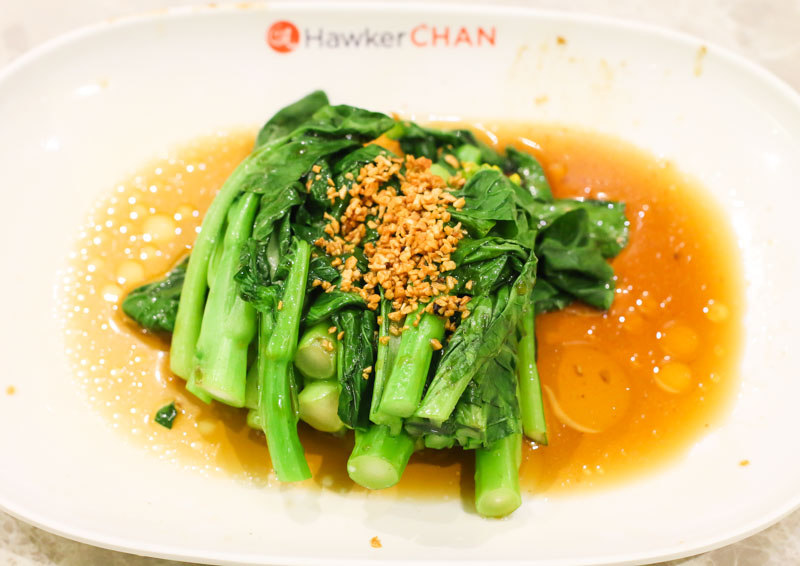 Compared to Maria Virgin Chicken’s kai lan gravy, this was definitely sweeter. Sesame flavouring shone throughout, and I found this absolutely delicious. The problem was that these vegetables were not available as a set meal with the soya sauce chicken, so I had to get a separate serving of kai lan. 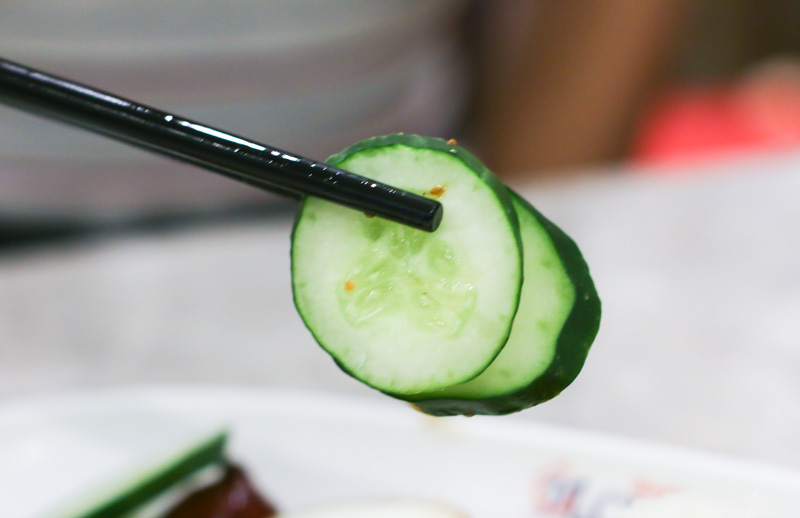 Cucumbers were added into Liao Fan Hawker Chan’s overall dish, adding a nice refreshing crunch to the steaming hot plate. If anything, it also works as a palate cleanser, or a revitalising snack to munch on amidst the “heavier” flavours. 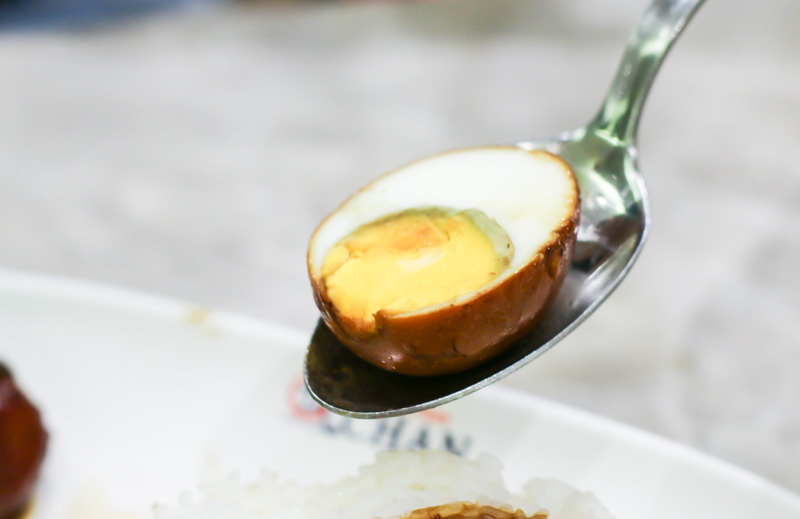 A side of the dish, there was the iconic braised egg you typically get when you order roasted dishes. This didn’t leave much of an impression on me—in fact, this was the most mediocre part of the soya sauce chicken rice.

After mulling about it for a week—because both soya sauce chicken places had their own distinct taste and ways that made them uniquely delicious—I finally decided on a winner.

Maria Virgin Chicken had delicious fatty skin, and that beancurd was godsent. Liao Fan Hawker Chan had its plus points in the vegetables, it might even be the most affordable zi char dish I can find out there.

Both places offered succulent, tender chicken meat, but there can only be one winner.

Because it is a soya sauce chicken showdown, I decided to go with the place with the better meat, and that is Maria Virgin Chicken. 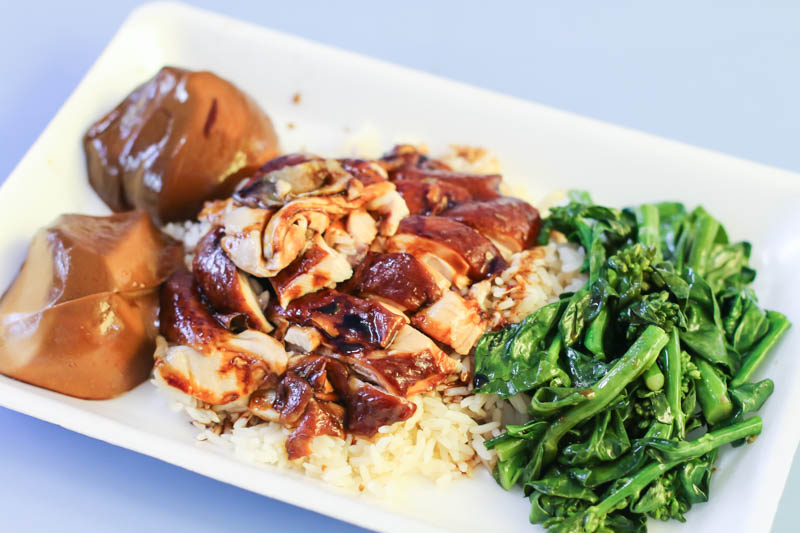 The skin at Maria Virgin Chicken was thicker and more fatty, which was to my preference. Pairing the soya sauce chicken with chicken rice was also a smart move, because it elevated the entire dish to a new level of tastiness. For what it’s worth, I think that Maria Virgin Chicken definitely deserves a Michelin star.

The prices also played a part in my decision, because a plate of soya sauce chicken rice at Maria Virgin Chicken is S$5.50, including the kai lan and braised beancurd. If I were to add both dishes at Liao Fan Hawker Chan to include the vegetables, the price would total up to S$10. That makes Maria Virgin Chicken the best bang for your buck.

If you’re out around Chinatown Complex in the mood for soya sauce chicken rice, I would recommend you go to Maria Virgin Chicken. I can guarantee you’ll love it as much as I did.

Previous article12 Hidden Gems You Have To Try At Albert Market & Food Centre After Your Romp Around Bugis Junction
Next articleTILY Tea: Combining Traditional Chinese Medicine With The Art Of Drinking Tea