The local hawker scene was once unpopular among the millennial crowd with the cafe trend kicking in years back. However, traditional local food can only be found hidden in hawker centres, leading to the surge in hawkers’ popularity as millennials look for a dish that gives them a blast from the past. 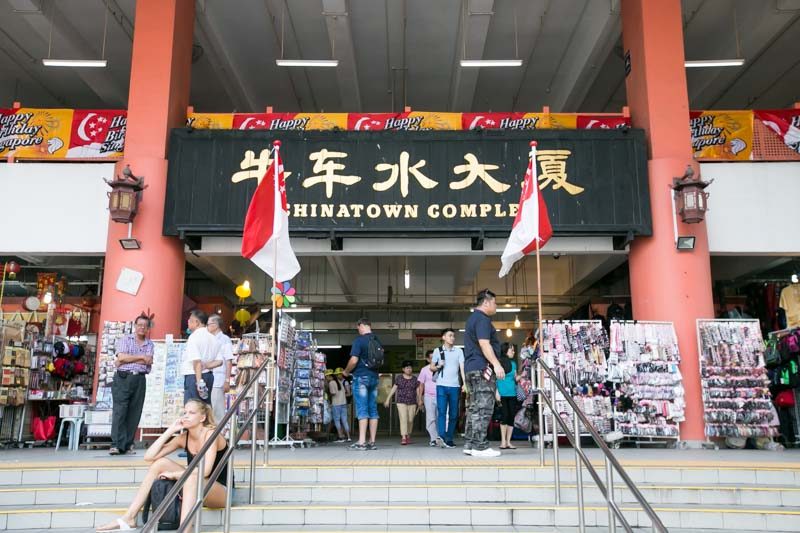 Chinatown has always been known to be an “old people” district, but that also means that many hawkers have set up shop there selling local delights that these elderly ate as a staple.

The Chinatown Complex Food Centre boasts over 200 stalls, but here are 10 that caught my eye and delighted my stomach. At 2.30pm, Zhong Guo La Mian Xiao Long Bao (中国拉面小笼包) was preparing to close for their afternoon break. Lights were unlit to give the impression of a stall that was not open.

But that was no deterrence to the steady stream of customers who walked up to the storefront to try their luck, myself included. This mother-son duo sells homemade xiao long bao (小笼包) amongst other authentic Szechuan dishes like Zha Jiang Mian (炸酱面) and beef noodles. The 小笼包 (S$6/10 pieces) were the cheapest I’ve seen thus far, and I couldn’t help but order a portion to feed the 小笼包-addict in me.

Biting into these steamed buns, they exploded and the juice oozed out. The meat was sweet with a hint of saltiness and was wrapped in a thin skin that held the juices without breaking during the steaming process.

For just 60 cents apiece, I’d order this during my next visit here. Many stalls here at Chinatown Complex Food Centre cater their dishes to the elderlies who are frequent patrons. Grand Stewed Herbal Soup (豪华滋补炖汤) is no different. We tried the Imperial Herbal Chicken (S$6.50) with a whole kampung chicken that was slow-boiled for over six hours. The juices from the chicken infused with the herbs to create a broth was that left me pleasantly surprised.

I had anticipated a heavily salted soup that most places served up but the first spoonful of soup was light without being bland. The chicken itself was pull-apart tender and fell off the bone with just a nudge from my chopsticks. This herbal chicken sure warmed my heart (and stomach). 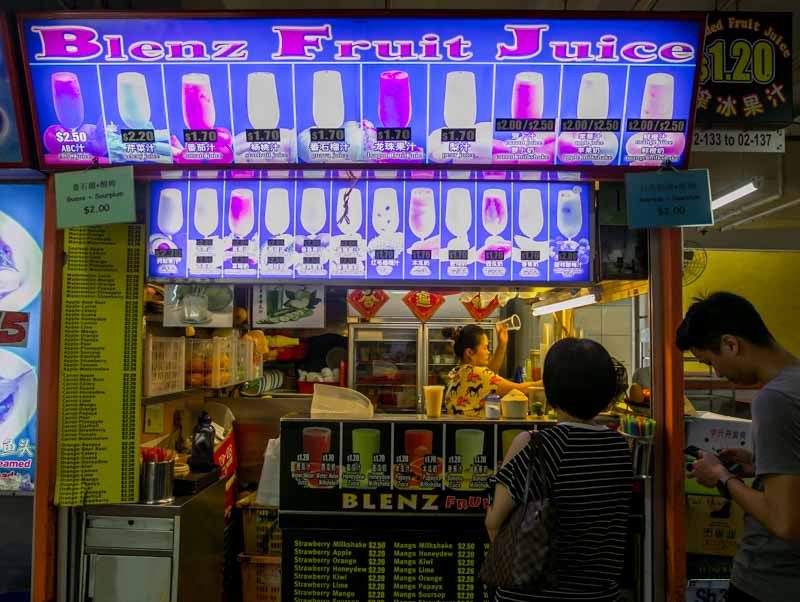 Given Singapore’s hot and humid weather, the drinks store is usually the first thing I look for when I dine at hawker centres. I was distracted by the 小笼包 during my search but just two stalls away, Blenz Fruit Juice caught my eye. 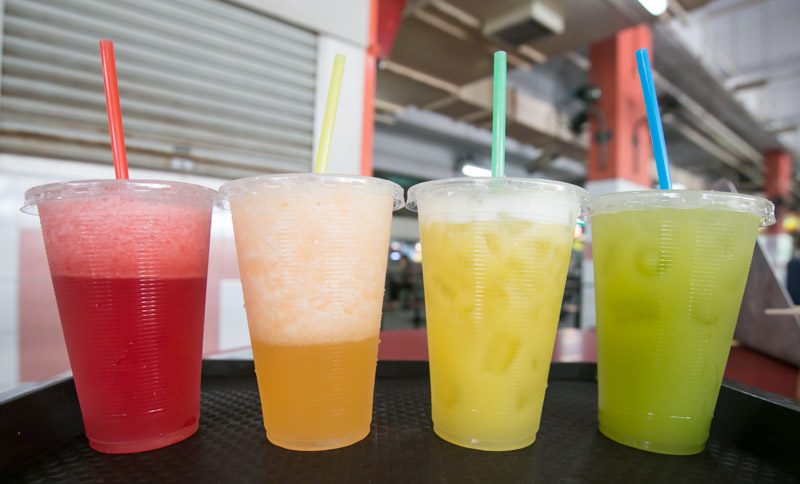 For those who enjoy the occasional glass of fruit juice, I’ll recommend trying either the watermelon or honeydew juice. For those who prefer the acidity in their juices to wake-up their palates, the honey pineapple and lime comes with a refreshing kick. 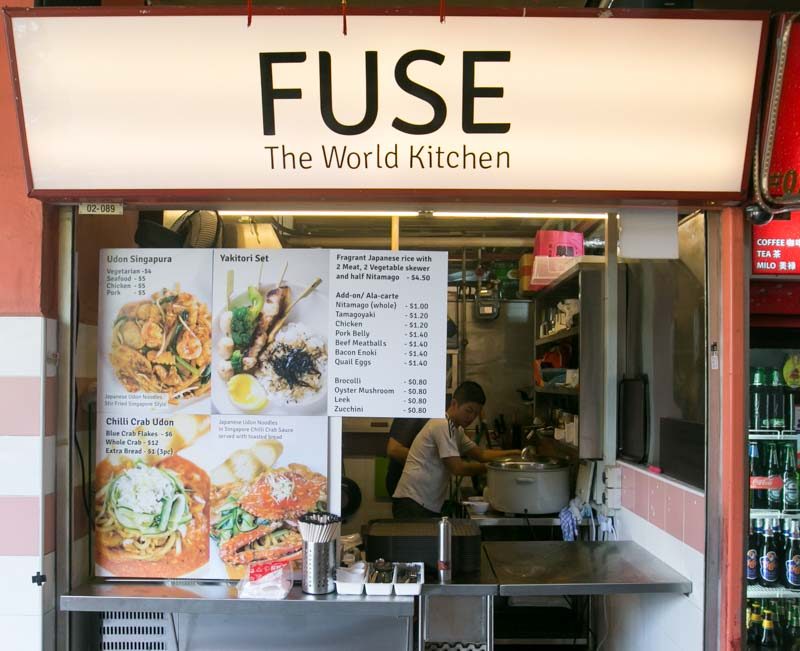 FUSE: The World Kitchen is a newly opened store when I went down in August 2018. As its name says, the style of cooking literally fuses the worlds’ kitchens — think fusion without the extravagant costs of restaurants. We tried the Chilli Crab Udon with Blue Crab Flakes (S$6) because the whole crab version was unavailable at the time of our visit. A generous portion of udon was stir-fried with egg, topped with cucumber ribbons and blue crab flakes, with homemade chilli crab sauce drenched all over, served with a side of garlic bread and tamago (Japanese omelette) skewer.

The chilli crab sauce was not as jelak as we had anticipated, and had been watered down so as not to overpower the delicate sweetness of the crab. However, it was slightly too watered down and didn’t coat the udon as well as I’d hoped it would.

Nevertheless, the flavours were there, and it’s always a good thing to support our local hawkerpreneurs. 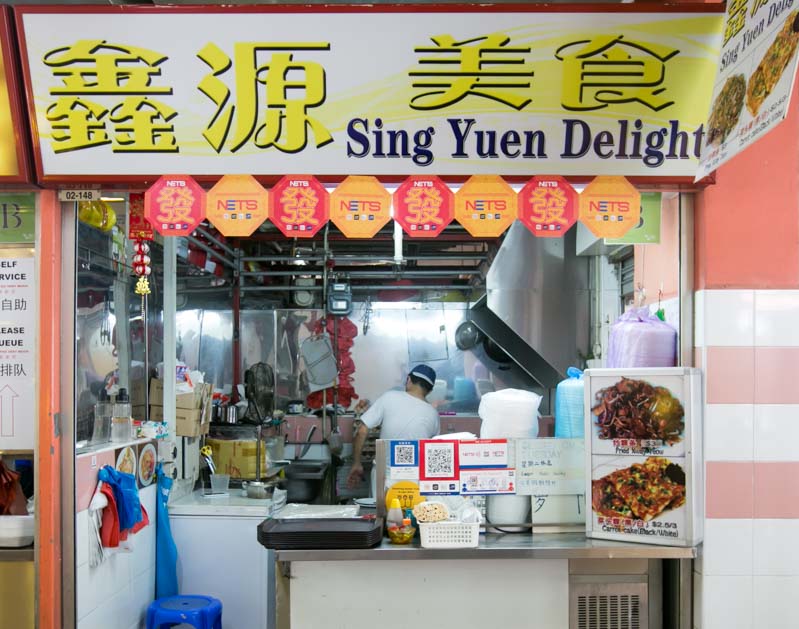 Sing Yuen Delight (鑫源美食) is one of the many stalls in Chinatown Complex Food Centre that still believe in wok-frying to retain that authentic charred taste of the dishes. 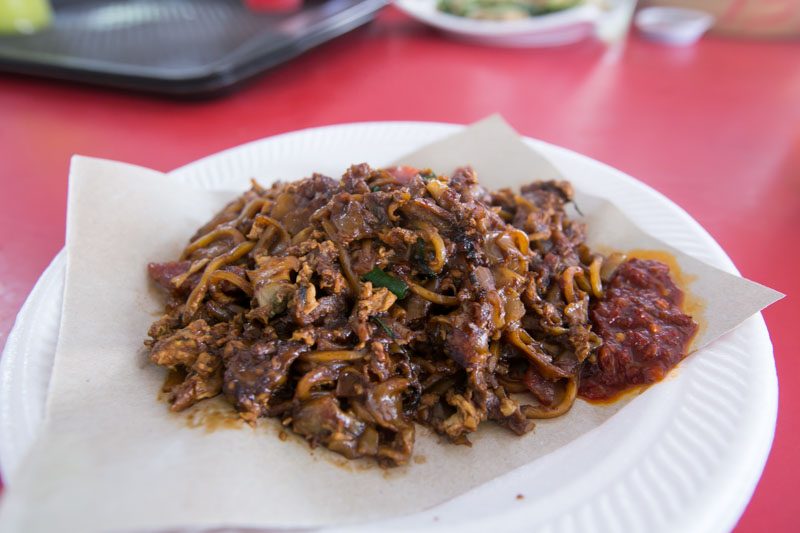 We tried the Fried Kway Teow (S$3) that reminded me of the mouthfuls of noodles I used to steal from my Father’s plate whenever we dined out and he ordered it from the hawker centre opposite our house.

Fried with dark soy sauce, see-ham (cockles), Taiwan sausage and bean sprouts, it was no wonder the stall closes at 4pm. I was lucky enough to get the last order in before he closed for the day and was not disappointed. 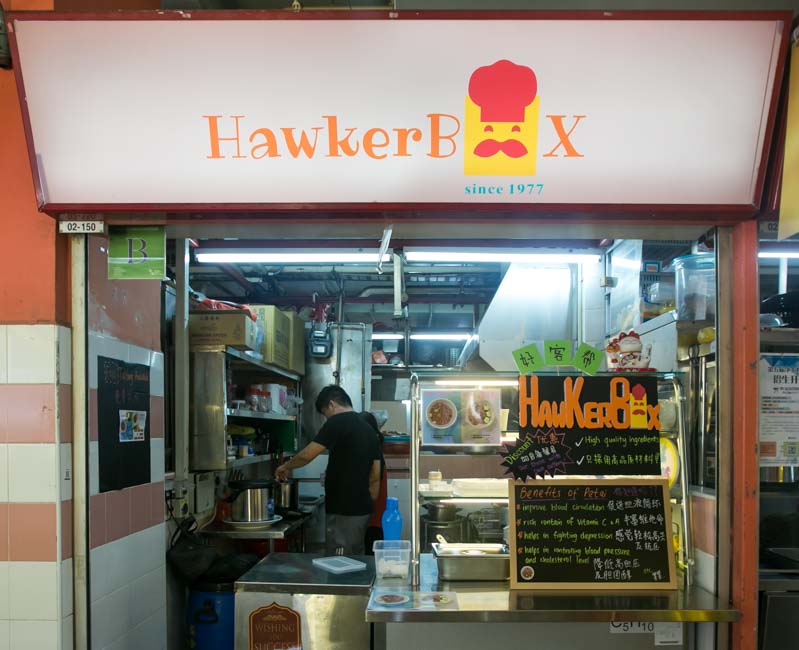 Hawker Box is another stall who aims to change the stereotype that hawker food is unhealthy due to the amount of oil, salt and msg that goes into the dishes. 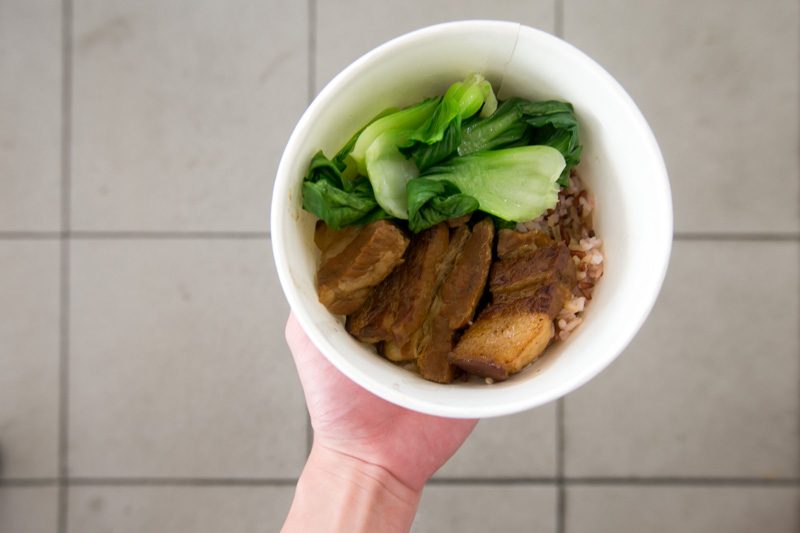 We got the Braised Pork Belly with Petai (S$5) and was slightly disappointed. We’d ordered a portion to get a taste of petai (bitter bean) that supposedly help improve digestion and overcome hangovers. However, we didn’t get a hint of petai which was rather disappointing.

With only four pieces of one-centimetre thick braised fatty pork belly, we found it rather overpriced, especially since it was being sold in a hawker centre. The pork belly could have been braised longer for a melt-in-your-mouth texture, but the salty-sweet flavours were present and brought me back to the days spent in Taiwan. 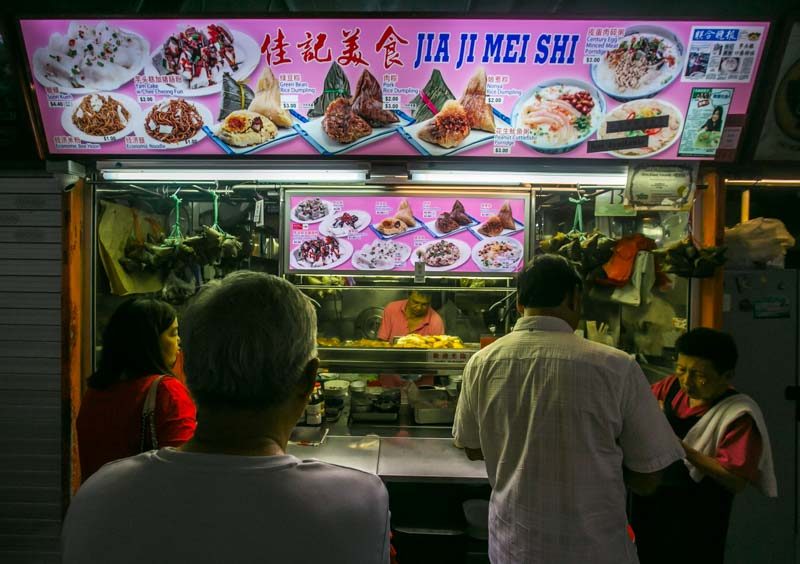 As a child, weekends meant waking up to traditional breakfast my parents would tapao home. Jia Ji Mei Shi (佳記美食) sells these traditional local dishes at prices seemingly similar to those of the olden days.

But don’t be fooled into thinking that at 3pm, there would be no queue just because it is usually a breakfast dish. Undecided between chee cheong fan and yam cake, we opted to get a plate of Yam Cake with Chee Cheong Fan (S$2). Drenched with homemade chilli and sweet black sauce (we opted to get ours on the side just for the ‘gram), it was a dish that lasted through the years.

The yam cake was soft without being mushy, while the chee cheong fan had a firm bite to it. But don’t be fooled by this seemingly small portion because I couldn’t finish it on my own. Chinatown Complex Food Centre indeed lives up to its name of being a hawker centre that is home to many local traditional food items. Amongst the handful of stalls islandwide that still sells homemade popiah, Ann Chin (安珍) is one of them. 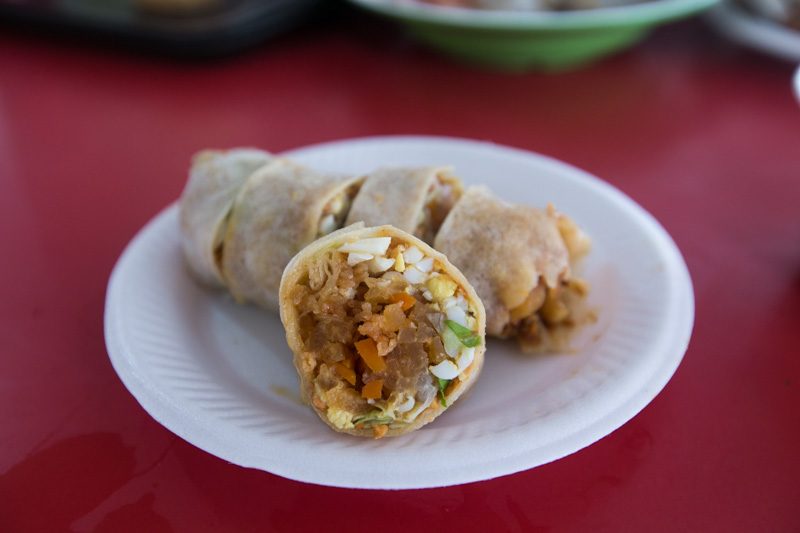 The Popiah (S$1.60) was stuffed to the brim with a variety of ingredients, from turnips to hard-boiled eggs and not forgetting that iconic sweet soy sauce. Peanuts were sprinkled generously throughout this popiah, complementing the other elements that otherwise, are rather bland on taste. 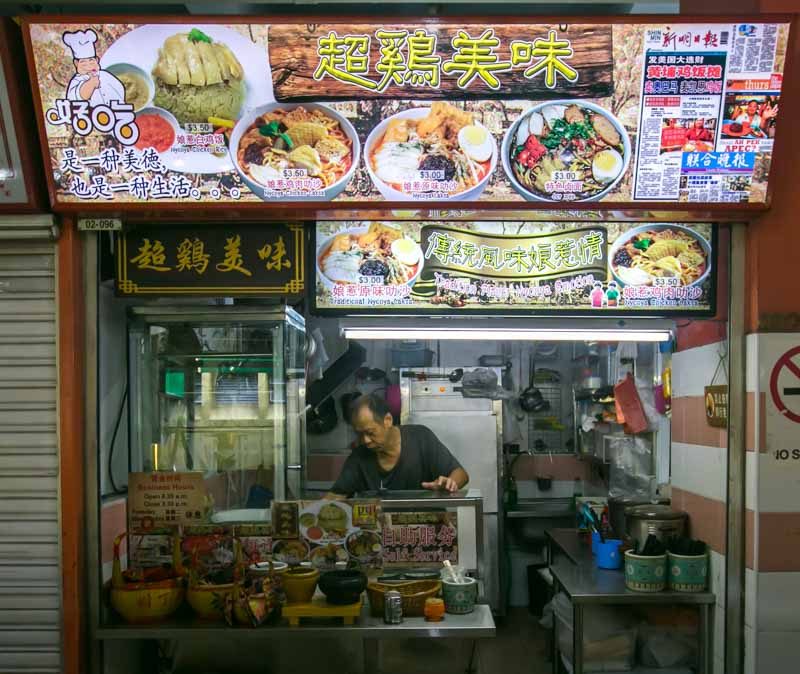 Most noodle stalls have fishball noodles, prawn noodles and laksa on their menu, Traditional Nyonya Flavour Emotion (超鷄美味) is no different but their best seller is their signature bowl of laksa. 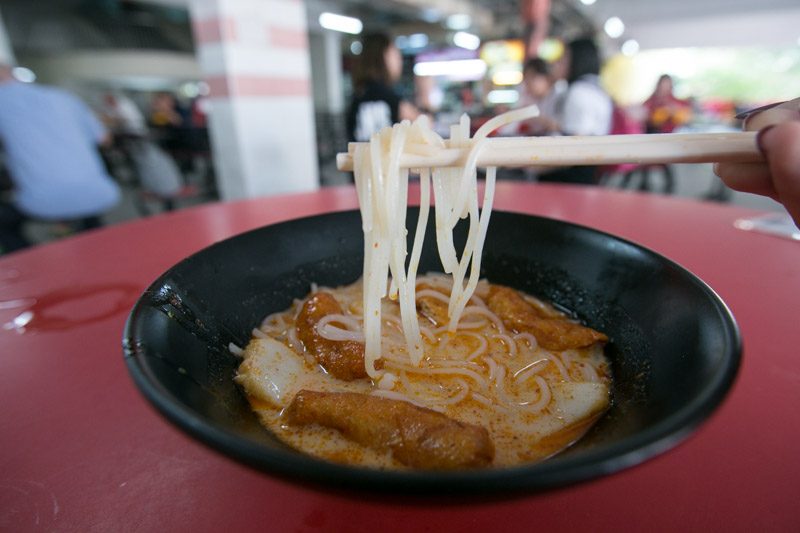 The Traditional Nyonya Laksa (S$3) was smaller than expected but for someone with a small appetite like mine, suited me just fine. Quantity aside, it really delivered with its distinct taste profile.

Springy thick bee hoon was drench in a laksa broth that had a higher concentration of coconut milk which I loved. Topped with fish cakes, tau pok (tofu puffs), laksa leaves and a homemade chilli, the strong coconut milk abated the spiciness of the chilli and wasn’t too jelak. The broth was lighter than expected and I devoured the bowl despite a rather full stomach. 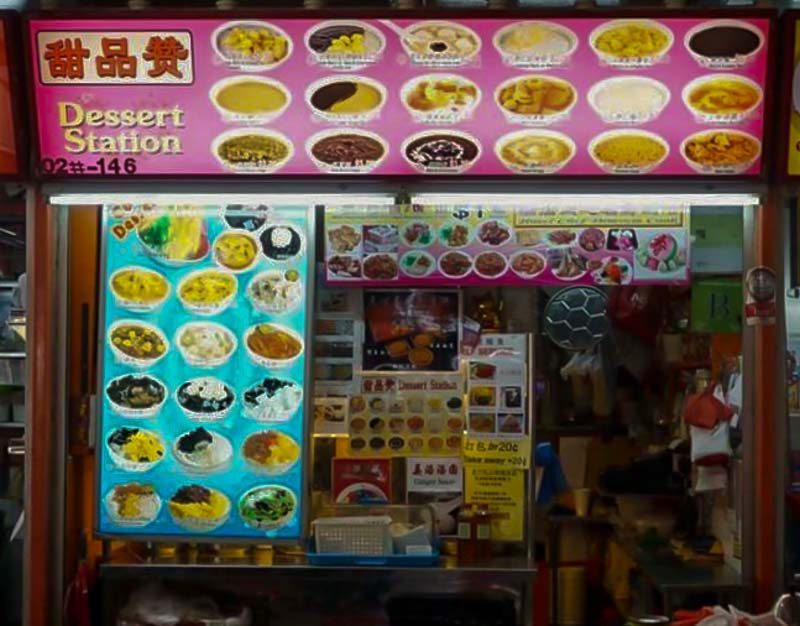 No meal is complete without a round of dessert and Dessert Station (甜品赞) seemed like it was every patron’s choice of dessert; we’d seen their iconic yellow bowls on nearly every table at the Chinatown Complex Food Centre and wanted to see what all the hype was about.

I wanted to try the Bur Bur Cha Cha but they’d ran out of the colourful jellies I love so much. It’s one of their best sellers so I guess they were sold out by the time I ordered at around 4pm. Instead, I tried a classic Ice Kachang (S$1.60). Shaved ice was piled onto a mixture of colourful jellies, atapchi and red beans, and various flavoured syrups were drizzled atop. Ice kachang has been a childhood classic and I’ll definitely be back to try their ever-so-popular Bur Bur Cha Cha.