Fratelli: A Symphony Of Exquisite Italian Plates By Michelin-Starred Chef Roberto At Sentosa ‘Fratelli’ stands for ‘brothers’ in Italian, so you can expect dapper services at this all-day Pizzeria, as well as a Trattoria, which opens only for dinner service. The large and open Pizzeria area is warm, inviting and great for families — the tables are even laid with a layer of drawing paper and a cup of crayons during opening hours to keep the kids occupied with doodling while waiting for their food. On the other hand, the Trattoria side of the restaurant boasts a sleeker industrial and formal vibe — suitable for dates or business meetings. From here, you’ll also have a great view of the inner workings of the main kitchen. 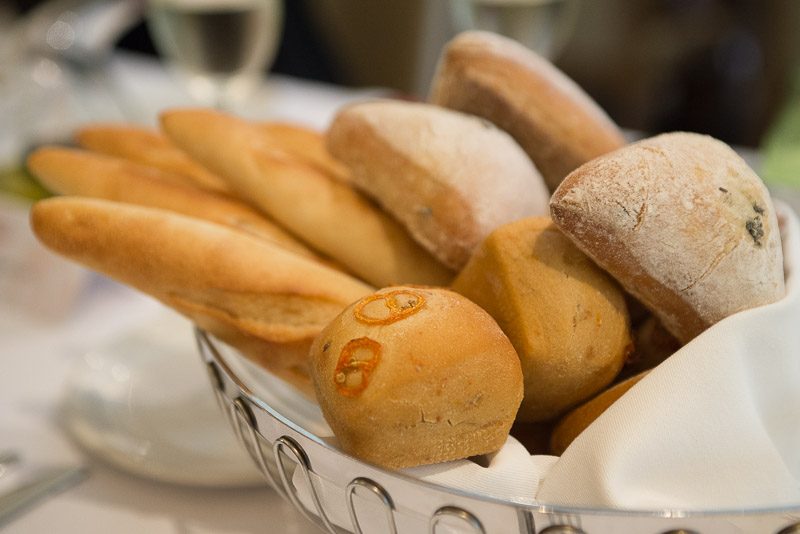 We started our meal off with an assorted Bread Basket (Complimentary), which we paired with some extra virgin olive oil and balsamic vinegar. Butter is also available upon request but I personally preferred the rich fruity aroma of the olive oil. 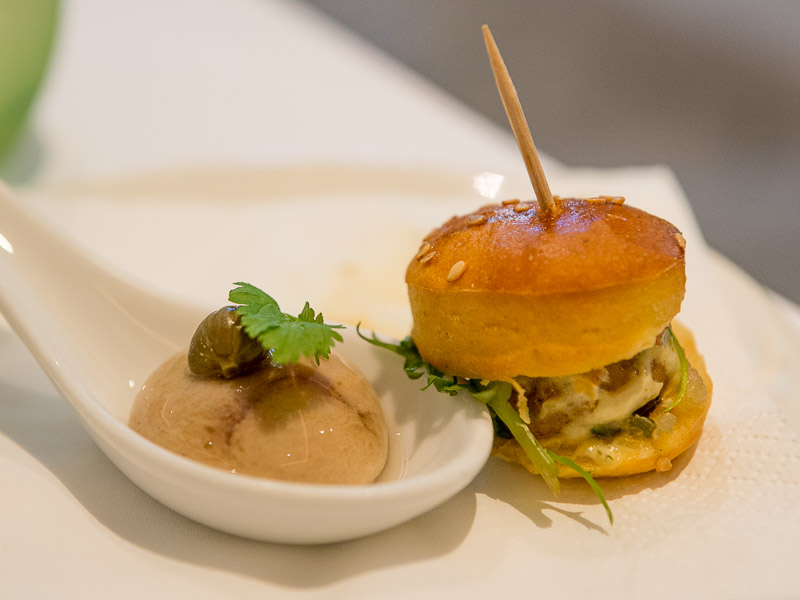 Our amuse-bouche (complimentary) came in the form of two small bites. The first was a canape of tuna and veal (left), and a cheeky play on McChicken from the Golden Arches with curry sauce in the form of a mini slider.

While the veal’s chewier texture was discernible, the same couldn’t be said for its taste, as the tuna claimed dominance flavour-wise. As for the slider, it was a pretty faithful rendition of the McChicken, down to the texture of the patty, even the curry sauce was at least 80% similar.

While it definitely displays the chef’s discerning palate and skill in replication, I’m not sure if mimicking a fast-food dish was such a good idea. Perhaps a play on something more local like laksa or chicken rice would have been more fitting for such a fine-dining restaurant. 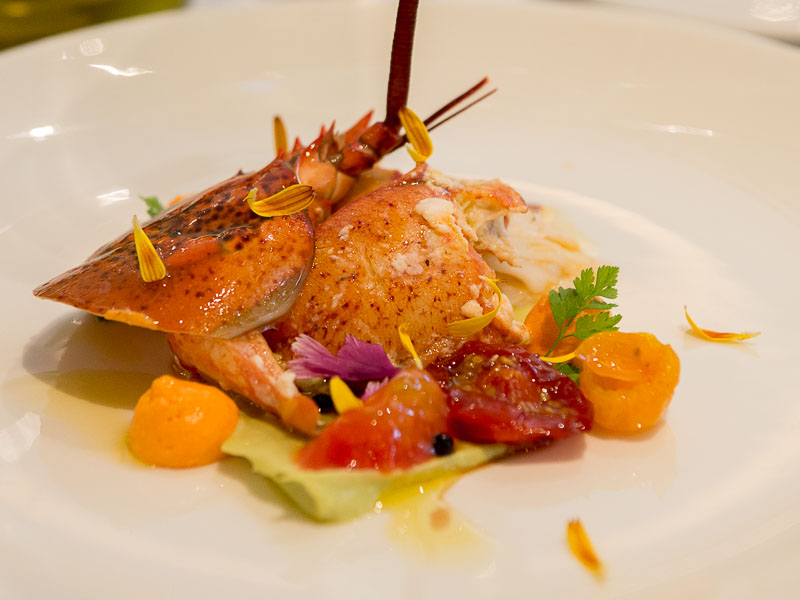 The proper menu came roaring right out of the gates with no punches pulled with its appetiser: Steamed Boston Lobster with Avocado & Wasabi Cream, served alongside Red Capsicum Mousse & Marinated Vine Cherry Tomatoes ($48).

Incredibly fresh and sweet tasting, the lobsters went well with the smooth and mildly spicy avocado and wasabi cream.

The medley of tomatoes was a thing of beauty as well. The cherry tomatoes practically burst in my mouth with its sweet and tart flavours while the vine tomatoes had a more full-bodied savouriness to them. 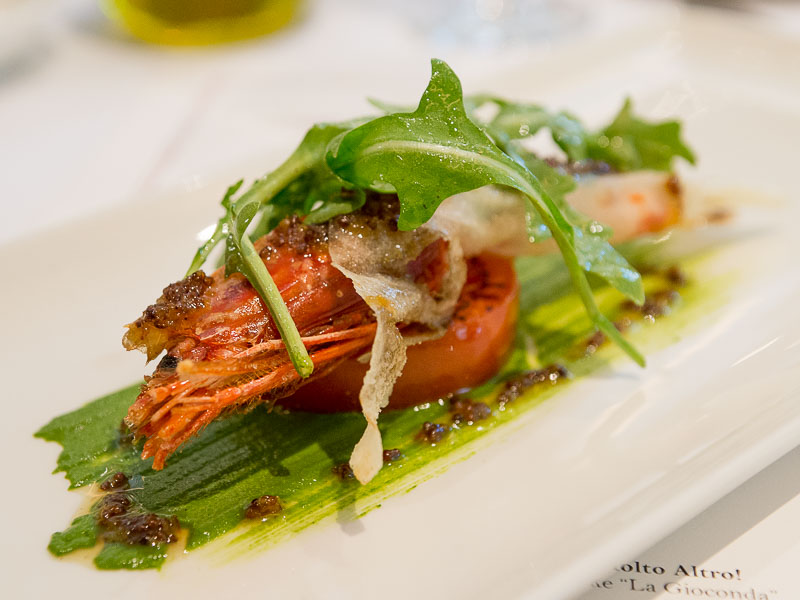 The crispy ‘candy’ layer was a thoughtful play on the crunch from biting through a prawn’s shell. The prawn itself was firm, sweet and well-balanced by the faint bitterness of the arugula pesto. Next up, we were invited to view a demonstration of Chef Roberto making ‘Chittara’ pasta, a type of squarish egg spaghetti. 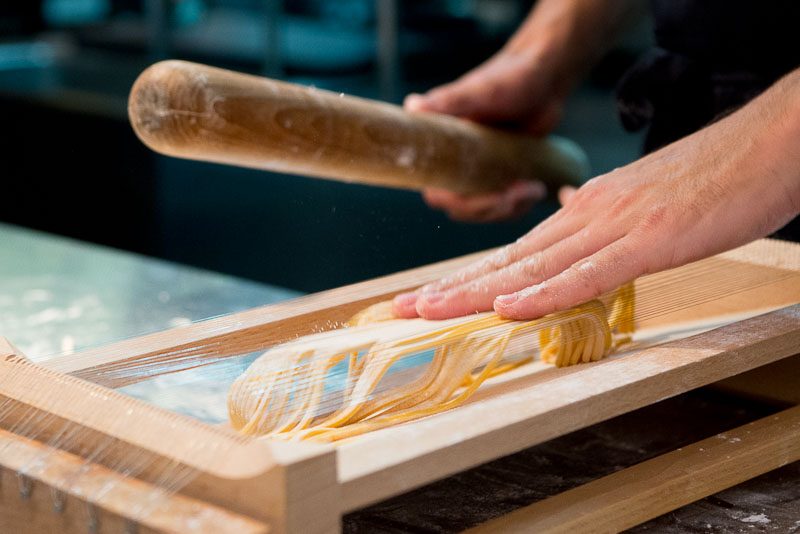 Literally meaning guitar, the flat pasta dough were pressed over wire strings to obtain its shape. 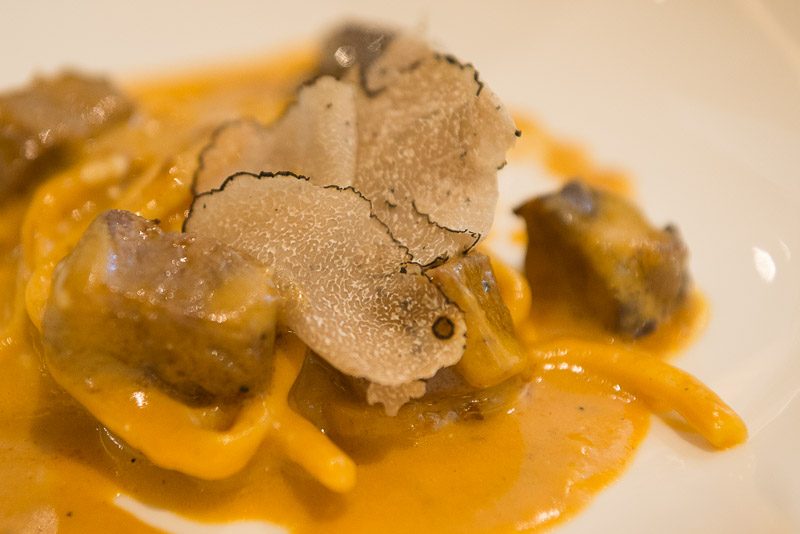 The handmade pasta had a firm bite and was well-coated by the ragout sauce which was further amplified by the heady aroma of the freshly shaved black truffles. The chunks of short ribs had a nice ratio of fat-to-meat, resulting in a fork-tender texture. 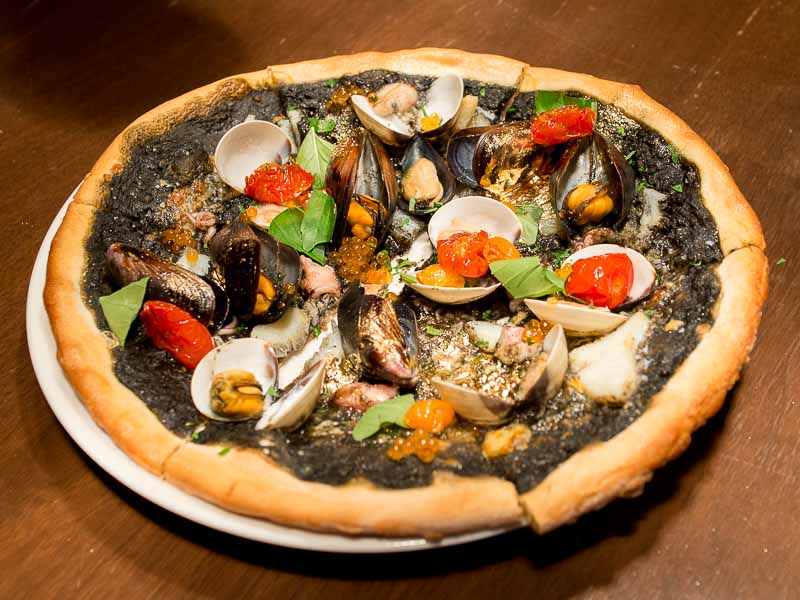 The Pizza Oro Nero ($32), which consisted of a squid ink pizza base topped with seafood, basil and gold flakes immediately drew us in with its vibrant visuals. Prepared in a wood-fired oven, the pizza was truly excellent with a light airy chew in the centre as well as a satisfyingly crunchy crust.

The squid and mussels were incredibly fresh and sweet, while the cured cod was interestingly drier but still somewhat flaky with a strong salty finish. The dollops of trout roe scattered throughout provided bursts of mellowed brininess in each mouthful. However, Chef Roberto saved the best for last with the seasonal Milanese Veal Cutlet ($146, feeds 4 – 6 pax). Due to its huge size and particular shape, he even jokingly referred to it as ‘elephant’s ear’.

Coated with breadstick crumbs made fresh in-house, the cutlet was fried in clarified butter, which resulted in a rich tantalising aroma. We’re not kidding when we say we could smell it all the way from the kitchen. My first bite revealed in what was probably the most audible crunch of my life and made way to reveal a moist and juicy centre. Drizzle some lemon juice over the cutlet to balance out all that sinful richness.

The potatoes were super soft and aromatic as well while the sweet and tangy roasted cherry tomatoes made for a mellower source of acidity. At first, I was puzzled when I was served this and told it was called Rosella’s Strawberry Planet ($16). ‘Where’s the strawberry? It’s all white’, I thought. 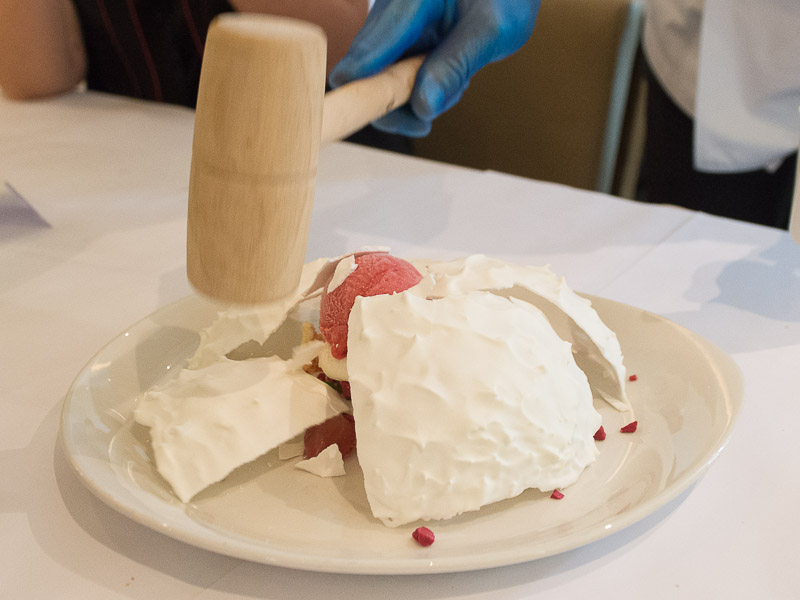 And then I saw that the server had a small wooden mallet in his hand. With a few swings, the meringue ‘planet’ was shattered to reveal its strawberry sorbet core. 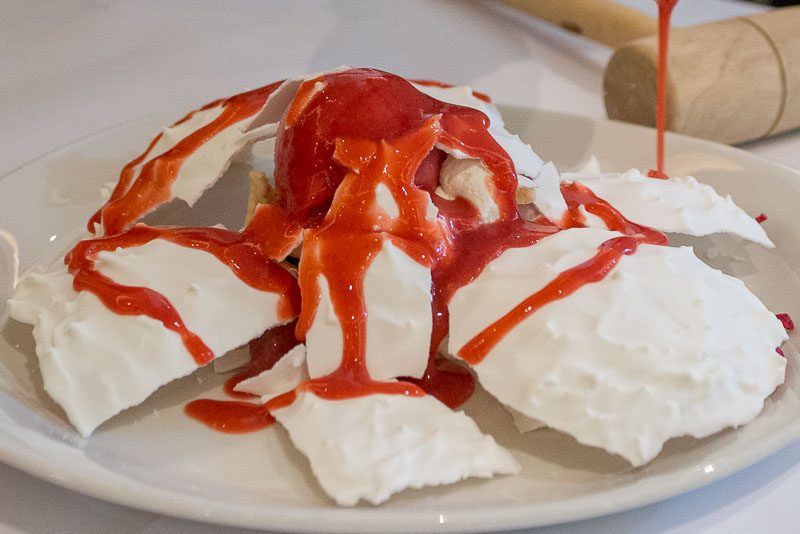 As if that wasn’t enough, it was then drizzled over with strawberry sauce. After watching that hammering, I couldn’t help but take my spoon to further shatter the broken chunks of meringue into tiny pieces myself.

The result was a great contrast between the sweetness of the meringue and the acidity of the strawberry. The light coarseness of the sorbet was highlighted by the tiny bits of meringue mixed into it as well — this made for one of my most interesting dessert experiences yet. 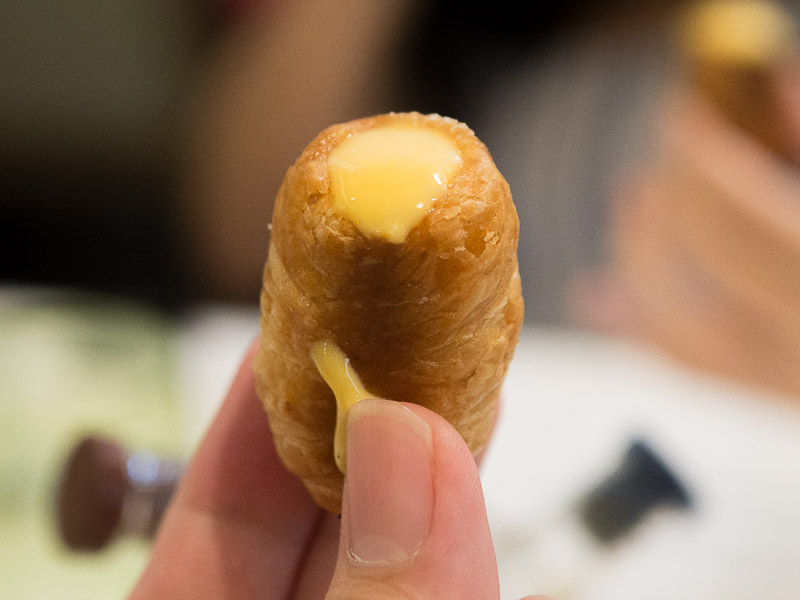 To formally end our meal, we were given some complimentary petit fours such as a cream-filled cannoli, which was rich, crispy and flaky. 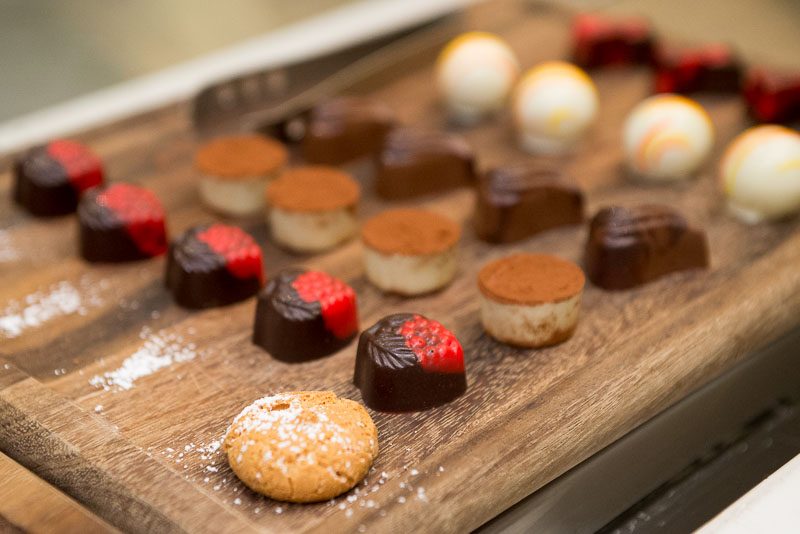 But my favourite one definitely has to be the variety of home-made chocolates that they take out on a wooden board for you to choose. There are ‘safe’ choices such as tiramisu and mocha as well as the bolder pepper chocolate (second from the front).

I leapt at the chance to try the latter and was intrigued by how the earthy heat of the pepper and the rich bitterness of the chocolate managed to complement each other.

Overall, I was blown away by the repertoire of excellent Italian dishes that Fratelli had to offer. I highly recommend keeping this place in mind for special occasions — although one could argue that dining here is already a special occasion in itself.

Previous articleCarnival Of Wines & Spirits (COWS): Stock Up On Alcohol With Up To 50% Discount At Novena From Now Till 30 July ’17
Next articleAfter Dawn BBQ Block Party: Enjoy A Day Of Food, Music, Art & Games At Club Kilo Charcoal Club On 30 July ’17