Conveniently located opposite Clarke Quay MRT (Carpenter Street) is Gake, which has recently opened its door to the public. Gake displays a modern take on an izakaya, showcasing small plates of innovative and intricate creations. Gake is headed by a multi-award winning chef, Angus Chow, who was Chef of the Year at the 18th World Gourmet Summit Awards of Excellence. On top of that, Chef Angus has also worked in a few of the finest restaurants in Singapore such as Les Amis, FOC as well as Boruto.

Gake, in Japanese, translates to ‘cliff’ which describes Chef Angus’ exhilarating personal experience as well as the food he dishes out that put customers on the edge of their seats. 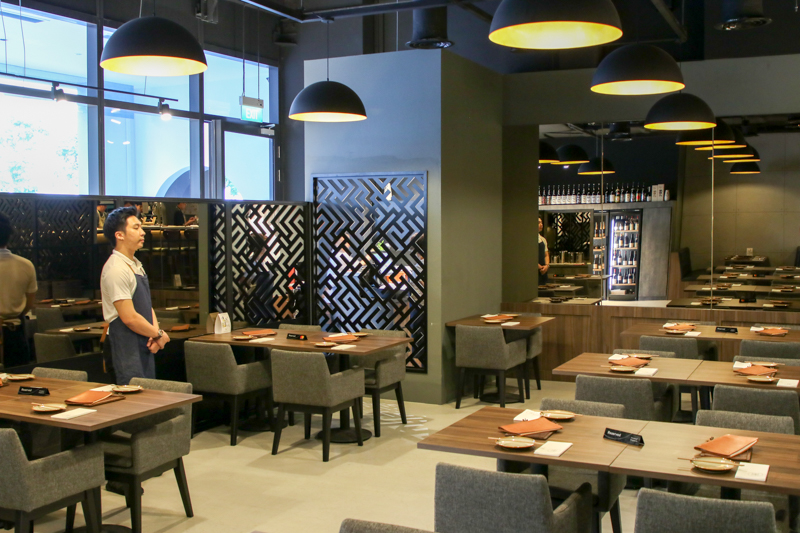 The restaurant setting features an up-to-date minimalistic grey interior with an interactive dining area on the sushi counter. 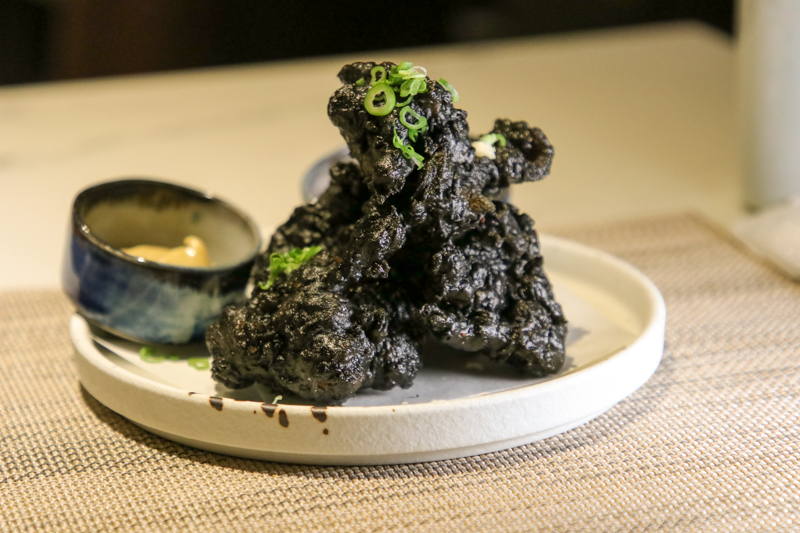 Following the minimalistic decor was the Black Charcoal Karaage (S$15.80) we had. The chicken had been coated in an airy tempura batter and was extremely tender and juicy. On top of that, the chicken had a perfect fat-to-lean meat ratio and I could even see the juice oozing out. The mayonnaise and tobiko dipping is another simple dipping sauce they provide. While the tobiko added a crunchy texture in my mouth, the creaminess of the mayonnaise helped to round off the flavours of the chicken. 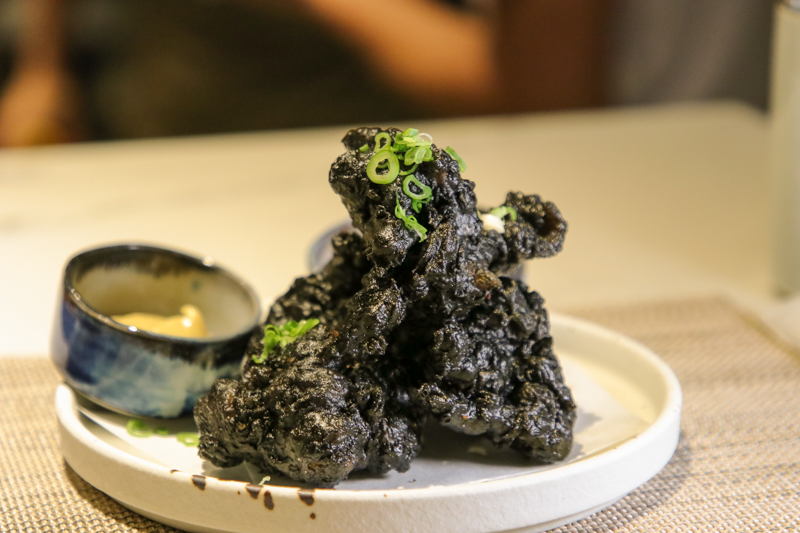 However, I felt that the batter of the chicken was a little bit too oily and after a while, I felt the greasiness at the back of my throat. I believe that this dish would work hand-in-hand with a glass of sake to help wash down the oiliness. Moving on, we tried another one of their signatures, the Tori Uisuki No “Kopa” Yaki (S$28.80). It was a half-chicken that has been oven-grilled and was doused with flaming whiskey tableside. 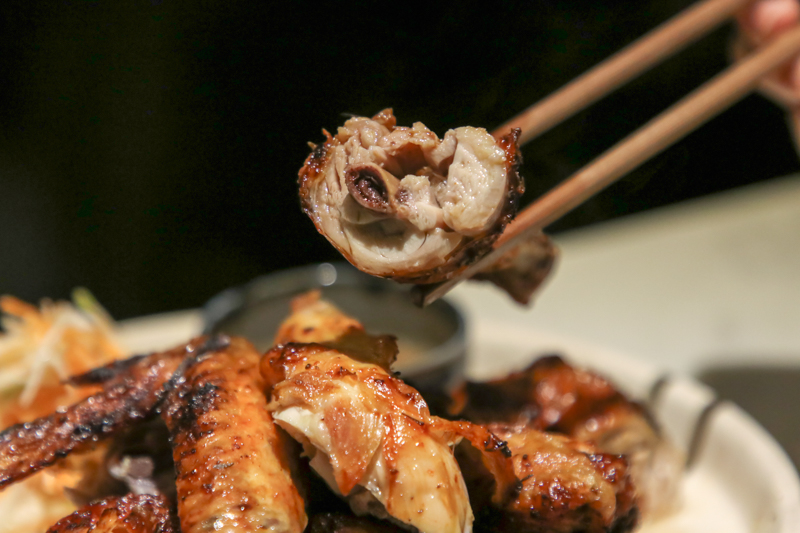 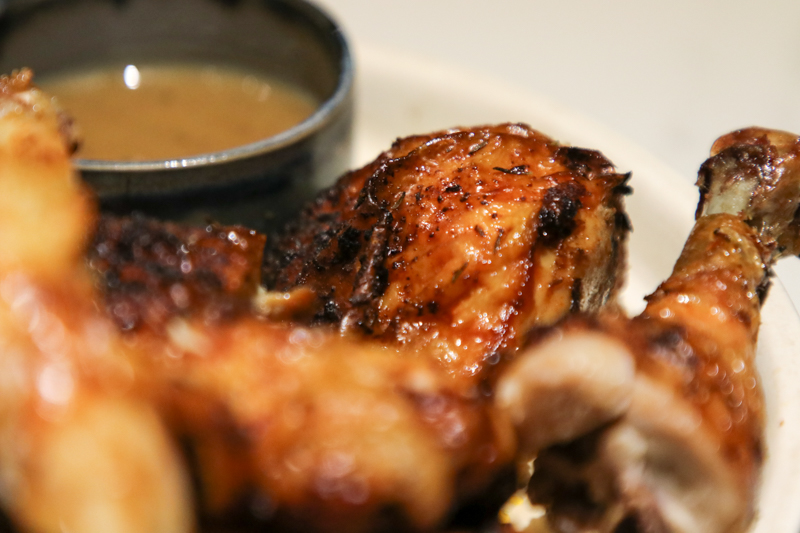 The skin of the chicken had a slight char on the outside with some burnt ends that also added a crunchy texture. The flaming whiskey that had been poured over the chicken gave it a subtle smoky flavour. I could also taste the woodiness from the oaks that the whiskey had been aged in.

With so many different dimensions of flavour, Gake had made a simple dish perfect. This had to be the best oven-baked chicken I’d had. 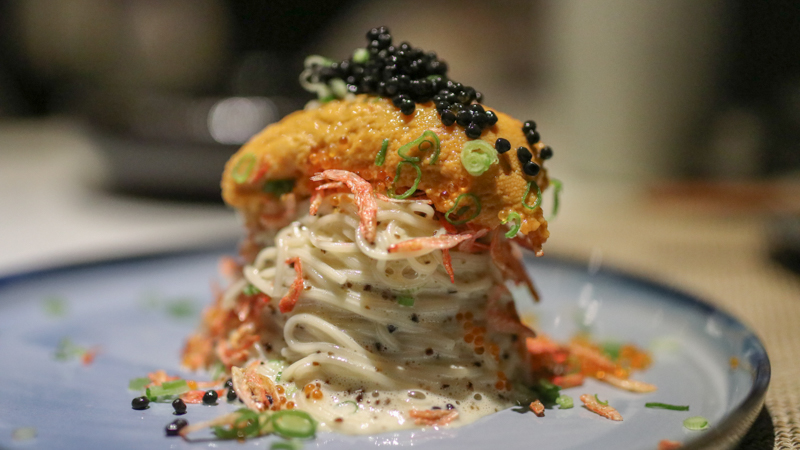 Besides chicken, we tried Chef Angus’ own creation, the Truffled Hiyashi Somen With Uni And Caviar (S$35.80). 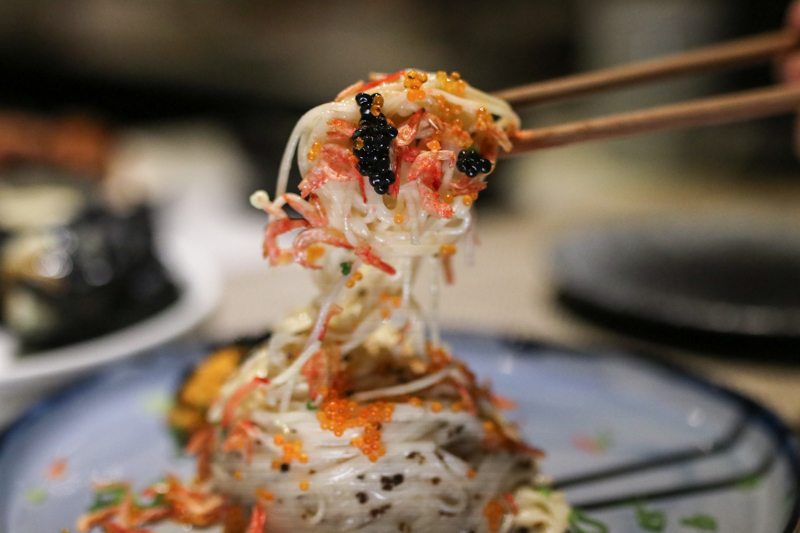 This is Chef Angus’s own take on a truffle capellini with bits of Sakura prawns tossed together with truffle oil and pasta. I really liked the addition of Sakura prawns as they were like mini crunchy bits of sweetness that added a contrasting texture to the pasta. On top of that, Chef Angus also uses New Zealand uni (sea urchin gonad) which is under the categorised under premium baffoon uni. As a result, the uni had a vibrant yellow colour and a very creamy texture.

The uni also had a rich and savoury taste that supplemented the pasta by providing it with a natural saltiness from the sea.

We also tried the 8-Course Omakase Set (S$98++) that was launched in March 2019. The set features a fusion of Asian cuisine taking inspiration from Singapore food. One such example which I thoroughly enjoyed was the Hokkaido Scallop With Laksa & Beni Shoga. Luscious scallops pan seared evenly on both sides before serving it with laksa foam, pickled ginger and drizzled with prawn oil. 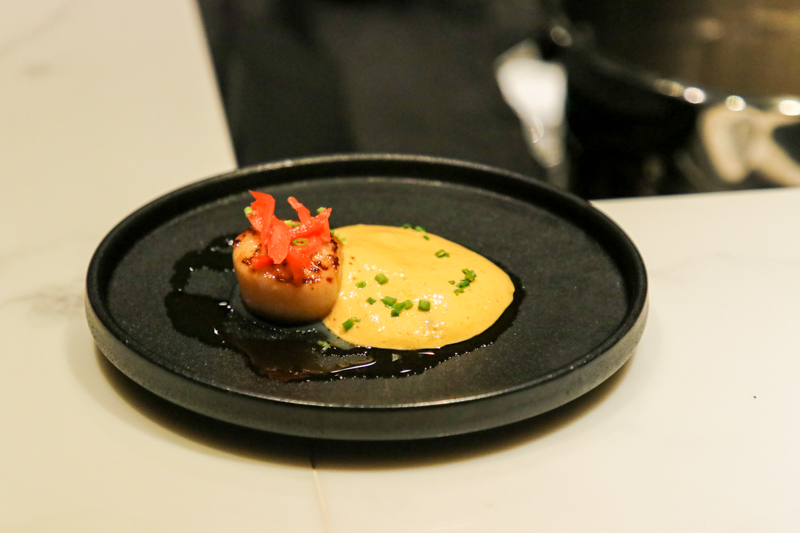 The laksa foam captured the coconut-ty flavours of laksa as well as a slight tingle from the spiciness.

The fragrant aroma of the prawn oil added another layer of complexity to the dish. This dish captured the essence of a traditional bowl of laksa and the similarities between them are truly astounding.

Overall, there were some hits and misses but generally, I would still come back to Gake. Nothing really stood out for me from the a la carte menu, but with that said, the flavours right down to the preparation of the dishes were perfect.

If you are planning to come to Gake, or you are near the area, I would recommend going for the omakase set menu instead. Although it is not a traditional omakase where the chef chooses what he wants to cook for you, the little Singaporean twist that Chef Angus adds to his omakase sets itself apart from the rest.

Previous articleHave A Break, Have A Kopitiam Breakfast-Flavoured Kit Kat From 8 – 14 Apr At Vivo
Next articleBrown Sugar Milk Tea Ice Cream Is Now A Thing & Available In Taiwan