Golden Peony CNY 2016: Put Your Money Where the Monkey Is

Welcome the monkey year with a Yu Sheng so apefully apt for our reunion dinner. This year, Conrad has invited the media over for a taste of their Chinese New Year 2016 set menu. The dishes I’ve tried are selected dishes from both the Imperial Menu ($3888++ for 10pax) or other Set Menus.

First off, I have never seen Yu Sheng shaped like an animal before so I was incredibly (but pleasantly) surprised to be greeted by a huge monkey made of vegetables.

From this art-piece of a Yu Sheng, one can see that the chefs here at Golden Peony really embody the fact that culinary truly is an art.

I did not expect anyone to be sculpting monkeys from shredded cucumbers, carrots etc and then using raspberries and blueberries to accentuate the monkey’s facial features. Like whoa is there a class for this? 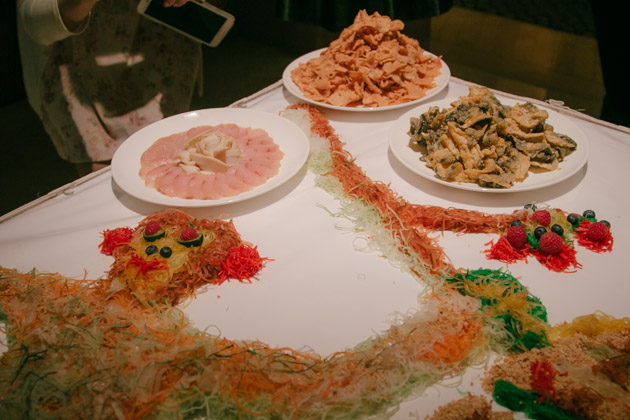 Aesthetics aside, the thing I worry about when I have Yu Sheng is the overtly saccharine and artificial taste from the sauces and preserved vegetables. Thankfully, because of its freshness, it was light and appetising while the plum sauce was evident but not overwhelmingly sweet.

Rest assured that the raw fish they use are of top quality that they have been licensed to sell. They do not include salmon to completely avoid the problematic strain of bacteria, that has been the recent cause for distress.

Fun fact, the crispy fish skin was dipped in salted egg before deep fried so it has a very subtle salted egg taste. I would have preferred a stronger taste of salted eggs though because the barely-there flavour was masked easily.

This table long monkey is for up to 30-40 pax and can be prepared upon request but of course at additional charge ($888+ Ala Carte). A smaller version of this yusheng would be a monkey head one (as odd a that seems). 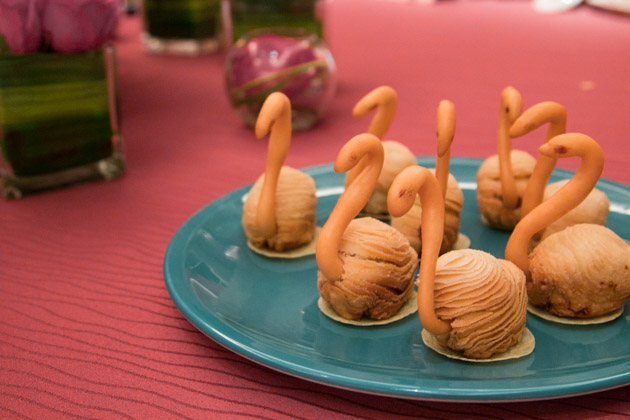 Next we had esteemed Chef Ka Keung’s creation, the Crispy Filo Swans filled with Foie Gras, Truffle and Minced Chicken ($9.80++ per swan) presented on a blue plate like a herd of swans gracefully swimming in a lake. But the devouring of the pastry, was nothing graceful. 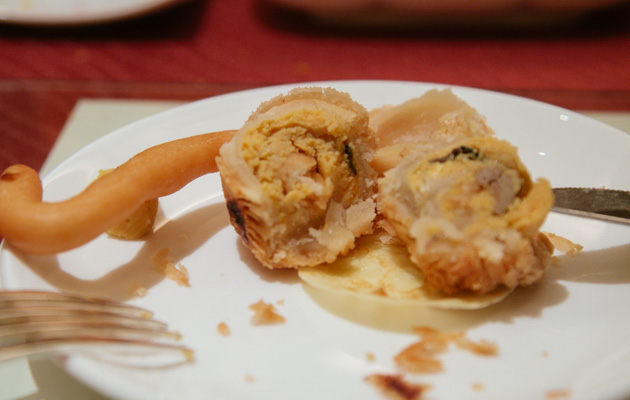 The pastry was extremely fragile and crisp, crumbling at the slightest of touch. The yolk looking ingredient is actually minced meat, minced probably over 1000 times to achieve that boiled egg yolk consistency.

A generous slice of truffle was inserted inside the layer of minced meat. The foie gras in the centre was less sticky lotus paste kind of consistency but still creamy when in your mouth. Personally not a fan of the insides of this dish because it felt like they didn’t go well together for it was all seemingly a load of salted creamy stuff, tasting a tad gamey as well.

However, many people around the table were voicing their satisfaction and adoration about this dish. So, to each his own!

Absolutely loved the swan neck and head though (LOL) because it was basically mantou – that fragrant airy bread we dip into our chili crab. 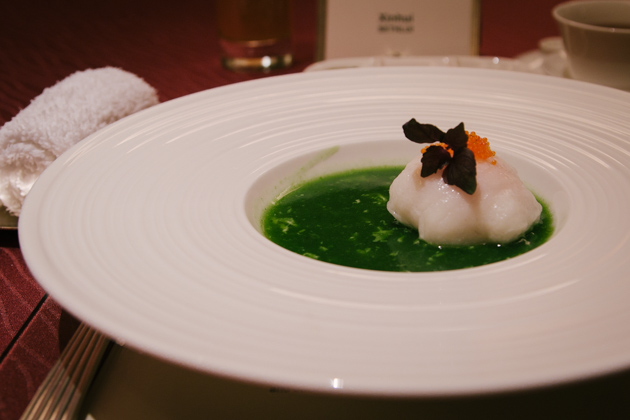 This looked gorgeous like a silky plump pouch lying in a pool of liquid jade. The seafood was absolutely fresh so they obviously tasted fantastic and had none of those off-putting fishy odour. The silky Perch filet was cooked just right, at the perfect degree of doneness.

Topped with the fish roe, you can feel unique additional crunch and burst of juices in your mouth. The roe served as an interesting portal to japan and back in nanoseconds.

Then, there laid a piece of melon at the bottom of the everything, soft and nice to bite but otherwise serving no other conceivable use than to prop the fish higher since it contributed neither to the taste nor the décor of the dish.

The spinach puree luckily had no intensely green or raw flavour to it. It was easy to drink and kinda tasted a bit like shark fin broth but could really do with more flavour. The puree-broth was highly overshadowed by the seafood because once you’ve tasted the latter, you can barely taste the puree. Meet deconstructed Peng Cai-Braised Abalone with ‘Monkey Head’ mushroom, Fish Maw and Black Moss ($18.00++ per person). The monkey head mushroom reeeeeally resembled a monkey’s head and was a tad freaky to cut into it but thankfully, it was just a fungus everyone no need to fear (puts flashbacks of monkey brain video away).

The mushroom was fat and juicy, with interesting textures inside. Around the top 1/10 of it had the feeling of rough tight fibrous strands then below that area was smooth chewy mushroom/abalone like consistency.

The South African abalone was huuuuge as well yet has been done excellently, maintaining its juiciness and chewiness. Both the greens and mosses felt great to slurp with the rich starchy sauce. The fish maw looked just like a piece of Shark Fin and I momentarily horrified until rationality kicked in or maybe because I overheard someone clarifying that it wasn’t.

This top quality stuff didn’t shrivel up ugly like the ones I’ve seen at home, instead, it rolled up like a goddamn fur carpet – oh the quality discrimination. It was silky, a little bit tough yet melts in your mouth. 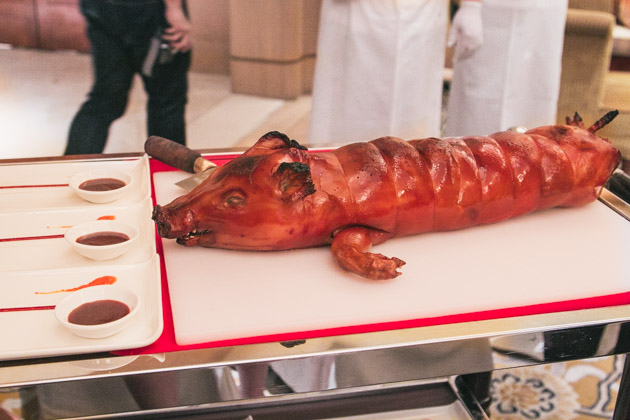 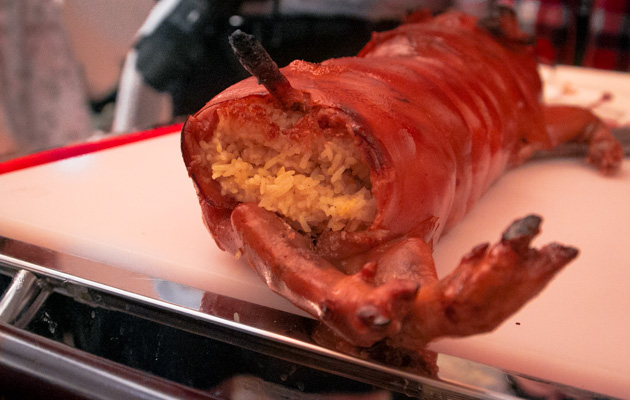 Ah the highly anticipated Roasted Suckling stuffed with Hainanese Chicken rice ($338.00+). This special dish comes with a live demonstration of the chef butchering the pig. With every swift slice of the blade, you hear the satisfying crackling and crunch of the crisp skin. Mouth-watering ain’t it?

The suckling pig’s skin was so fragrant and crisp, bite or break it, and it’s bound to crackle. The satisfying crackles and melt-in-your mouth sensation are signs of a well roasted skin. 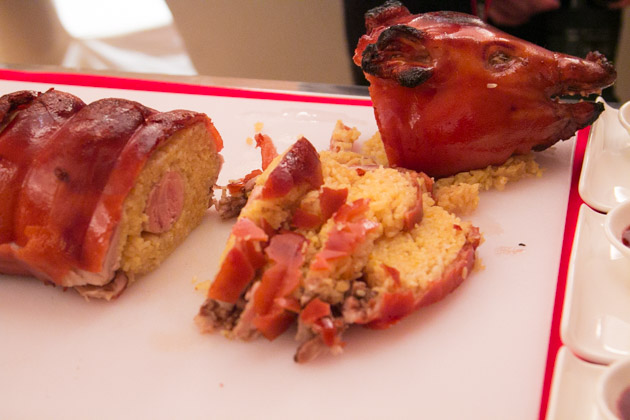 The rice was not purely chicken rice for the chef combined it with glutinous grains as well to jazz up the texture, taste and reduce oiliness. So the rice was pleasantly different with 2 subtle yet distinct aromas. And of course how could we forget about the chicken. Chicken thigh meat is rolled in a cylindrical shape then stuffed into the rice. It was tender and juicy just what we want of our chicken, no? The multiple smears of complementary sauces on our plates, like the roast pork sauce and chicken rice chili, simply pulled the entire dish together, giving the rice a more tasteful finish. Our dessert was presented beautifully with dry ice effects and flower petals strewn around a matte black plate. The lemongrass drink looked like it would be really light and refreshing but instead was very sweet, with overly intense taste of sourplum. It would’ve been nicer if the dessert was lighter.

The 3-in-1 was great. Nian Gao and Sweet Potato gave it adequate sweetness and stickiness while the Yam contributed a bit of rawness and crunch. Definitely better than most 3-in-1’s you find outside.

To sum it all up, Golden Peony’s Chinese New Year menu was unique – their innovative food fusions and tasteful aesthetics – but could work on the taste of certain dishes. Top quality food is of course a given and is consistently palpable. Bold presentations but conservative tastes.

I personally really enjoyed the Suckling Pig stuffed with Hainanese Chicken Rice and have considered buying it for my family so even if you don’t want to splurge on this entire set menu, you can still purchase a few of their dishes that are available for takeaway.

The Roasted Suckling Pig with, or without Hainanese Chicken rice stuffing , priced at $338.00 and $238.00 respectively for take away. With a purchase of a Roast Suckling Pig (of either variety) you can enjoy a complimentary Fortune Salmon Yu Sheng worth S$68+. Other takeaway options also include Pen Cai, Roasted Duck, Braised ‘Dong Po’ Pork Belly etc. Simply visit their website for comprehensive details on their Chinese New Year set menus and takeaway dishes.