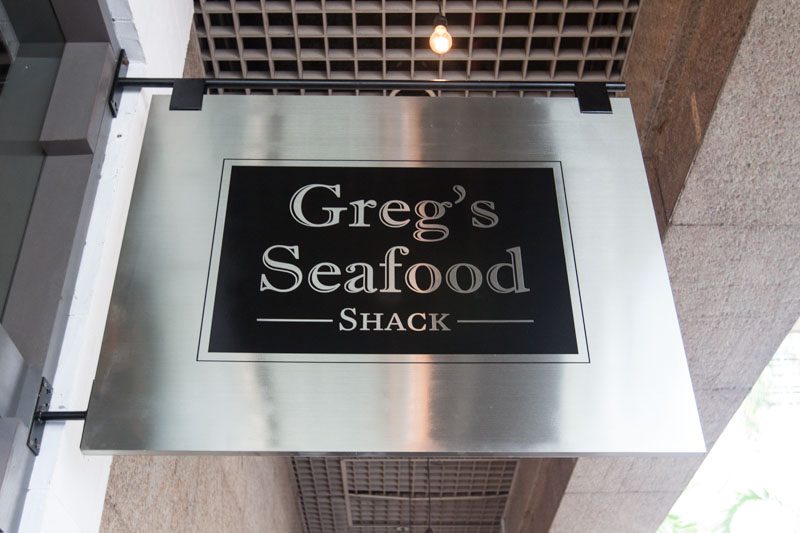 Named after the old Saint Gregory Street where it sits now, Greg’s Seafood Shack is a newly opened restaurant by Grand Park City Hall that has taken over the former East 8.

Located along an airy courtyard of the hotel, it offers a bevy selection of seafood dishes tossed in a variety of Asian styles.

If you are looking for a place to hang out or to chill with drinks after work, and are crazy about what the ocean has to offer, Greg’s Seafood Shack is right up your alley. Set to charm you with their drinks, Greg’s Seafood Shack has more than 20 types of beers displayed proudly on its shelf (provided by Beer Tavern). 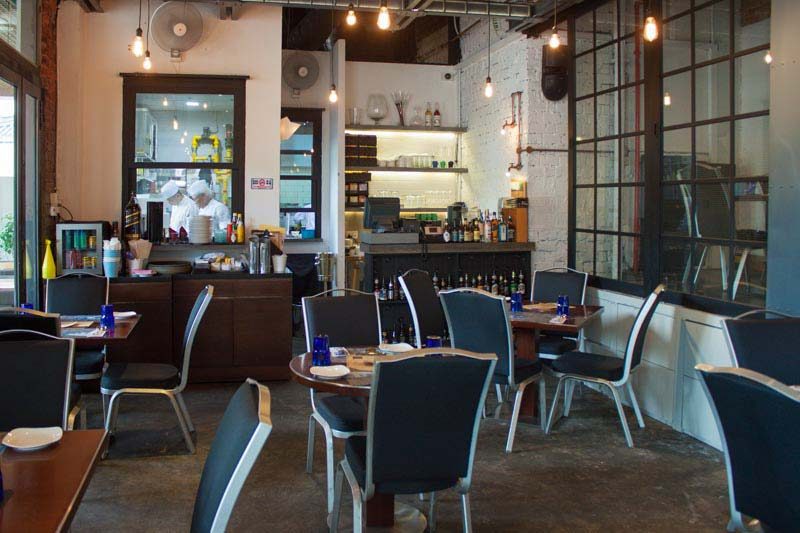 Furnished in a casual dining and raw industrial style, the restaurant sits up to 50 pax both indoors and outdoors for all to ease right into for a jolly time of unwinding.

It even features a new BEER PONG table on top of dart boards, foosball tables, and a billiard table to add more fun to the already “Happy Hour”.

Here are some dishes to drool over from the restaurant’s menu: Salmon Confit Taco ($10). Tease your taste buds with a trio of Salmon Confit Taco – wonderful layers of crunchy textures from the taco, followed by a bed of kimchi and mayonnaise, topped with fresh salmon sashimi and trout roe.

I recommend getting these for starters, maybe with a beer or two, because it sure will whet your appetite. 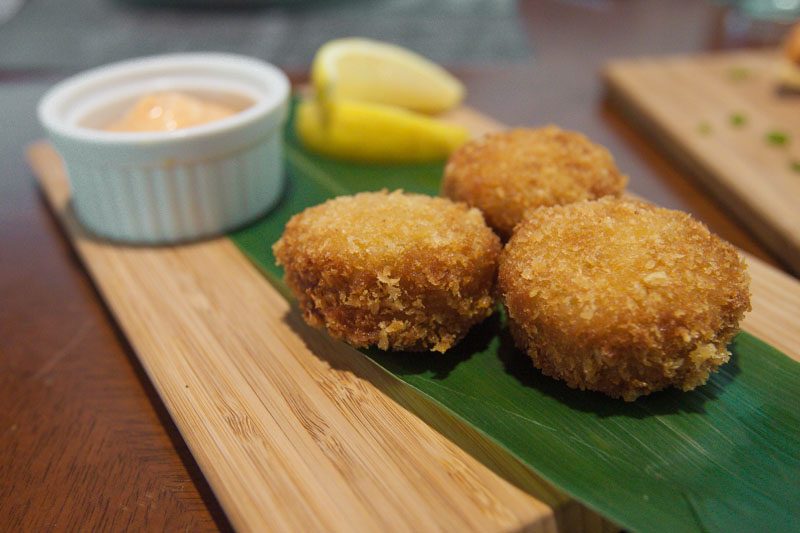 Crab Cake with Spicy Aioli ($18). Sink your teeth into the crispy breaded crust to uncover a generous portion of moist shredded crab meat.

Paired with spicy aioli dip, the crab cake is a great finger food to get the pints of beer rolling. The spicy aioli dip could have been a little spicier though. The freshness of the scallops and bursts of flavour from the salmon roe give the dish a subtle hint of sweetness. Altogether, it is a tad light on the palate, which I feel would go really well with some sake. 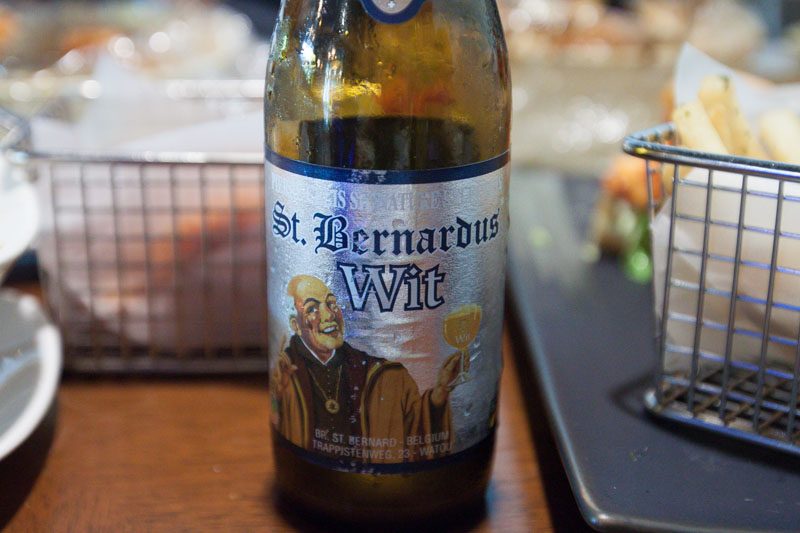 If you’re looking for a beer to complement these light bites, go for the St. Bernardus Witbier ($14), which tastes almost like Hoegaarden but fruitier and lighter. 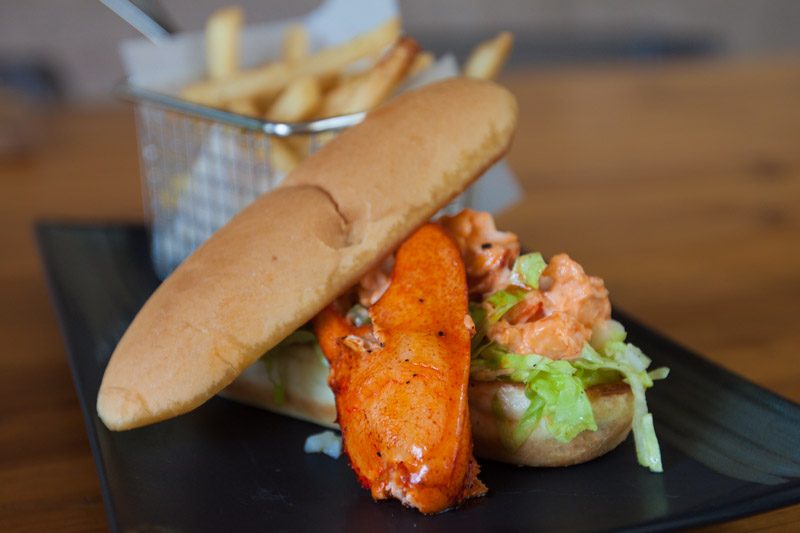 Maine Lobster Roll ($40). Bits of lobster meat is mixed in mayonnaise and sandwiched between two fragrant buttered buns, then served with an aromatic side of truffle fries and salad in vinaigrette dressing.

However, the dish was a little underwhelming with the pincers being slightly overcooked. The portion of lobster meat in the buns could have been more generous considering its price too. 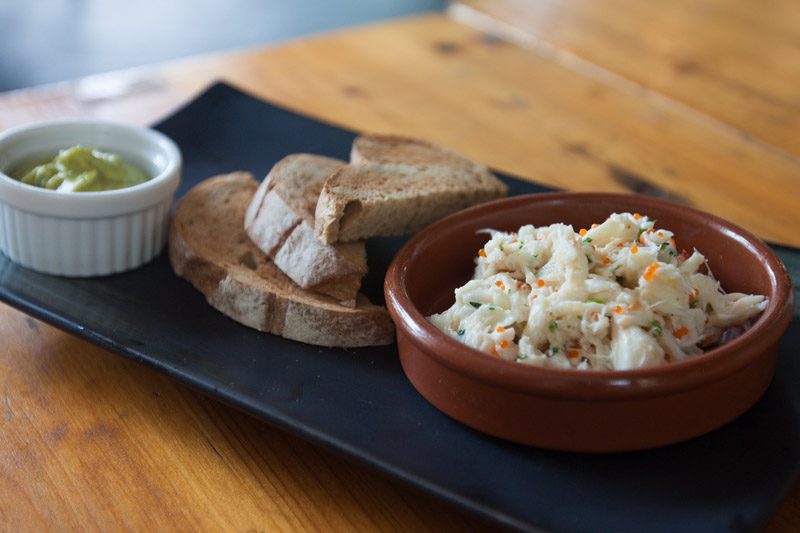 Again, nothing too fancy that would knock you off your feet, but an interesting twist to this breakfast food staple. It does great with beer too.

Greg’s Seafood Shack prides themselves in providing us extremely value-for-money broils with a wide range of crustaceans and shellfish, including tiger prawns, little neck clams, blue lipped mussels, snow crab legs, and slipper lobsters all in just one broil.

The sauces are cooked separately and added in after stir-frying the ingredients, then left in the oven to bake for 10 to 15 minutes, allowing the flavours from both the sauce and ingredients to set in.

For more variety, you could also top up your broil with a whole Sri Lankan Mud Crab at an additional $18, or a Maine Lobster for $40. 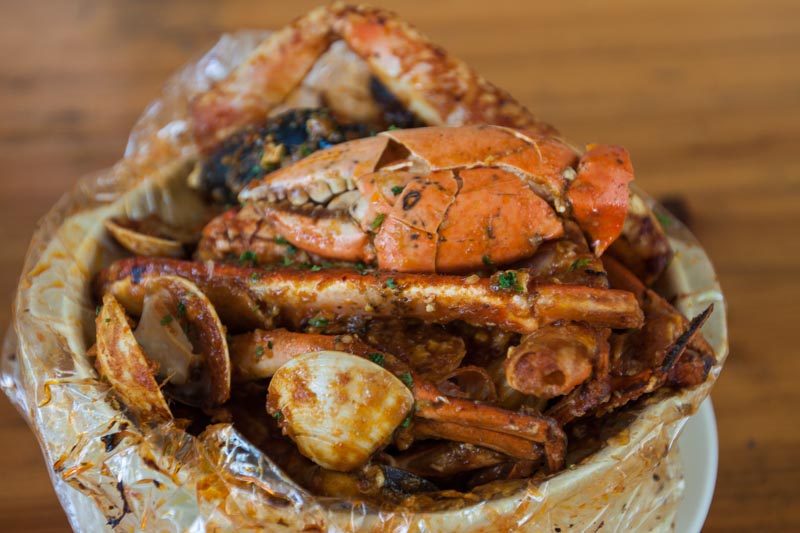 Singapore Chilli Sauce Broil (500g-$28/1kg-$52), with an additional Whole Sri Lankan Mud Crab (+$18). A personal favourite, this dish was a wonderful myriad of savoury and sweet flavours from the tomato and chilli sauce, with a lovely tinge of floral spice.

The slight bits of garlic along with the broil’s rich flavours permeate your mouth when you chow down on the seafood coated in viscous sauce, making it absolutely finger-licking good. 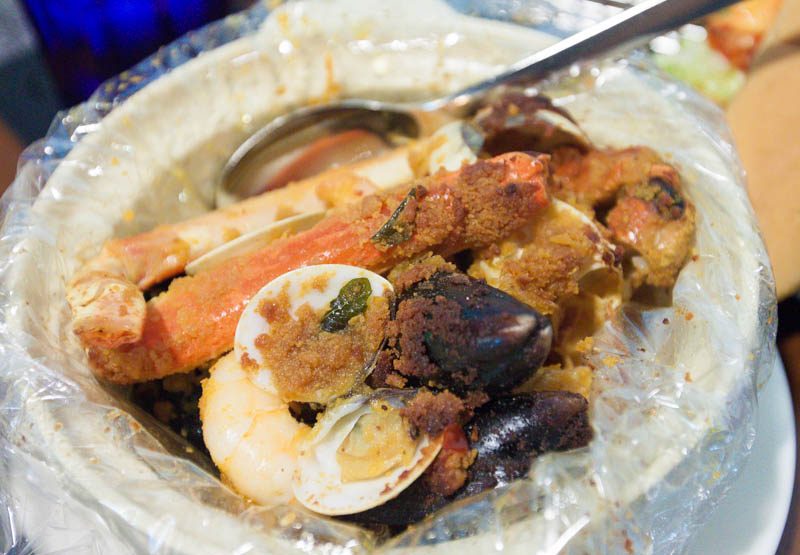 Broil Wok-Fried with Salted Egg (500g-$28/1kg-$52). Using the same methods of cooking all throughout the different broil flavours, the salted egg broil was slightly drier than the rest. Although its salted egg yolk flavours were potent, I would have preferred it if it were creamier and slightly less salty.

We also really enjoyed the Bouillabaisse Broil, made with delicious tomatoey fish broth, good for those who prefer something more easy for the stomach. Their Spicy Kimchi Clam Broth Broil was a different concept as I’ve never come across broils with a taste of Korea. Although it was great as it is, we felt it would have been phenomenal if the base was cooked to become more of a stew rather than thick gravy. If you’re looking for beers to pair with your broils, opt for the Royal Jamaican Alcoholic Ginger Beer ($14) for an in-your-face punch of gingery heat – it’s a great palate cleanser to help balance out the saltiness from the seafood boils.

Their desserts are so elegantly gorgeous that I feel they deserve a stand-alone featured post of their own. Sharing the same pastry chef as Indulge at Park at Grand Park City Hall, both restaurants serve identically sweet delights. Flower Pot ($18). Beautifully arranged in a chocolate bowl, the Flower Pot consists of light Mascarpone covered in crumbs and chocolate bits to create the illusion of soil, then topped with mixed berries, handmade berry marshmallow and edible flowers, served with sponge and Raspberry Sorbet on the side.

It truly is a visual and appetising treat that’ll definitely be a hit with the ladies. 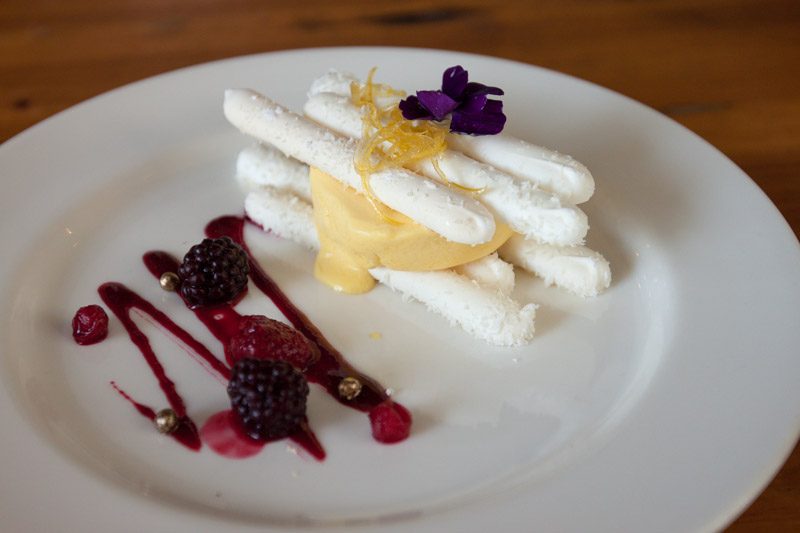 The berry compote harmoniously ties in the all sweet and sour flavour components of the dessert together. 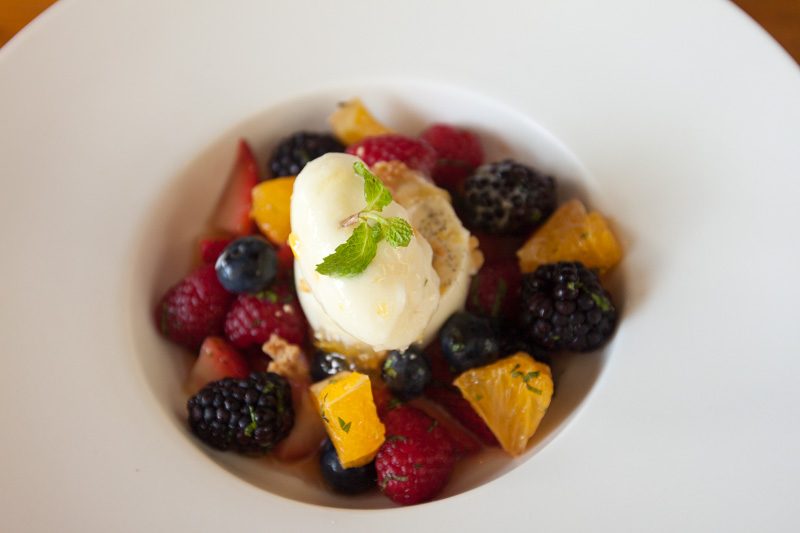 Citrus Collection ($18). Just like its name, the bowl is filled in an assortment of berries and oranges that have been infused with Grand Marnier.

Accompanied by a blob of homemade vanilla pudding, lemon butter crumble and Yuzu sorbet, this zesty creamy delight helped wash down the heavy meal we had prior to desserts. 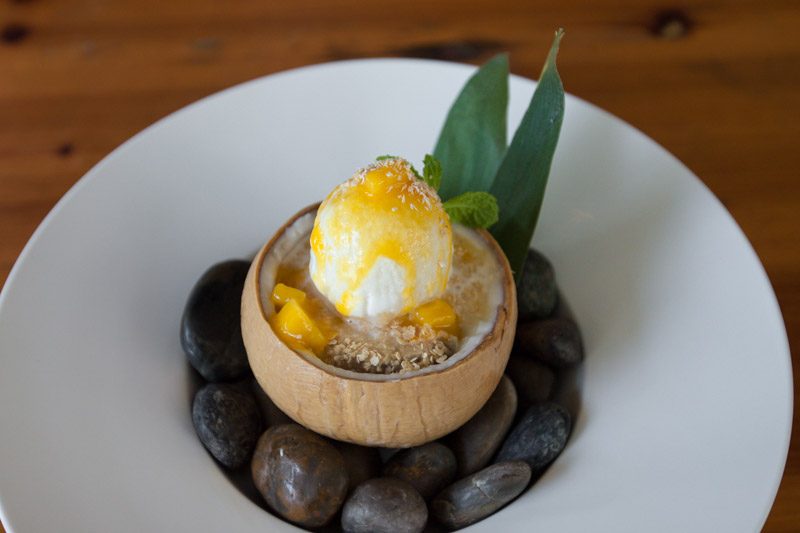 Taste of Coconut ($14). A clever dessert that makes use of the entire coconut — The jelly in the husk is made with coconut juice and has large grates of coconut flesh in it.

On top, the coconut sorbet garnished with toasted coconut, then drizzled with mango compote, make it a tropically refreshing dessert. 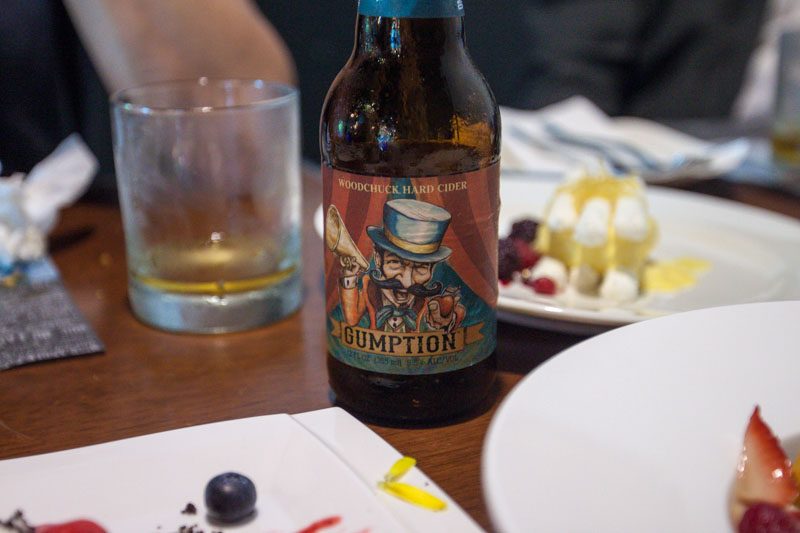 Grab a bottle of Woodchuck Gumption Cider ($12) to end the meal on a sweet note. Unlike most ciders that are plain sugary, Gumption is slightly more acidic and has a stronger flavour of fermented apples, adding more body to your desserts.

Greg’s Seafood Shack may be part of Grand Park City Hall, but it seems to have taken on a fun, young vibe that would draw in both office workers from the CBD areas, as well as the younger crowd from nearby SMU. Besides its tasty broils and cold craft beers, who would be able to pass up a game of beer pong? Bacchanalia: Wine & Dine In The Heart Of A Restaurant’s Kitchen