I spotted the snaking queue at Guan Kee Fried Kway Teow before I even recognised the stall itself—that’s how popular this hawker stall is.

Located at Ghim Moh Market & Food Centre, this famous and well-loved stall has been dishing out wok hei-filled char kway teow since 1969. Its skills and popularity were recognised in 2019 when it was awarded the Michelin Bib Gourmand—certainly no mean feat for a hawker stall nowadays! 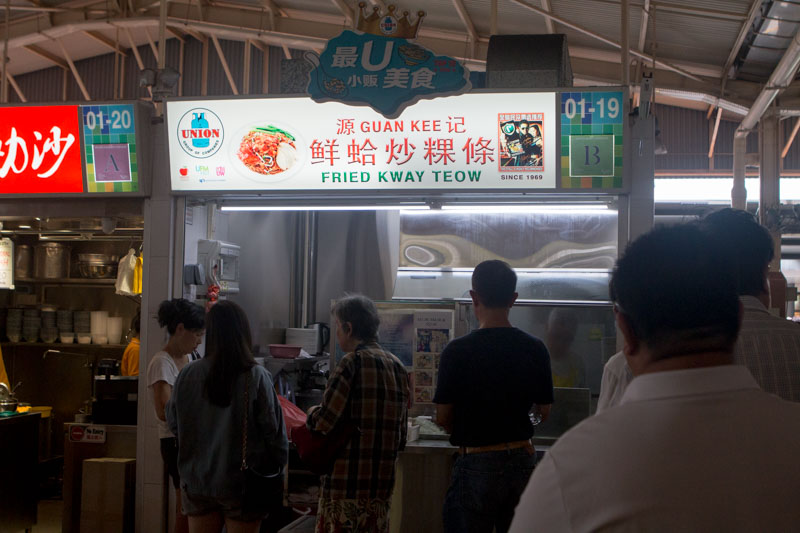 There’s only one uncle behind the wok and he fries the kway teow at his own pace, so expect to wait an average of 30 to 45 minutes for your plate of char kway teow.

Plus, the stall is only open for three out of seven days a week—Tuesday, Wednesday, and Saturday and only from 7.30pm to 2.30pm, so your window of opportunity to get this famed plate of char kway teow is incredibly small.

When I started queuing around lunchtime, I saw about 10 to 12 people queuing in front of me. It took me 35 minutes to place my order, and when I turned to check out the queue behind me, it’s like it never stopped growing. While you’re waiting for your char kway teow, you can check out the uncle’s wok skills by peeking through the glass panel.

Though the glass was covered with a fine sheen of oil (probably from all that frying), I could still see the experienced uncle whipping up plate after plate of char kway teow. What impressed me most was that he cooks everything one plate at a time, rather than cook huge batches and separate them out into individual serving portions.

Even though that means you’d need to wait longer, you can also be assured that your plate of char kway teow is piping hot and fresh from the wok. It came decently-sized, with plenty of colourful ingredients such as beansprouts, vegetables, mussels, lap cheong, large cubes of lard, slices of fishcake, and more.

I loved that the dark soy sauce wasn’t too overpowering, so Guan Kee’s char kway teow was actually more on the lighter side, packed with sweet and fresh flavours.

Every spoonful of char kway teow had something different in terms of texture or flavour—there was that crunchiness from the vegetables and beansprouts, the saltiness from the lap cheong, the springiness from the fishcake slices, the burst of briny flavours from the cockles, and of course, the smokiness from the noodles itself.

Most char kway teows I’ve had were doused generously with dark soy sauce, so Guan Kee’s rendition of this local classic was refreshingly different because it had a good balance of flavours—not too salty and not too sweet. It’s also one of the few char kway stalls that uses a mixture of kway teow noodles and thick yellow noodles. 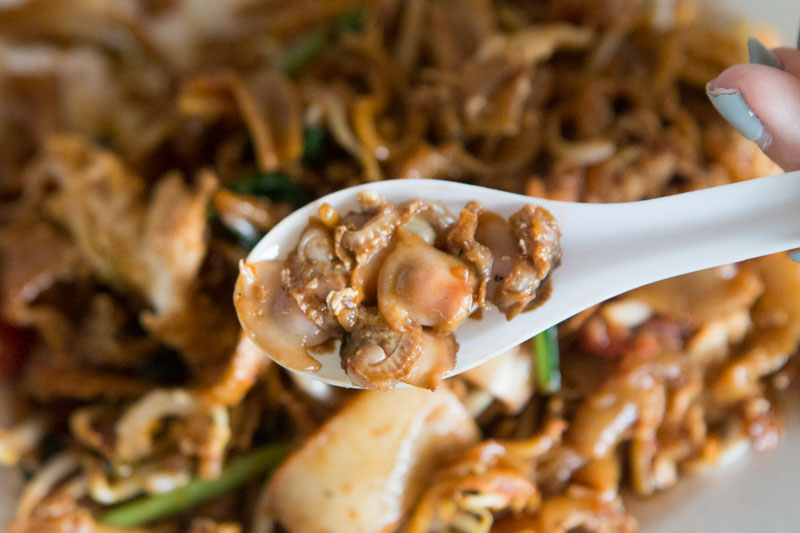 Most char kway teow stalls only give a handful and most of the time, the cockles are really small. Sometimes, I can’t even find them in the mess of kway teow, lard, and other ingredients.

However, when it came to Guan Kee’s char kway teow, I was surprised to find six to seven pieces of large, plump cockles whilst digging through my plate of noodles.

It went perfectly well with the cube-shaped lard pieces, which were delightfully oily, indulgent, and crispy.

It’s easy to get sick of eating char kway teow since the texture and taste is all the same for most stalls, but I didn’t get sick of Guan Kee Fried Kway Teow at all because of the wide variety of ingredients and noodles.

What I loved most about this plate was that it wasn’t overly salty. In fact, those who have stronger palates might even say there’s not enough salt or dark soy sauce in this dish, but to me, it was just right. And needless to say, I polished off my entire plate easily.

10 local microbreweries for an authentic sip of Singapore