I have never been a fan of innards, as I always had the impression that they tasted foul or overpowering. But after growing older I’ve been making an effort in changing my perception of such foods that most people steer away from. It has to exist for a reason and I’ve heard people singing praises for Guan Kee Kway Chap. Located in Toa Payoh, it is no wonder that it is situated in that area as it is home to many of the best hawker stalls in Singapore.

Guan Kee Kway Chap is situated at Toa Payoh Lorong 8 Market and Food Centre, ruling its space for nearly 40 years. Rumoured to be insanely popular amongst kway chap lovers, I dropped by on several occasions to try out my luck. To my sad dismay, they sold out pretty quickly upon my first visit.

Luckily, the kiasu Singaporean in me had to try again on another day as I arrived exactly when they opened and I got a glorious bowl on my second try! 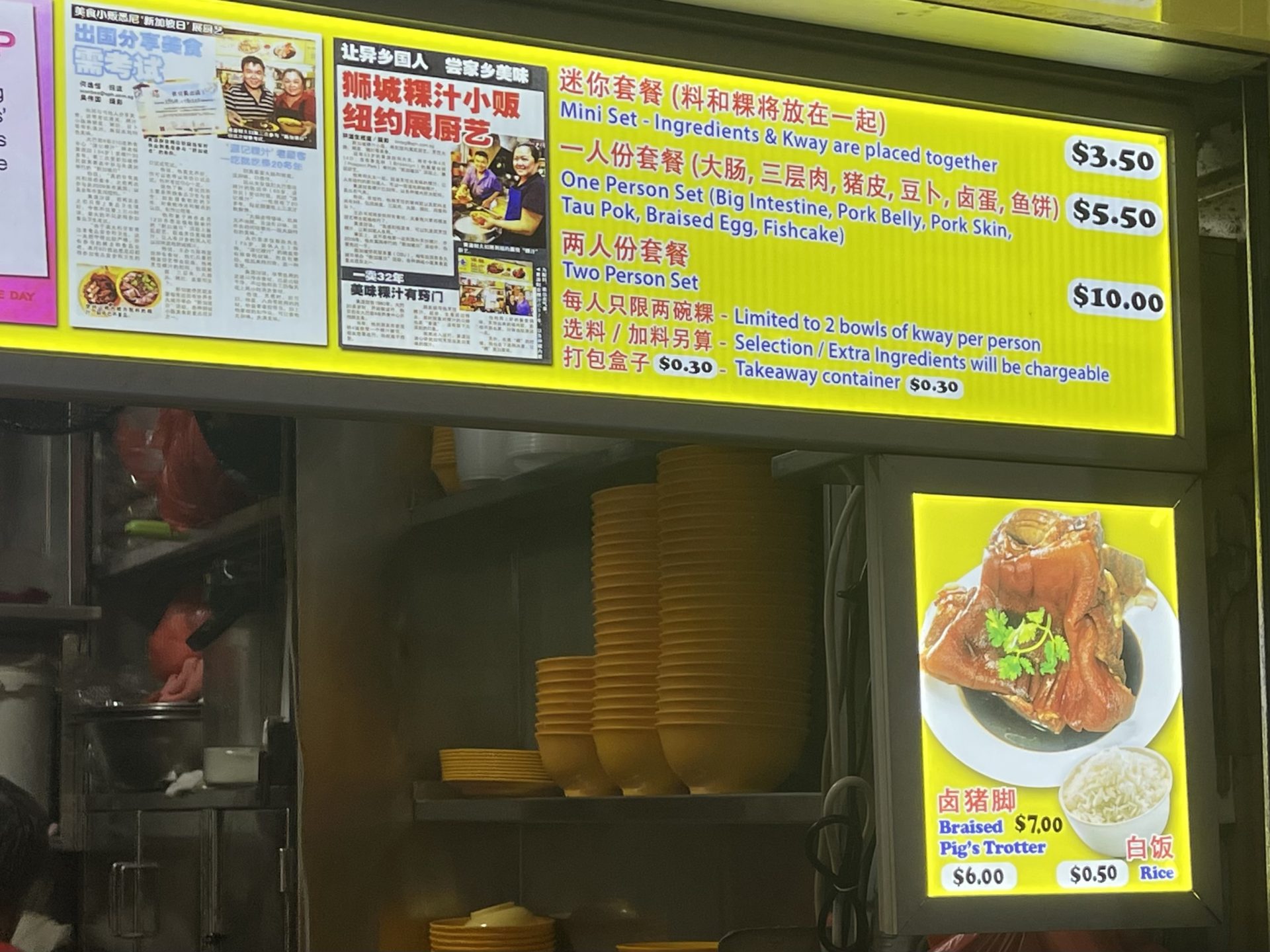 Faced with a bright yellow storefront, it’s as if I got greeted by a wide smile. Its signage lists a broad array of media features that reflects their hard work throughout the years. What did I say? I told you they are famous. After striking up a conversation with the friendly lady at the storefront, she shared that the ingredients were braised non-stop in the herbal broth. They even prep a day in advance so it’s clear why their items are immensely rich in flavour.

I have to admit, I am not one that is usually thrilled about eating kway chap. Most of the time, it’s the people around me urging me to try. When I reveal my food preference, they immediately respond with “What? It’s a delicacy!”, or “You’re missing out!”

I have tasted many, and many stores have always left me with the same impression: All kway chap tastes gamey— not with Guan Kee Kway Chap though. This time, it left me with a pleasant takeaway.

What I tried at Guan Kee Kway Chap As a person who isn’t usually at the forefront of a kway chap store, I took quite some time deciding but I finally decided on the One Person Set. It seemed like the best option with its assortment of ingredients. For S$5.50, I thought it was the most value-for-money option because it came with a large bowl of kway doused in soup, with a platter of large intestines, pork belly, pig skin, tau pok, braised egg and fishcake. It also came almost instantly after I made my order. On a rainy afternoon, I had to take a sip of the broth first. Surprised by its strong herbal taste, it mellows down quite beautifully because of how silky the rice sheets are. The flavours come from the long hours spent simmering, as it was packed with aromatic notes that were lifted by the addition of coriander and fried shallots.

The broth is lighter in colour than most kway chap broths; I suppose they use lesser dark sauce in this, following the old-school taste of richness in the herbal flavour rather than highlighting notes of sweetness. This bowl is served with a generous portion of kway, all silky smooth as I slurped it away. Large portions always make me happy because at least I know I’m getting my money’s worth. Could I commend on how clean these intestines look? At one look you know that they do a good job in thoroughly cleaning the intestines. There wasn’t a hint of smelliness at all! Unlike most kway chap stores that I deter from, Guan Kee Kway Chap did a good job masking the gamey taste that come with uncleaned intestines.

Previously, I saw the lady having an easy time chopping these intestines up because they were just so tender! Obviously these were very easy to gobble down too. It is soft and not oily, and every component was perfectly braised. Next up, the braised pork was one of my favourite components in this whole dish. The meat was tender and it was neither chewy nor tough. The skin and fat ratio creates a gelatinous texture, and I really enjoyed how it melted in my mouth as I just kept going for it. Last but not the least, the true hero of the show. Don’t get me wrong, the whole dish was nothing short of amazing, in my opinion. But the chilli brings it to another level just because of the refreshing element that it adds to the dishes. It has a tangy flavour that balances between sour and spicy, elevating the taste of the intestines.

For people who would like to try out intestines for the first time, maybe you could give it a go over here and pair it with the chilli for the fear of the gamey taste!

A word of assurance, you definitely won’t get that here. In all honestly, it’s odd for me to say this because I thought that I wouldn’t enjoy this tasting. However, I enjoyed every single part of it. To my surprise, I finished the whole bowl in a seating, and they had a huge portion, let me remind you.

Guan Kee Kway Chap has served plates and bowls of delicacies that have brought loyal customers back over and over again, and this time, I’ll be back once they open their shutters. Not making a wasted trip again!

Thank you, for changing my mind. I guess you won’t see my face cringe when I talk about kway chap ever again.

Geylang Laksa Prawn Noodles with 59 years of heritage relocating down...