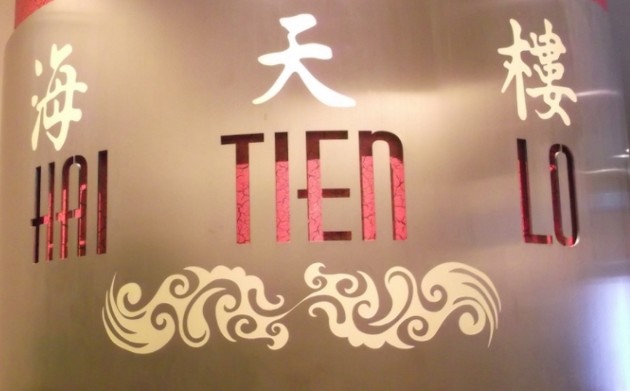 With the Chinese New Year just around the corner, many of us are starting to plan for our reunion meals with our family, friends, or business associates. Hai Tien Lo Restaurant, located within the premises of hotel Pan Pacific Singapore, offers a variety of auspiciously-themed dishes as part of its range of reunion lunch menus which are available from 25 January to 22 February 2016. The compilation of ingredients for this set of Yu Sheng is made up of an assortment of propitious food items which have names that are Mandarin homophones of various fortuitous terms and which are food items of treasure and value.

A food item worth of mention for this set of Yu Sheng is the hericium mushroom, termed “hou tou gu” (“monkey-head mushroom”) in Mandarin, a conveyance of bringing in the year of the Monkey.

This Yu Sheng platter is available for both dine-in and takeaway from 25 January to 22 February 2016. 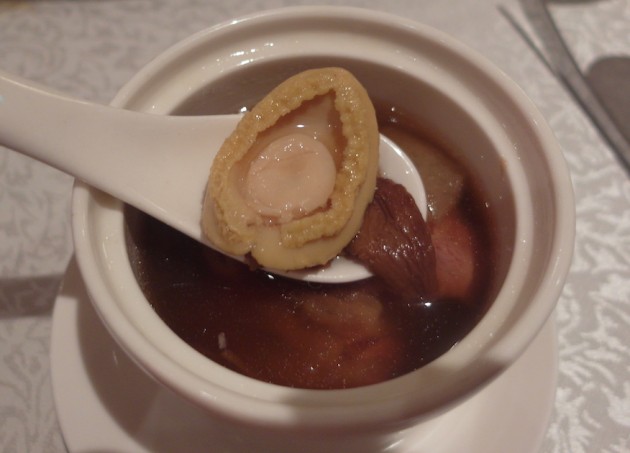 Nutritious “Buddha Jumps Over the Wall” with Matsutake Mushroom

Am not a usual fan of this traditional Chinese dish. However, the “Buddha Jumps Over the Wall” by Hai Tien Lo had changed my perspective with respect to the dish. 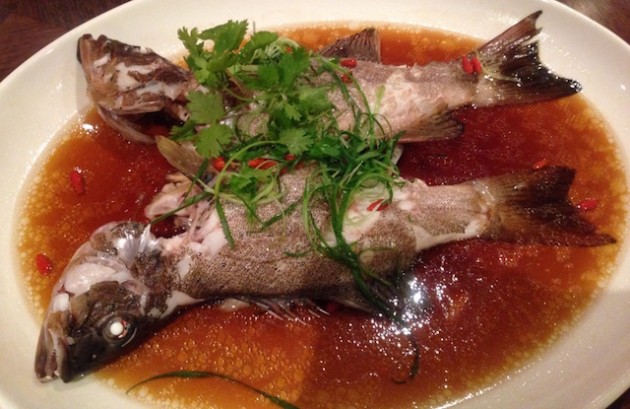 Paired with the Superior Soya Sauce, the fish is luscious and sweet, an essence which I very much prefer over other fish-based course meals that tend to be salty in taste. This meat of this steamed grouper has a slightly hard texture upon bite though, but is overall, delectable. 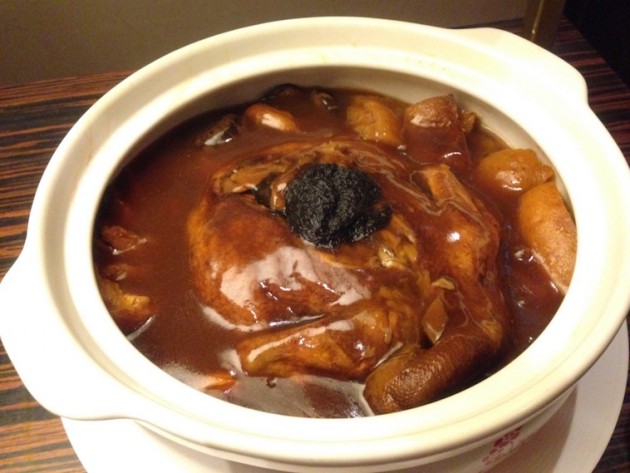 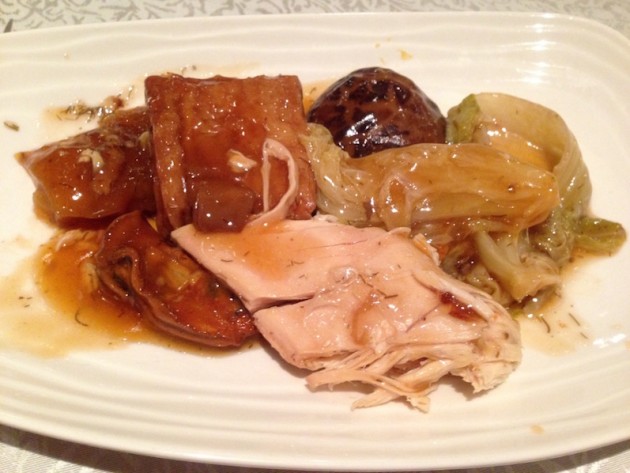 A mandatory propitious dish for Chinese New Year, the Treasures Pot a.k.a “pen cai” in Mandarin, is a pot of culinary treasures to proclaim prosperity and fortune.

Coupled with wonderful culinary skills and long hours of cooking, the combination of these simple ingredients exude rich flavours and an overall exquisite taste.

This dish is available for both dine-in and takeaway from 25 January to 22 February 2016. 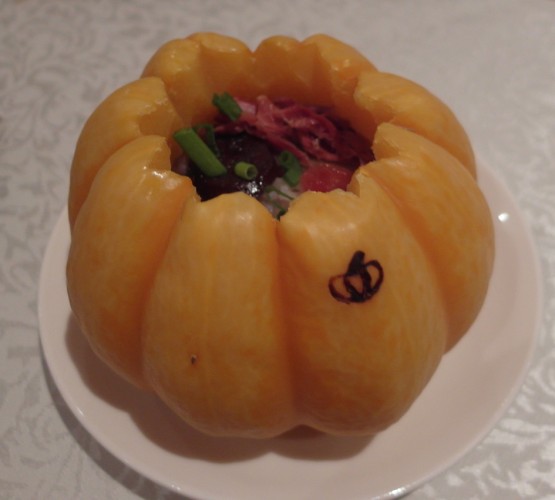 The use of pumpkin skin to contain the rice enhances both the aura as well as the aesthetic display of this dish. It also gives a congenial, sweet flavour to the steamed rice upon the first mouth of it.

The preserved Chinese sausages were of an adequate degree of essence. Taste is strong and the texture seems really fresh, wouldn’t have known that it was preserved meat. 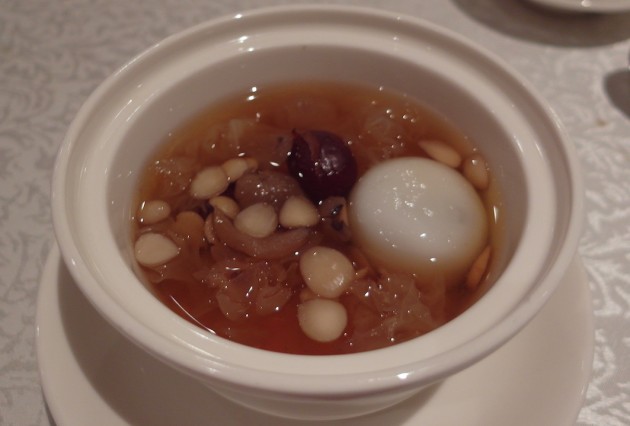 Also known as “ba bao cha” in Mandarin, the eight treasures tea served here at Hai Tien Lo has a rich, sweet aroma arising from the well-bred sun-dried fruits. However, the tea taste was subtle, as it was heavily covered by the sweetness of the rock sugar.

Along with the sesame-flavoured glutinous rice ball, I felt that the overall taste was a bit too sweet. But it was nonetheless, appetising. 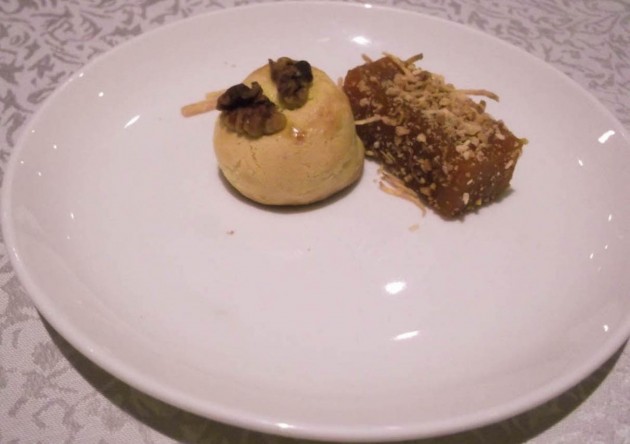 Most likely, the dish was described “prosperity” as the “nian gao” commemorates the advancement and success. The almond strips that formed its topping offered a perfect pairing of crunchiness and complementation of taste to the sweet and sticky cake.

At the same time, the cookie was palatable with its rich, heavy-flavoured red bean paste. The walnuts on top of it added a pleasing degree of crunch to it.

A plethora of splendid, auspicious culinary creations awaits you this upcoming festive season at Hai Tien Lo. Wait no longer and consider holding your Chinese New Year reunion lunch with your loved ones or business counterparts with an opportune set menu that will definitely enchant your taste buds and usher in good fortune.

Previous articleWan Hao CNY 2016: Auspicious Lunar New Year Treasures
Next article13 Romantic Restaurants With 1-for-1 Deals To Pamper Your Date Without Being Cheapskate