Spanning across two levels, you’ll find  a wet market and a bunch of retail stores selling plants, clothes, and other knick-knacks on the ground level. Head to the second floor and you’ll discover a foodie’s paradise offering a good mix of wallet-friendly hawker fare.

You may be wondering since Hougang is predominantly a Teochew area, why call it a Hainanese food village then? This is because back in the olden days, its present location used to house a Hainanese village— its food offerings have hardly any traces of Hainanese food, though.

I’ve done all the hard work, so just sit back, relax and enjoy this food guide that I’ve curated. Regardless of whether you’re planning a trip for breakfast, a hearty lunch affair, or a simple bowl of dessert, here are 10 hawker stalls worth checking out at Hougang Hainanese Village Centre. 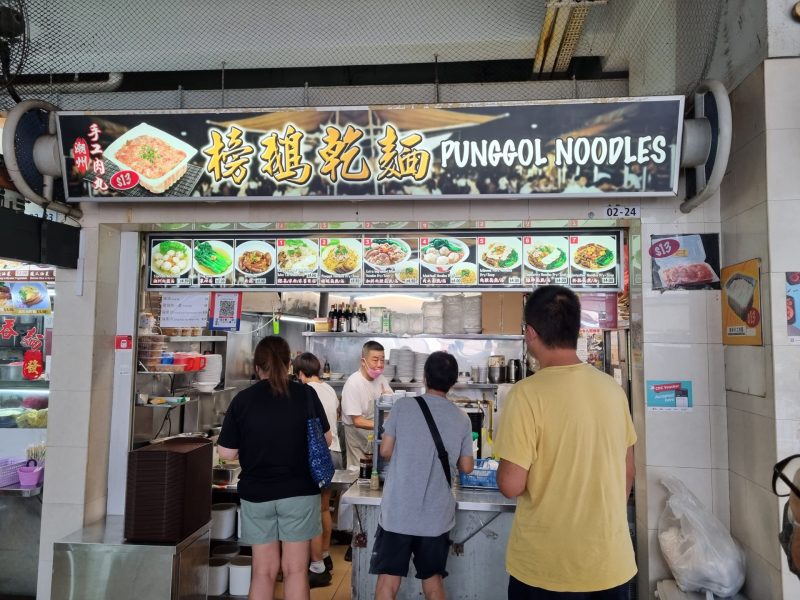 Punggol Noodles sells a variety of noodles, ranging from bak chor mee to kway teow soup. The owner, Mr Yee, still cooks each bowl of noodles personally, despite having lost one hand in an industrial accident back in 1984.

I tried the Intestine Noodles Dry (S$4), and didn’t detect any funky smell or taste from the intestines itself. That’s an indication that they were cleaned thoroughly and Mr Yee is clearly skilled at what he does— take note, innard lovers! The noodles had a great texture and the soy-based sauce was perfectly seasoned. The Teochew Meatball (S$4.50) was a hearty bowl of homemade meatballs which is unlike those you find in a store-bought packet. The rendition here was light and soft instead of the dense hard round ones typically served at other stalls. The meatballs tasted fresh and the natural sweetness of the meat went well with the savoury soup. Tian Tian Nasi Lemak has a few branches in Singapore, and I managed to give this particular outlet a go. They’re like your typical economical bee hoon hawker stall, where you’ll get a choice between coconut rice, white bee hoon, kway teow, black bee hoon or noodles. They also serve Lontong (S$3) and Nasi Lemak (S$3.50). I decided to order the Nasi Lemak, which came with a heap of coconut rice, one sunny side-up egg, one whole chicken wing cut in half, otak, sambal and a serving of ikan bilis with peanuts.

I wasn’t expecting anything much for the rice, but I was blown away by its texture and aromatic coconut flavours. Everything from the egg to the chicken wing right down to the sambal was really good and tasty. The only thing missing were the cucumber slices.

Daily: 6am – 2pm
Closed on every alternate Tue The noodles are tossed several times between hot and cold water, which results in a lovely springy texture. The dry versions served here are flavoured with aromatic lard oil which enhances the smell and taste of the noodles— pork lard is heaven!

You can also order their Fried Wanton (S$3 for 12 pieces) as an accompaniment to your noodles. If you’ve decided to try Ming Fa Duck Rice at Hougang Hainanese Village Centre, do try to come during breakfast hours as they’re usually sold out by early lunchtime. When you’re here, be mentally prepared to wait as it’s a very popular stall. While queueing, don’t be taken aback if you don’t spot a menu on its signboard.

Serving mainly braised duck and pork belly which are their signature dishes, you can opt for the Duck Rice (S$3.50 for small, S$4.50 for large). Alternatively, you can try the Duck Rice Platter (S$6 onwards), where you’ll get a choice of braised items. It usually consists of braised duck meat, pork belly, pig skin (great to note, if you’re a fan), tau pok, braised egg and tau kwa.

Help yourself to the 2 variations of chilli: a crispy anchovy-laden sambal and an acidic garlic chilli sauce. In my opinion, these two condiments pair very well with the braised meats. The menu items are written in Chinese, so be sure to point at the pictures on the signboard if you’re unable to read them (or try communicating to them in English). I was transported back into time when I tried the Chee Cheong Fun. It had a taste of nostalgia, simple yet scrumptious!

On the other end, there was a variety of Pancakes sold at only S$1.20 each. The flavours included: peanut, coconut, red bean, cheese and chocolate. The outer layer of the pancakes were crispy while the insides remained moist and soft. My coconut pancake had a generous amount of filling which was a bang for my buck. With over 35 types of desserts on their menu, be prepared to be spoiled for choice at Soon Huat Cold & Hot Dessert.

I spent a good 5 minutes peeking at the menu from afar to check every single option out before making my decision. I settled for the Strawberry Longan (S$2.20), which had strawberry puree, tadpole seeds and canned longans resting on a bed of crushed ice. The puree was sweet and tart at the same time, and paired really well with the sweet longans. I also tried the Sea Coconut Cocktail (S$2.20) that came with an assortment of canned fruits like pear, grapes and cherries. What surprised me was the softness of the sea coconut slices, which were more tender than those found at other places. That’s not all, the old-school style Laksa (S$4.50 for small, S$5.50 for large) has a rich coconut gravy which is flavoured with loads of dried shrimp and fresh cockles. They also sell a range of snacks which are good side dishes for your noodles.

They even have a Fish Ball/Veg Ball/Meat Ball Soup (S$4.50 for small, S$5.50 for large) which is great for a cold, rainy day— perfect for those who cannot make up their mind on what they want.

One of the pioneer stalls at Hougang Hainanese Village Centre, Lorong Ah Soo Lor Mee is notorious for attracting long snaking queues. They’ve been practising their craft of making lor mee for more than 5 decades.

Their only dish, Lor Mee (S$4 for small, S$5 for large), comes served with shredded duck meat instead of the commonly-used mackerel fish. What’s the reason for this? As there’s a large population of old folks who live in the area, they decided to make the change to prevent them from getting choked on bones. For something more premium, you can indulge in their NZ Lamb Chop (S$12) and Chilled Ribeye Steak (S$13).

All of their dishes come with a side of French fries, baked beans, mini bun and cucumbers. To make your meal more delectable, add on some Black Pepper Sauce (+S$0.50). I learnt that the chef, Miss Lu, had zero cooking experience before taking over this stall from its previous owner. She had to learn everything from scratch. After many trials and tribulations, she finally gained the confidence to run her own business. I tried the Fried Hokkien Prawn Mee which used a combination of yellow mee and bee hoon. The noodles had a really robust wok hei flavour, and had absorbed the seafood umami-ness coming from the seafood stock used. The prawns and squid were extremely fresh and the yummy pork lard bits just added another depth of flavour to the plate of Hokkien mee.

11 hidden eateries to check out within Singapore’s industrial estates