Easily the most-ordered zi char dish, the humble har cheong gai has won the hearts of many Singaporeans (including myself) for its umami-packed crispy crust and juicy meat.

This isn’t just any good ol’ fried chicken wing. Each piece is marinated in a mixture of flour and fermented shrimp paste before being deep fried, thus resulting in that glorious pungent, salty sourness that we’ve all come to love.

No matter which zi char restaurant I end up having dinner at, this iconic dish always manages to land itself a spot on the ordering sheet. Keep reading to find out our top 10 spots to get the best har cheong gai in Singapore. 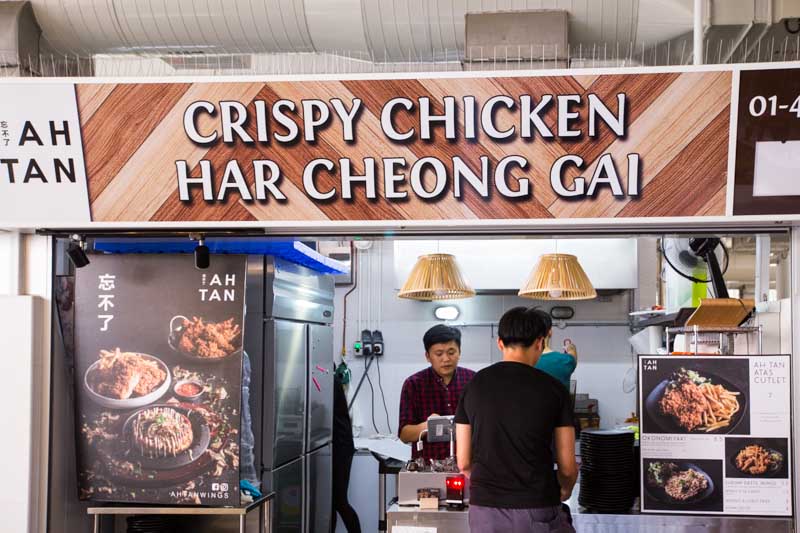 Young hawkers inject more than just new blood into the hawker trade— they bring along a fierce determination that continues to fuel Singapore’s beloved hawker heritage. One of them is 30-year-old Tan Wee Yang, the man behind Ah Tan Wings.

This humble hawker stall, located within Yishun Park Hawker Centre, specialises in har cheong gai. Interestingly, Ah Tan didn’t have any culinary background prior to opening his first hawker stall in 2017. He was a salesperson! It was his love for fried chicken that motivated him to switch careers. Ah Tan’s menu is as straightforward as it can be. Shrimp Paste Wings (S$2 per whole wing, minimum order of two wings) are available if you’d like to have à la carte portions of har cheong gai.

Heading to Casuarina Road for some late-night prata? You might’ve come across Ban Leong Wah Hoe, a popular zi char restaurant that has been dishing out classic favourites since 1986.

It was started out by Mr Teh Chor Joo and initially began as a single cai fan stall, but as business grew, it eventually took over the entire shophouse and became a full-fledged zi char restaurant. As of today, Mr Teh’s son, 28-year-old Noel Teh, has taken over the business.

This well-known eatery spans two whole units, but it’s always packed, so be sure to make a reservation on its website prior to dropping by to avoid being disappointed!

You’ll smell its famed Prawn Paste Chicken (S$8 for small, S$12 for medium, S$18 for large) even before it reaches your table.

Fragrant, pungent and oh-so-sinful, these har cheong gai are said to be one of the best in Singapore, as it’s served piping hot and perfectly crispy on the outside while remaining juicy on the inside.

It’s no wonder that this zi char eatery has maintained a 4.0 star rating on Google, even after racking in 1,170 reviews!

As an Eastie who has dined here all her life, I’m more than proud to recommend Seng Kee Black Chicken Herbal Soup for its har cheong gai— yes, this place sells more than just mee sua!

Marinated in a funky yet savoury fermented shrimp paste and deep-fried till crispy, each har cheong gai is delectably crunchy yet juicy. What I especially like about Seng Kee’s har cheong gai is its chilli— bright yet sour, with an addictive citrusy kick that’ll make you slather your entire chicken wing with it.

Tucked away in an inconspicuous coffee shop in Upper Boon Keng is Golden Charcoal Seafood, a zi char stall that was started by a pair of young chaps.

You might recognise its original head chef— it’s none other than Devid (aka Xiao Hei), the Indian chef who can speak fluent Mandarin and Cantonese, and recently left The Blacky Seafood to start his own zi char stall, Mr Blecky Seafood.

Its Prawn Paste ‘Har Cheong Gai’ is supposedly its third best-selling item on the menu (coming in close after its Chilli Crab and Claypot Fish Head Curry), and is available in three sizes: Small (S$11), Medium (S$16) and Large (S$22).

Deep fried till a glorious golden crisp and topped with plenty of fried batter bits, Golden Charcoal Seafood’s Prawn Paste ‘Har Cheong Gai’ will definitely be a favourite with the entire family.

If you thought that har cheong gai had to be limited to just chicken wings, think again. Bestin’ Serving the BEST is a Western coffeeshop stall located in Bukit Batok, selling items such as Har Cheong Gai Thighs (S$8.50), the classic Fish & Chips (S$7.90) and more.

Be sure to come hungry, because this unassuming coffee shop serves massive portions!

Its Har Cheong Gai Thighs, though only priced at S$8.50, comes with a large piece of deep-fried chicken thigh that has been marinated with fermented shrimp paste, mashed potato or fries, and house-made yuzu coleslaw. Alternatively, you can change your sides to aglio olio or fried rice with a sunny side up for just S$1 more.

If you’re feeling peckish, be sure to pair your meal with its well-loved Pulled Pork Cheese Fries (S$5.90), a crowd favourite featuring a pile of shoestring fries, chunks of tender pulled pork, nacho cheese and mayonnaise.

The running joke with old-school Bee Kia Seafood Restaurant has something to do with its location. It can be found along Thomson Road, right opposite Thomson Medical Centre, and so it became known as “that zi char place that husbands head to while waiting for their wives to give birth.”

Jokes aside, the regularly long queues at Bee Kia Seafood Restaurant will attest to its popularity, with plenty of its avid regulars patronising this nostalgic zi char eatery for many years now.

You might be surprised to know that they don’t have much of a menu, and the servers are known for quoting prices for zi char dishes based on how many pax you might be ordering for. For the Har Cheong Gai, you can expect prices to range from S$10 for six pieces to S$15 – S$18 for 12 pieces, and even S$30 if you’re dining in an extra large group! Holland Village XO Fish Head Bee Hoon Restaurant got its name from its first location— a stall in the heart of Holland Village. Now, it’s located just a street away from The Star Vista at Dover, and it’s easily recognisable thanks to its bright yellow signboard. Though it might look relatively paler than most of your other gorgeously deep-fried brown har cheong gai, Holland Village XO Fish Head Bee Hoon Restaurant still does this classic zi char dish justice. Each bite resulted in an audible crunch that was equally as satisfying, and the well-marinated and tender chicken was packed with fragrant prawn paste notes.

No. 5 Emerald Hill is a two-storey oriental cocktail bar housed within an early 1900s Peranakan shophouse, and despite its specially concocted cocktails, it also serves up a mean plate of Chicken Wings.

Its Chicken Wings (S$13 for half portion, S$19 for full portion) comes marinated with shrimp sauce and Chinese wine, giving it that extra oomph that elevates it from the typical har cheong gai that you see at zi char restaurants.

I mean, fried chicken and drinks are an absolute match made in Heaven, not to mention when you’re pairing these delectable har cheong gai with No. 5 Emerald Hill’s signature cocktails, such as the Mai Tai (S$17) or The No. 5 Cocktail (S$38), a two-coloured frozen cocktail that can be shared with a friend. I remember the first time I dined at Two Chefs Eating Place. This incredibly popular zi char restaurant, located at Commonwealth, is known for one thing: its butter pork ribs with condensed milk powder.

Due to its popularity, it quickly expanded and opened a second outlet along Sin Ming Avenue. If you’re not a fan of its addictive savoury and sweet milk powder pork ribs, we recommend you try its classic Har Cheong Gai as well.

This zi char staple, with a crispy and airy batter that has strong savoury notes, goes fantastic with the rest of Two Chefs’ best-sellers: Coffee Pork Ribs (from S$10) and Hotplate Beancurd (from S$9).

Well known for serving one of the best fish bone broths you can find in Singapore, Ka-Soh Restaurant has been through a rough time this year.

It had to shut down its 100-seater restaurant in Outram, which had been operating since 2007 and had been consistently awarded the Michelin Bib Gourmand since 2016, leaving its only remaining outlet at Greenwood Avenue.

The brand goes far back— further than 2007— with its founder, Tang Kwong Swee, opening his first restaurant called Peach Garden in 1939.

Ka-Soh Restaurant is one of the pioneers in the zi char business, and apart from its traditional Sliced Fish Noodles Soup (from S$9), you’ll find other classic zi char dishes such as Ka-Soh Prawn Paste Chicken (S$16 for small, S$24 for medium, S$32 for large) and Ka-Soh Deep Fried Frogs with Crispy Ginger Slices (from S$23) here.

With such a rich history going all the way back to 1939, Ka-Soh Restaurant is a definite must-visit when you’re looking for the best har cheong gai in Singapore.