House On The Moon: Enjoy Artistically Curated Desserts Among The Stars At Great World

“I would assume that the only place surrounded by (Michelin) stars, is a house on the moon”, revealed Chef Hüseyin Turan, co-founder and head chef of House On The Moon, when we asked him on how the unique name of his dessert bar came about.

An architectural artwork “suspended” in triple volume space, House On The Moon is an open-concept dessert bar located right smack in the middle of the newly refurbished Great World. Designed by award-winning spatial designer, SODA (Spirit of Design Analogy), the dessert bar’s eye-catching and modern architecture of bold lines enhanced with rose gold accents is not to be missed.

Spanning over two levels, the main dining area sits on level one where traffic is more prominent. Dark glossy bar counters surround the open-concept kitchen, making way to a 360-degree view of whatever is going on behind the scene. Level two houses the dessert bar’s retail space selling takeaway desserts and merchandises such as teas and canned beverages. 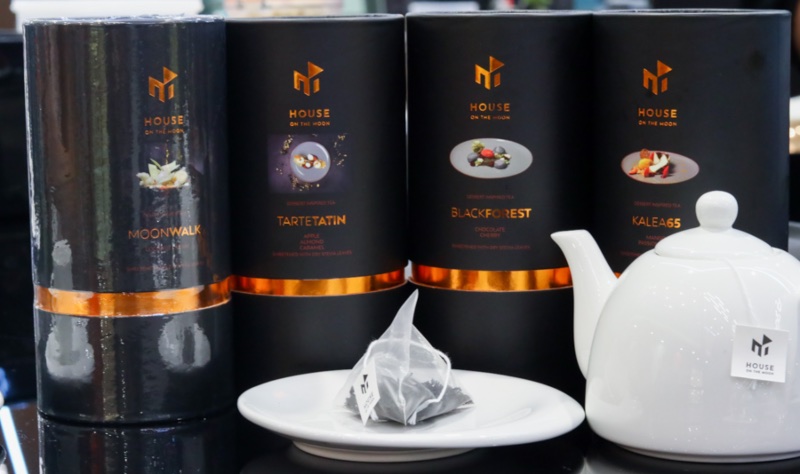 To further elevate and enhance the flavours of his desserts, each dish is paired with a corresponding dessert-inspired tea. The single-origin low grown tea leaves are sourced from Sri Lanka and then specially concocted by Chef Hüseyin himself, to provide an all-rounded dining experience to diners.

Our star-studded journey started off with the dessert bar’s signature item—Moonwalk (S$25), a milk-based dessert created in collaboration with Chef Juan Amador of one Michelin-Starred Alma by Juan Amador, specifically for House On The Moon. Inspired by the Milkyway which showcases different shades of cream, Moonwalk is a beautifully crafted white mess, with a variety of elements and an array of textures. Sitting on a bed of buttermilk nut and yoghurt crumble were mini domes of mascarpone cheese mousse laid perfectly on discs of fluffy vanilla sponge cakes and a scoop of yoghurt ice cream, finished off with thin pieces of white chocolates jutting out from its sides. 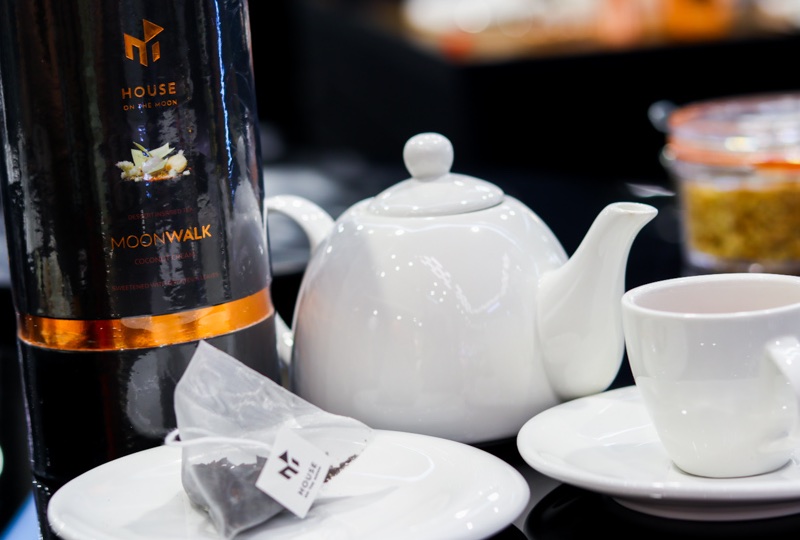 Deceptive to how it looked, the dessert was relatively light and refreshing, carrying a sourish flavour profile that complemented well with the nutty and buttery notes of the buttermilk nut crumble. We were advised by Chef Hüseyin to get downright dirty with our plated dessert with every element and flavour in a spoonful.

And boy, consuming the dessert this way was indeed a different gastronomy experience. Every bite was an explosion of different textures and temperatures which worked perfectly eaten together. 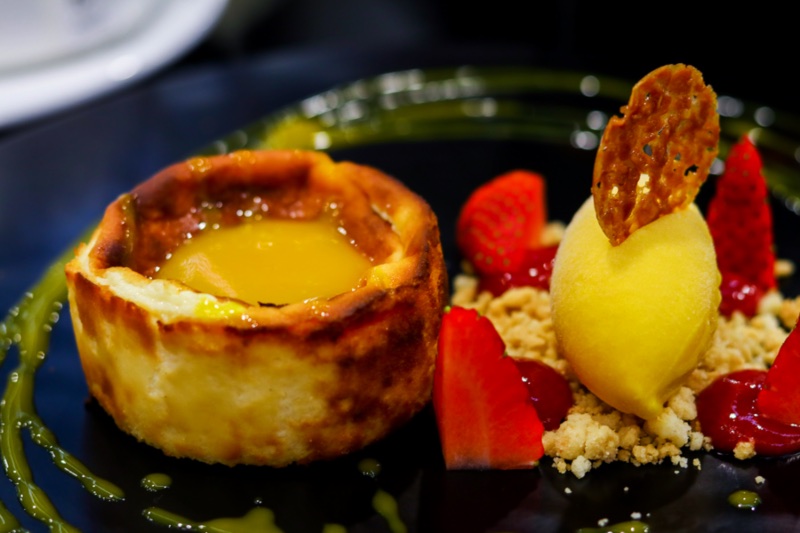 A drunken revelry led to the accidental creation of Kalea 65 (S$25), Chef Hüseyin’s proudest creation at House Of The Moon. A modern take on a classic cheesecake, I can confidently proclaim that this was one of the best cheesecakes I’ve ever had. 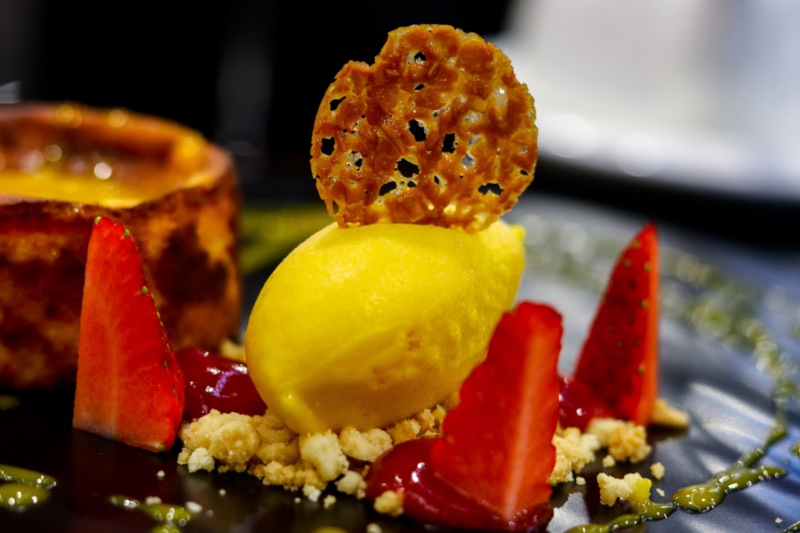 Little brother to a regular-sized basque cheesecake, there was something ugly-yet-beautiful about the appearance of this rounded burnt cheesecake. Heated in the oven upon order, the dessert was then skilfully plated with almond crumble, fresh strawberries and strawberry compote, finished off with a quenelle of mango passion fruit sorbet and passion fruit coulis. 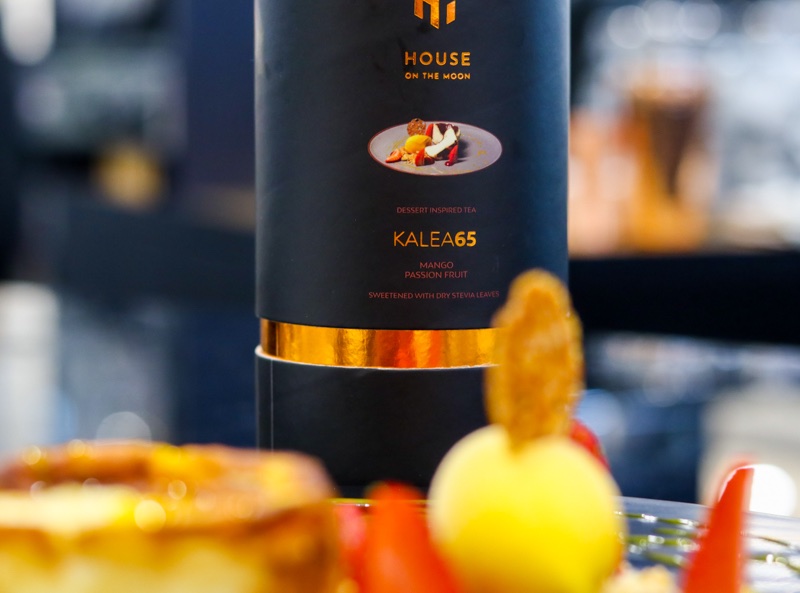 With a rough exterior and a middle that puddles onto the plate, the darken top of the warm cheesecake had a slightly burnt caramel flavour akin to brown butter. The lip-puckering acidity from the pool of passion fruit coulis perfectly balanced the rich, luscious cream cheese, leaving me constantly craving for another bite.

The mango passion fruit sorbet was a masterpiece on its own. Velvety and smooth, not icy at all. When consumed with the warm cheesecake, its contrasting temperature brought about a sense of cosiness that was somewhat familiar and comforting. 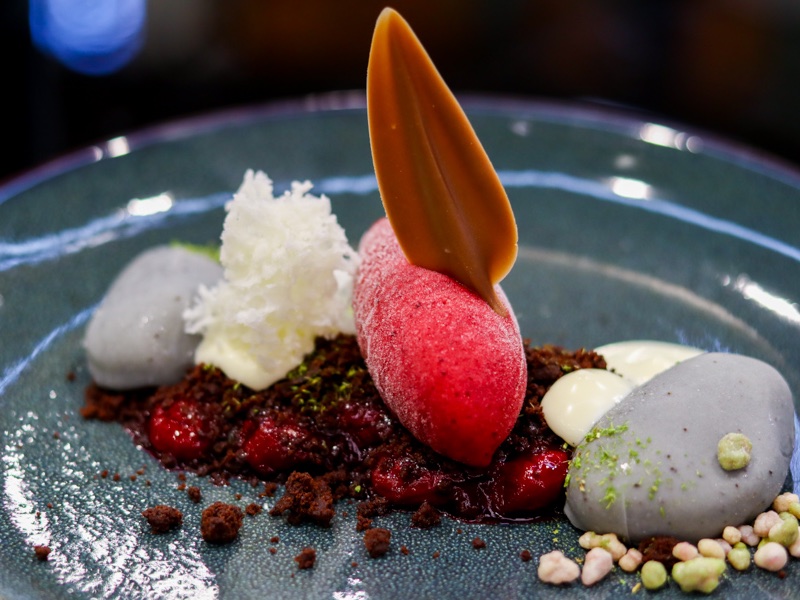 Imagine walking through a forest. The musky smell of rain, damp moss, wet tree trunks, soil-covered pathways and sweet subtle fragrance of flowers. If you were to interpret these elements into a dessert, Black Forest (S$25) would be the best representation.

Originally conceived at the three Michelin-starred Restaurant Amador in Mannheim, Germany, Black Forest was Chef Hüseyin’s spin on the iconic black forest cake. With the aim to capture the organic spirit of the woodland in mind, a walk through the forest was recreated on a plate with black cherry compote and dark chocolate crumble mimicking the soiled pathway.

Large stones and pebbles were represented by irregular shapes of grey chocolate-coated mascarpone cheese mousse and oat crumble, completed with a quenelle of raspberry sorbet and milk foam. 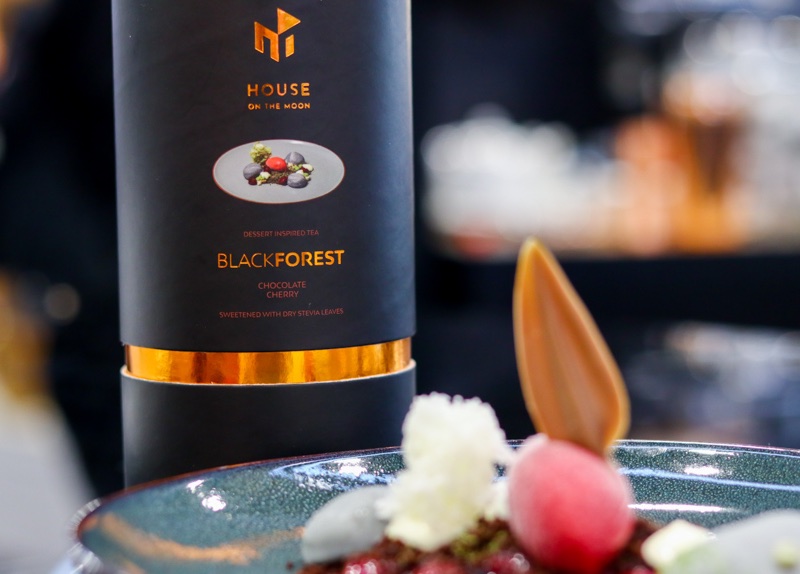 Tangy burst of the fruity raspberry sorbet complemented well with the bitter notes from the chocolate crumble and the subtle sweetness of the mascarpone mousse. The crowning touch that completed the entire dessert was the use of freeze-dried spruce needle. With its resinous, piney and slightly woody flavour, my imagination ran wild in the woods as I savoured every bit of this magnificently crafted dessert.

If you are looking for a dessert that is more classic and traditional, Tarte Tartin (S$25) is probably the safest option. Created in the 1880s by Stephanie Tatin, it is an upside-down apple tart that is made using apples, almonds, and sour cream. Similar but not quite the same as your typical tart, Tarte Tartin features a layer of thinly sliced toffee apples sitting on a bed of crisp pastry. Unlike some treacle tarts which sit heavily in my stomach, the dessert was light with subtle hints of fruitiness, enhanced with dashes of spice from the cinnamon powder.

The tartness from the sour cream foam and yoghurt ice cream cut through the sweetness of the apples, uplifting the entire dessert for a refreshing finish. House On The Moon’s Tarte Tartin, perfectly embraces the contrast of temperature and textures. The upside-down apple tart was just the right amount of warm embracing the cool ice cream and the almond crumble added a textural distinction of crunch against its slightly softened tart base—a harmonious combination that won over my heart in an instant.

Dessert proves its worth at House On The Moon, where every plated dessert speaks for and represents itself in the most glorious way.

To create a fine dessert, one has to combine the skills of a confectioner, a decorator, a painter, an architect, and a sculptor. Chef Hüseyin is definitely someone who possesses all the expertise and I truly can’t wait to dig deeper into his mind and taste more of his wonderful creations.

House On The Moon

House On The Moon Uniqlo SG collaborates with LiHO Tea and Beauty in The Pot...