When the idea of having vegan cuisine is proposed to a meat-lover, it’s quite expected to receive an unfavourable reaction.

That was me when I heard about HRVST (pronounced ‘harvest’), a vegan cafe opened by the same folks behind boutique gym Kilter Avenue. Nestled on the fifth floor of OUE Downtown Gallery, the cafe sits right behind the gym. 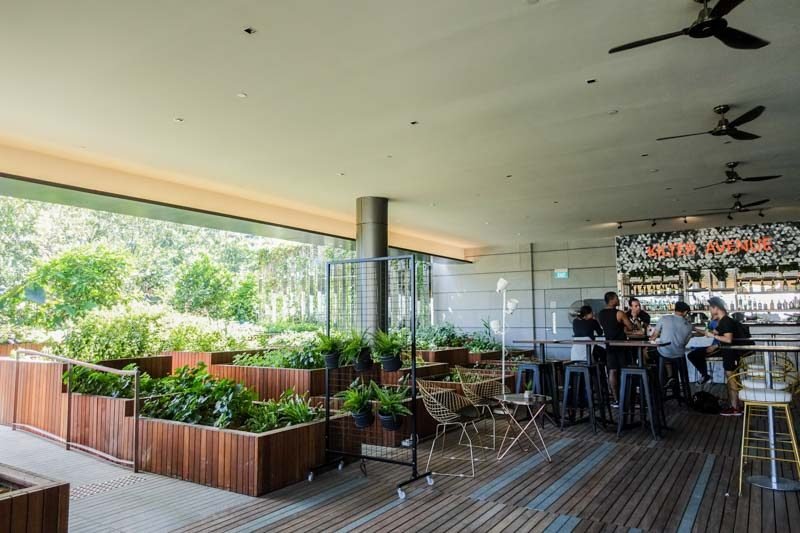 There is also an edible garden, managed by Edible Garden City, that sits on the outer decks where they have an alfresco bar area that gets busy come sundown. 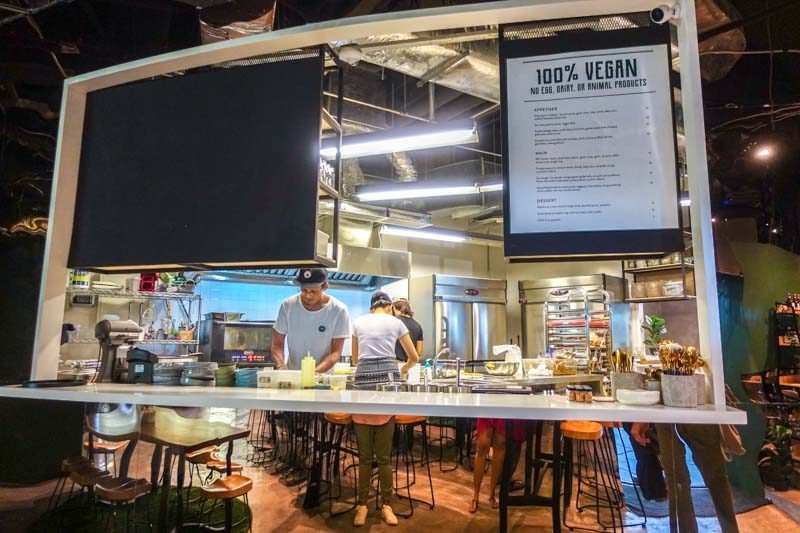 Inside, the space is relatively sparse, save for a couple of seats and tables and a full view of the kitchen, where Chef Dylan and Chef Addis get creative. The menu is very streamlined to feature the best of the ingredients they procure from the edible garden as well as local farms and those abroad. As a tiny introduction to what the kitchen is capable of (and to start changing my mind about vegan cuisine), I was served an amuse-bouche of twice-cooked potato spuds served with a side of vegan mayonnaise.

The dairy-free mayonnaise was made with aioli, soy milk and apple cider vinegar. Although this gem wasn’t featured on the menu, it already started to get me excited for what was to come. 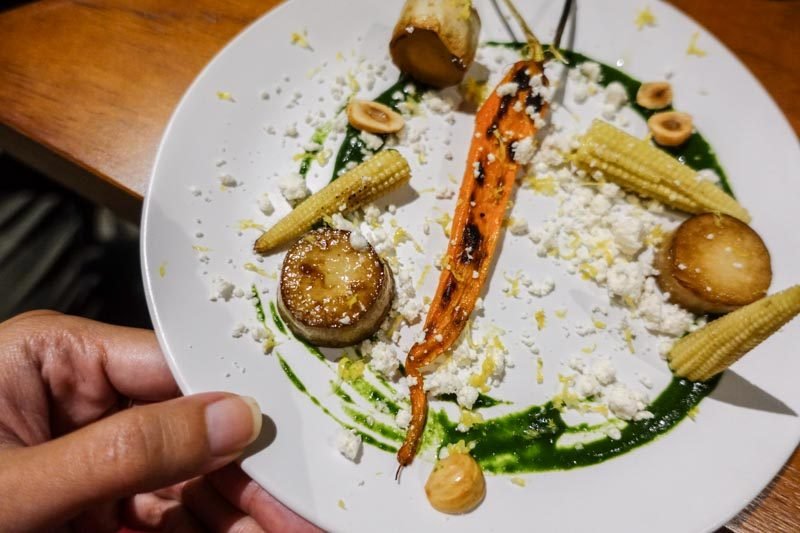 The first main I tried was the King Oyster “Scallops” ($12) with spinach puree, garlic “snow”, baby carrots, baby corn, toasted hazelnuts and lemon zest. There may seem like there’s a lot going on on the plate, but the flavours that came through were simple and clean.

Because the “scallops” were made of king oyster mushrooms, the smoky char on the edges provided a nice bite. The crunch from the carrot and corn were very welcoming, as well as the powdery soft garlic snow that was peppered on the ingredients. 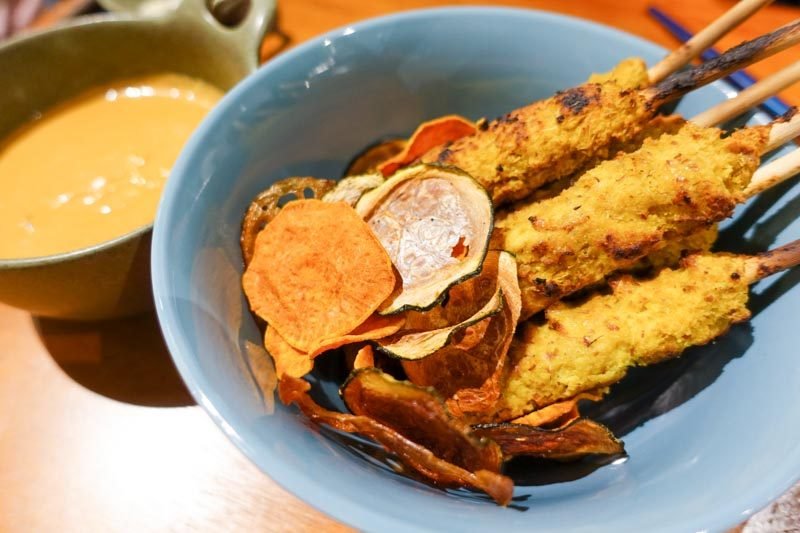 This next dish was the one I was most looking forward to; the Soy Satay ($10), with a classic peanut sauce and veggie chips. Needless to say, the veggie chips were addictive and extremely thin and crisp. Lightly salted, they added great balance to the creamy peanut sauce.

Considering the “meat” was made with soy, it was surprisingly dense and very satisfying, hitting all the right notes as the ideal replacement for real meat.

In addition to that, it served as an excellent vehicle to deliver more sauce into this carnivorous mouth – this meat-lover could’ve devoured several sticks of these without hesitation. 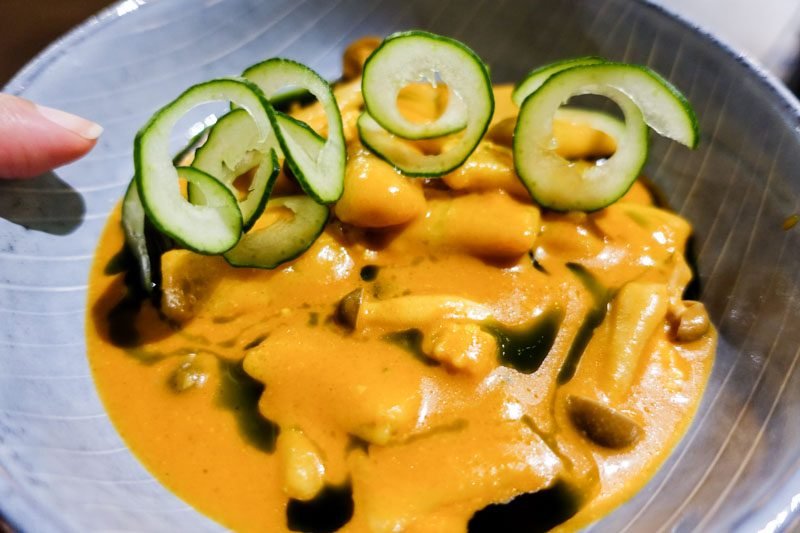 If you’re truly a fan of spicy dishes, this one will have you feeling very fulfilled. The Pumpkin Gnocchi ($16) is giving me cravings even as I type this out, as it’s slathered in a luxuriously rich tom yum broth filled with shimeji mushrooms, baby corn, coriander oil and Japanese cucumber ribbons. Every morsel was chewy, while the baby corn provided that slight crunch. The broth was adequately spicy and made me unabashedly lick the bowl clean. 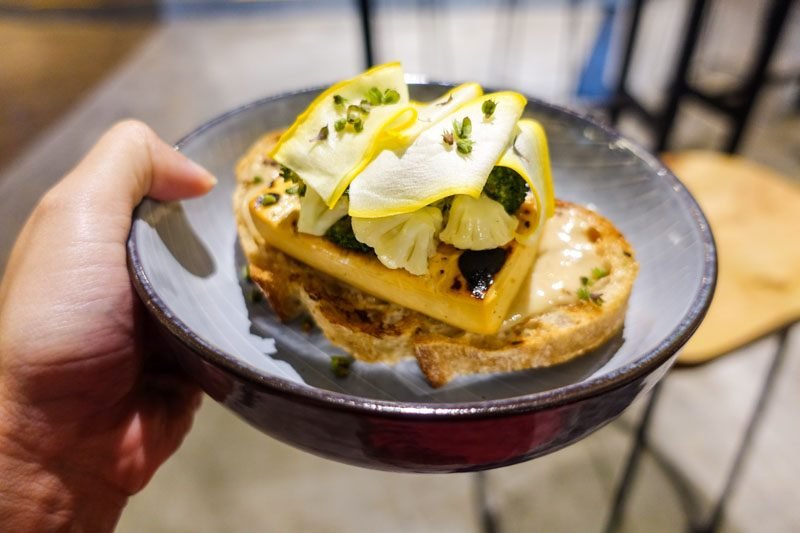 The last main was the Sourdough With Nut Spread and Orange Glazed Grilled Tofu ($14). The tofu was surprisingly dense — which was actually really reassuring to me.

The toasted sourdough was a tad tough to bite through, but the almost-fluid nut butter spread made the entire slice hard to resist finishing. The flavour combinations and textures worked really well together to create quite a hearty dish. 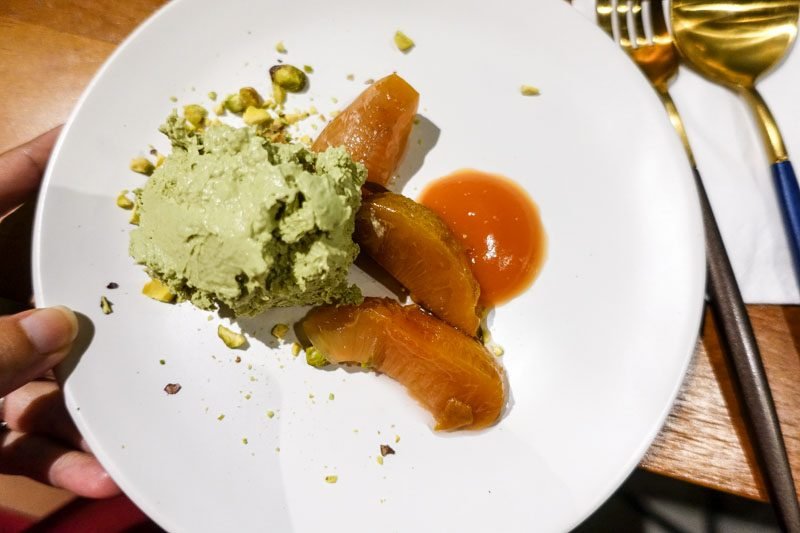 To mark the end of this astonishingly delectable tasting, I had the Matcha Ice Cream With Poached Plums ($8), complemented with blood orange puree and pistachio crumbs. I really love a solid matcha ice cream, so having this version substituted with coconut milk was a delight!

The combination was refreshing, light and had a great smoky nuance on the finish. The poached plums were slightly acidic and sweet, pairing really well with the creaminess of the matcha ice cream.

I had to re-examine my aversion to vegan cuisine after this session was done, for sure. Not that I was against eating more greens; I just had the wrong impression that vegan food equals bland dishes.

These dishes were anything but, and that’s exactly what HRVST hopes to make aware. Their premise isn’t to convert curious palates to veganism, but to let the world know that there’s so much that the cuisine has to offer.

Previous articleMinistry Of Ribs: We Found The Best Ribs At This Restaurant In Pandan Gardens
Next articleLearn How Wine Can Be Good For You At This Wine Tasting In Robertson Quay On 5 Apr