Jade: Usher In The Year Of The Rooster With Adorable Modern Chinese Cuisine Located in The Fullerton Hotel, Jade is a restaurant serving modern Chinese cuisine. The kitchen, helmed by Chef Leong Chee Yeng, serves elegant and refined food that promises to be a feast for your eyes and your tastebuds. 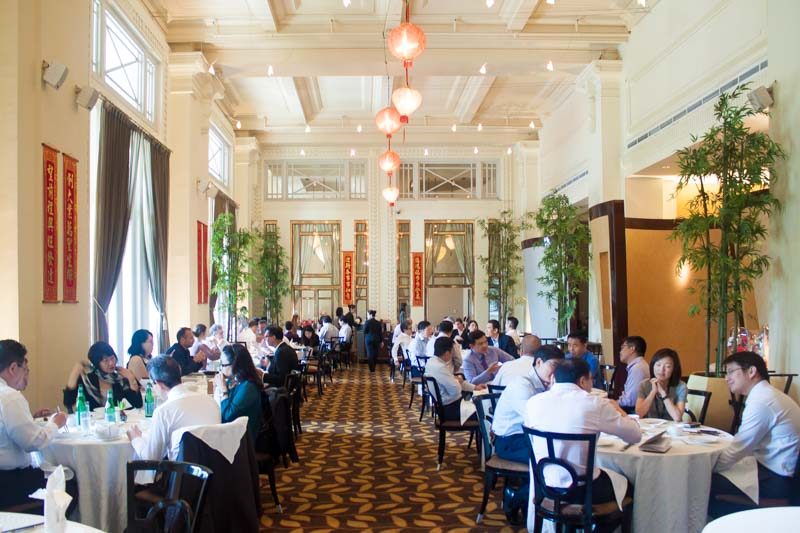 Donned in regal colours like gold and silver, the restaurant is an embodiment of opulence and sophistication. Coupled with the high ceilings, dining at Jade truly makes you feel like royalty.

The restaurant is fairly large, and is furnished with round tables- perfect for reunion dinners. For larger parties, bigger tables can be requested to accommodate your friends and family. 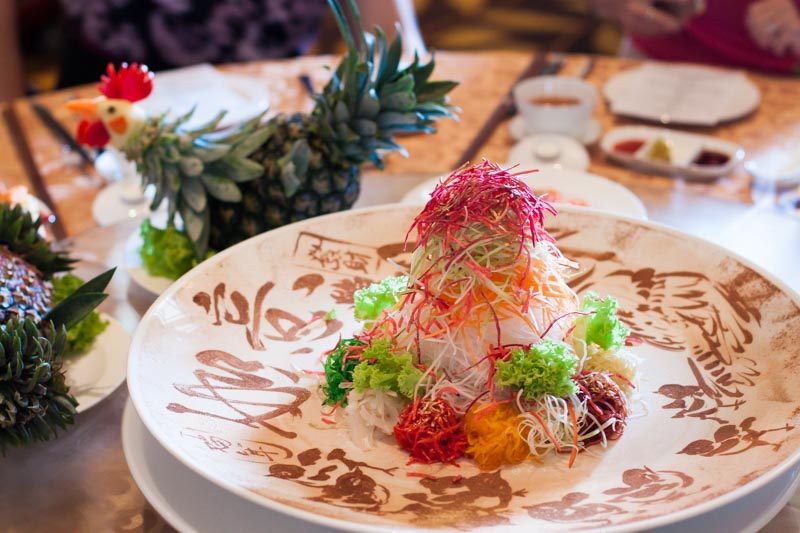 The Yu Sheng, a staple of any Chinese New Year meal, is elevated by the kitchen, creating their Eight Happiness Gold Rush Salmon Yu Sheng (Small $68 for 5 persons & below, Medium $98, Large $138. *Take-away available for 6 persons and above).

This unique Yu Sheng contains champagne jelly and a special honey pineapple dressing. Lettuce is also incorporated into the Yu Sheng as a homage to the “vegetable picking” in lion dances, representing the welcoming of wealth and fortune. Additionally, fresh salmon and salmon roe is added into the Yu Sheng. 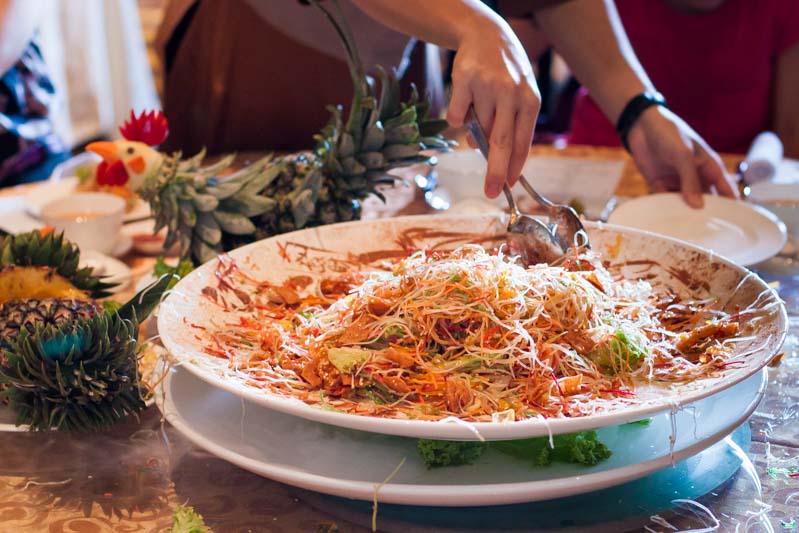 The fresh lettuce and honey pineapple dressing lifted the dish, making it light and palatable. The salmon roe added pops of saltiness, something one would not expect in a traditional Yu Sheng, which brought out a greater balance in flavour which we really enjoyed.

The champagne jelly also provided a textural contrast making the dish fun on the palate. We really appreciated the thought that was put into the dish, and how the different flavours and textures come together to form a harmonious dish.

We were also really impressed with the cinnamon powder patterns around the sides of the dish, hand-painted by the chef himself using the honey pineapple dressing as an adhesive before cinnamon was sprinkled on top. Next, we had the Roasted Pork Ribs with Thyme Seasoning ($18 per person, $44 per portion). The dish consisted of a small mantou (steamed bread) sitting atop a tender piece of meat, coated in a sweet and savoury sauce.

The pork was reminiscent of char siew (roasted pork) but with a sauce that felt more refined and clean. The pork was cooked well, which seemingly melted in our mouths, and the richness of the fat melded well with the sauce. 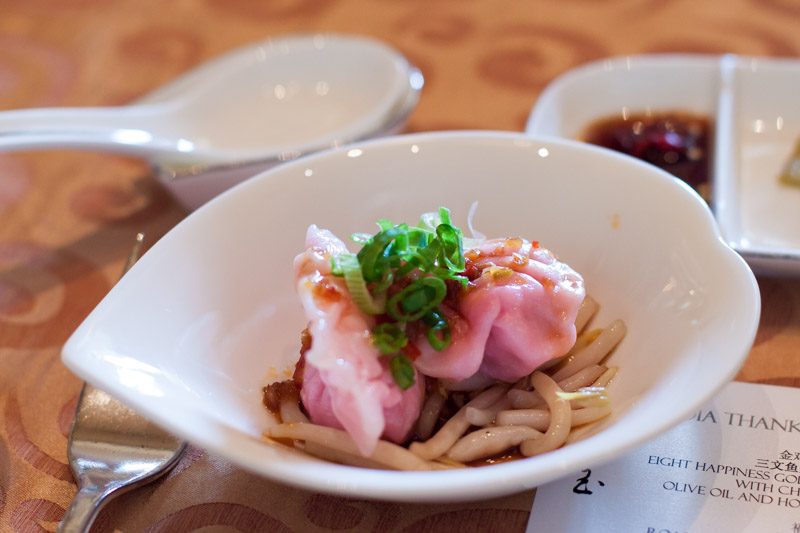 Soon after, the Poached Cockscomb-Shaped Chicken Dumplings ($16 per person (3 pieces), $44 per portion (8 pieces)) was served. To usher in the Year of the Rooster, these dumplings were creatively modelled after the comb on the head of roosters.

The dumplings were cooked to perfection, highlighting the ground chicken filling within. They were juicy and tender and the crunchy beansprouts provided textural contrast and acted as a refreshing element. 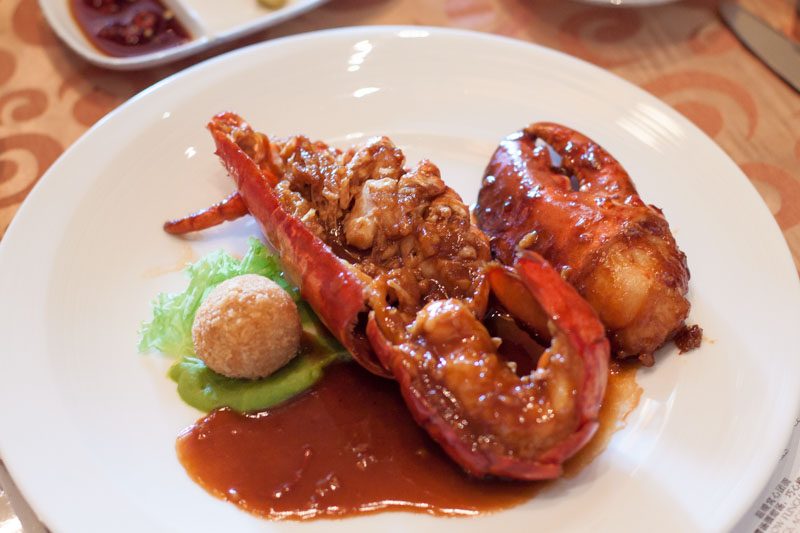 The Simmered Boston Lobster in Premium Soya Sauce with Golden Crab Ball and Foie Gras ($88 per order) came in a fairly generous portion, with half a lobster, a crab claw, the crab ball and a truffled foie gras spread below.

The lobster and crab claw were tender and separated from the shell with ease. The sweetness of the shellfish, together with the umami taste of the soy sauce created a robust flavour that mingled well on the palate. The crab ball was similar to a crab cake and the foie gras added a full-bodied flavour. 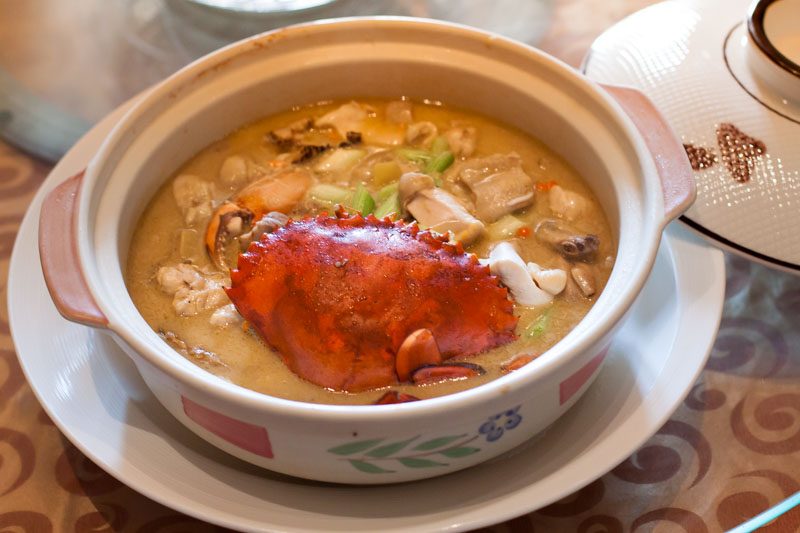 Stewed Chicken and Crab Meat Duo Chinese Wine in Claypot ($68 – half chicken), $128 – whole chicken) arrived, fragrant and with an abundance of ingredients. The concept of this dish was an East-meets-West, Surf and Turf. The vibrant orange colour of the crab stood out against the off-white colour of the soup. The crab and chicken added a sweet dimension to the flavourful soup and were complemented well by hints of sweetness from the wine. Both the chicken and crab were tender and extremely easy to eat.

We really appreciated how the crabmeat was extracted for convenience, preventing diners from making a mess trying to do it themselves. This was truly a delectable dish, which we polished up without hesitation. The ingredients were all well prepared, allowing their natural sweetness to shine through. Even though it seemed like a lot packed into a single dish, the ingredients worked well together, resulting in a cohesive dish.

The broth was perfectly seasoned and not overpowering. It had a pleasant mouthfeel and was not overly thick and starchy. Overall, this  dish that was not only tasty but one that was nourishing as well. 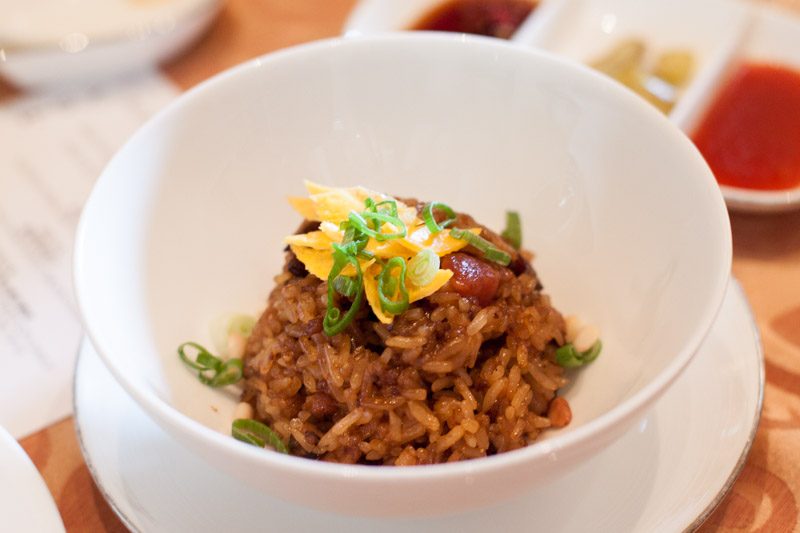 The final savoury dish was the Fragrant Wok-fried Glutinous Ricewith Chinese Sausages ($14 per person, $30 per portion) that came beautifully presented, topped with egg shreds and chives.

Every ingredient present had a prominent flavour that made up the dish. Additionally, the glutinous rice held together, indicating that it was well cooked. However, we felt that this dish was a little too pedestrian, and could have done with a tad more seasoning. 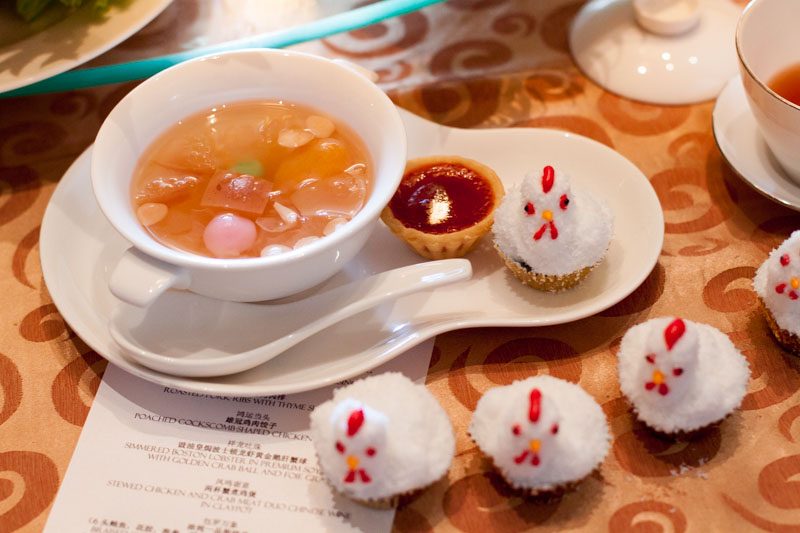 To end the meal off on a sweet note, we had the Double-boiled Apple, Snow Fungus and Almond Sweet Soup with Glutinous Dumplings ($1o per portion), accompanied with Cotton Cake with Chocolate Filling ($6 a pair) and Yam Paste “Nian Gao” Tart ($6 a pair).

The sweet soup had a strong flavour of apple, with pieces of apple and snow fungus scattered throughout. Glutinous dumplings were also added, which gave the dish a chewy texture. Paired with the soft apple and the slightly crunchy snow fungus, the dish had a myriad of textures. The soup was not overly sweet and was a refreshing way to end the meal.

On the other hand, the cotton cake’s appearance had us captivated. Made to look like tiny chickens, we almost could not bear to eat these cute creations. However, when we eventually did, the cake was extremely light and felt like eating a soft marshmallow. The rich chocolate centre, in contrast with the light cake was also a tasty surprise.

The tart, which is a modern take on the traditional nian gao (sticky glutinous rice cake) was an innovative way to try it. Mixed with the yam paste, the nian gao filling was not overly sticky and sweet. It felt like a match made in heaven when eaten together with the crumbly tart. Our favourite of the trio! The staff were attentive and patient, taking the time to split the dishes into individual portions, and topping up our teacups when they realised we were running low. They also constantly checked in on us and changed our plates and cutlery whenever necessary. This culminated in a lovely dining experience for us. 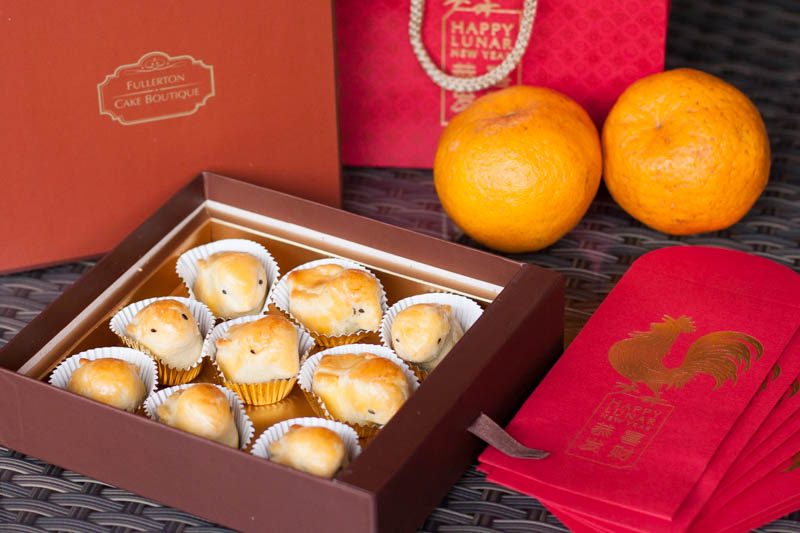 Finally, bring home a box of these newly launched Chick-Shaped Pistachio Cookies ($28 for a box of 9), which were buttery and crumbly, with a pistachio filling in the centre. It is truly a one of a kind treat that looks good and tastes even better, so get a box for family, friends or for your personal indulgence!

What are you waiting for? Call and reserve a table for Chinese New Year and enjoy everything this oriental treasure has to offer!