If you’ve travelled to Malaysia and enjoyed the hawker food there, you’d have noticed that some of their dishes are slightly different from ours.

You’ll also realise that it’s actually pretty hard to find authentic Malaysian food in Singapore. Penang-born Jason Khaw knows this too, so he has set up a stall in ABC Brickworks Market & Food Centre serving up the best of his hometown delights.

Before setting up this humble hawker stall, Jason used to work as a chef for the British High Commissioner. But after 14 years, he finally decided to pursue his dream of having his own hawker stall to showcase Penang culinary heritage. Diving into the Penang Assam Laksa 槟城亚叁叻沙 (S$3/small, S$4/large), the most noticeable difference from our regular Singaporean laksa was the colour.

Unlike our local laksa that’s usually in warm shades of yellow, orange and red, the Penang version is much darker. Served with lots of chopped onions, there were even chunks of pineapple inside the broth. If you’ve ever tried Penang assam laksa, you’ll know that it tastes drastically different from our local version. On my first sip of the broth, bright citrusy notes filled my mouth, with a sweet and spicy finish.

The spice is the kind that slowly builds up, though if you still find it too mellow, you can request for more bird’s eye chilli for a pop of colour and heat. 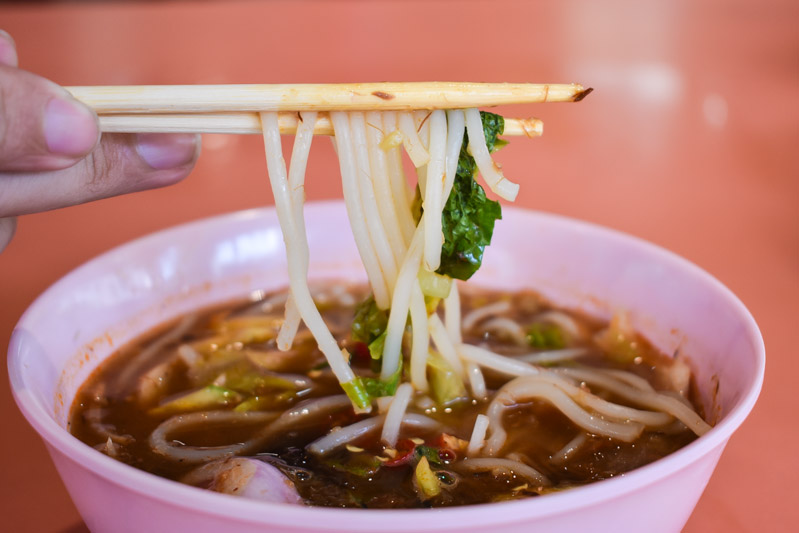 I found that the tangy and spicy broth went really well with the smooth and springy thick bee hoon, though you can also request for other types of noodles if you’d like something different. This appetising bowl of assam laksa certainly whetted my appetite! Moving on to something heavier, I also tried the Penang Fried Kway Teow 槟城炒粿条 (S$3/small, S$4/large). Jason Penang Cuisine does this pretty well, with a generous amount of stir-fried in for fragrance and flavour.

I ordered the kway teow with chilli, though you can also request for 无辣 (no chilli). Each mouthful was full of smoky wok hei, and I could really taste the peanut fragrance too. I liked that the dish was fried with pork lard — it may be a lil’ less healthy, but it’s a whole lot more delicious. 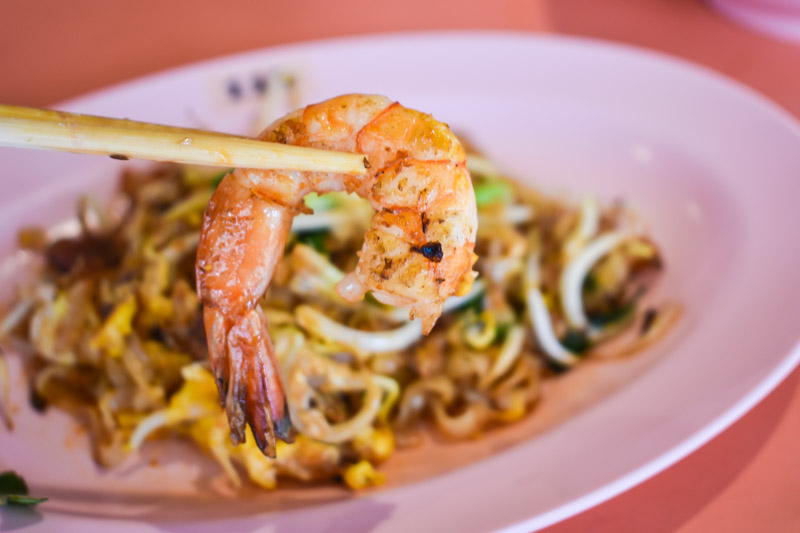 However, the S$3 portion might be too small for those of you with big appetites. The fried kway teow also comes with only one fresh prawn, which felt a little kiam siap (stingy) to me. 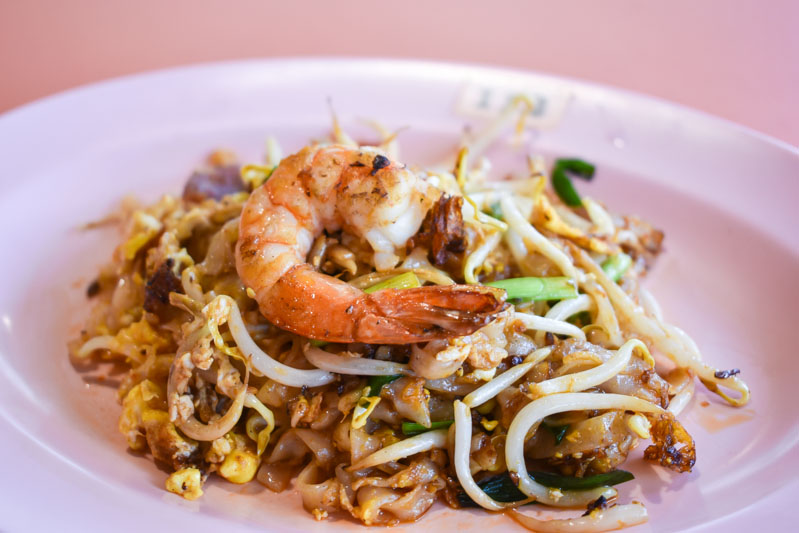 My dining companion also mentioned that the kway teow wasn’t as flavourful as those you get in Penang, where they fry the dish with duck eggs. I suppose we can’t have everything! Speaking of prawns, I decided to get the Penang Prawn Noodle Soup 槟城虾面汤 (S$3/small, S$4/large) as well. 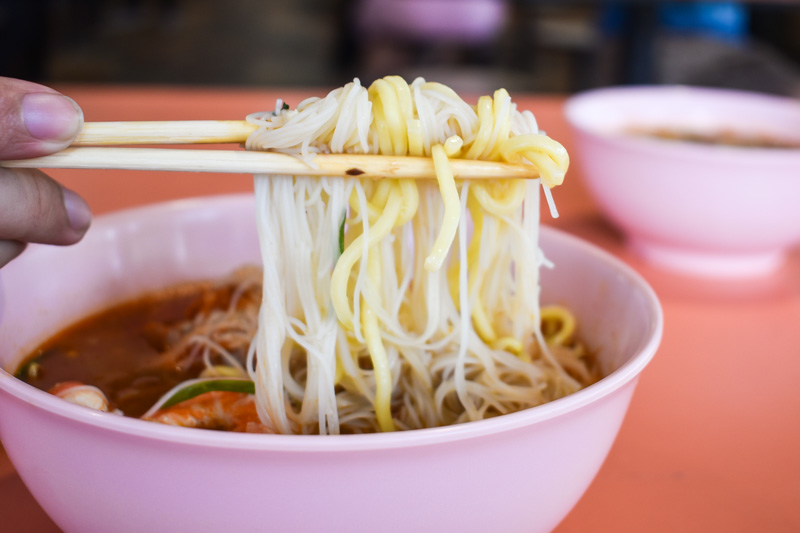 I got a mix of thick yellow noodles and bee hoon for the textural contrast. The bee hoon managed to absorb the broth better though, so for those of you who prefer soupy goodness with each slurp, bee hoon is the way to go. I liked how the soup wasn’t overly salty, but still packed lots of hearty umami flavour, especially with the addition of some chilli paste. My dining companion complained that this was a bit too spicy for him, but I rather liked the heat from the soup. 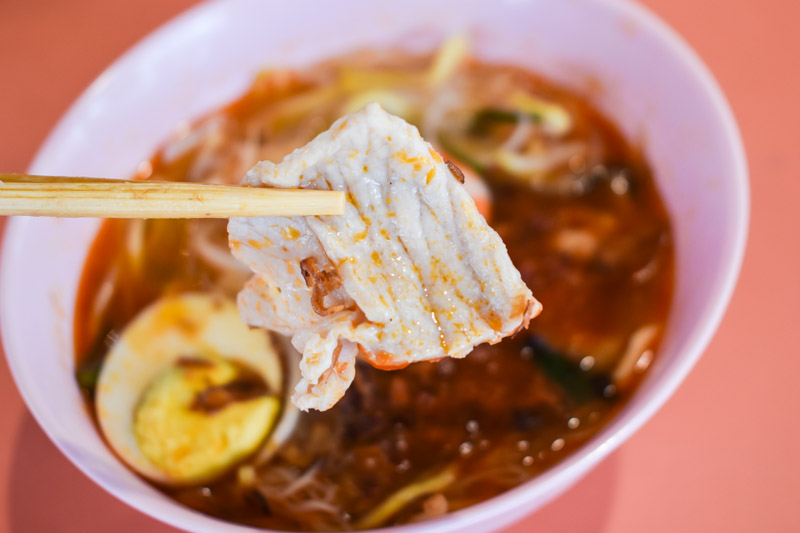 It came with prawns and pork slices, and I was amazed by how big the prawns were. The pork slices weren’t much to shout about, though I enjoyed the textural and flavour difference. 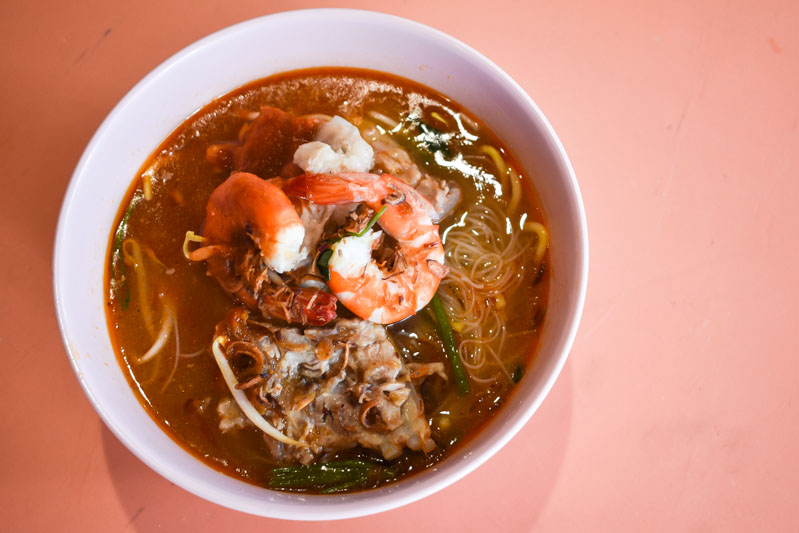 If you want something more luxurious, the Penang Pork Rib & Prawn Noodle (S$4/small, S$6/large) would be a good choice. The S$4 portion was already quite large, so it should be sufficient for one hungry diner. Jason Penang Cuisine uses the same broth for this dish, which warmed my belly nicely. This bowl of noodles came with two plump and juicy prawns, fork-tender pork ribs and half a hard-boiled egg. The pork ribs were definitely the highlight of this dish. I was really amazed by how easily the meat slid off the bone; I didn’t even have to exert much force! The meat wasn’t too gamey and had a good fat-to-meat ratio. With how tender and fatty the pork ribs were, I didn’t have to do much jaw work when chewing.

This was my favourite dish from Jason Penang Cuisine. Though it was a simple dish, it was bursting with flavours. Besides, it’s such great comfort food.

Before trying the food at Jason Penang Cuisine, I thought I wouldn’t like the assam laksa much since it’s so different from our local version.

But the stall won me over with simple Penang cuisine done right. I’d definitely bring my friends and family back here. No need to travel to cross the border for good Malaysian food anymore!

Previous articleSauce It: Make Your Own Customisable Comfort Bowls With Hand-Crafted Specialty Sauces Under S$10 At Pasir Ris
Next articleSkip The Geylang Serai Crowd For Woodlands’ Bazar Raya Utara Instead Till 1 June