It was quite a sight. Every single bowl sitting in the tray return cabinet was the same bright purple colour, signifying that it was from Ji Ji Noodle House. You could win all the official accolades you want (the stall has been included in every edition of the Michelin Guide since 2016) but the public endorsement tells it like it really is. What started off as a little pushcart in 1965 has become an internationally-renowned business at Hong Lim Market and Food Centre. It is now in the hands of the third generation— sisters Kristen and Jill— even as their mother Madam Lai still oversees the entire operation. 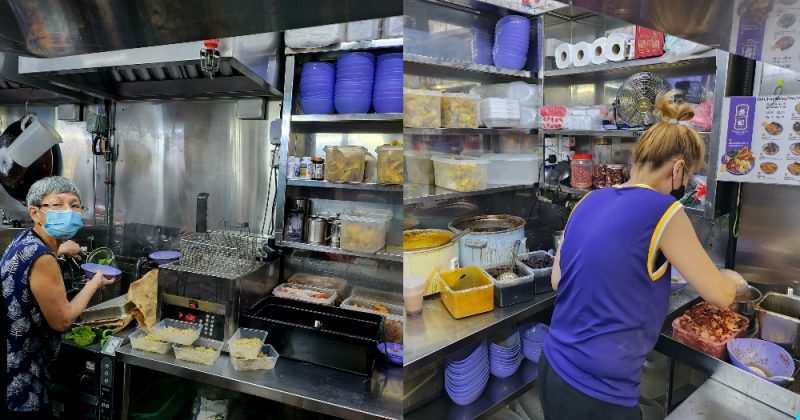 Older sister Kristen recalls playing between the tables here as a kid as her parents worked. She is the front of the business, both literally and figuratively. You will see her at the counter, whipping the famed wanton noodle signature dish together and interacting with customers. Jill works mainly behind the scenes, preparing the noodles and sauces. Ji Ji Noodle House occupies 3 stalls, units 48 to 50 on the first floor of the food centre. Kristen explains it is to keep the raw ingredients as far as possible from the cooking area— the absence of heat keeps them fresh longer which, in turn, means tastier food.

Just how tasty was the question of the day.

What I tried at Ji Ji Noodle House My first impression was: ingredient overdose! The deep bowl was brimming with its contents and I began to wish that I had ordered the S$4.50 version instead.

Topping it was more pork lard than I have been served in a single bowl my whole life. I counted 6 wantons— 3 fried and 3 steamed, 3 baby bak choy stalks, and more char siew than I could count. No, really, there was just not enough space in the bowl to be able to count the individual pieces. If you love your char siew, this dish is made for you. I found the noodles to not be the typical springy type. Instead, Ji Ji Noodle House serves noodles with more of a chewy texture. Though not ‘bad’, it was a bit unusual for my palate. My favourite part, though, was the fried wantons. Very crisp, they were also very thin, quite a standout against the usual chunkier versions that are the norm. I liked these better! The steamed wantons were tasty, too, and the pork lard injected a healthy dose of flavoursome goodness itself. You’ll notice that the soup served here is slightly darker. It also contains sliced red dates and goji berries. Kristen explains that these are a recent addition, introduced in response to the pandemic for their ability to improve blood circulation.

There were probably some secret ingredients in there also because it was really good!

It’s perhaps a little hard for me to justify this as a complaint but there was disproportionately more meat than noodles. Great for the strapping young lads who spend hours in the gym but quite a challenge for poor little me who has joined the club of bought-expensive-treadmill- only-being-used-as-clothes-hanger. It really seemed like a bowl of never-ending char siew when I was eating but I think there were between 15 and 20 pieces. I shudder to think what the S$8.50 bowl entails.

Ji Ji Noodle House is a Singapore institution and one that is consistently rated between 4 and 5 stars on Google. It is not your typical bowl of wanton noodles because of the unique texture of the noodles themselves. In terms of value for money, it’s a straight 5 out of 5. I simply cannot overstate how much meat was in my bowl. Coupled with the 6 wantons in my S$5.50 order, it was just too much for me. Next time, I may ask for the smallest size and more noodles. A word of caution if you’ve not eaten here before: don’t come at mealtimes if you don’t have the stamina to queue. The lunchtime line at Ji Ji Noodle House begins at around 11am and can last until 2pm. A storefront sign reminds us that the wait may be as long as an hour during peak periods. You’ve been warned.

Previous articleNew in town: RIANG — A casual dining concept with fusion of amazing flavours at Serangoon
Next articleLaksa stall turned into a bar: How did Madam Liew’s Bistro & Bar come about