“There is far more to Chinese Cooking” 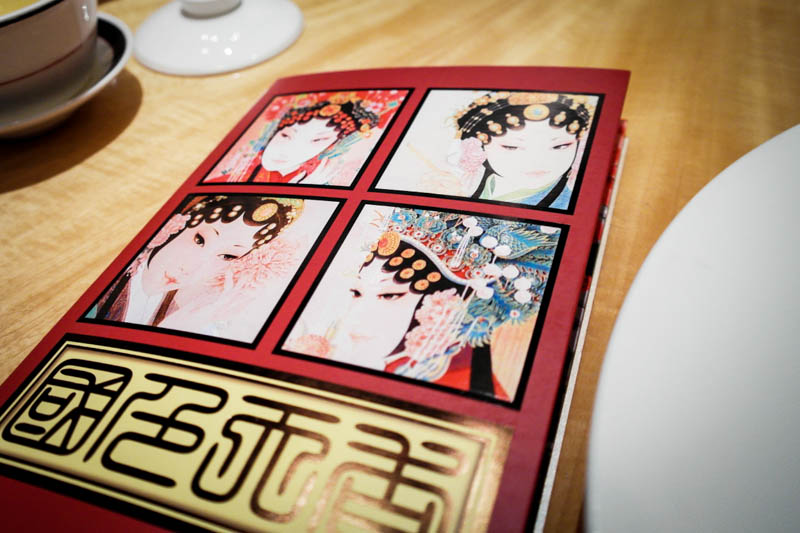 “The Four Great Beauties of China”, a 5-course set menu is designed to enthrall your sense of sight, taste and wonder as each individual course takes reference to the four great beauties. Allow each winning dish to bring you back to the different Chinese dynasties, in the comfort of Jiang Nan Chun in Four Seasons Hotel. From right: Chilled Cherry Tomato with Lychee Martini Water. Cherry tomato is fully de-skinned and prepared down to its essence with the soaked in a subtly sweet lychee martini. Its soft,yet resilient texture is a far cry from raw tomatoes, which actually tasted like an actual lychee from the texture and taste. I am pretty certain even those who do not particularly fancy tomatoes would enjoy this pairing.

This dish was inspired by Yang Gui Fei’s obsessive desire for fresh Lychees, where she would make the emperor send his soldiers far across the land just to get them.

Steamed Seafood Dumpling. Light, juicy prawn dumpling with handmade chewy, yet tender skin served in a mini woven basket was very flavourful. The prawns used were bouncy and firm to the bite. Deep-fried Shrimps Paste with Minced Mushroom ‘Pipa’ Beancurd. The beancurd was lightly burnished on the outside and soft and dense in the inside. Good textured but the shrimp paste and mushrooms flavours could have been more prominent.

Chilled Foie Gras with Osetra Cavier. This mouthful of foie gras atop traditional chinese biscuit left an indelible impression. The buttery base with a jolt of spring onion held its crunch well against the creamy foie gras that came with a tinge of sweetness. 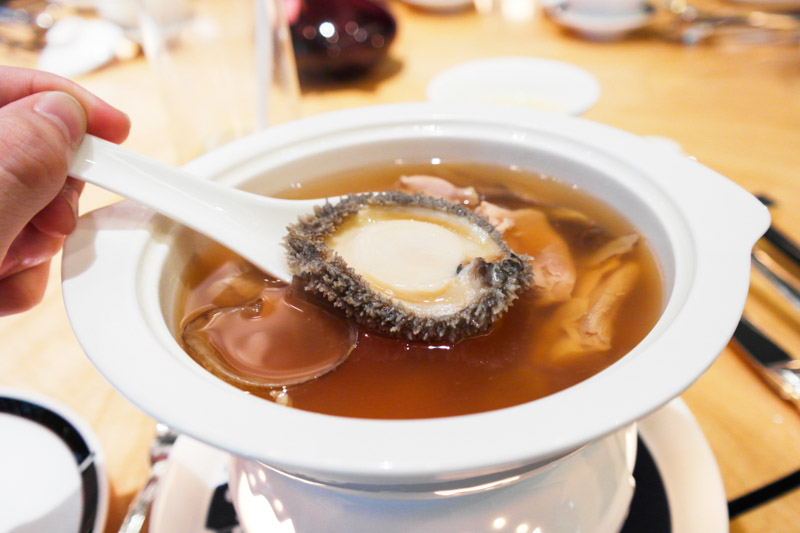 Double-boiled Abalone Soup with Calipash, Dendrobe and Chicken. A representation of Yang Guifei from the Tang Dynasty. Abalone is said to be the Queen of Seafood, akin to Yang Guifei, who was highly regarded in her time.

Time and again we have extolled the benefits of drinking Chinese soup. This is essentially double-boiled over low-heat for 10 hours so that a rich broth of free-range chicken and chinese herbs can grow in complexity and flavours. The end result envelopes your tongue with its intense yet light, clear yet rich essence.

A notable ingredient mention in the soup would be the Dendrobe, a highly nutritious herb from the orchid plant. This herb costs a whopping $320/100g. Besides being nutritious, the soup came with an individual serve of the South African Abalone. How very generous!  It is little wonder why soups in Jiang Nan Chun are favourites of political figures in Singapore. Steamed Atlantic Cod stuffed with Wild Mushrooms and wrapped in Rice Paper, Superior Broth and Shaved Black Truffle. The cod fish represents Xi Shi, a beauty from the Han Dynasty. It is said that her beauty caused fish to sink in shyness when they saw her reflection in the water while she washed her garments by the lake.

This dish came wrapped in light gossamer skin, or Vietnamese rice paper, (akin to clothes flowing in the water), was the best of the lineup. I am really glad that the truffle, used more commonly in French and Italian cooking, is making its way into Chinese cuisines. Tanginess of the mushrooms, sweetness of the cod and the strong earthy truffle sound very intense but all 3 came together beautifully and tantalised my taste bud. It was unerringly delicious. 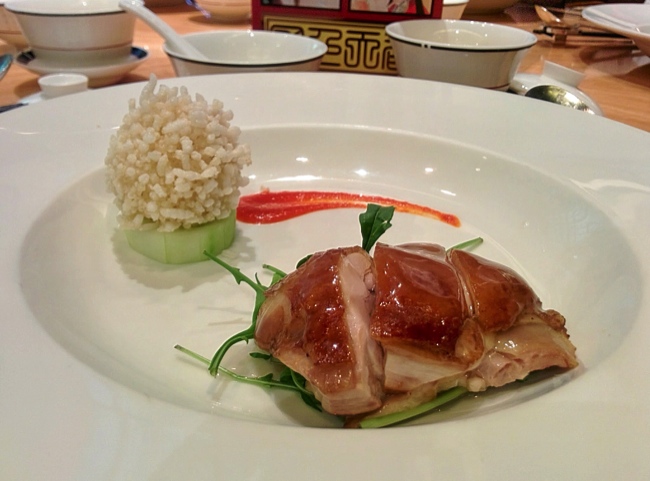 Smoked French Spring “Poussin” with Crispy Rice Ball.  The star ingredient here is the Pipa Chicken, used to embody the intensity of Wang Zhao Jun’s love for her homeland. She was a political bride,  from the Western Han Dynasty who held her beloved pipa (a musical instrument) in her arms as she was given away to a King.

The chicken thigh was smoked till perfectly charred. The incredibly succulent meat had a pronounced, but not overpowering flavour. There was a hint of sweetness from the chicken skin and this accentuated the juiciness of the meat. No sauce needed to cover this dish. I polished it off- including the skin that I normally avoid. Of all the dishes presented, this was the easiest to identify with and would make a reliable hit because we are all too familiar with chicken rice. 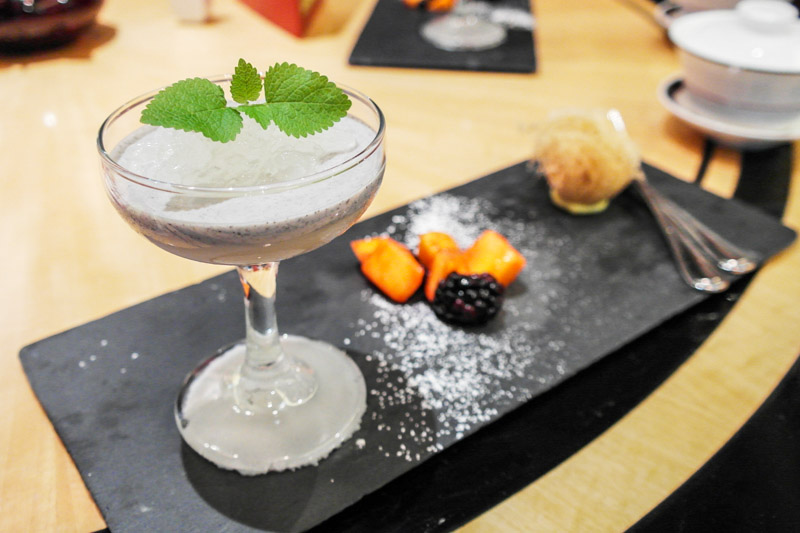 Black and White Sesame Pudding served with Superior Bird’s Nest and Salted Egg Puff Pastry with Almond Cream. This was the finale and both made a perfect knockout for the meal. The pudding had a soul of a black sesame ice-cream but was gussied up with a generous serve of bird’s nest.This added a wonderful chewy contrast to the cream-like pudding that was not over the top gelatinous. An alternate mouthful of sweetness from the pudding and saltiness from the salted egg pastry is a great marriage albeit lesser paired. It is henceforth telling of the last beauty -Diaochan. She was a beauty from the Eastern Han Dynasty who was not destined to enjoy a blissful marriage as she was used by the man she loved.

There is far more to Chinese cooking, and Jiang Nan Chun at Four Seasons Hotel offers a window into it, as I learnt after spending an afternoon with them. As you know more about the stories that inspired these dishes and the details that went into planning them, you will surely appreciate the meal a lot more.

This 5-course set meal gets a definite nod from me as nourishing Chinese cuisine. I can feel my vitality increasing already!