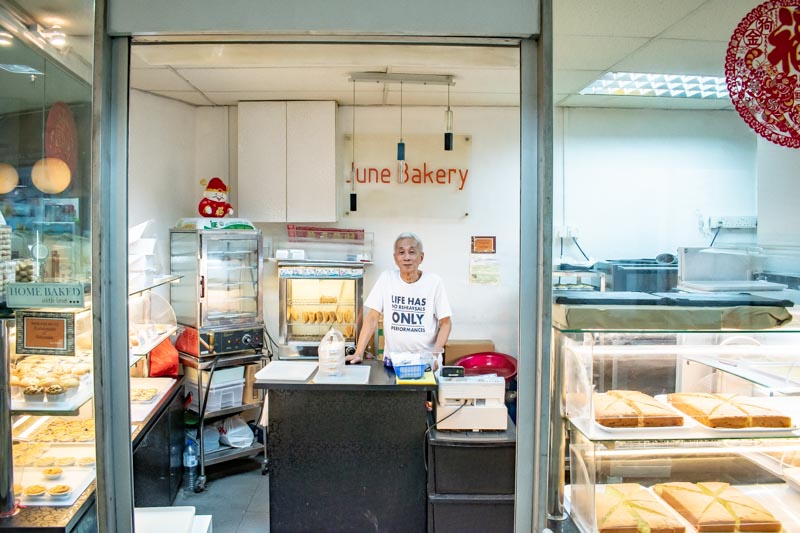 At June Bakery, you certainly can’t miss the tarts.

Tucked away in the basement of The Plaza along Beach Road, it’s one of those blink-and-you’ll-miss-it shops. Its small and unassuming appearance belies its popularity; it’s not uncommon to find snaking queues, and its freshly-made tarts sell out by 12pm. 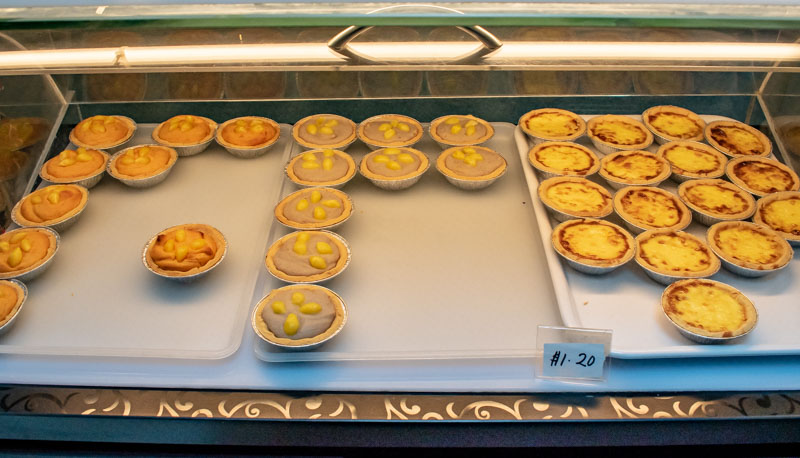 June Bakery opens at 7am on weekdays, though its owners start work as early as 3am—and it’s no wonder, considering that every tart, bread, cake and muffin here is made in-house.

To make sure that I could get my hands on the tarts, I trekked over at 9am. It’s not the most accessible of places, but I feel that this actually adds to its old-school charm. Even so, by the time I arrived, some of the display trays were already half empty.

I tried a total of four tarts, which were all priced at S$1.20 each: Sweet Potato Tart, Orh Nee Tart, Cheese Tart and the classic Egg Tart. 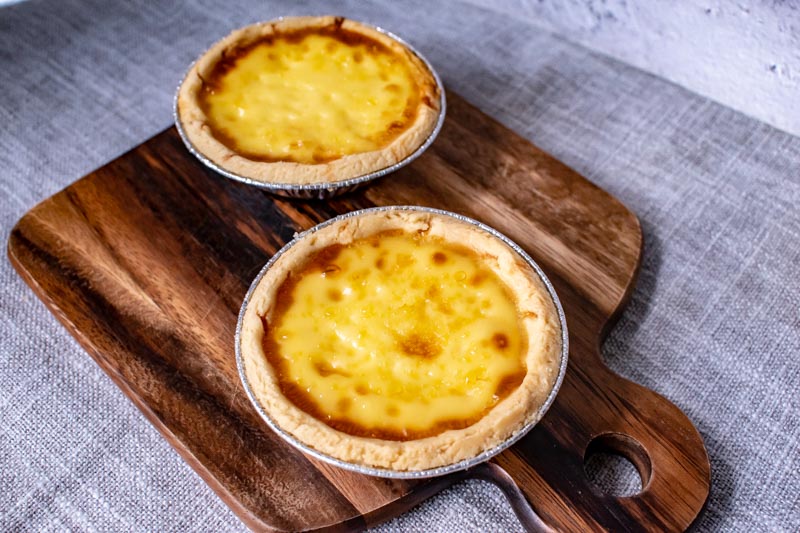 Let’s begin with the ubiquitous Egg Tart. This was a Portuguese egg tart, which veteran egg tart fans would know differs from its paler cousin, the Hong Kong egg tart. Portuguese egg tarts typically come with flaky, airy crusts—much like the large flakes of a croissant. However, at June Bakery, they use dense, crumbly shortcrust pastry. 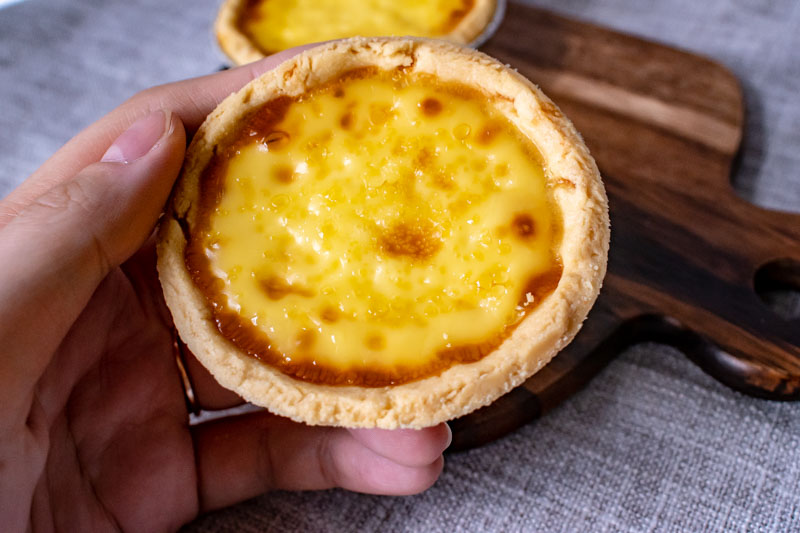 I liked how thin (albeit slightly dry) the crust was, because I’m all about that custardy egg filling. Slightly caramelised around the edges, the egg custard was really smooth and not overly sweet—which made this very easy to scarf it down.

You might remember back in 2016 to 2017, when the cheese tart craze was at its height in Singapore. With names like Pablo Cheese Tart, BAKE and the like, and queues extending for more than an hour, you know Singaporeans haven’t lost their kiasu edge when it comes to queuing for food. 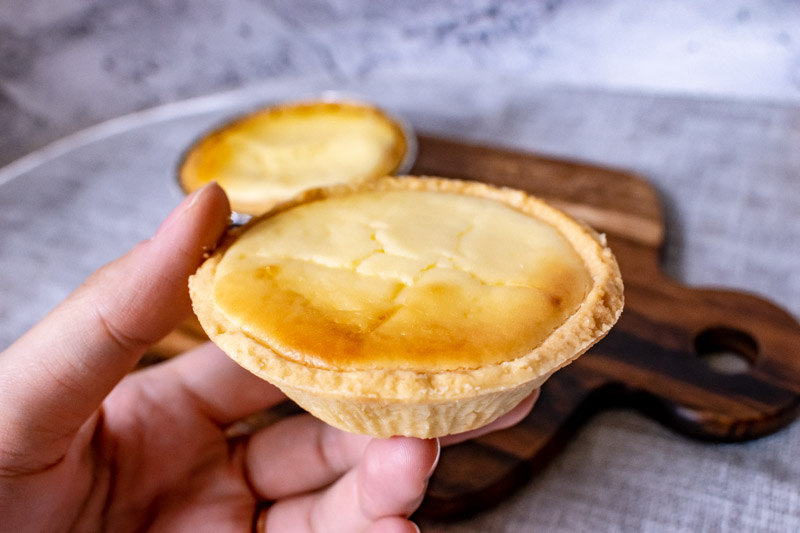 At first glance, the Cheese Tart here at June Bakery wasn’t much to write home about. Pale with the slightest browning on the edges, and sporting a crack or two on the surface, this was surely a far cry from the perfectly glistening creations from big names like BAKE and Pablo.

But you know what they say about judging books from its covers, because I dare say this cheese tart could go toe-to-toe with the big boys. Since I got it as a takeaway, the 20-minute car ride might not have done it any favours—heat it up in the oven before eating if you’re trying it. Nonetheless, I struck gold with the tart filling; thick, creamy and just the right balance of acidic and rich, it complemented the buttery and crumbly shortcrust wonderfully.

Also, it’s a third of the price compared to the big brands. Worth it! For more eclectic flavours, try the Orh Nee Tart. If you’re one of those who genuinely enjoy the customary yam paste dessert at wedding banquets (like me!), then this is right up your alley. Simple and nostalgic, the tart came with creamy, sticky orh nee paste, a thin tart crust made from the same buttery shortcrust pastry, and four ginkgo nuts. June Bakery definitely did not skimp on the filling; subtly sweet, fragrant and luscious yam paste filled each mouthful.

I particularly enjoyed the ginkgo nuts, which had a slightly gummy consistency which belied its nutty, subtly bittersweet flavour. 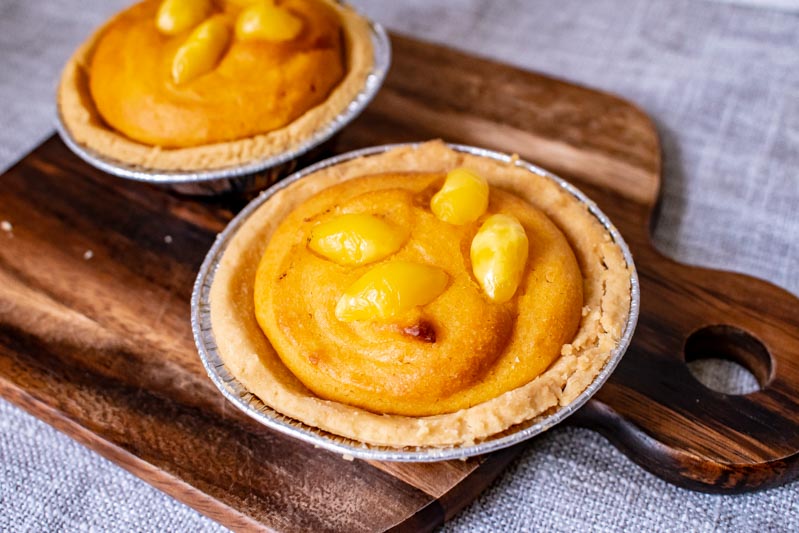 Another intriguing flavour is the Sweet Potato Tart, which isn’t something you see commonly. The sweet potato filling was quite chunky, which in turn contributed to a drier mouthful together with the crumbly tart shell. Like the other tarts, this wasn’t too sweet so you could probably finish one (or two) on your own.

For some reason, the ginkgo nuts in this tart were a little drier and harder, though I’d urge you to chew for a while longer for the characteristic bittersweet finish. I’m not usually a huge fan of sweet potato treats—I’ve never understood the hype of queueing for Don Don Donki’s baked sweet potato, for one—so this tart isn’t one I’d buy again.

June Bakery is but a humble confectionery shop, and one that’s likely to be lost amidst the flashier, trendier bakeries these days. But if you happen to be in the area, drop by for truly affordable bakes. The cheese tart puts the commercial brands to shame, after all.