Koreans know how to party — let’s not sugarcoat it. They know how to live it up with soju and drinking games, and their food culture can be just as rambunctious.

Restless, are you? Thankfully, there’s no need for you to book a ticket to Seoul; just scurry to this new establishment along Middle Road called K-JU. Inspired by the rowdiness and vibrancy you’d expect from the hip area of Hongdae, K-JU is a Korean gastropub that strives to give Japanese izakayas a run for their money. Grilled skewers, Korean comfort food, and flamboyant drinks are just some of the things you can expect here — perfect for a night of pre-gaming (if that’s your thing). 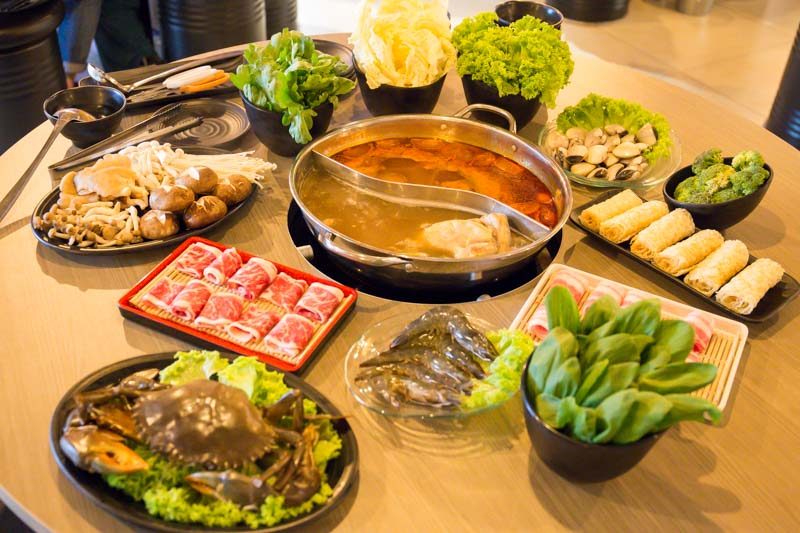 K-JU also shares its space with Captain K Seafood Tower, the restaurant that’s been garnering praise and attracting famished masses with its seafood hotpot. So if you’re still hungry for more, you can always top up from the latter.

But honestly, let me just start by saying I lurched out of K-JU post-meal, enduring the effects of a food coma and booze-induced wooziness. You will get bloated here. 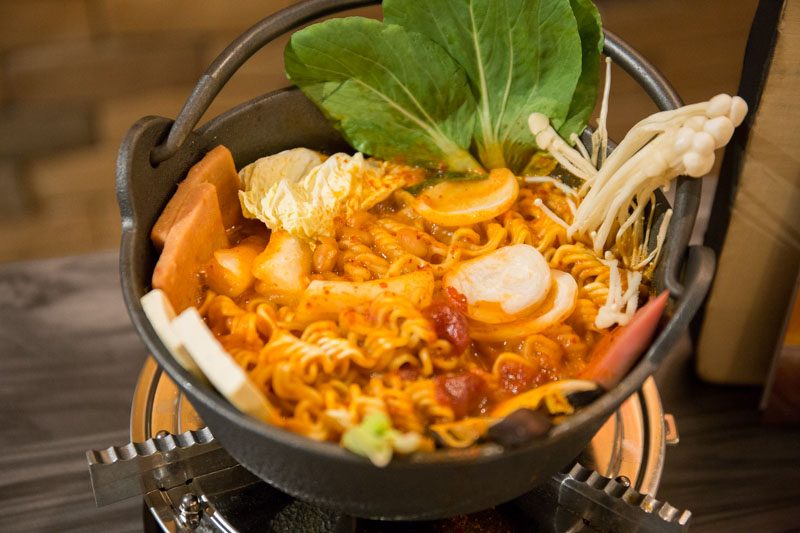 Dishes that will quickly fill you up include the Korean cuisine staple, Mini Army Stew With Bulgogi Pork & Luncheon Meat ($15). Don’t be fooled by the ‘mini’ tag though; this can easily feed a party of two if you’re having other sides.

The broth had a strong tomato and kimchi flavour, without being too spicy that it might put off those weak with spice (like yours truly). It also wasn’t too watery, which is always a plus point in my books. 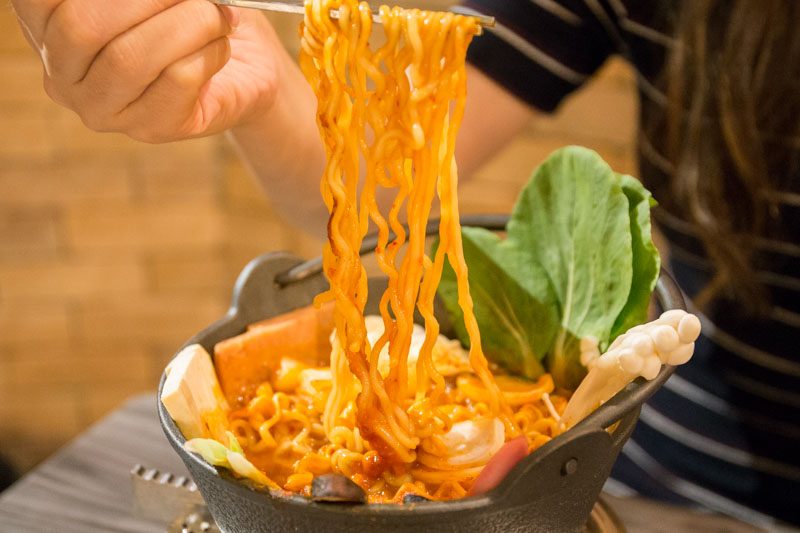 It’s chock-full of ingredients such as sausages, cabbage, enoki mushrooms, rice cakes, and of course, instant noodles. Definitely plenty to go around. Another carb-heavy dish that’s good for sharing is the Kimchi Fried Rice With Bacon & Cheese ($15). Likewise, while fried with kimchi, this didn’t pack too much spice. 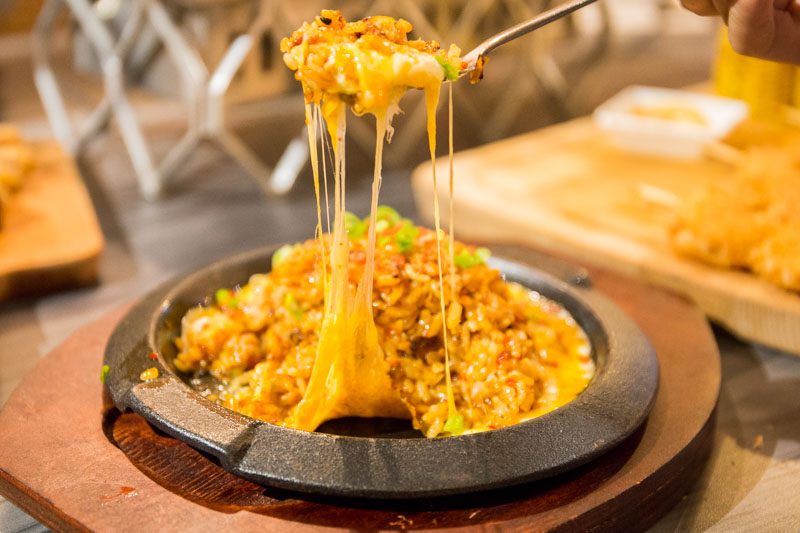 Make sure you dig up the rice with the salty melted cheese and charred bacon bits; who needs mac & cheese when you’ve got fried rice & cheese, right? Oh, you might also wanna gobble this down without hesitation, as the cheese did tend to harden quickly. 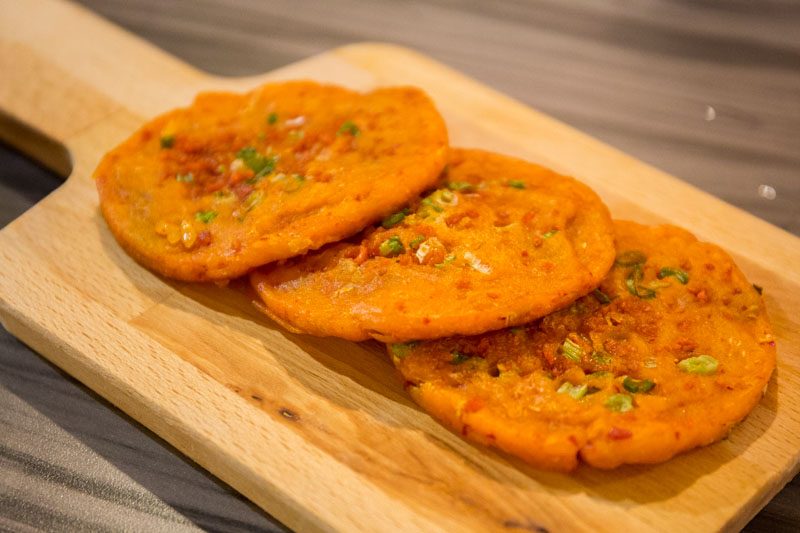 Not done spamming those Korean classics? The Mini Kimchi Bacon Pancake ($9.80 For Three) might be what you’re after. 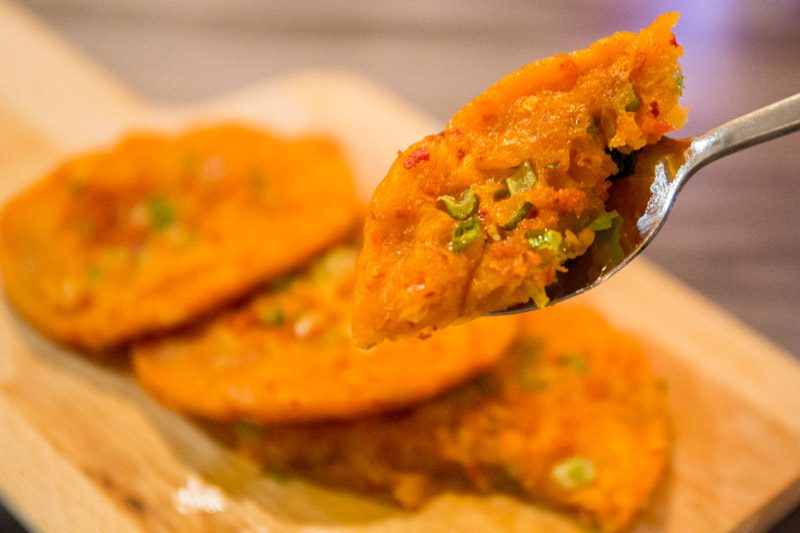 The pancake takes on a red hue from the kimchi, and was fluffy without being too dense or gooey on the inside. Unfortunately, I felt that it could’ve been more generous with the bacon as its taste was underwhelming. K-JU specialises in skewers that any izakaya frequenter would be familiar with. I ordered a bit of everything so that I wouldn’t have a… skewed opinion. 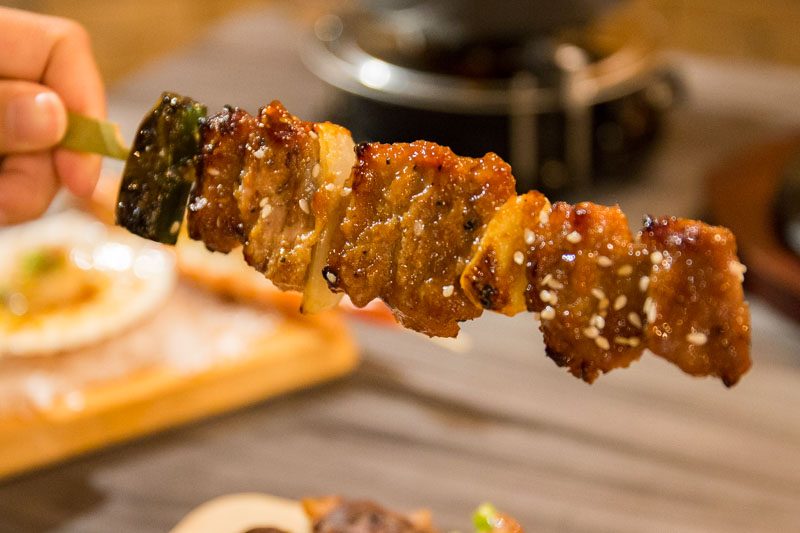 Easily the best skewer on my list was the Korean Chicken Dakkochi ($4.50). These came in huge chunks with vegetables served in between, providing layers of texture.

The chicken was succulent and tender, and perfectly marinated with a sweet, subtly-spicy sauce you’d expect from seasonings used for bulgogi. That said, the sauce was not cloying or overly decadent, so you’ll be craving more than one stick.

You’ll also find some Japanese influences here at K-JU with its use of Kurobuta Pork and Wagyu Beef in its skewers. You’ll find these sought-after meats wrapped around ingredients like Cheese Rice Cakes, Enoki Mushrooms, King Oyster Mushrooms, and Asparagus. 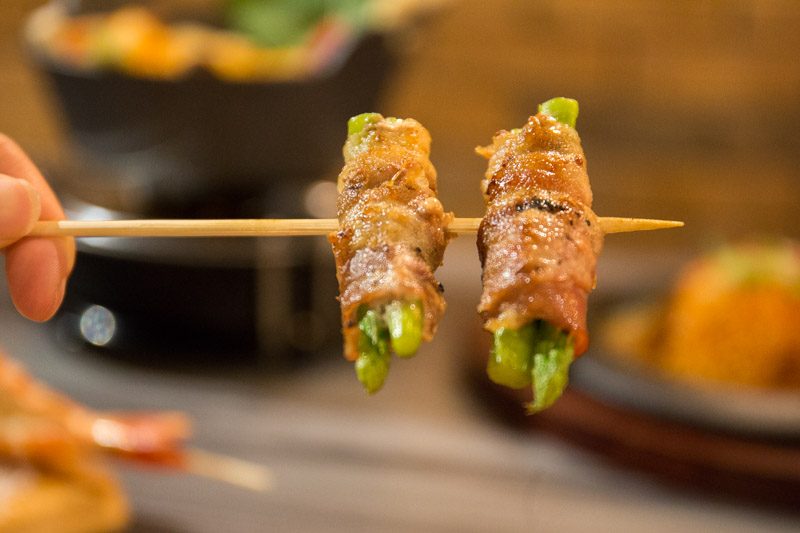 I particularly enjoyed the Kurobuta Pork With Asparagus ($4.50). With the fat of the pork melting away and the crunch of the asparagus in every bite, this was spot-on. 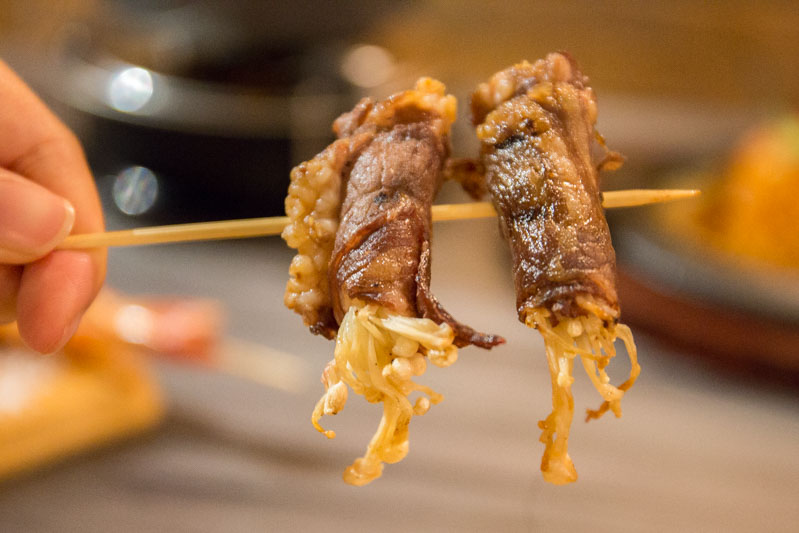 Another skewer that won my approval was the Wagyu Beef With Enoki Mushroom ($4.50), with the beef’s lightly charred taste and delicate texture, and the dense bundle of mushrooms complementing with a juicy, earthy flavour. 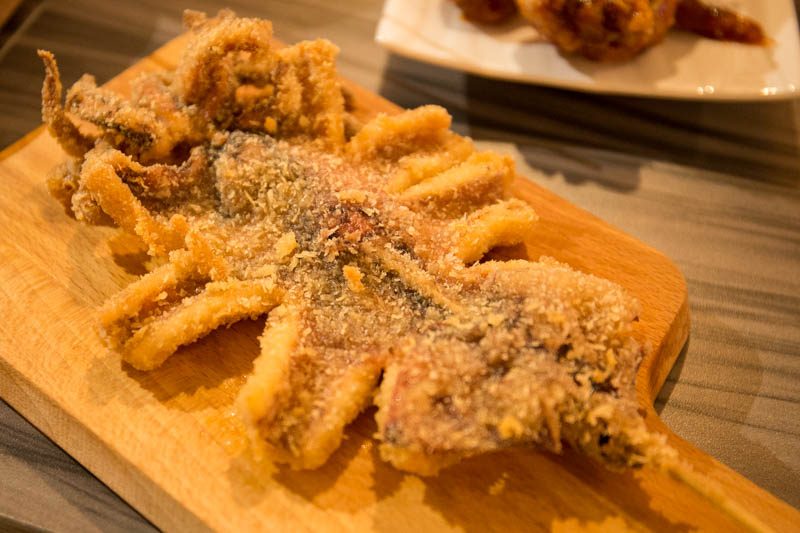 Meats aside, you’ll also find seafood skewers as well. One that stood out was the Fried Squid Seasoned In K-JU Spice & Herb Blend ($8.80).

Yes, it’s a big squid, and the staff have no qualms in cutting it into bite-sized pieces on your request. While I found its texture firm and chewy without being too rubbery, it could’ve done with more seasoning. It was slightly bland, save for the subtly-sweet taste of the breading. 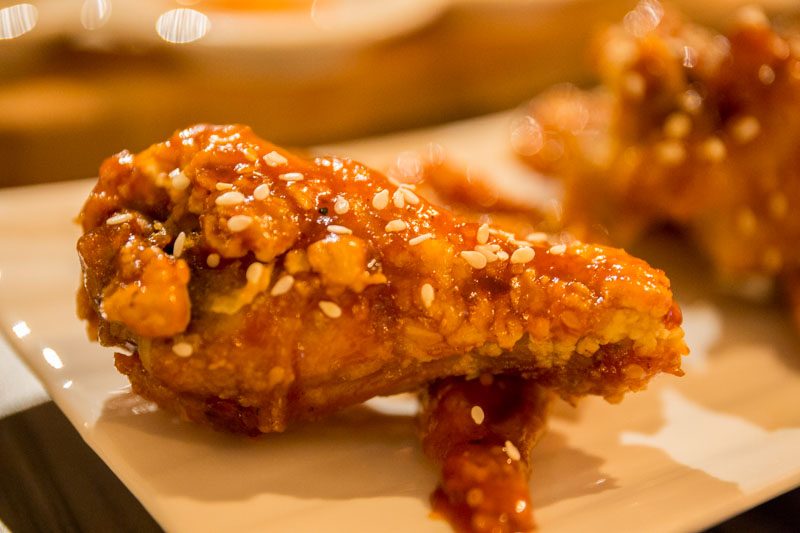 The Spicy K-JU Wings were sticky and sweet, slathered in a sauce that, despite its description, wasn’t too spicy. There was no doubting the addictive flavour of these bad boys; these were proper treats. 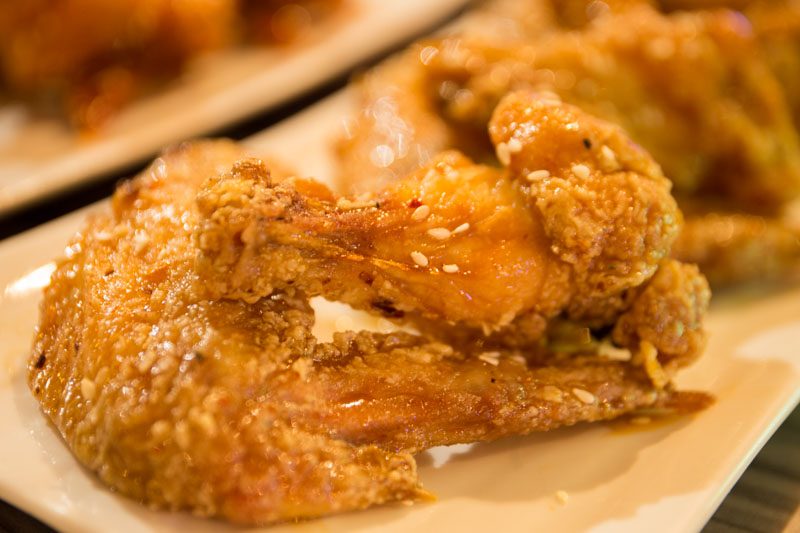 However, the Garlic Soya K-JU Wings paled in comparison in the flavour department, with just a mild taste of garlic and honey. That said, they were fried ’til crispy, which was a win. 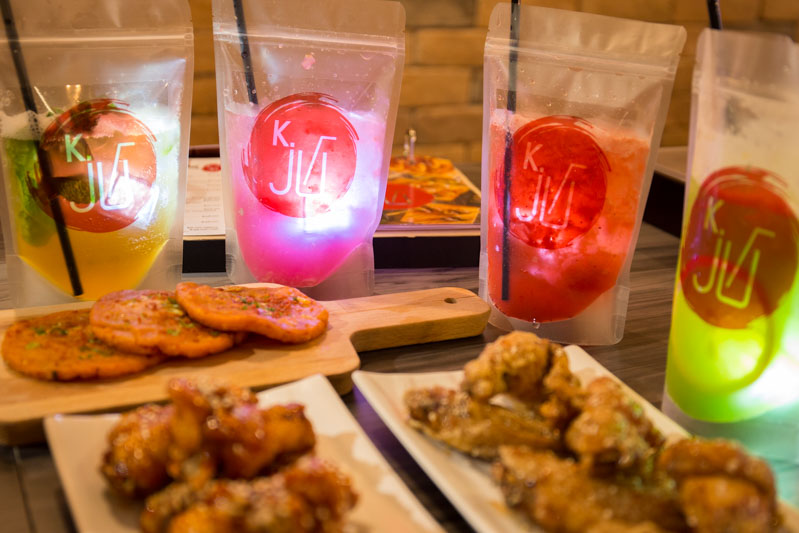 Now let’s get boozy, shall we? In line with Hongdae’s party-friendly vibe, K-JU actually has soju cocktails served in sealable plastic bags filled with ‘LED ice’. Definite conversation-starters, these are refreshing in both presentation and taste. 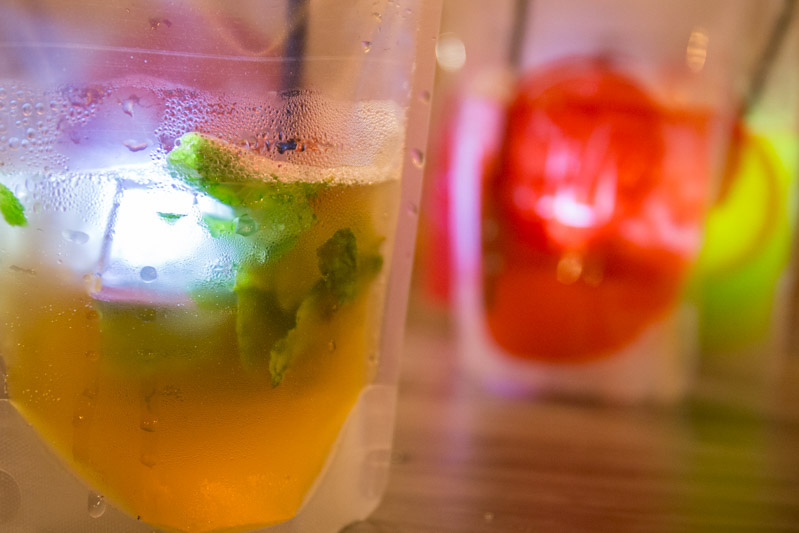 While available in four flavours (each at $14.90) — red tea with mint (Mint-lennial); strawberry, kiwi and Korean yuzu (Belli Berry); orange with kiwi (Orleng Ju); and lychee (Lycheevious)  — my top two were the Mint-lennial and Lycheevious variations.

The former appealed to my affinity to tea-infused cocktails, and the latter was a tropical treat thanks to its potent lychee taste and bits of lychee pulp within. 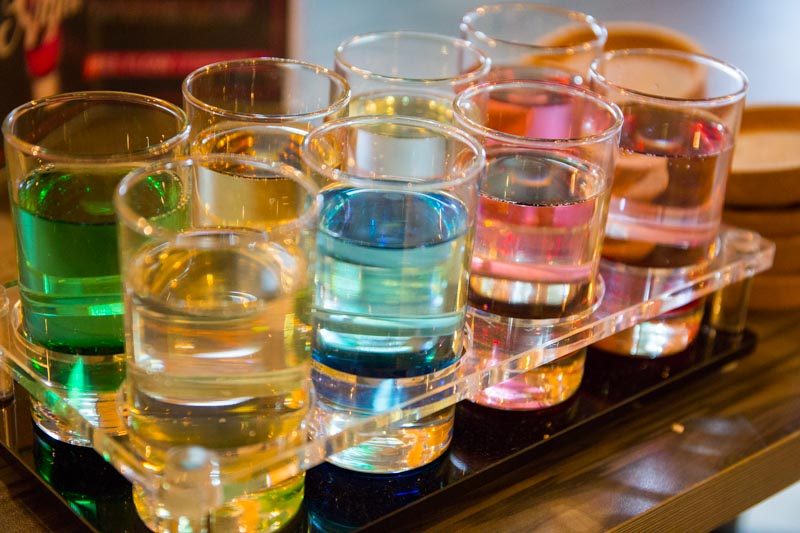 If you’re looking for something a lil’ more hardcore, however, you’ll probably challenge your friends with the rainbow soju shots called Ju Pops ($6 For One, $30 For Set Of Six). Kaleidoscopic, yes. Tame, hardly. 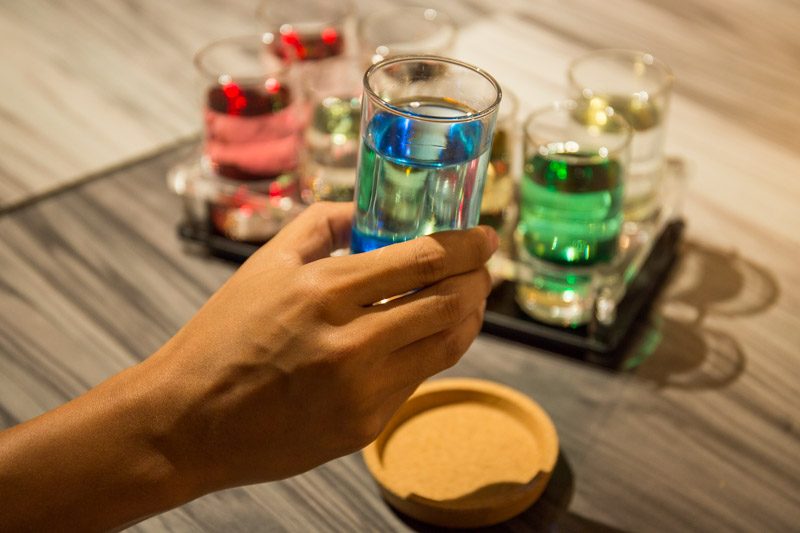 Filled with soda water, these pretty yet potent shots (flavours include green apple, grapefruit, mango, Red Bull, and even chocolate) are much larger than your average shot portion, so take heed when you’re downing these devilish bevvies. 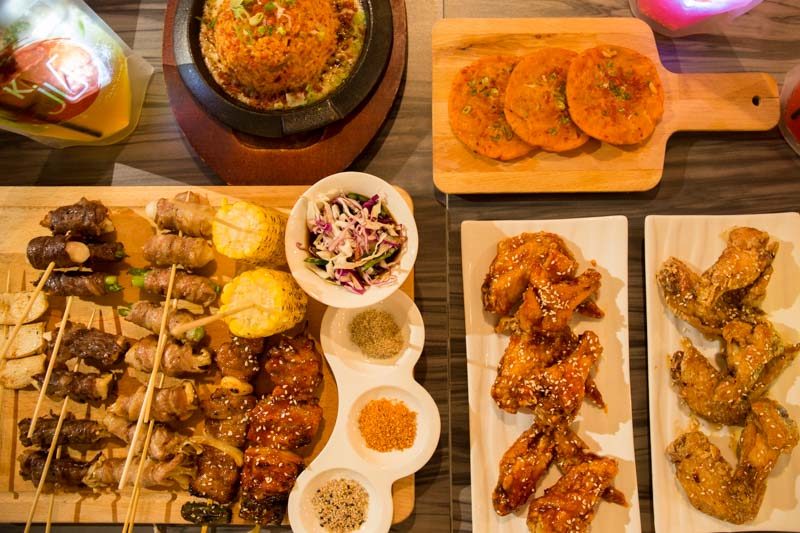 While I haven’t actually been to Hongdae yet, it’s probably ideal that I prepare myself with the helter-skelter of its wild drinking culture before I sink in. You can bet that I’ll be doing my warm-ups at K-JU.