Every individual has their own kind of comfort food. Those who know me would agree that mine would definitely be desserts. There’s always space in my stomach for a sweet treat on any occasion. The only downside would be how they’re inherently unhealthy — often loaded with refined sugars, artificial flavourings, colourings and all that bad stuff.

Hence, when I chanced upon newly-opened Kind Kones located at Forum The Shopping Mall, I had to visit them. Kind Kones pride themselves in serving healthy and vegan ice cream and desserts. Their products are all freshly-made from scratch with natural and chemical-free ingredients. Not only are they unprocessed without any refined sugars, but most of their products are also allergen-sensitive too.

I had the opportunity to speak with Ishpal, the co-founder of Kind Kones. Kind Kones was established with his wife, Serina, as they wanted to provide healthy dessert alternatives for their young daughter. They are very children-friendly, with a dedicated kids’ area filled with activities.

From blackboards with chalks to paper and colouring materials, they have it all. They also have a book stand for them to read, and even conduct book swaps. I loved how aesthetically pleasing the store was, with pastel colours that exuded a welcoming and comforting vibe. As I took a quick glance at the ice cream selection in the display chiller, I was surprised that the flavours were all really innovative. They looked really good as well and I had high expectations of them. 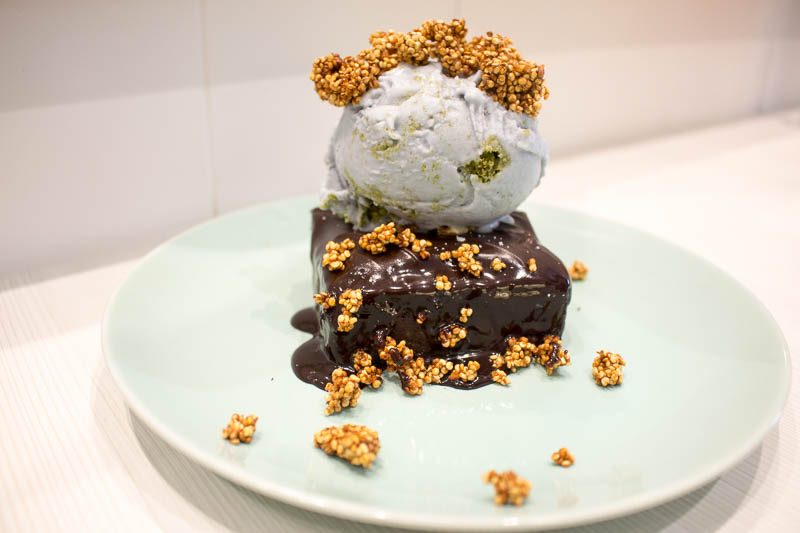 The first item we went for was the Brownie Sundae (S$11.50). It was served with a flourless sweet potato brownie, as well as any choice of ice cream and toppings. We decided to go for the Blue Planet ice cream, topped off with Quinoa Crunch. When it was served, I was in awe at how good it looked. The vibrancy of the contrasting colours was definitely eye-catching, to say the least. I decided to go for the brownie first and as my fork sliced through the brownie, I knew it was gonna be a good one. 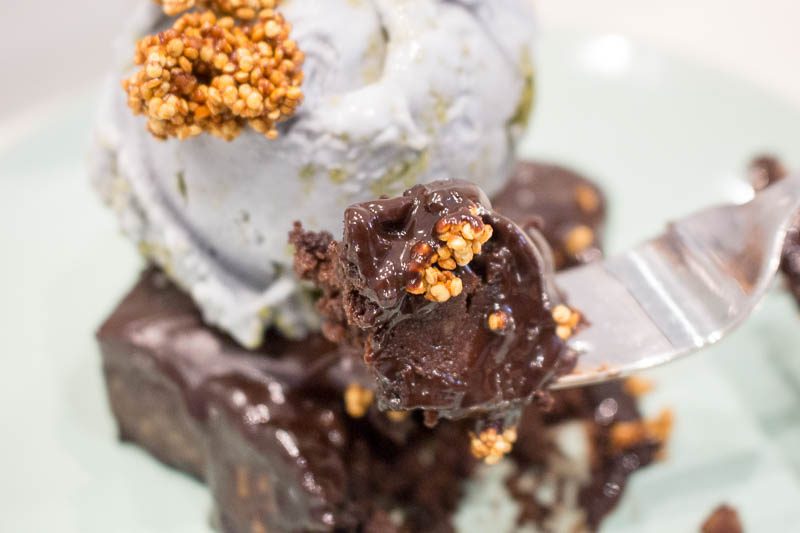 The texture was smooth yet dense, holding its shape well with a clean cut as I sliced into it. Putting it in my mouth, I had to declare it was one of the best brownies I’ve ever had. It was rich, fudgy and chewy. This may be controversial but I’m not a fan of cakey brownies at all.

This was moist and gooey, just the way I like it. Having it topped off with a thick layer of silky melted chocolate made it all the more decadent.

The sweet potato taste was very subtle, although I could taste a hint of it. I didn’t mind it though, as I personally love sweet potatoes. In addition, it gave a nice sweetness and added more depth to the flavour of the brownie. It was also studded with walnuts for a nice textural crunch. 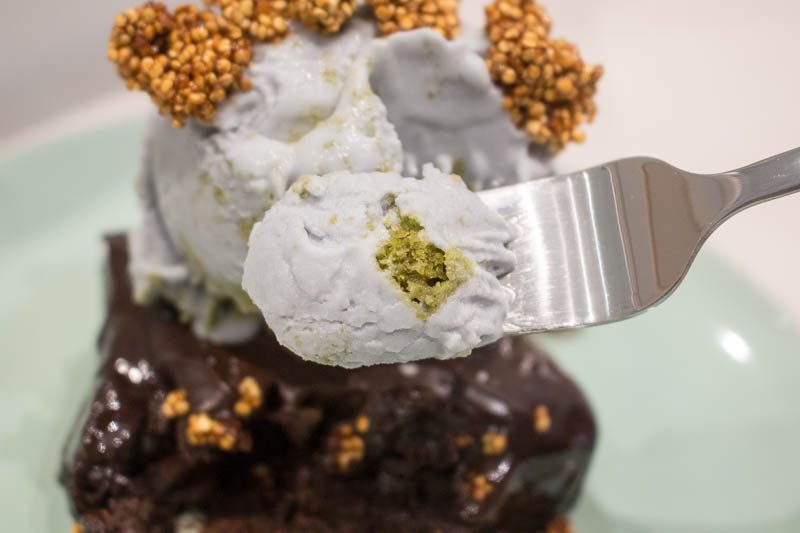 The Blue Planet ice cream that we went for was a cute contrast between a baby blue hue and a vibrant green. Made out of a combination of coconut milk, cashew milk and almond milk, the blue is a result of natural dye, made with butterfly pea flower, and the green stems from the chunks of matcha cake embedded within.

To be very honest, there wasn’t much taste to the blue ice cream. It was light and fragrant, with a hint of vanilla. What I was immensely impressed by was the texture. Made without dairy at all, it was so creamy and flawlessly smooth. I’ve had my fair share of dairy-free ice cream, and I’ve found most of them tend to be slightly gritty due to the nuts involved.

I liked the chunks of fluffy matcha cake, which elevated the texture of the ice cream as it had more bite to it. It also gave a tinge of intense earthiness which complemented the refreshing blue ice cream base. The quinoa crunch was the perfect topping. As quinoa is pretty bland on its own, I liked how they caramelised it with pecans. It rounded up the dessert nicely with a crunchy texture, complete with a pop of sweetness to the ice cream. 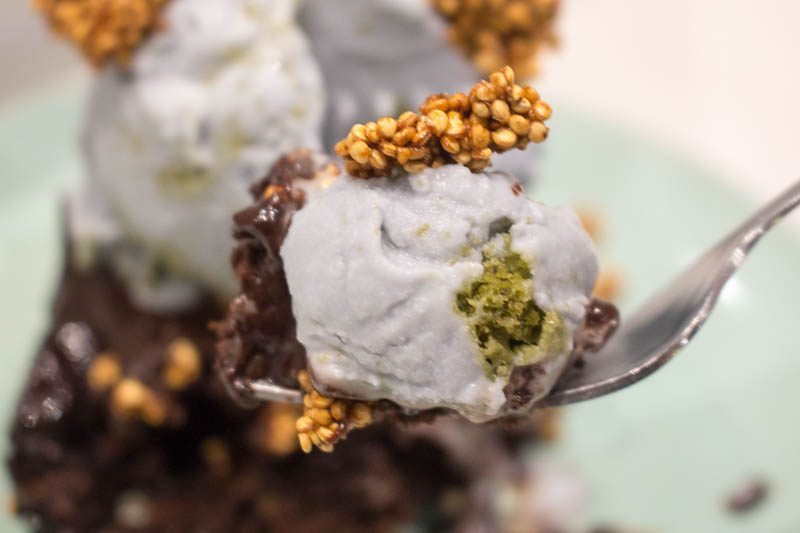 Having all the components in one bite was a perfect combination, especially with the varying textures and flavours. 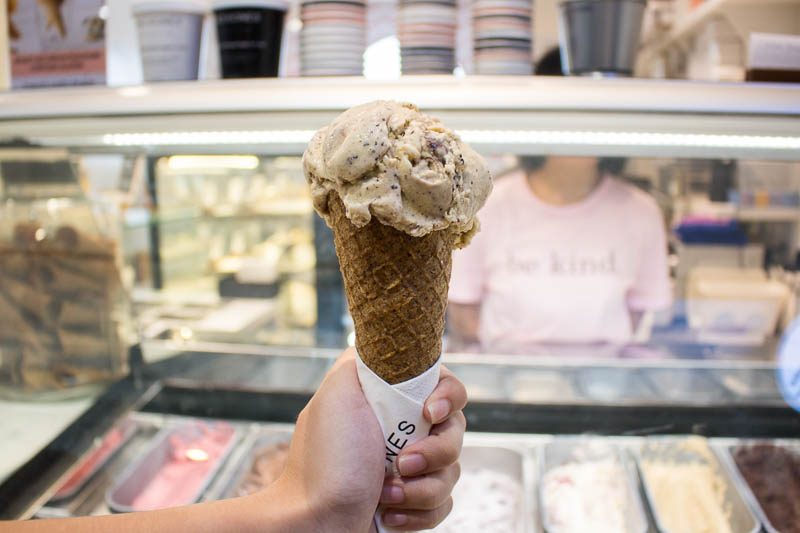 The Brownie Sundae surpassed my expectations and I was looking forward to the next. We decided to go a simple Single Scoop Of Ice Cream (S$4.90 for standard flavour, S$6.90 for premium flavour) in a Homemade Almond Waffle Cone (S$1). We chose Black Forest for this one, which had the same milk combination base with brownie chunks and cherry compote swirled within. Similarly, the creamy ice cream was light, which allowed the richness of the brownies to shine. 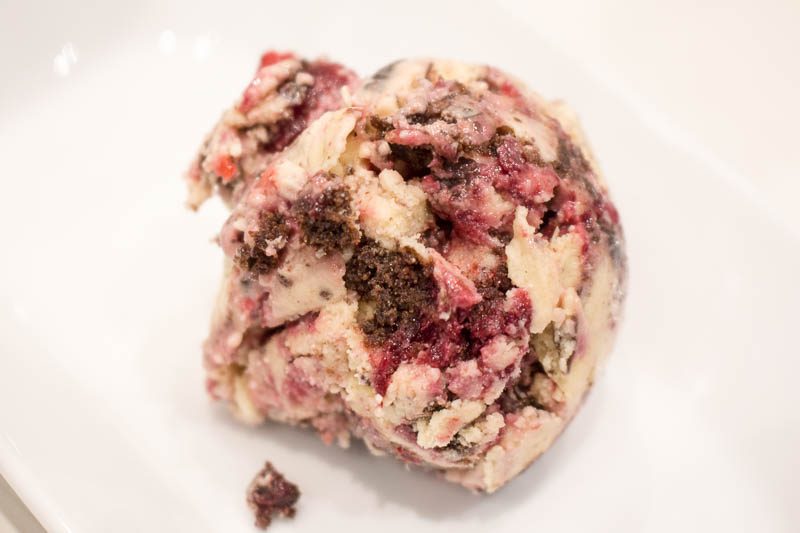 I really enjoyed their in-house cherry compote, which gave it that nice tanginess to prevent it from being jelak. It was a very well-balanced flavour that I foresee myself getting again. 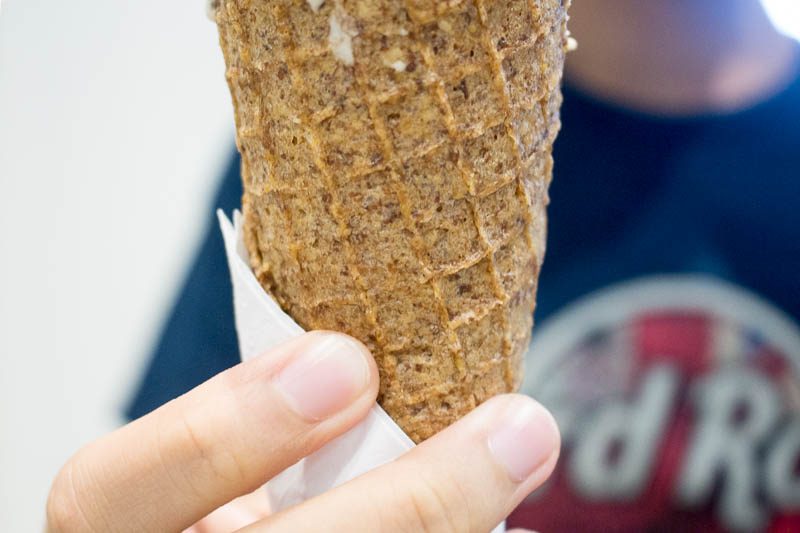 Usually, I don’t get cones as I have experienced getting stale cones or they soften very quickly. However, this was fresh and crisp even after we left it out for quite a while. Made with almond flour, it was fragrant and had a distinct nuttiness to it that I found very addictive.

It reminded me of cereal and even had a chocolate plug at the end, which was a delightful surprise. This cone is also flourless and gluten-free. 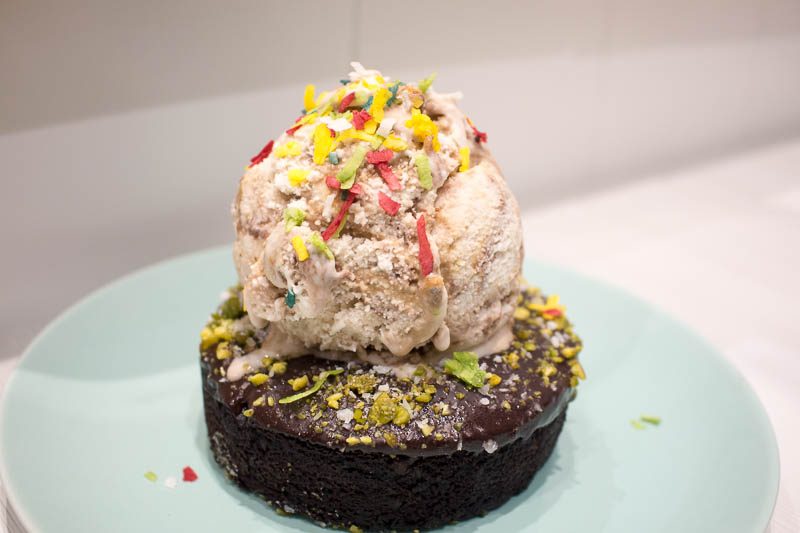 The last combination we decided to go for was a Baked Chocolate Donut (S$3) with a Single Scoop Of Ice Cream (S$4.90 for standard flavour, S$6.90 for premium flavour). This time, we went for the Almond Brittle Fudge. 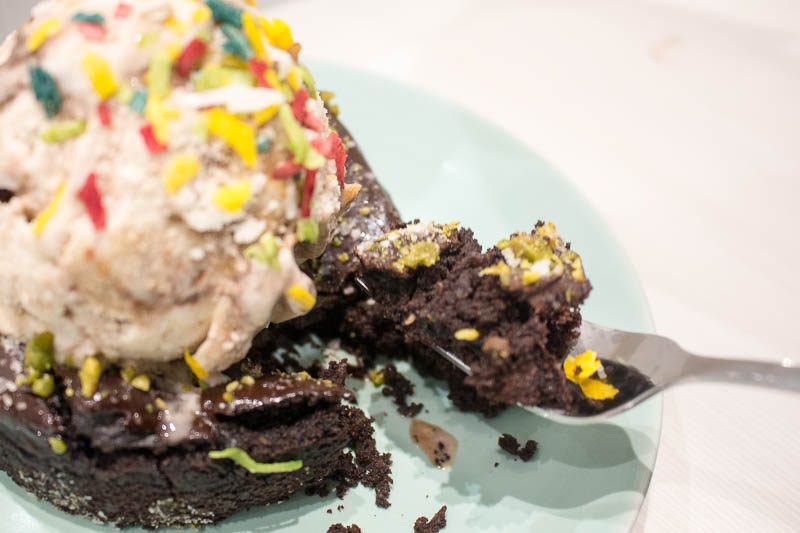 The donut was significantly cakier than the brownie, with a fluffy yet crumbly texture. My only gripe was that it was a tad too dry for my liking. Packed with almonds and flax seeds, this is probably the most nutritious donut you’ll ever have.

I loved the chocolate frosting that was dusted with pistachios for a delicate fresh and nutty note. Topped off with colourful coconut flakes, it not only looked good but tasted great with its light and milky sweet flavour. The ice cream paired well with the donut, as it gave it just the right amount of wetness it needed. It also added texture with its various mix-ins. I liked that this flavour was a tad savoury, with its crunchy brittle made with almonds and chia seeds that helped cleanse the palate. It also had cocoa nibs and dairy-free chocolate chips for a hint of bitterness to add to the depth of flavour.

Kind Kones may just be one of the best ice cream and dessert bars I’ve been to thus far with their delicious offerings. Sometimes after having too much dessert, I get slightly bloated and uncomfortable. I actually still felt good after having three desserts, which I would like to attribute to the quality of the ingredients put into their products.

I believe that as long as people are willing to try this out, the preconceived notions of such foods will be debunked. Vegan and healthy food can taste equally as good! If you are in town and craving some dessert, do come down and give them a try. You will not regret it.