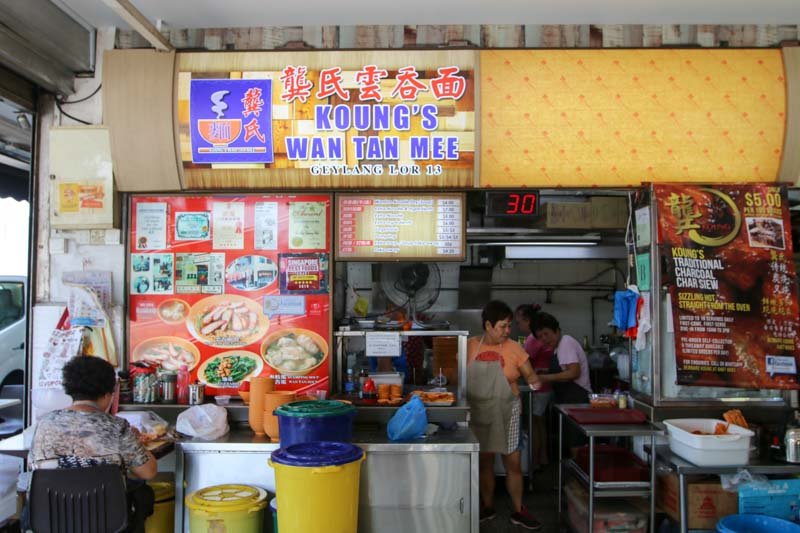 Despite its popularity, Koung’s is still traditional, delicious and affordable, with each bowl of wanton mee going for S$4 only. Plus, its wantons are still handmade and the char siew is lovingly roasted for six hours a day. When I dropped by for lunch, I spotted an auntie wrapping wontons at the front of the stall. I was told that Uncle Koung started out in the wanton mee industry by working for other wanton mee shops when he was young.

Then, he started selling his own wanton mee for just S$0.20 via pushcart, before earning enough money to purchase his own shop. 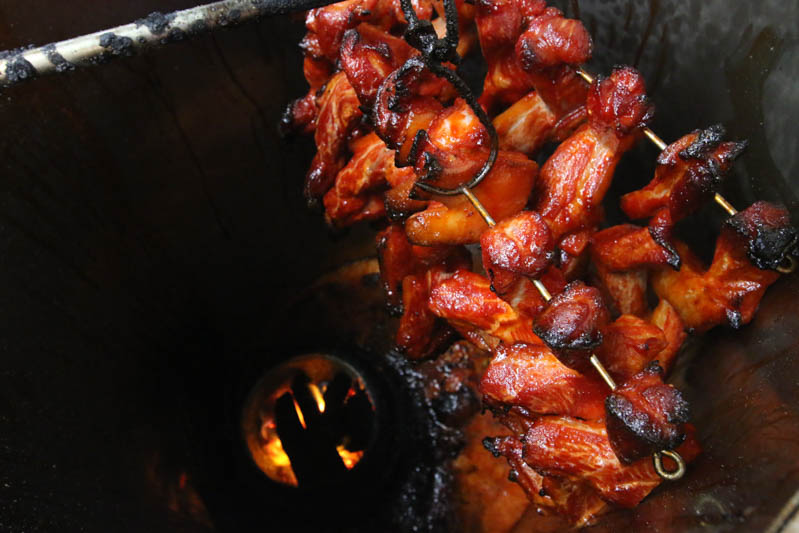 The char siew is hung on a hook and roasted using a charcoal fire for six hours.

Not only does this mean that the char siew is slow-cooked to an extent that the meat is juicy and doesn’t dry out, it also ensures that the savoury marinade seeps into the meat over time. Koung’s only has one main dish on its menu: Wanton Noodle (Dry/Soup) (S$4).

While it doesn’t come with a dark soy sauce-based gravy by default, you can request for it while ordering. 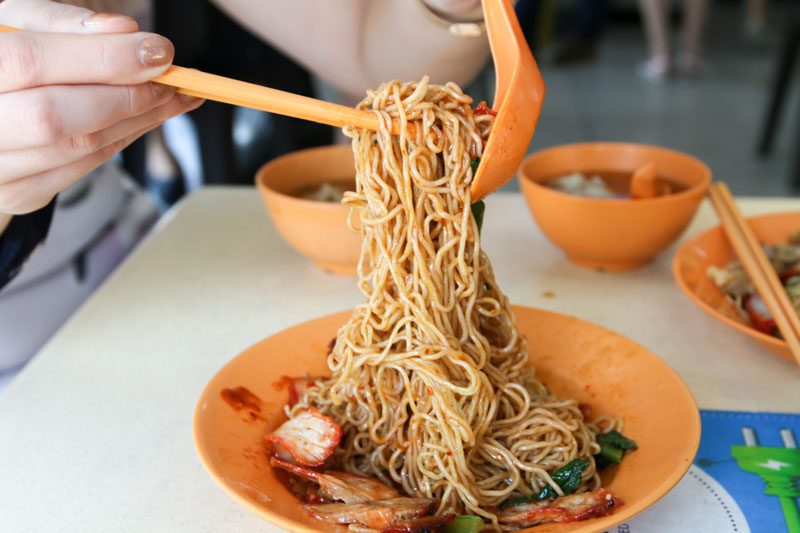 The noodles got a little dry after we took some time to snap some pictures, so we poured in a couple of spoonfuls of soup and started mixing.

I absolutely loved how the glossy chilli sauce coated the egg noodles beautifully. Despite having added soup to the dry noodles, the sauce was still thick and gravy-like, unlike the watery versions from several other stalls. My first impression of the noodles was how fresh the chilli was. It was the type of chilli that leaned more towards a balance between chilli padi and lime, so there was that fragrant spiciness and tanginess. Yet, as I continued to chew, the spiciness mellowed out to become a smoky sweetness.

Despite being left alone for about 10 minutes or so while we took some pictures, the egg noodles weren’t soggy at all. It was delightfully buttery, silky and springy, perfect for slurping. It had just the right amount of bite in it and that characteristic bouncy texture.

My only gripe with the dry wanton mee would be its gravy. When coupled with the buttery egg noodles, it was on the verge of becoming oily, and might be jelak to some people especially towards the end of their meal. 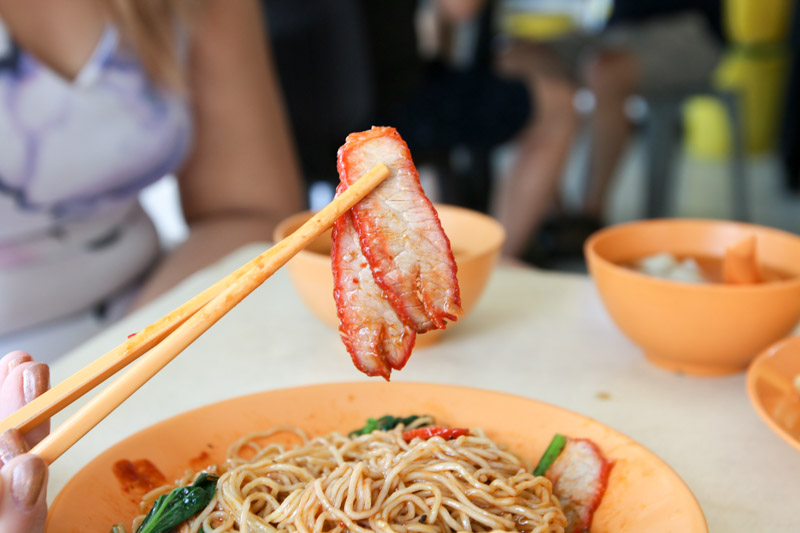 The char siew was one of the best I’ve ever had. It was springy and juicy, and while it wasn’t melt-in-your-mouth worthy, I could definitely tell that it wasn’t dry nor hard to chew.

Flavours-wise, it was definitely sweet to begin with, thanks to its honeyed barbecue-like glaze. However, the more I chewed, the more I could taste the aromatic smokiness from the charcoal. 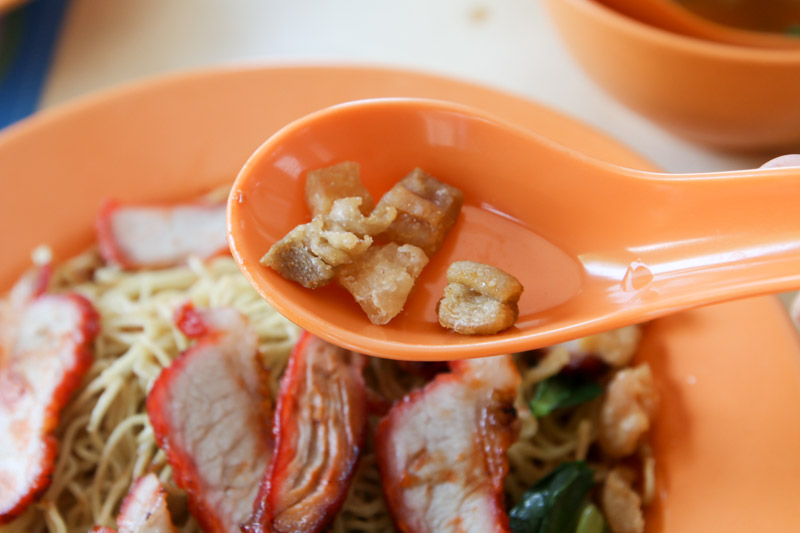 For those who don’t eat lard at all, I feel you. I’m not one to rave over lard, but Koung’s pork lard is of a different level and it’s a definite must-try.

It reminded me of deep-fried potato cubes: fragrant, buttery and smoky without being too overly oily or overpowering. 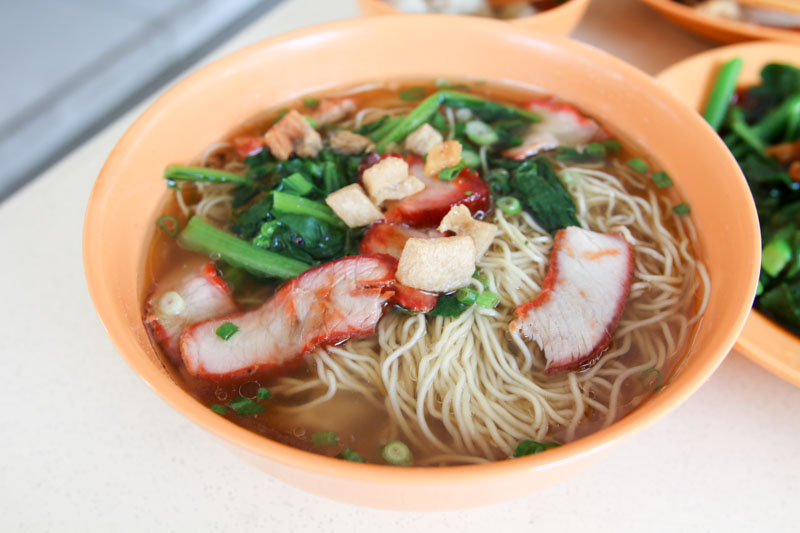 Wondering how Koung’s Wanton Mee (Soup) (S$4) differs from its dry counterpart? You’d be delighted to know that it’s equally delicious, if not more, depending on your own personal preferences when it comes to soup or dry. 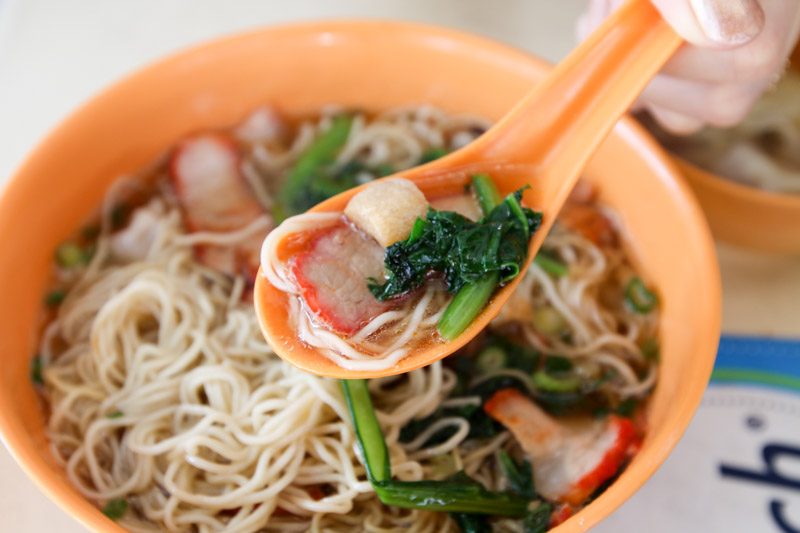 While the noodles were springy and bouncy in the dry version, the noodles here were silkier and softer. Yet, they weren’t soggy, and were delicate and smooth.

The char siew, though steeped in the soup for a good amount of time, was more soft than soggy. and I could still taste that delicious smokiness from the charcoal. 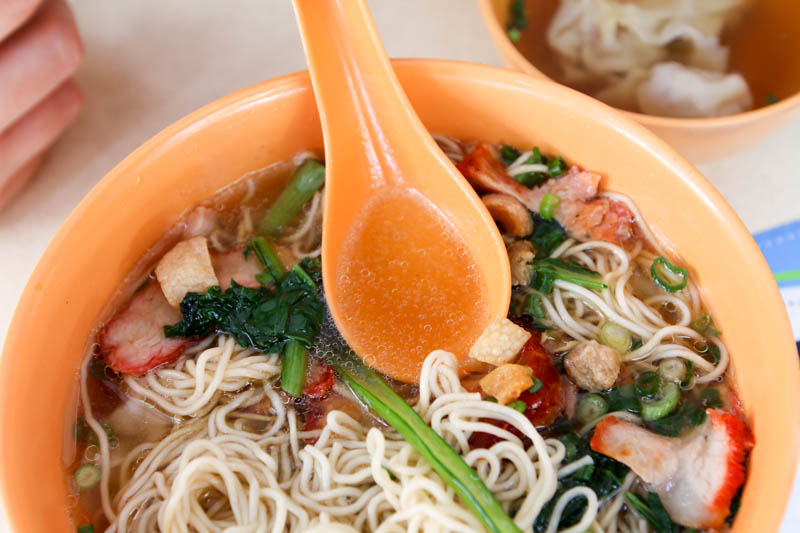 What I really liked about the soup version was how comforting, full-bodied and naturally sweet the soup was. It had a slight peppery aftertaste, which helped cleanse my palate.

It didn’t have that alkaline nor astringent taste, which meant that it had little to no MSG — a huge plus in my books! 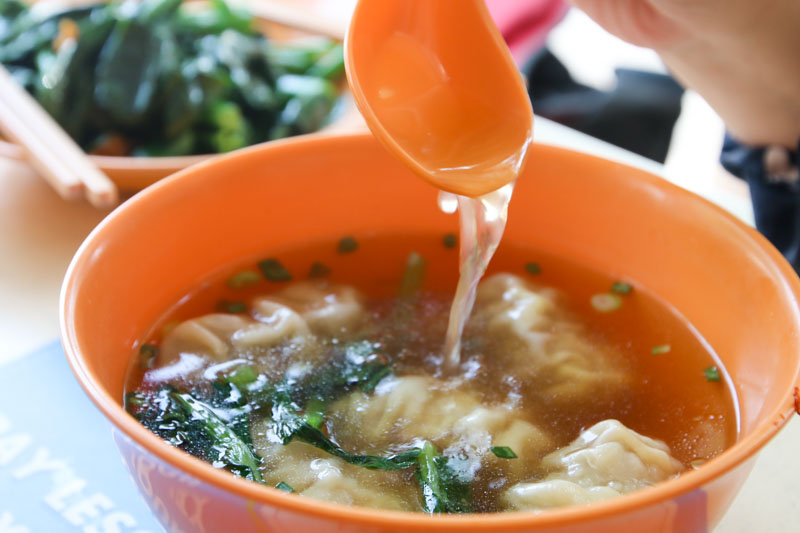 Plus, I was told that a whole bunch of natural ingredients go behind this simple and clear soup.

From pork bones and dried scallops, to flatfish, herbs and other ingredients, the soup is a huge hit with a lot of Uncle Koung’s fans. 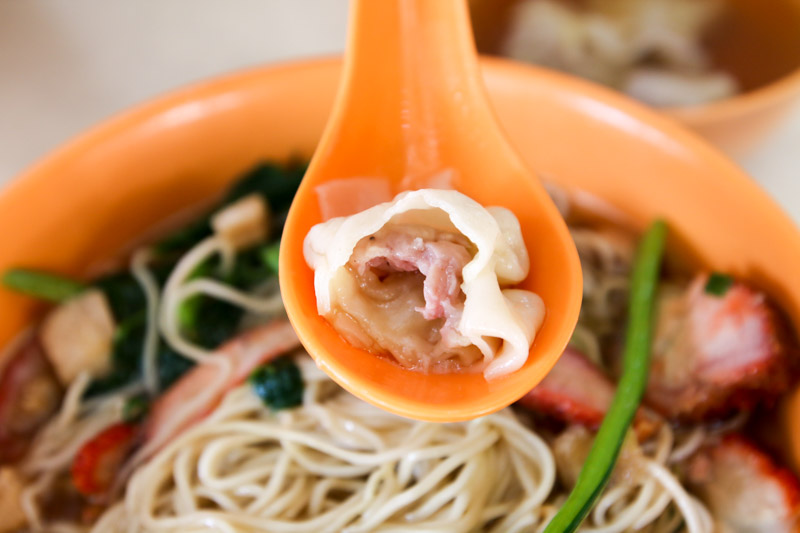 As for the wontons that came with the wanton mee itself, the skin wasn’t too floury or soft and I was pretty impressed to see that it didn’t break off while I was trying to grab it with my chopsticks. I liked its juicy meat filling, but would have liked for the entire wonton to be slightly bigger. 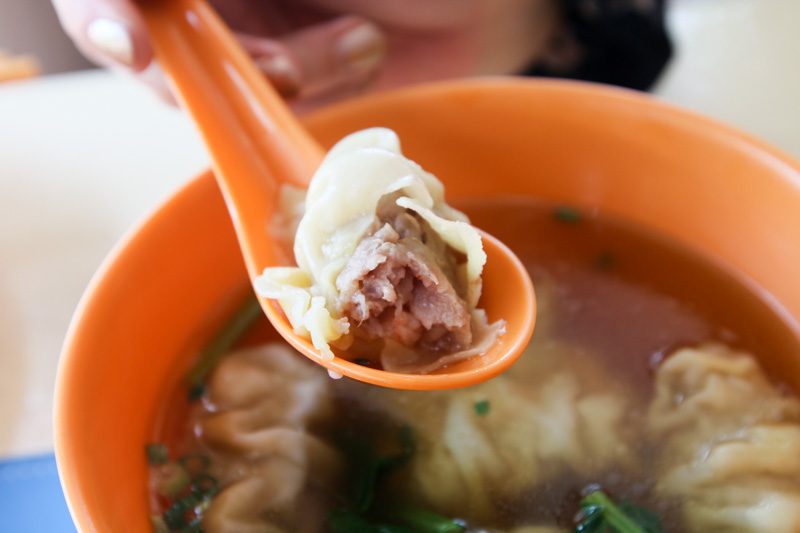 However, the wanton that came with the Dumpling Soup (S$3/S$4/S$5) is a whole new ball game. Each dumpling was impressively huge, with a generous amount of filling that was springy, tender and delicious. 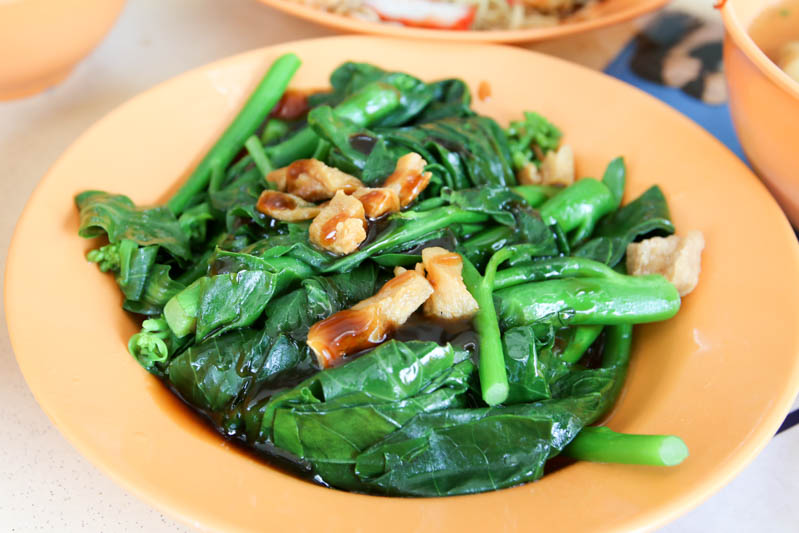 Koung’s only has one vegetable available on its menu , kai lan. Its Vegetable (S$3/S$5) was topped with oyster sauce and a dash of sesame oil, and was crunchy and crisp.

Wanton mee is such a classic dish and some might even say it’s relatively simple in terms of what it’s made up of, but it’s arguably a difficult dish to master.

From the downright delicious noodles to the amount of hard work that goes into each of its components every single day, Koung’s Wan Tan Mee really impressed me. Needless to say, I’m definitely coming back for another plate of slurp-worthy wanton mee.

Previous articleGet A Taste Of The World’s 1st Piranha Ramen Available For 4 Days Only In Japan
Next articleLady Wu: Truffle Seafood Hor Fun & Mala Fried Chicken At This Rooftop Bar In Boat Quay