Hola! Welcome to La Cala! Situated on the first floor of DUO Galleria in Bugis, this Spanish restaurant is in an easily accessible location.

The endless rows of glass panels silently draw you in, tempting you to have a peek into the restaurant. With soft music playing in the background and a gentle wood interior, this has to be one of the most comfortable restaurants I’ve been to, especially with the rustic wood interior. The glass panels surrounding the establishment meant that ample amounts of natural sunlight could illuminate the restaurant.

As I snuggled into my seat, I was introduced to the head chef, who is in charge of bringing us through a gastronomical journey. The first stop on our journey was the Jamon Iberico De Bellota ($26), where a slice of Iberico ham was placed atop lightly toasted bread and topped with chopped chives and olive oil caviar.

As I took a bite, I was amazed at how light and crusty the bread was. The salty Iberico ham was tender, complementing the soft olive oil caviar which gently popped in my mouth and released the aroma of olive oil. Coca De Recapte ($20) is another tapas that comes with a crisp puff pastry, topped with caramelised onion, zucchini, and anchovies. The sweetness from the caramelised onions and the saltiness from the anchovies harmonised perfectly, neither overpowering the other. The crisp puff pastry also gave the Coca De Recapte additional texture. The Patatas Bravas ($12) was a bite-sized delight. The thin layer of lightly fried potato skin was crispy, and it wrapped around the creamy Mediterranean aioli sauce.

This dish was then garnished with some spicy red sauce, giving the Patatas Bravas a slight kick. The moment I popped one of these treats into my mouth, I was hooked on it. Everything just seemed to blend effortlessly together. I loved how the creaminess of the Mediterranean aioli sauce was subdued by the crispy potato skin. 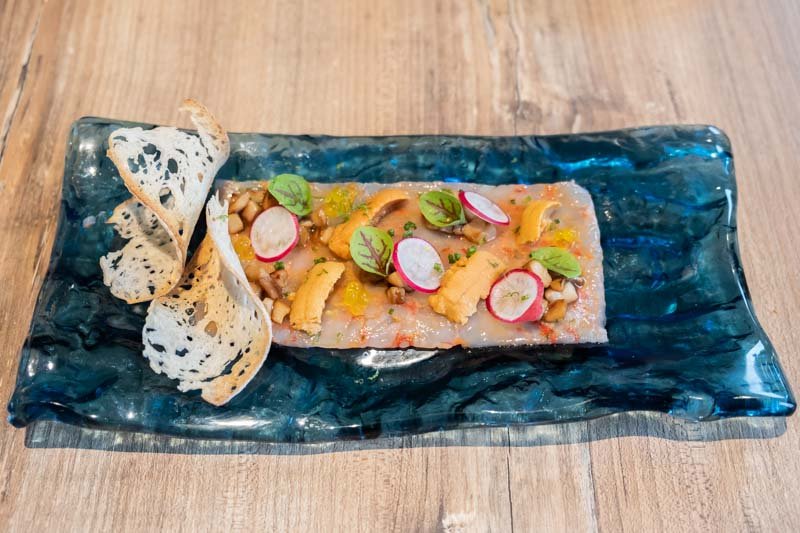 Served on an ocean-blue plate that looked like sea-glass, the Carabinero Prawn Carpaccio with Ceps ($24) was a dish that left me in awe.

A thick layer of deep-sea Mediterranean prawns was served together with generous portions of sea urchin and ceps (also known as porcini mushroom). 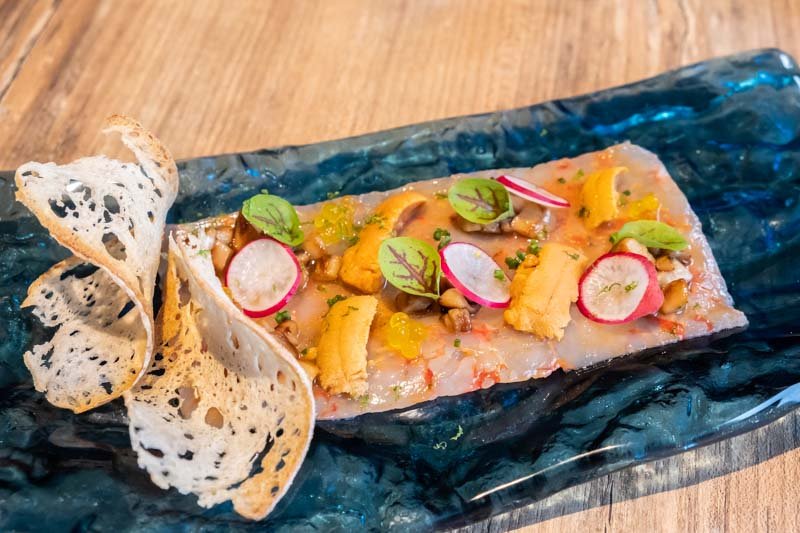 The Carabinero Prawn Carpaccio was sweet and fresh, which went well with the soft and creamy sea urchin. The ceps were lightly roasted, giving off a pleasant earthy flavour.

I would recommend enjoying it together with the biscuit for a contrast in texture, as this dish is rather mushy. After the Canelon De Carne ($14) was served, the chef carefully sliced the black truffle onto the dish, being careful not to damage the $2,000-3,000/kg truffle. Yes, it’s that expensive! The Canelon De Carne had a mixture of beef and pork filling, wrapped in a layer of thin pasta and doused with truffle cream sauce. The filling was soft, with a texture that resembled shredded meat, and the black truffle flavour was actually surprisingly mild. The truffle cream coated the Canelon De Carne nicely, without making the pasta skin soggy. The Lobster Paella ($70) came with an entire Boston lobster, together with carnaroli rice. The carnaroli rice was brilliantly cooked, with a semi-firm crust surrounding the rice. Biting into it revealed its hidden softness, while the thick gravy contained bits of chopped capsicums and seafood. 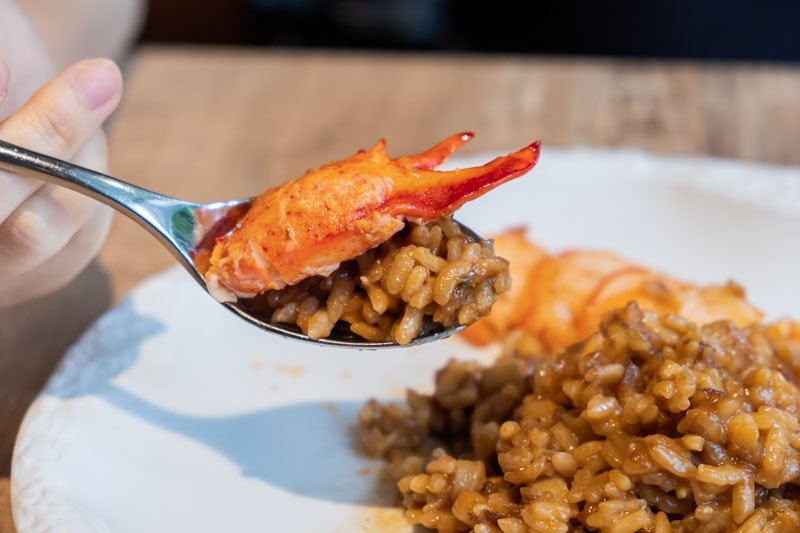 The prominent sweetness of the fresh lobster made me wipe my plate clean of any trace of lobster. It was just that good! 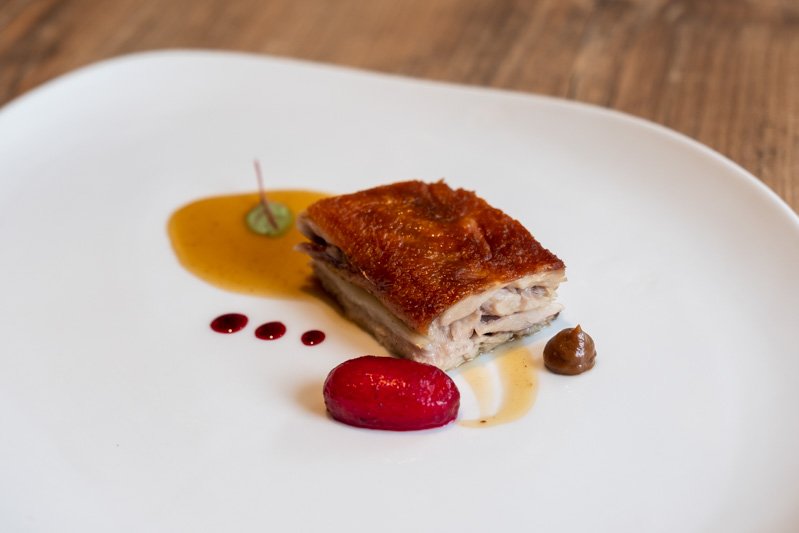 The Crispy Suckling Pig ($35) was probably one of the best I’ve ever eaten. A small dollop of black garlic was placed beside the boneless Spanish suckling pig, and the dish was accompanied with a chunk of melon infused with beetroot. 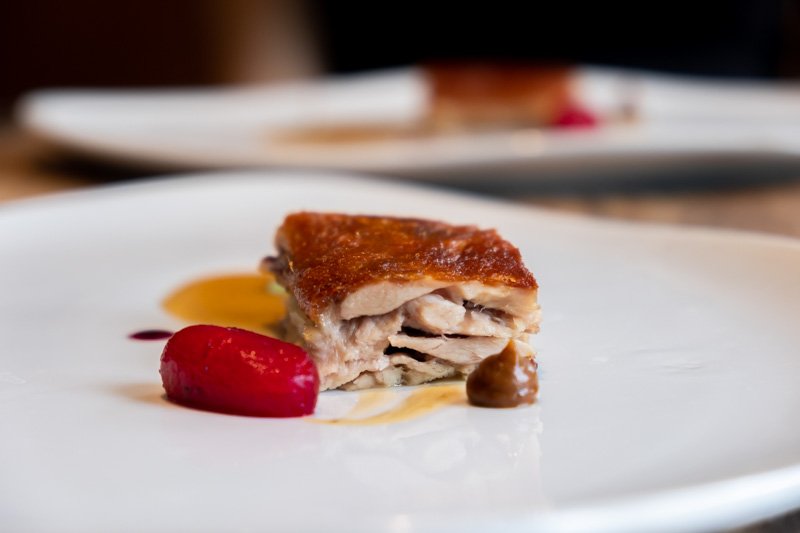 The crispy skin simply sang to my senses, and the juice oozed out with every bite, tantalising my taste buds. This is one dish I will probably never get sick of eating. To end off the dining experience, the refreshing Lemon And Cava ($12) hit the spot. Surprisingly, it wasn’t as sour as I thought it would be. The ice was sweetened by the cava, which countered the tartness of the lemon sorbet and the lemon cream. Have it together with the bread pieces in order to add a different texture to the dessert.

Dining at La Cala was a delightful and unforgettable experience. The excellent tapas, the fantastic mains, and the refreshing dessert, all added up to a great meal. Head down to La Cala to try it for yourself!