If there’s one thing Singaporeans can never agree on, it’s the issue of which hawker dish is the best. Everyone has their favourite dish, and a must-try stall they always head to. 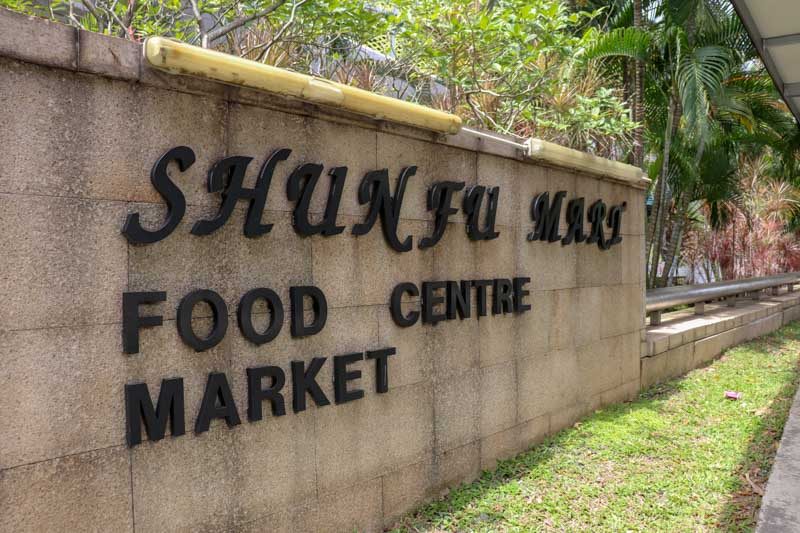 For me, a warm and hearty plate of char kway teow always hits the spot. Imagine my delight when I found Lai Heng Fried Kuay Teow & Cooked Food 来兴炒果条 • 熟食! Located in Shunfu Mart Food Centre Market, they serve up char kway teow with a twist. 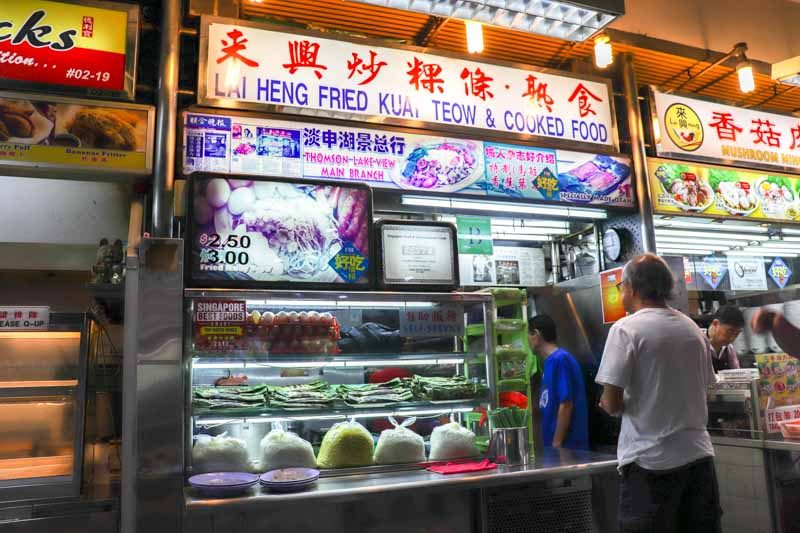 At noon, there’s usually a snaking line of residents and office workers, all flocking to the stall for a hearty char kway teow lunch.

Being typical Singaporeans, we decided to join the snaking line. 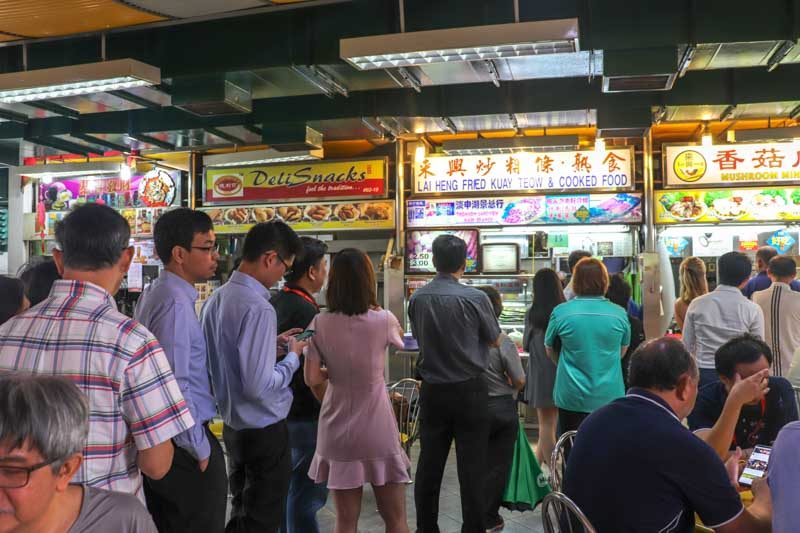 We were expecting the wait to be long, but it wasn’t, to our surprise. Plates of noodles were dished out quickly, as they were stir-fried in batches. 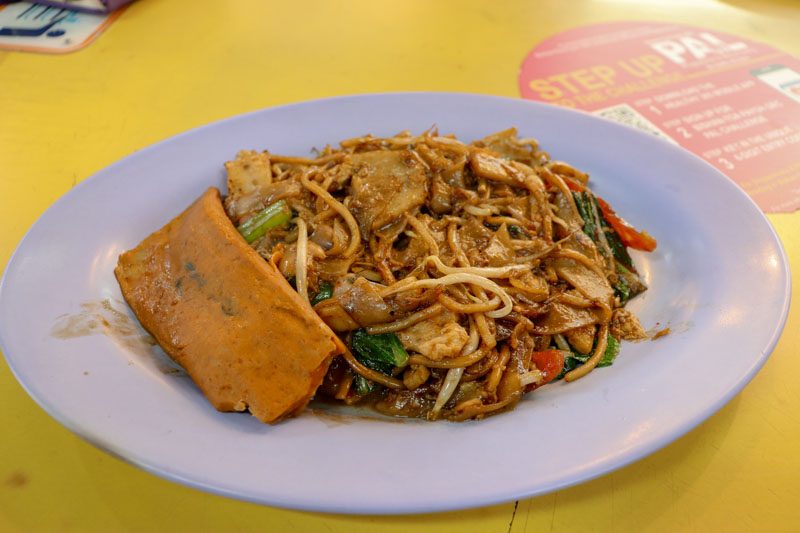 This glistening plate of Char Kway Teow (S$2.50 for small, S$3 for large) had us raving about it as soon as we laid eyes on it. 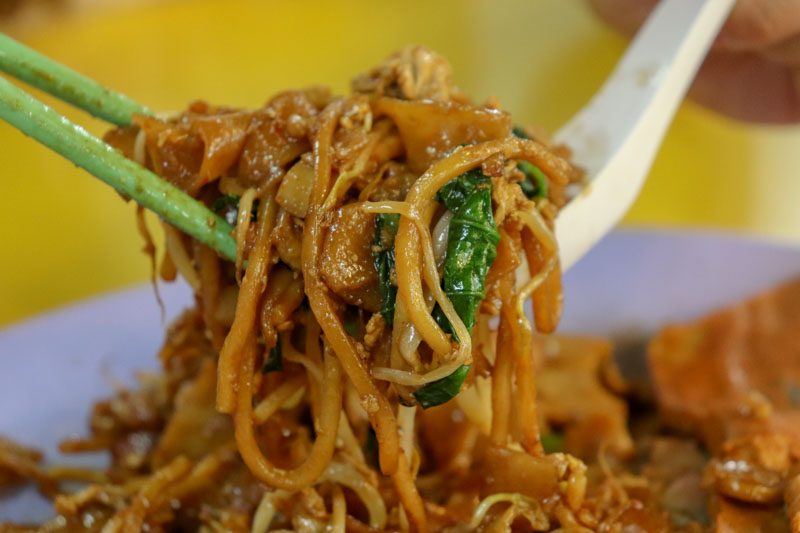 Served up straight from the wok, the fragrant plate of char kway teow was still steaming when we received it. With the irresistible aroma of dark soy sauce wafting from the plate, we couldn’t wait to dig in. I liked that this plate of char kway teow came with generous portions of ingredients.

Chewy rectangular slices of fishcake accompanied beansprouts and leafy greens which provided the dish with an occasional crunch. 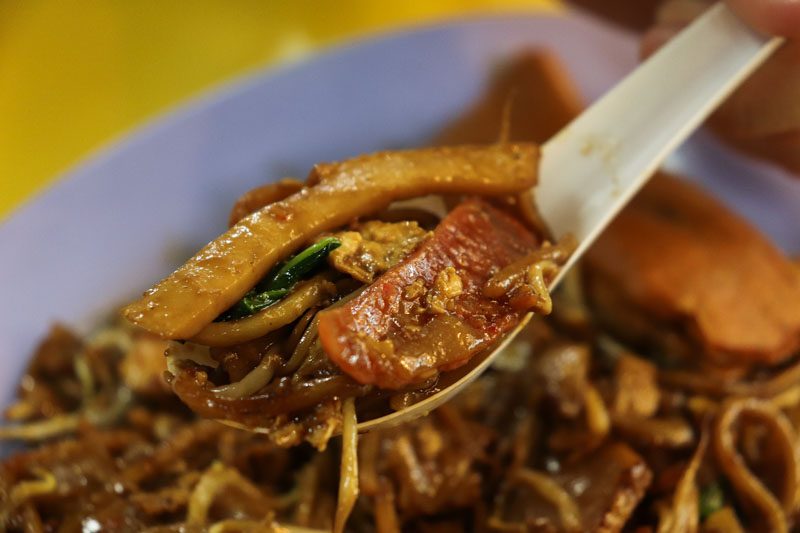 For me, lap cheong is a crucial component in a good plate of char kway teow. To my delight, they didn’t skimp on the lap cheong (Chinese sausage) at Lai Heng.

Each mouthful was full of sinfully juicy and sweet flavours, and I just couldn’t get enough. And let’s not forget about the hum (cockles), another important ingredient in char kway teow.

Lai Heng gets their plump and juicy cockles from Malaysia daily. This means that only the freshest ingredients go into every plate of char kway teow. 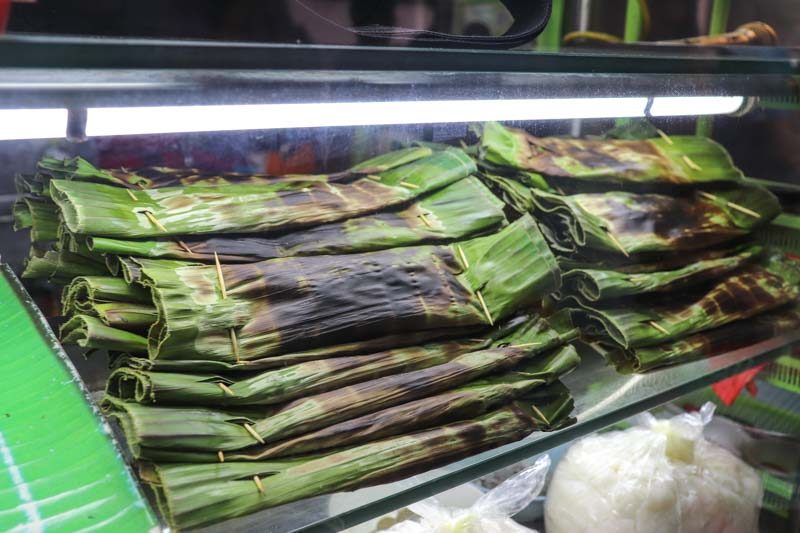 For only S$1 per piece, you can zhng your plate of char kway teow with their Specially Made Otah wrapped in banana leaves. 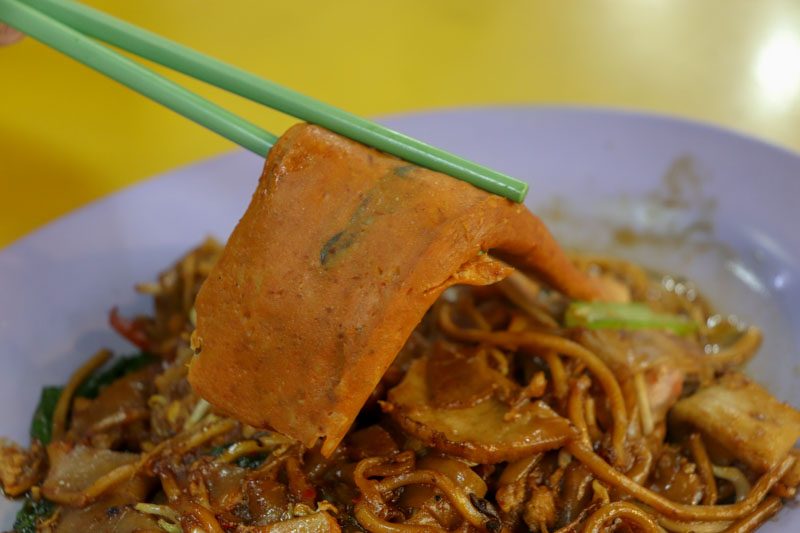 Made with fish paste, the otah was soft and easily broken apart with a touch. I liked that it didn’t taste starchy, and in fact dissolved very swiftly in my mouth after chewing for a short while.

The otah also had a mild kick of spice, complementing the noodles really well. 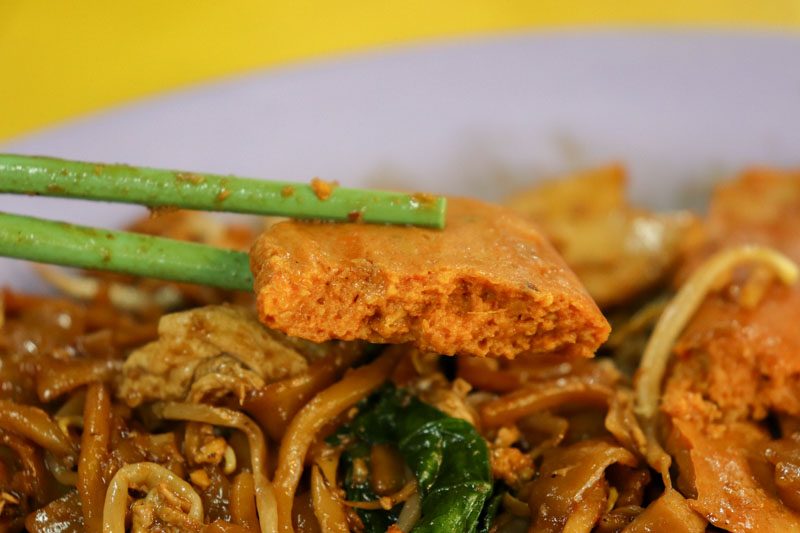 Since I’ve never come across other char kway teow stalls with this peculiar pairing, I had to ask the owner’s wife about it.

However, they actually didn’t have a particular reason for pairing their char kway teow with otahs.

Back when they started, they simply wanted to sell otahs as another source of revenue. Customers soon realised that otah and char kway teow went really well together, so the stall continued selling them. 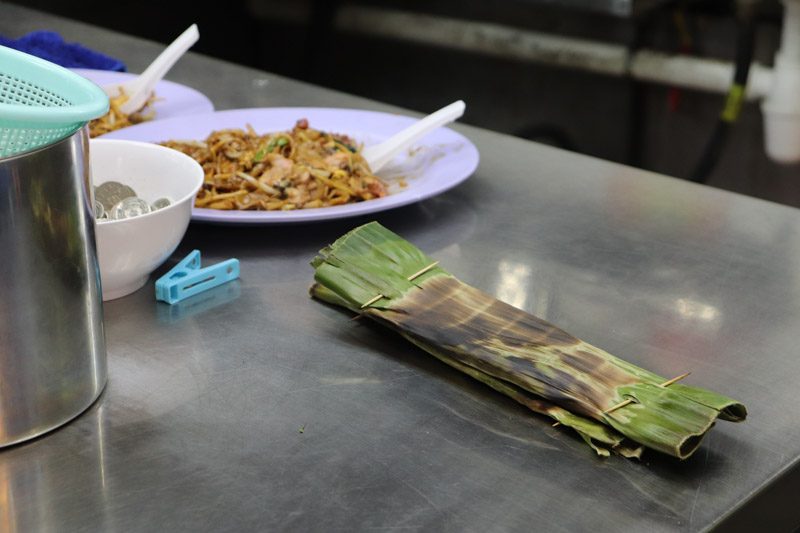 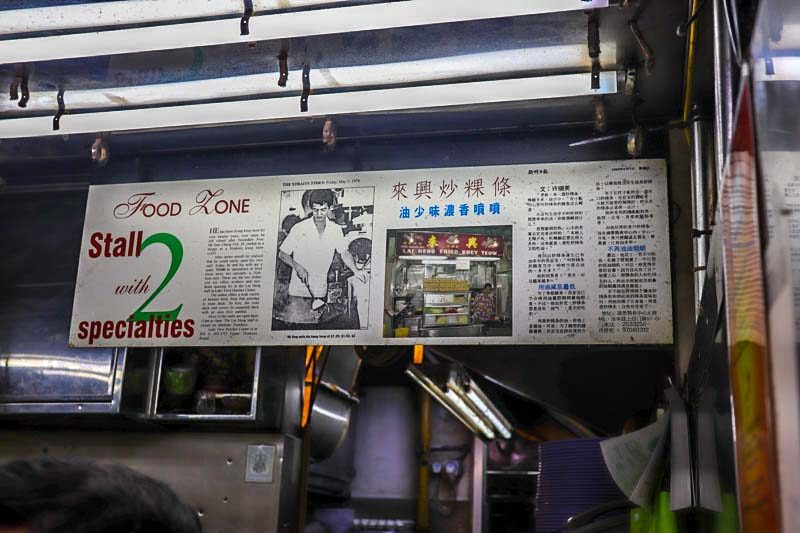 According to his wife, the owner Mr Saw has been frying noodles for more than 40 years, way before they even got married. At Shunfu, she handles the main bulk of the cooking, while their son actually takes charge of their other outlet at Buangkok. 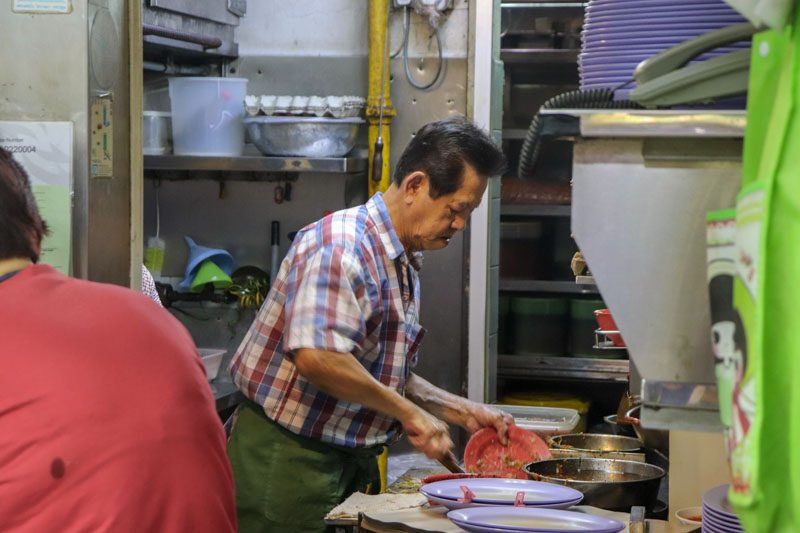 Mr Saw goes around his two stalls every day to help out with the cooking. In the afternoons, he helps out at Shunfu, and in the evenings, he’s at Buangkok. Luckily, we caught him at Shunfu in the afternoon and got a plate of char kway teow cooked by him.

So if you want your plate of char kway teow to be prepared by the master himself, take note! 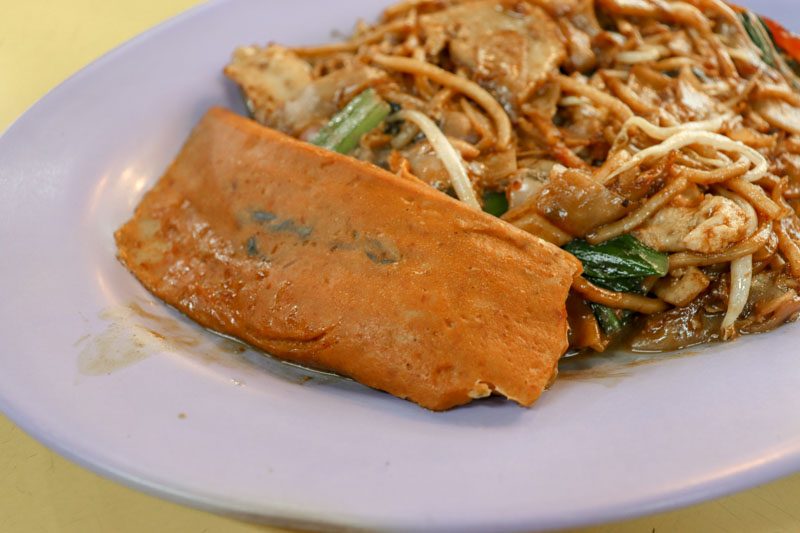 While their fantastic char kway teow never fails to impress me, it’s the unbelievable otah pairing that seals the deal.