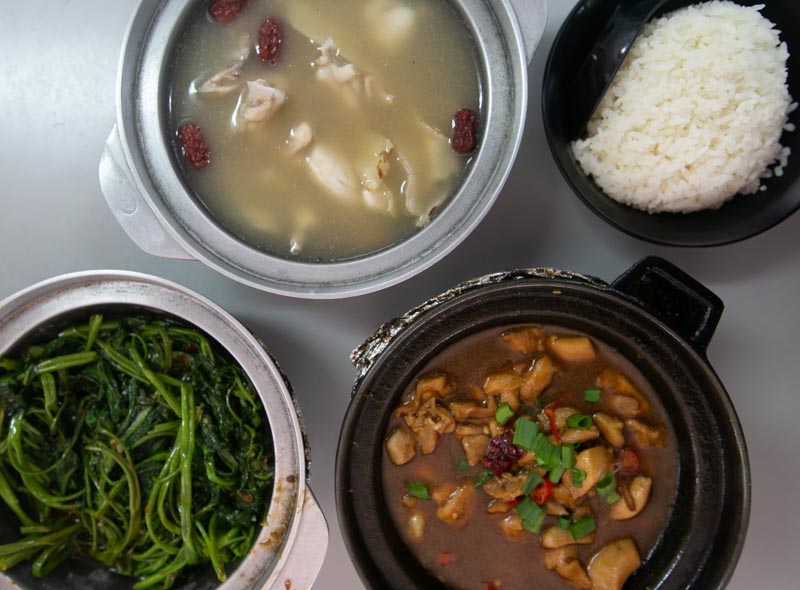 With school being just a stone’s throw away from Nex in Serangoon, the sight of the mall being flooded with students is definitely not uncommon. The initial appeal of numerous student meals wears off eventually and the #firstworldproblem of having “nothing” to eat arises.

Naturally, we were excited to discover this hidden gem Lau Wang Claypot Delights. Located within a five-minute walk from Nex nestled under an HDB flat, Lau Wang has actually been around for over 30 years with a variety of 16 claypot dishes on their menu to choose from! 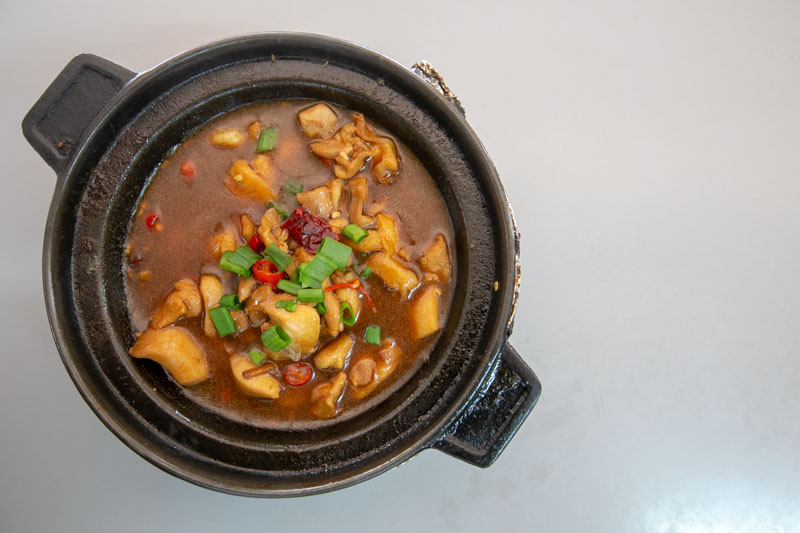 My go-to item has always been their signature Claypot Sesame Chicken which comes in two sizes, Small (S$5.50) and Large (S$7.80). You have the option to have it cooked with chilli as well, which we went for. 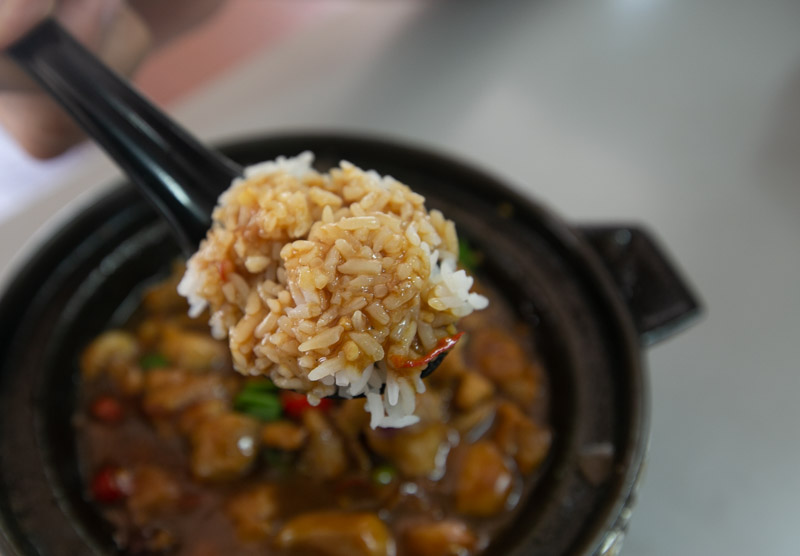 We definitely recommend having your claypot chicken with a side of Rice (S$0.50) to balance out the savoury chicken dish. Even though I always opt for the Small portion when I’m having it by myself, there always seems to be more than enough to be shared between two.

Trust me when I say it’s a moreish dish; I’ve been returning to the stall ever since. Piping hot and sometimes still bubbling when it’s served, having just rice with the sesame chicken sauce suffices. 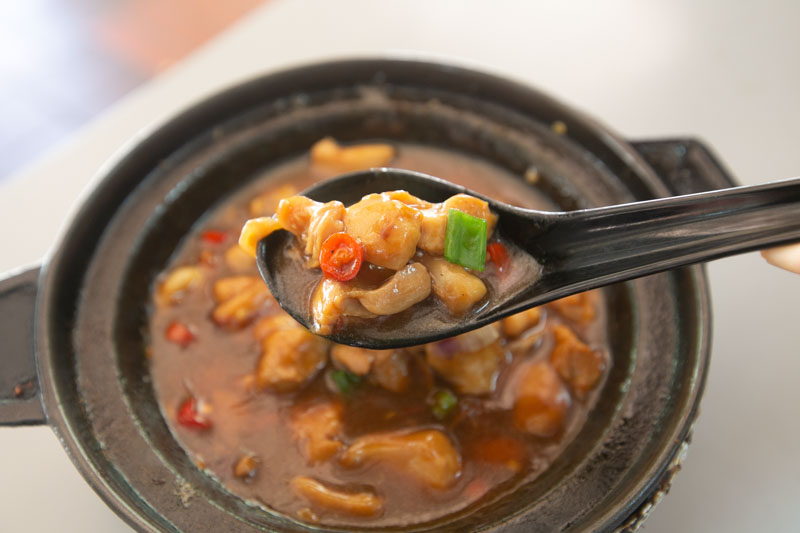 The bite-sized chicken chunks are extremely tender and flavourful, having absorbed the sauce.

Don’t be too intimidated by the bright red chilli padi and dried chilli you find; as long as you don’t bite into them, the spice level remains pretty mild.

Having had both the spicy and non-spicy versions before, we definitely recommend having it spicy for an extra kick. While the claypot chicken is their signature dish, their menu purveys several variations of herbal soups, including Chicken Herbal Soup (S$6.20 for small, S$8.80 for large), Sliced Fish Herbal Soup and Liver & Kidney Herbal Soup, all for the same price.

We went for something pricier, their Frog Leg Herbal Soup (S$8.80 for one). You could opt for two or three frogs at S$16 and S$21 respectively.

I suppose frog meat is one of those ingredients considered an exotic delicacy to those who cannot fathom why one would enjoy feasting on the slimy creature. Contrary to popular belief, frog meat isn’t in the least slimy at all. For one, the skin is thoroughly removed when served. If you’ve never had it before, frog meat tasting like chicken is definitely a more accurate description.

Actually, the frog being served in soup did not really have much taste. Rather, it was like chicken meat without a marinade, but slightly chewier in texture. The soup is a hearty herbal soup filled with a variety of Chinese herbs, with the addition of red dates and goji berries giving the soup an unmistakable sweetness. I’m usually not a fan of water spinach, or colloquially known as kang kong, depending on how it’s prepared. The fibrous texture of old kang kong can really be too tough to bite through. 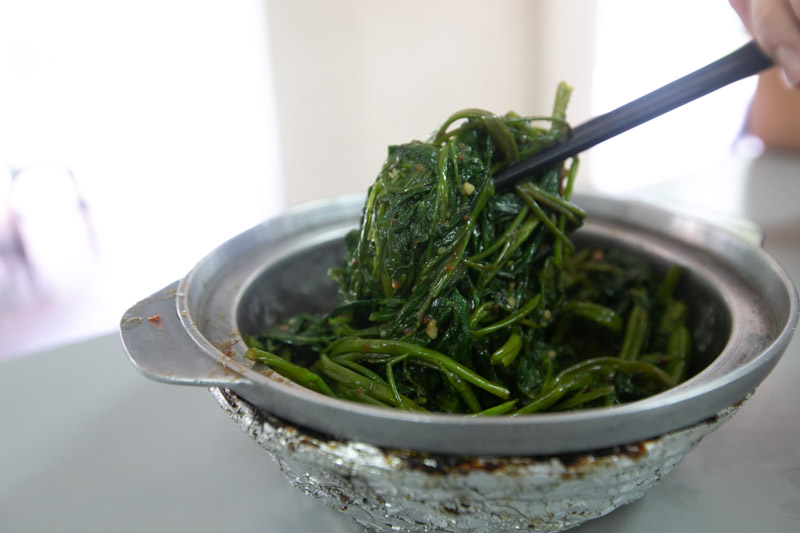 Lau Wang’s Sambal Kang Kong (S$5.20) is quite an exception. Fried with sambal chilli and garlic, the vegetable dish is exceptionally fragrant. More importantly, while some variations tend to be drenched in oil, their kang kong retains a good pleasant crunch as opposed to being soggy.

As a returning customer, I’d also recommend their Homemade Ngoh Hiang (S$5.20 for two rolls) as a side dish. A Teochew delight, those who enjoy it would know those good ones are hard to come by. Homemade and deep-fried in-house, it’s definitely a crowd-pleaser.

Their second outlet opened just at the end of last year in Punggol, and I have to admit that after patronising both outlets multiple times, there’s a personal preference towards the original Serangoon stall mainly because of its consistency.

Nothing too major, but I would sometimes find chicken chunks that are a little tough in the mix at the Punggol outlet which hasn’t occurred at Serangoon yet.

Both outlets are always full-house during meal times, so be prepared to queue if you’re heading down! Thankfully, they’ve also engaged in food delivery services so if you’re not one to queue, you don’t have to.