Porridge has been a go-to dish for me recently with the colder, rainy weather in Singapore. Sipping on bubbling hot porridge just warms the heart and make these gloomier days a lot better. If you’re looking to treat yourself, why not go for lobster porridge?

That being said, lobster porridge wouldn’t be a daily affair since lobsters are pretty expensive in Singapore.

But if you ever want to pamper yourself, here are eight lobster porridge places you should give a shot.

Tucked away alongMaude Road, Wan He Lou pops up between other shophouses. They’re famous for their Lobster Porridge (S$58++/whole lobster, S$35.90++/ half lobster).

It came in a large claypot with three halves of a lobster and topped with chives and strings of fried ginger. They serve their lobster porridge Teochew-style, which means that each grain of rice was still distinct and not too mushy.

The strings of ginger gave a slight crunch in every bite and helped to mask the fishiness of the lobster.

However, I felt that there was too much ginger which overpowered the delicate flavours of the lobster. Furthermore, for the price, I thought that the size of the lobster could be much bigger. 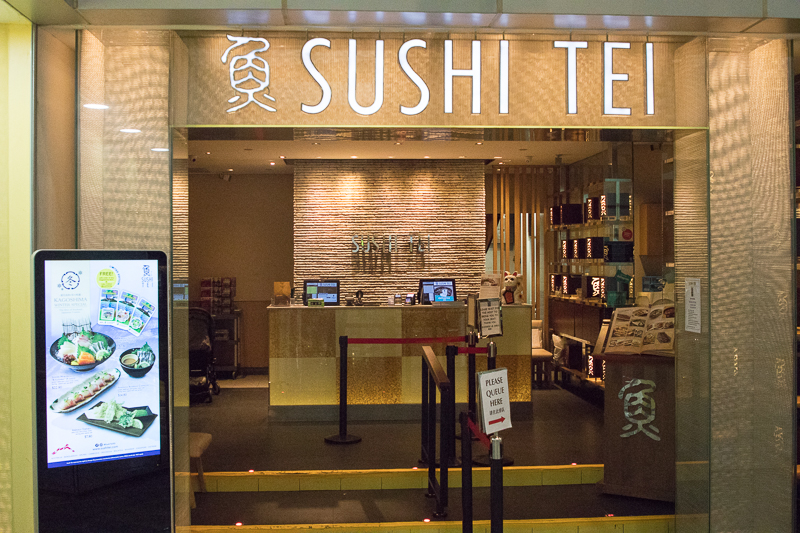 I was pleasantly surprised to find out that Sushi Tei serves Lobster Porridge (S$58++) as well. 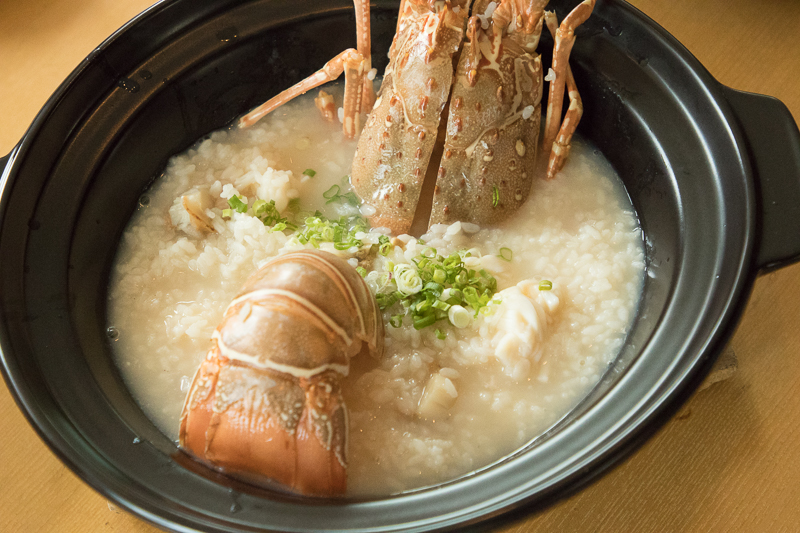 They serve their lobster porridge with scallops, after boiling in a miso broth for extra rich and savoury flavours.

Sushi Tei uses fresh lobsters — in fact, they keep live lobsters in a tank, cooking them in the miso broth on order. On top of that, the large chunks of succulent lobster had a firm bite to it, which I really liked. 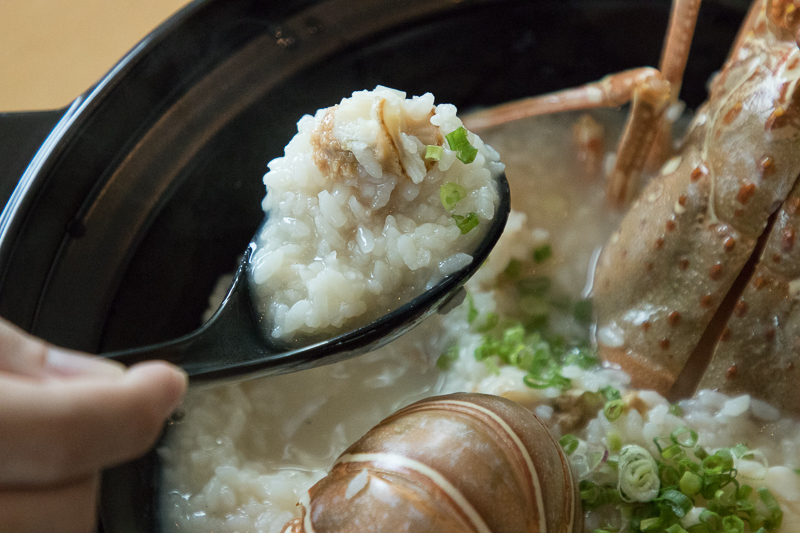 I also enjoyed the combination of fresh lobster chunks and scallops, as this added some natural sweetness. 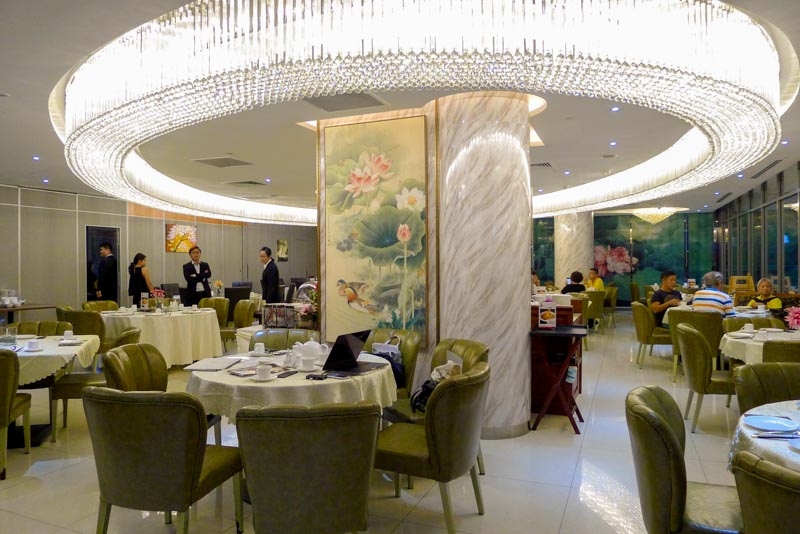 Located conveniently on the second floor of Marina Square, Dragon Bowl is a Cantonese restaurant that serves up a wide variety of traditional Chinese cuisine and dim sum. 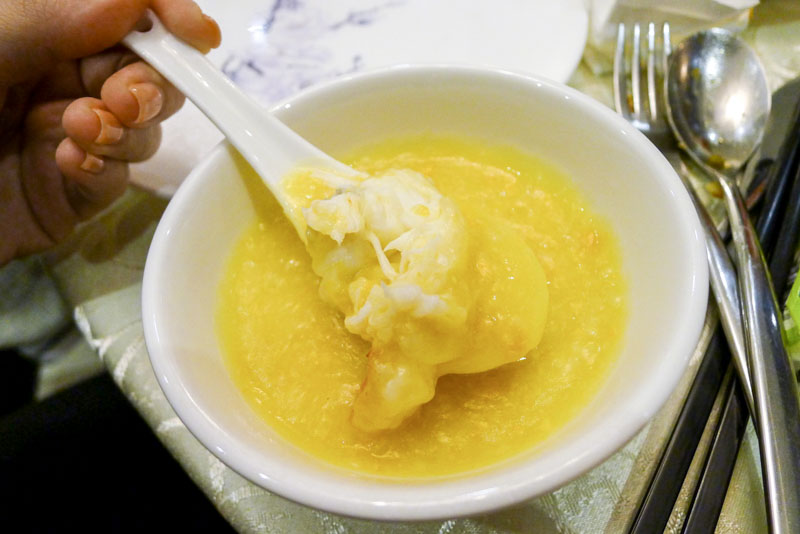 Since it’s a restaurant that’s named after the imperial meal made for emperors in ancient China, you know you can expect the best.

Dragon Bowl offers a luxurious Crab Roe Live Lobster Golden Porridge ($38). The dish had a luscious, vibrant yellow hue from the crab and the large chunks of fresh lobster.

The lobster meat was very succulent with a firm crunchy bite to it. What surprised me was the use of salted egg yolk in the porridge, which gave a distinct sharp and savoury flavour and enhanced the fresh sweetness of the lobster. 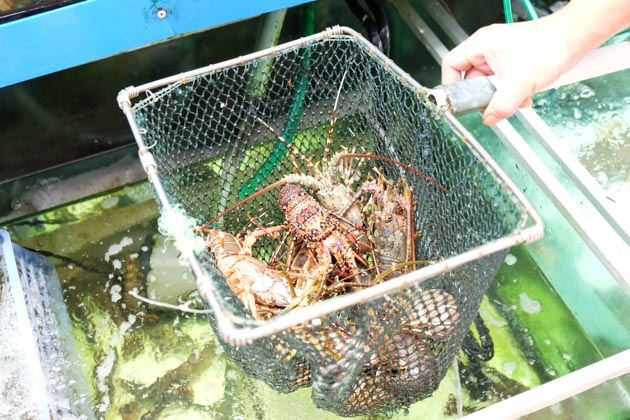 Orchid Live Seafood has been around since 1999 and has since expanded to two outlets, one at Bah Soon Pah Road and another at Seletar Hills Estate. 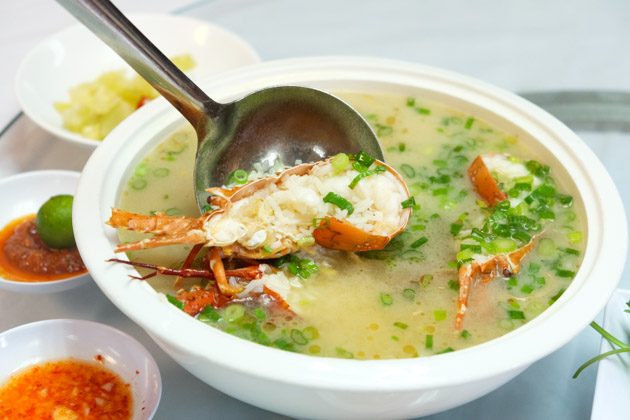 Orchid Live Seafood is known to be the first to come up with their own Lobster Porridge ($10/100g). They cook the rich broth with the natural juices of the lobster for four hours, producing a full-bodied, sweet and robust porridge.

The lobsters that came with the dish was chewy and should be consumed with the stock for the best flavour. The chives also provided an earthy leafy taste which contrasted with the rich broth.

I would recommend the 500g pot for two to share or the 1kg one for a table of four to get the full experience.

Located at Bedok North Avenue 2, Jin Long is by Instagram influencer Xin De’s parents. They started off as a humble zi char stall in 1999 and went on to open an air-conditioned restaurant.

Their Live Lobster Porridge (S$10.80/100g) has a seasonal price but even so, I was impressed at how it is still relatively affordable.

Psst, the restaurant doesn’t have any service charge, which makes it even more affordable.

The porridge comes in a traditional claypot which keeps the porridge warm while you eat. The broth was slightly paler, but the dish was still just as flavourful.

The porridge had a rich and buttery broth, and the briny seafood flavour lingered on my palate. This was coupled with the natural sweetness and succulence of the lobster.

Joyden Seafood is a seafood restaurant that’s hidden in West Coast Recreation Centre. Unlike the other lobster porridges I’ve tried, their Lobster Porridge (S$128++) looked rather pale and unassuming.

Despite that, the broth had a pronounced sweetness from the lobster parts simmering in the soup over a long period of time. The soup had a buttery consistency while the subtle saltiness hit the back of my throat as I ate.

The lobster in the porridge was enormous, and parts of it stuck out from the large bowl it was served in. I could lift the perfectly cooked and firm lobster meat from shell effortlessly, and I liked that it had a  springy bite to it. 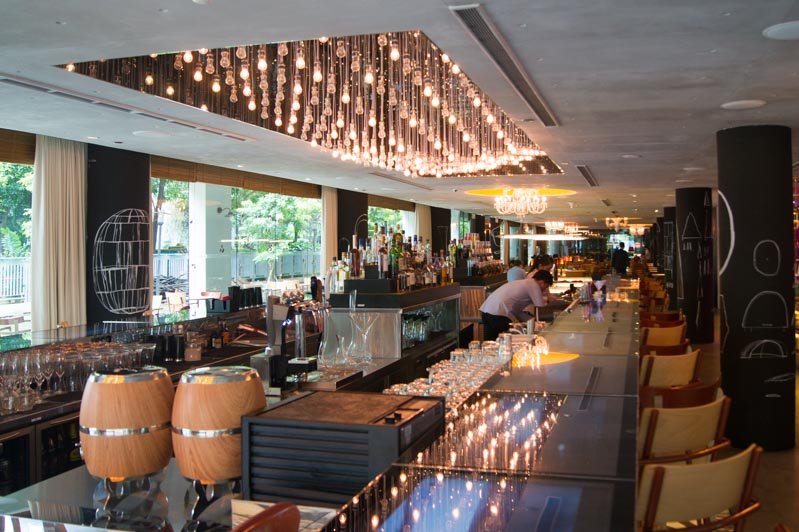 Beast & Butterflies is a fusion restaurant in M Social Singapore, next to the Singapore River at Robertson Quay.

Their Lobster Porridge (S$35) is served in a hot stone bowl and was a comforting bowl of traditional Teochew porridge. The fragrant broth was boiled with chicken, pork bones, mud crab and flower crab for robust and lingering flavours. 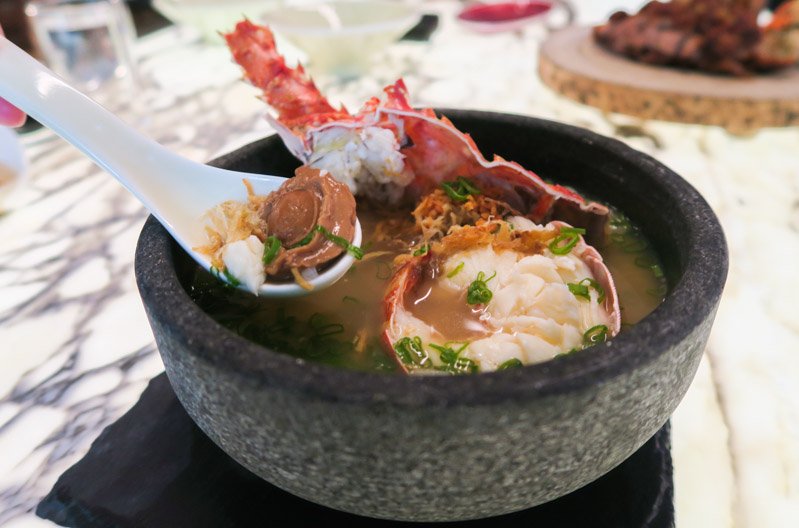 On top of that, they even have baby abalone in the porridge which came with a generous portion of lobster. I liked how there were distinct layers of flavours in the dish, from the sweet lobster to the briny dried scallops to the refreshing ginger shreds.

ChopeDeals: Save 10% at Beast & Butterflies > 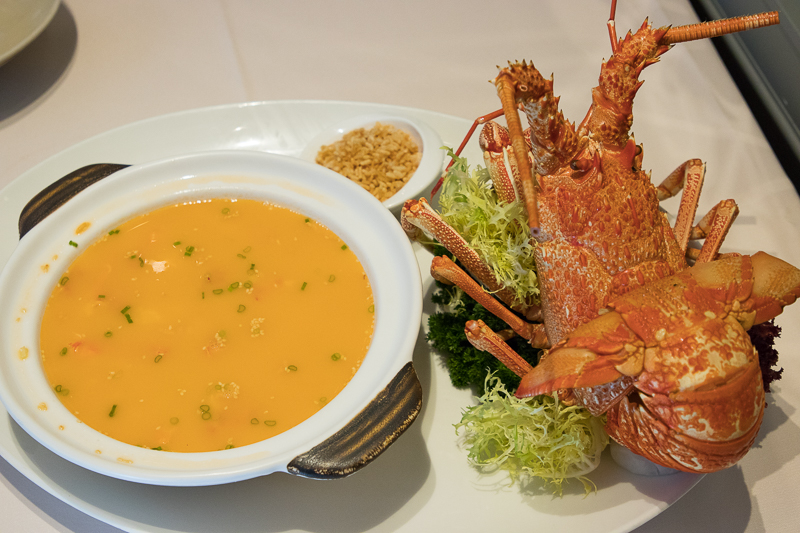 Situated in Chijmes, Lei Garden is known to many as a go-to restaurant for Chinese food. Lei Garden is a fine-dining Chinese restaurant that has even earned itself a Michelin guide award in 2018. 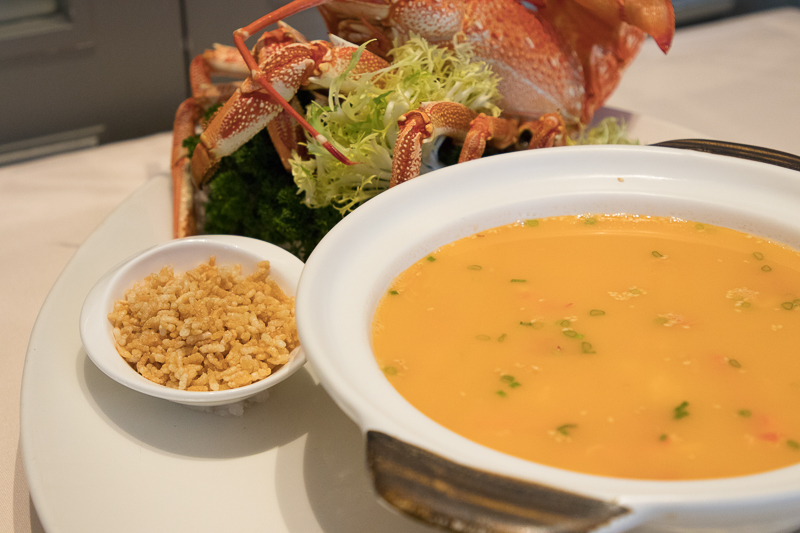 Aside from dim sum, Lei Garden serves a Rice And Crispy Rice With Minced Meat In Lobster Soup (S$30++). This dish was basically a Teochew porridge with lobster soup poured over rice.

Served in a huge claypot, the porridge comes with a generous portion of lobster meat. After it was served, the waiter would pour a large bowl of crispy rice bits into the claypot and you can eat as it sizzles loudly. 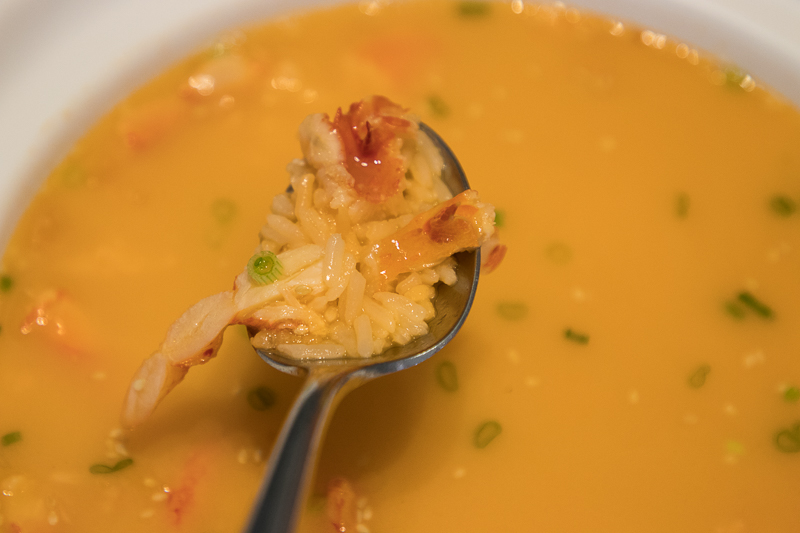 The crispy rice bits were crunchy, adding some texture to the dish.

I really enjoyed this unique lobster porridge from Lei Garden. I couldn’t help but slurp up all of the sweet lobster broth.

I recommend eating the porridge immediately when it’s served so that the crispy rice bits won’t turn soggy.

Lobster porridge isn’t something that’s super common in Singapore, so maybe this list will help you suss out the best ones. What’s your favourite kind of porridge?