It has been pretty much established that Toa Payoh is a hub for delicious food. Especially with a variety of hawker centres and coffee shops studded around the estate, there is no lack of good local delights in the area. Fish soup is one of those dishes that people love as it’s light on the palate and leans toward the healthier side.

I tend not to choose them for my meals as I prefer full-bodied and heavier dishes. However, there’s a particular stall that I really enjoy going to as it stands out amongst the many other fish soups I’ve had. As straightforward as its name, Lorong 5 Toa Payoh Food Centre Fish Soup is located at Lorong 5 Toa Payoh. 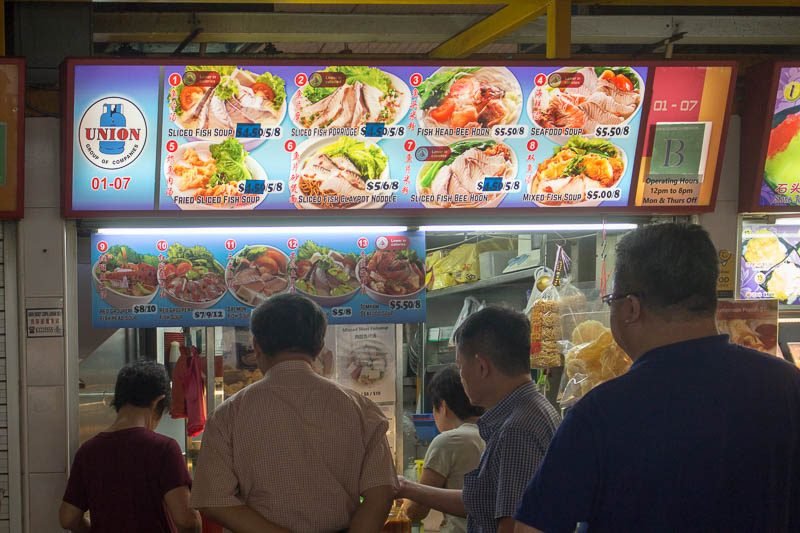 They do not have a name on their signage, but you will easily recognise the stall when you are there. It’s the stall facing the road, with a snaking queue even when I went down at 5pm to avoid the dinner crowd. Of course, I had to go with one of my favourites, Fish Soup With Minced Meat (S$5). I usually get this as I love the addition of minced meat, which alleviates the experience of having a bowl of normal fish soup. I really love their Salmon Soup as well, but it was sold out by the time I was there. 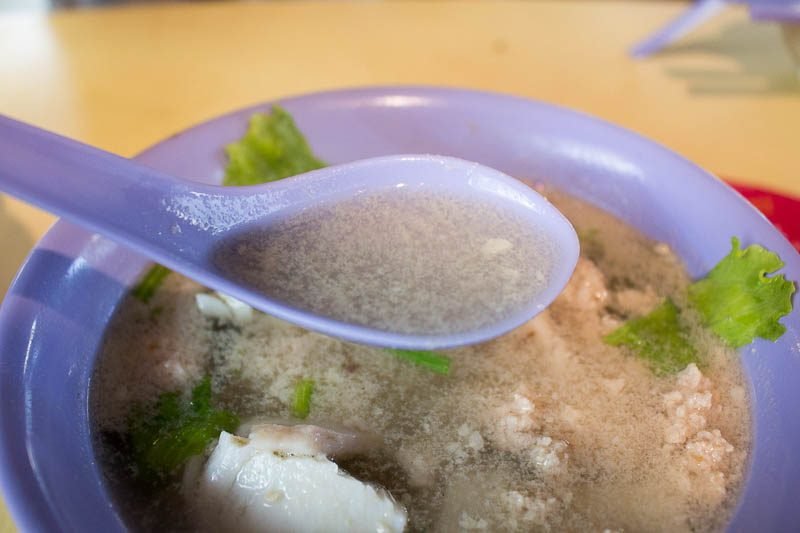 The minced meat added a nice touch of richness and saltiness to the soup. The broth itself was clear and refreshing, but the extra oomph was delightful. Despite the cloudiness, it was still light with a robust flavour. It came with numerous thickly sliced batang fish (Spanish mackerel) and I loved how fresh it was. The fish slices were not only huge, but tender and flaky too. 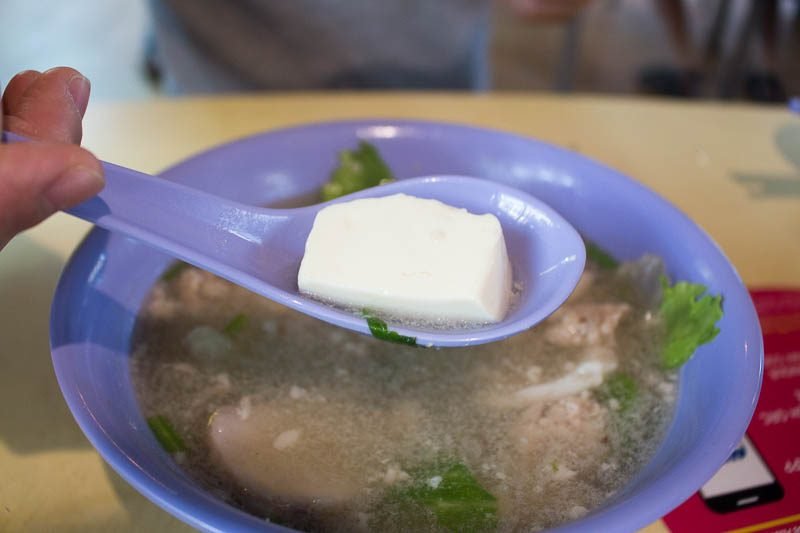 The bowl also came with silky tofu and crunchy vegetables, which complemented the fish soup well. They were simple ingredients done right. 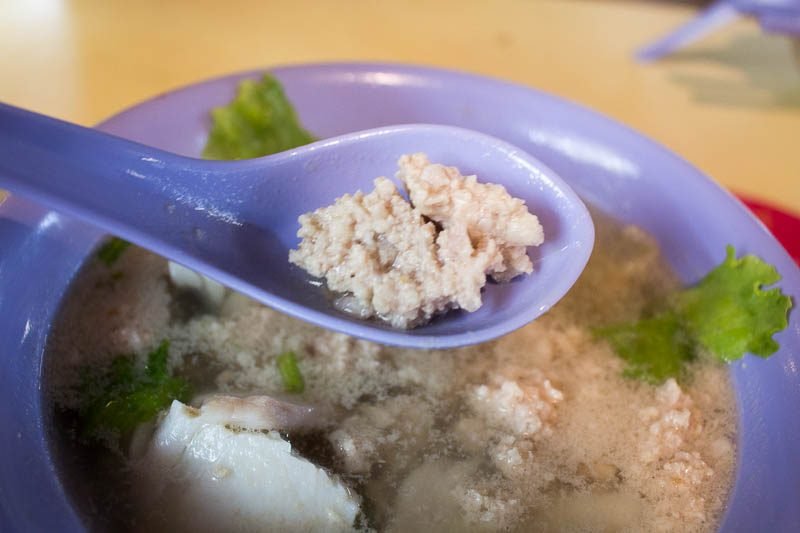 They were extremely generous with the portion of minced meat chunks. I had pieces of meat in almost every spoonful. The meat itself was also well-marinated, which enhanced the umami taste in the soup. The savoury notes complemented the natural sweetness of the fish, which gave it a full flavour profile. 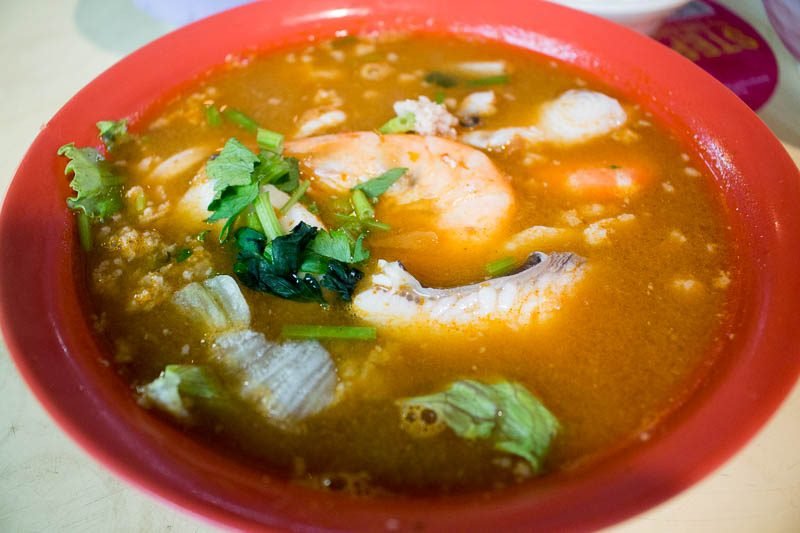 I decided to give their other offerings a try and ordered a bowl of Tomyum Seafood Soup (S$5.50). It was brimming with ingredients, complete with a crimson red hue. 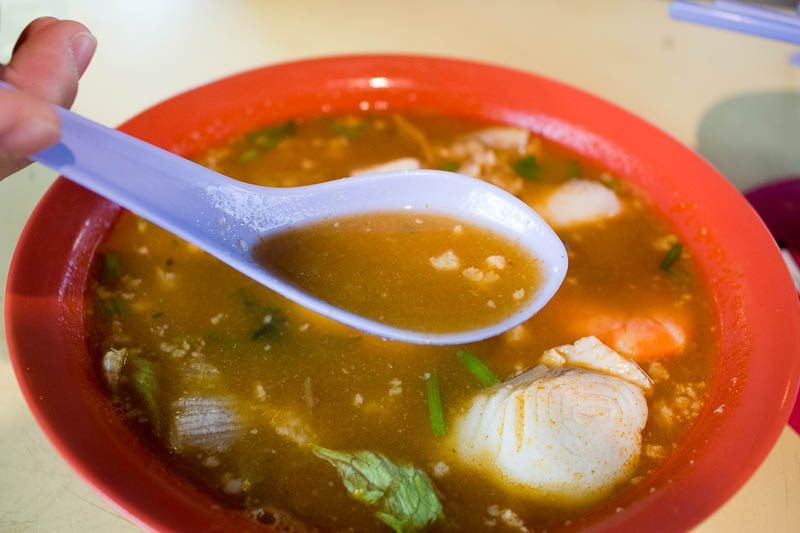 I was slightly worried that it would be really spicy as I took a tiny sip of the seemingly potent soup. However, it was very well-balanced with both spicy and tangy notes.

It was flavourful and appetising, and I found myself going for more. It had more depth than their original soup, which I really liked. This bowl came with slices of batang fish as well, minced meat, as well as pieces of sotong (squid) and prawns on top of the tofu and vegetables. The prawns were very fresh, with a substantial crunch and a hint of sweetness. The shell was easy to remove from the flesh too which I appreciated. 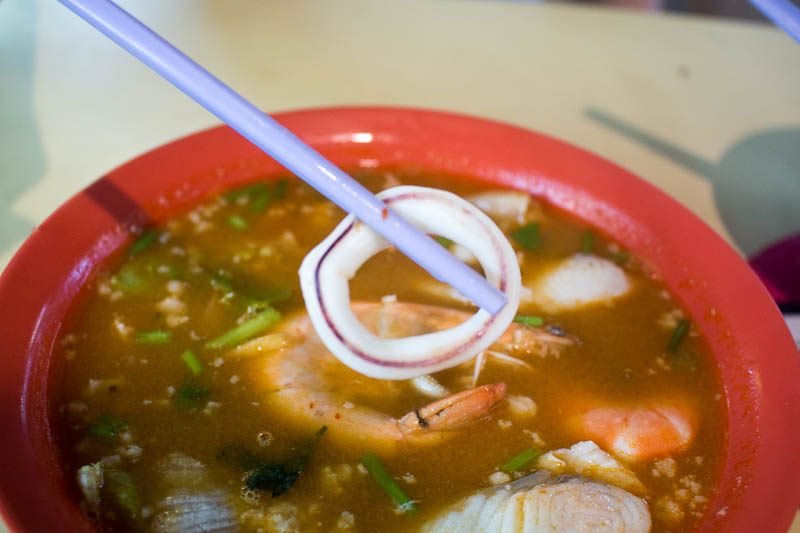 The sotong pieces were springy with a nice bite, a sign that they were fresh and cooked well. When they are overcooked, they tend to go rubbery and bland which is definitely not the case with this one.

For just S$0.50 more than the Fish Soup With Minced Meat, I would consider getting this hearty bowl of seafood the next time I visit! If you are not a fan of tom yum, you can get this with their original soup base too. 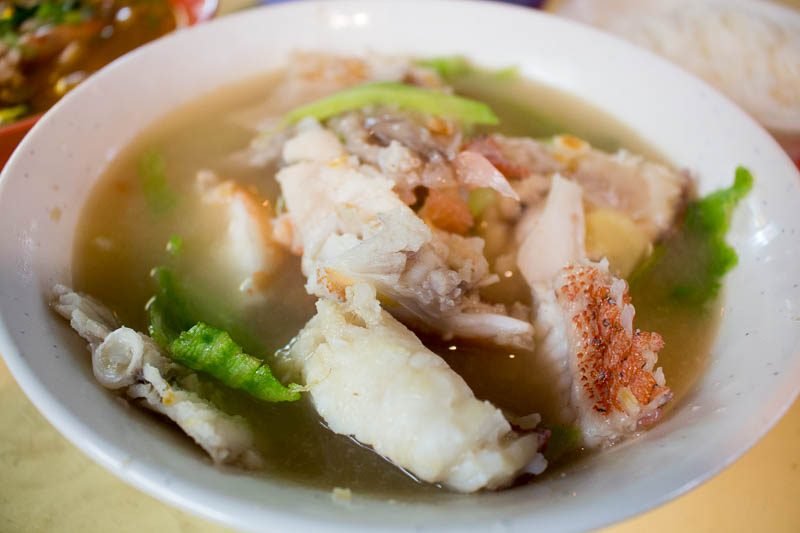 The last dish I got was the Red Grouper Fish Head Soup (S$8). This was the priciest item on the menu, and I wanted to see if it was well worth its price. 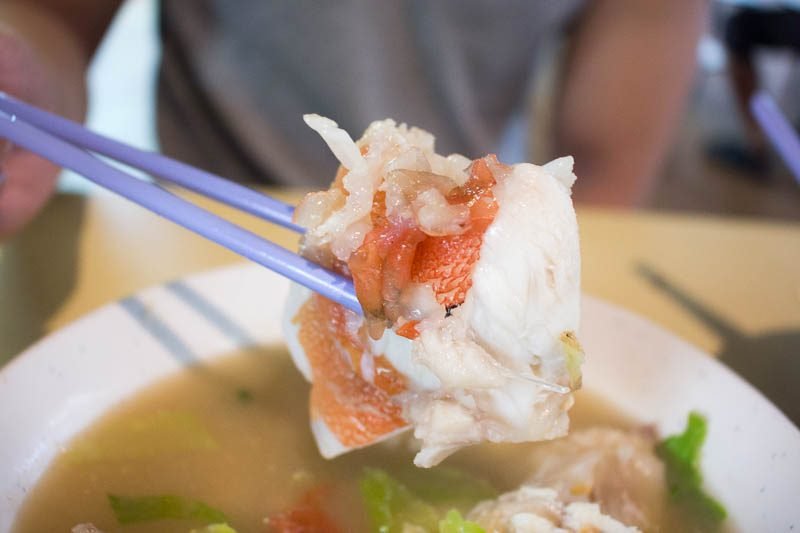 Grouper tend to be more firm in texture as compared to batang fish, with a richer and more flavourful flesh. Indeed, it had more bite to it with a distinctly sweet flavour.

The meat around the fish head was fleshy and voluminous, and I savoured every bit of the fresh and succulent meat. It had a hint of fishiness, which I didn’t mind at all as it actually made it tastier. There was so much meat in this bowl I figure it could have been shared by two diners. Do be careful of bones though, as I found myself picking out bones from the flesh pretty often. 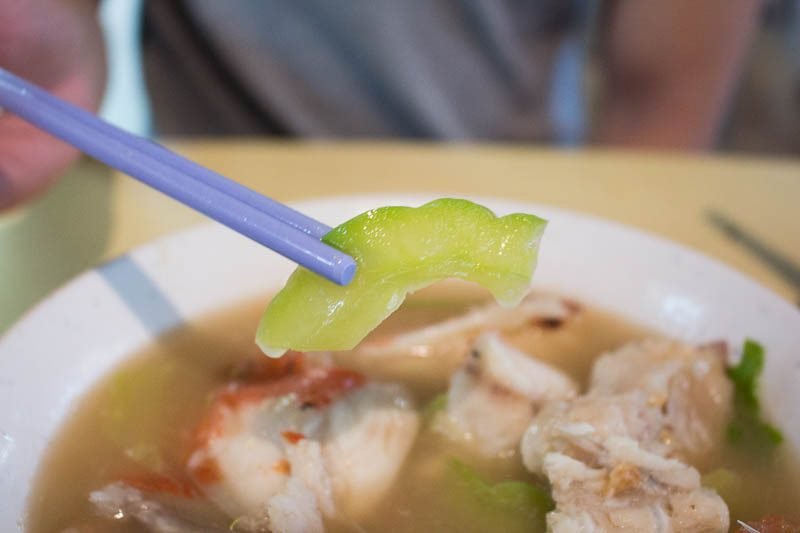 The soup in this bowl was milkier and more aromatic, which made it very addictive. I loved the addition of bitter gourd slices, which helped to balance out the richness of the soup. 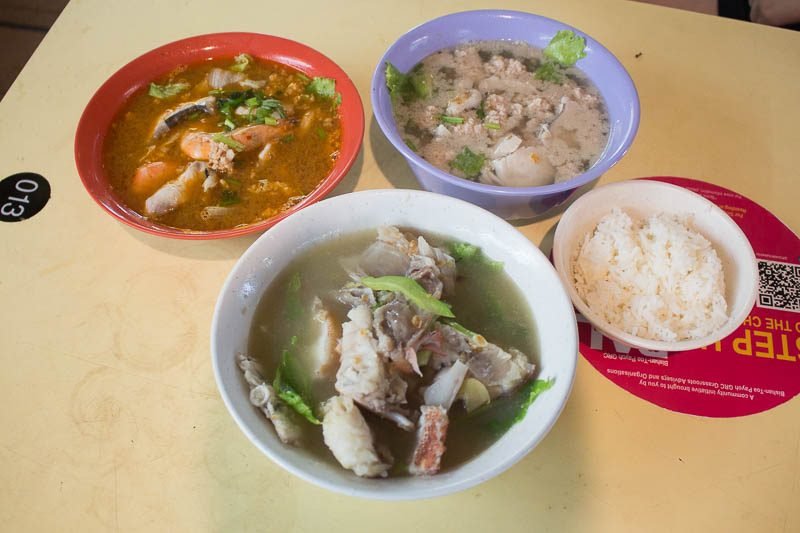 Toa Payoh Lorong 5 Food Centre Fish Soup is popular for good reason. Not only are their offerings fresh and generous, but they are really affordable too. They do have other special add-ons like Fish Maw, Mock Abalone and Mushrooms as well, for those who wish to spruce up their fish soup differently.

Just be mindful that they close once they are sold out for the day, so head down early to avoid any disappointment!