When Brooklyn darling Lucali joined forces with BYGB Hospitality to unveil Lucali BYGB in Singapore, it was, needless to say, all the rage. It seemed as though just about every media and personality had to get a taste, and the reviews just kept rolling in.

In spite of his notoriously toughly-worded review, my Editor-in-Chief, Zat, eggs me on to pay a visit and awaits with bated breath to see what I have to say about the lil’ ol’ establishment. Upon arriving, I already accidentally stumble into the Camp Kilo Charcoal Club because I simply can’t locate the elusive restaurant even after minutes of going in circles. Turns out, you’re going to need the help of the lift with this one because it’s on the mezzanine floor.

The space is a humble 70-seater, with a menu of befitting size to go with. You won’t find yourself flipping through pages of options nor caught in a conundrum about your order, but sometimes succinct is better. Though what really strikes me is how absurdly priced everything is on the menu. For S$20 a sundae and S$10 a coffee, they better damn well be life-changing. As a pasta person through and through, I quickly zero in on the Cacio e Pepe (S$35) out of the three meagre options, which is a classic made with long fusilli, pecorino, and black pepper. If I didn’t know any better, I’d scoff at the mere simplicity of the dish, but those who understand will grasp just how delicate the balance of the few ingredients can be. As chefs like to say, the simpler the recipe, the smaller margin of error—because any flaw regardless of how small will quickly, and unforgivingly, rear its ugly head. The nature of the dish being made with long fusilli already appeals dearly to the unabashed pasta head in me, and of course, it’s imperative that the pasta is cooked to a perfect al dente, too. Anything less simply wouldn’t do. The fusilli presents a great bite that keeps every mouthful compelling, especially with how much garnish the pasta shape manages to capture at one go.

The grated pecorino that kisses the top of the dish is a choice that not only adds a ton of flavour to the plate but is also in keeping with the classic cacio e pepe recipe. With the saltiness from the pecorino cheese, the pasta dish oozes umami notes, but unfortunately, very rapidly becomes just that. It doesn’t take long before the cacio e pepe falls into being very one-note, and less-than-inspiring. To share, either a Calzone (S$30 for half, S$40 for whole) or Eggplant Parmesan (S$22) are popular choices, but because we’re already giving the famed Original 18” Pie a shot, we skip over the calzone today and go straight for the eggplant.

A plant-based version of the perennial chicken parm, the Eggplant Parmesan is a refreshing switch—especially since we’re putting something other than straight-up meat or carbs into our bodies at an American diner, no less. Showered in what I can only guess is shaved pecorino romano again, the eggplant parm sits stacked atop each other and is held together by decadent melted parmesan cheese glue. By now, it’s clear that the chefs here at Lucali BYGB love their shaved cheese, because it’s once again sprinkled over our Original 18” Pie Pizza (S$55, +S$5 per topping) that’s larger than all our three faces combined. What’s infuriating though, is the S$5 charge for every topping selected, so choose wisely. We decide on mushrooms, pepperonis, and onions at an additional S$15, totalling our pizza bill to a whopping S$70.

For the price point, we’re expecting well-fired pizza and pillowy dough but all that’s before us is dense, hardened pizza crust. As it is, I’m not a bread buff, so there’s no doubt in my mind that I’ll be leaving my dry crust pieces right where they belong—my plate (and the bin, subsequently). 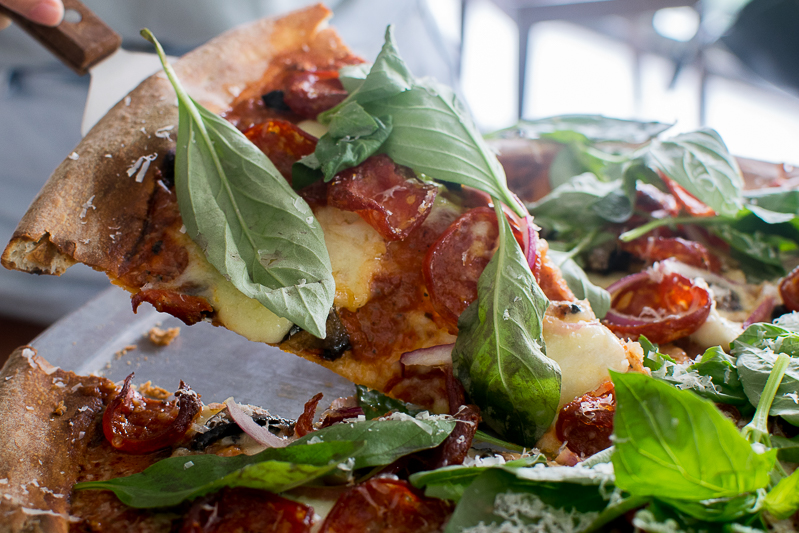 The build-it-yourself-style pizza features everyday ingredients like onion, anchovies, olives, and sweet peppers (and at S$5 each, the audacity)—hardly anything to write home about. In spite of its sheer size, I’ve yet to come across a single pizza that demands a price of that scale. And I still haven’t.

I may have already been warned, but with all the initial excitement surrounding the place, to have been ‘wow’-ed a little more would’ve been nice. If I’m being honest, the Eggplant Parmesan and Cacio e Pepe would have both narrowly passed the vibe check if not for the ridiculous price tags. And needless to say, S$70++ for a pizza of this calibre is just ludicrous.

My main gripe with Lucali BYGB is the unnecessarily inflated prices for fare that’s supposed to be down-to-earth and accessible for all—it’s almost laughable, really. It’s more than possible for good service and good food to both exist in an unpretentious space; even better when it’s in a place that’s inclusive for all. And the sooner that many establishments realise this, the sooner we can all be done with spaces that struggle to keep abreast with relevancy.

Previous articleBrew & Co, Ang Mo Kio: Sincerity in every brew and bake
Next articleBreakfast Club, Kovan: Breakfast for champions and pancakes for dinner 169 Hainanese Chicken Rice, Chinatown: “Serving only steamed chicken is a...