Well, well, well. Mcdonald’s has sneakily added a new item to its menu and it’s definitely no stranger to us Singaporeans.

The new Prawn Paste Chicken Cutlet made its rather hush-hush entrance in early December 2018 and the news skyrocketed across the nation in no time.

Back in July, Mcdonald’s introduced the Ha Ha Cheong Gai burger, which featured a prawn paste chicken cutlet that lay amidst a sesame bun. I distinctly remember the seasonal burger to be rather lacklustre, so I wondered how this returning sidekick would fare. The unsuspecting sinful snack came tucked in a white and green paper pocket, much like the one you get when you order a hashbrown.

For S$2, I thought it was a rather large piece. It looked similar to that of a McSpicy cutlet, clearly using the crowd-favourite chicken thigh.

It was coated in a thick batter which gave the cutlet a crisp exterior. Plus, the familiar aroma of ha cheong kai was all too mouth-watering. 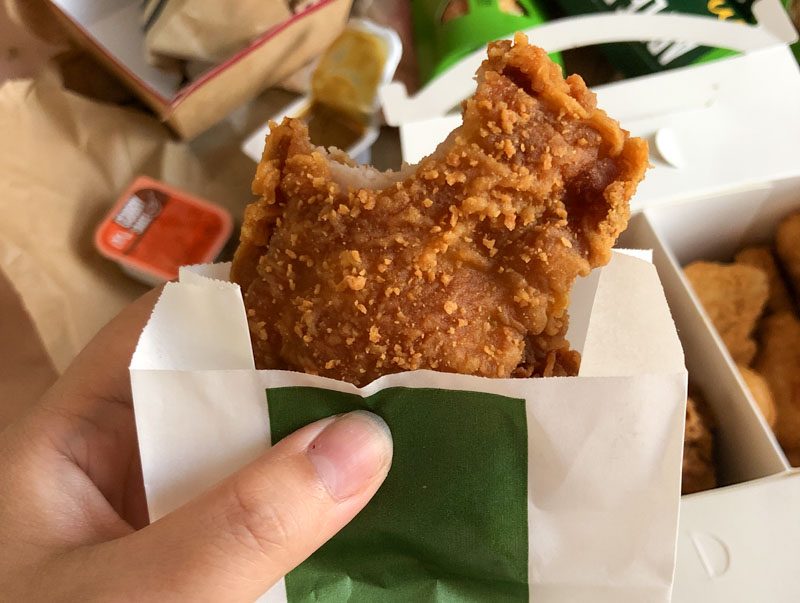 The taste of the prawn paste was rather strong as I chomped away and I couldn’t help but compare it to the usual zi char prawn paste chicken. This boneless option was a plus point for me but in terms of flavour, I’d say the original ha cheong kai still topped the chart.

The batter was a bit too thick for me, which kind of overwhelmed the juicy meat. Perhaps I got unlucky with this piece. I couldn’t help but ponder on the thought: What if McDonald’s started selling those addictive McSpicy cutlets too? (Hint hint)

Still, it was an interesting snack from the team at McDonald’s, instead of another seasonal burger special.

The prawn paste chicken cutlet is also available via McDelivery and GrabFood, so if you feel like passing on a trip down to your nearest outlet, you can count on delivery to fix that craving. But between this cutlet or a McSpicy cutlet, I’d like to see the latter happen, please.

Better to grab one soon before they run out!

Previous articleScrambled: Burgers & Steak With Scrambled Eggs + An Egg-centric Menu In Tanjong Pagar
Next article6 Kid-Friendly Places At The Shoppes At Marina Bay Sands To Spend Your Holidays