Offering a cuisine close to heart, yet on the cutting edge. With the aim of conserving its roots and traditions, while striving to portray an inventive dining scene, Meta — short for “metamorphosis”, opens its doors at Keong Saik Road. The restaurant embodies the concept of infusing Asian tastes into the traditions of a French cuisine.

The narrow restaurant makes use of simple, earth colours as the main colour tones for its interior design. Making use of reflective marble tiles and slightly-dimmed spotlights, the dining ambience is one which is simple yet classy. Hailing from South Korea, head chef Sun Kim taps on his exposure and experience at the prestigious Le Cordon Bleu in Sydney and the Korea Culinary Arts Vocational School.

His inspiration for his career came when he chanced upon one of Chef Tetsuya’s books, which led him to leave South Korea to head to Sydney, where which he landed a position under the legendary chef. 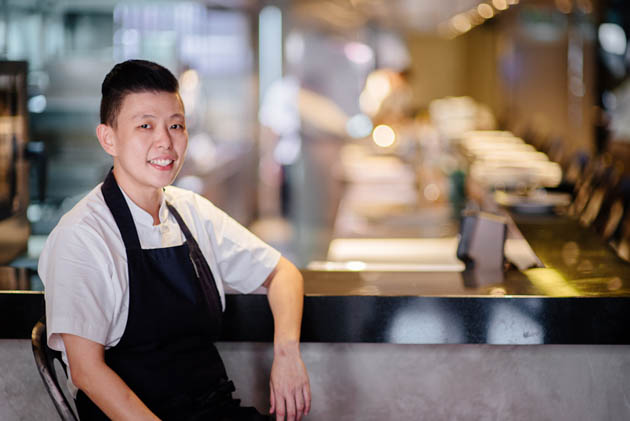 For this review, we’ll be trying the Winter Set Menu. 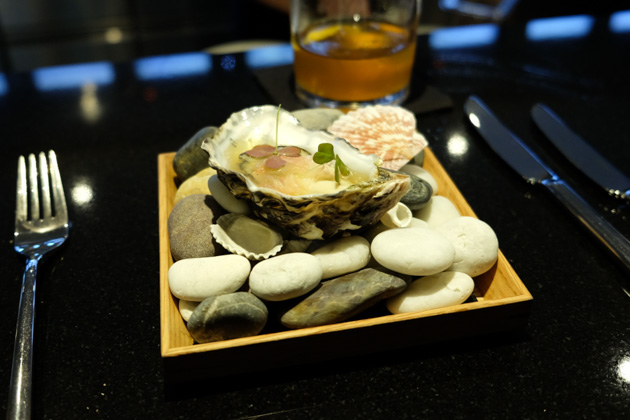 Oyster with Pomelo, Lemon and Ginger

The oyster itself was very fresh., while the pomelo provided a welcoming sour taste and the ginger offered a fragrant cleansing to the palate to rid of any oceanic flavour. As the first dish being served, it helped in awakening the taste buds. 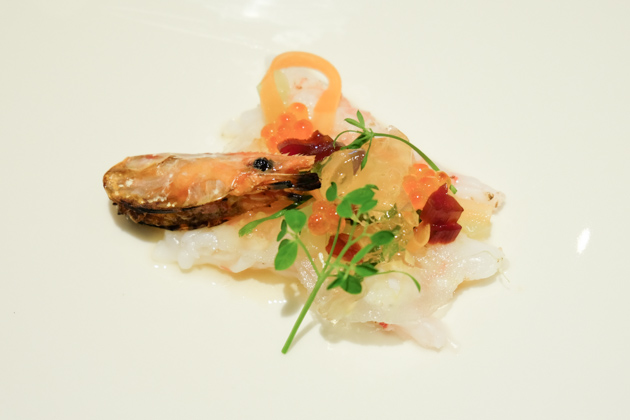 Amaebi with Yuzu and Apples

This dish is made up of Japanese sweet shrimp, with the prawn meat served de-shelled. The exquisite element of this dish is the charred prawn head with all its flavourful gooey essence, which we instructed to be eaten the last.

Served with dashi jelly, trout roe, slivers of pickled beetroot stems and carrot, the prawn meat is sweet while the bits of trout roe offered bursts out salty umami upon bite. Indeed a good balance of flavour.

Concluding the dish, the charred prawn head gave a fragrant smokey wrap up to the dish, offering a crusty crunch upon chew. 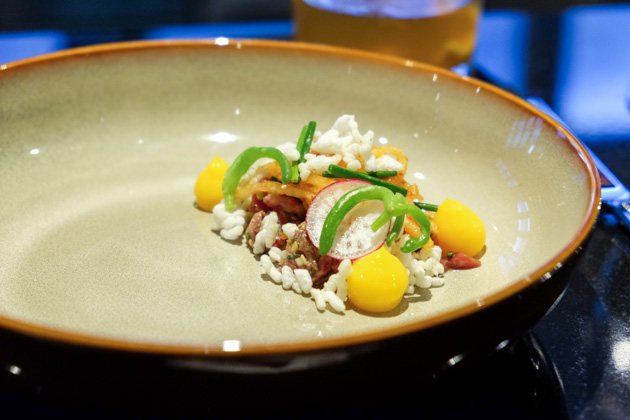 Beef tartare was served medium rare. Made up of fatty wagyu beef slices, they went well with the crunchy kimchi-flavoured pear strips.

I specially love the egg jelly, which was unique in form. It gave a bouncy chew upon bite and the texture of the egg yolk was awesome, not too hard nor too soft. It gave a contrasting salty taste to the spicy and sour kimchi, hence a good balance. 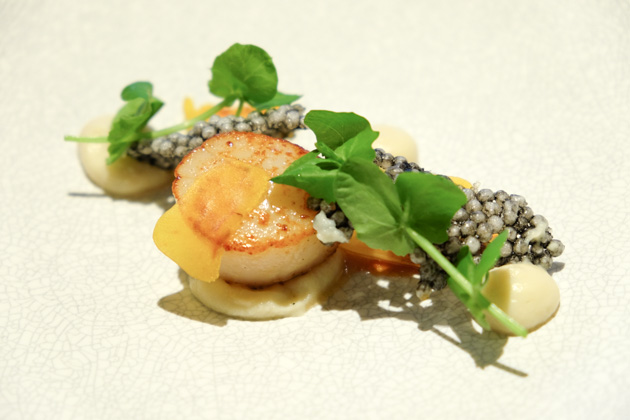 Hokkaido Scallops with Endive in Miso and Squid Ink Sauce

Head Chef Sun Kim uses Korean miso instead of Japanese miso for this dish, so as to portray the taste of his roots and culture. Unlike the scallops which I usually taste from other places, the one being served here was of a soft and spongy texture when bitten into.

The taste of miso and squid ink could be stronger though, but I especially love the jus that added a tinge of sourness to the scallop. 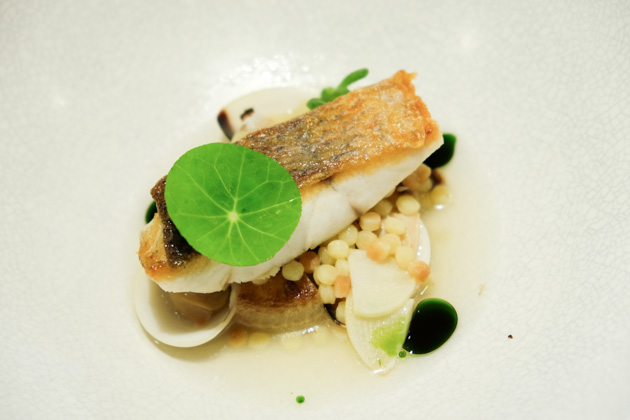 Squirts of oil were added to this dish upon serve, with the purpose of adding more flavour to the dish and preventing it from drying out. The sea bass was thick and tasted really fresh.

The fregola bits went well with the clams below, further enhancing the delightful texture contributed by both food items. This is a recommended dish for a seafood lovers like myself. Having been marinated for thirty hours and served rare, the beef was exceedingly succulent upon bite while still packing good beefiness.

The grass-fed short rib beef here was more liverish in terms of taste, with a long finish.

The strips of oyster mushrooms gave a sour flavour and a delectable texture, when eaten with the beef. How I wish they served more than two strips of it. 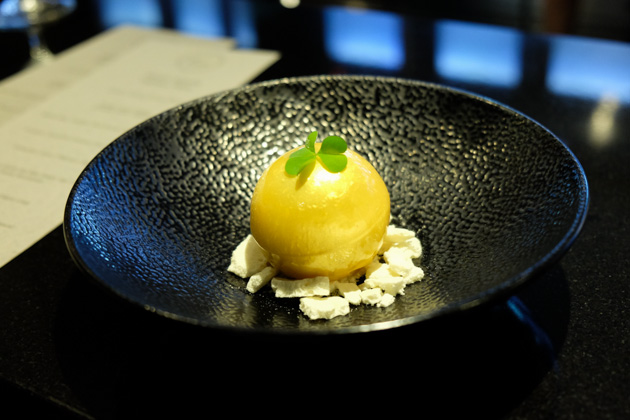 Contrary to the small candies, enrobed in chocolates which ‘bon bon’ refers to, the blood orange bon bon here at Meta is huge, which makes it delightful upon serving. Cutting it open unveils the silky and smooth-textured cheesecake.

Thankfully, the blood orange flavour of the crust was not overpowering, and was just enough to awaken my taste buds.

The small pieces of icing sugar served at the base of the bon bon were of a contrast of dry texture, and at the same time, adds a tinge of sweetness to balance off the citrus blood orange and cheesecake. 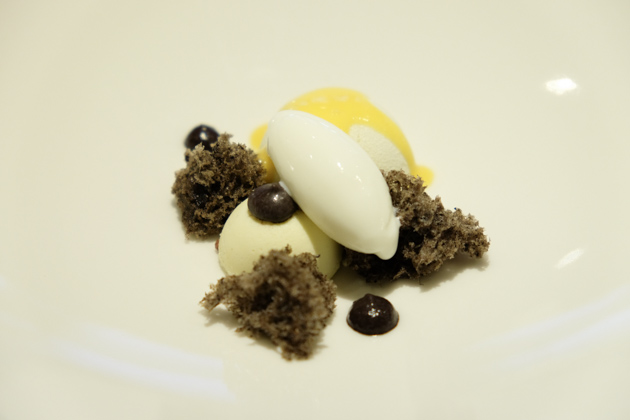 We were being recommended by the chef to eat the components of this dish separately, so as to be able to taste the wasabi cream distinctively. One of the white chocolate domes was topped with yuzu, and exudes a sweet, tropical fruit flavour upon bite.

The white chocolate domes were sweet while the yuzu and the yoghurt added a balancing sour flavour. I specially love the feathery, cake-like texture of the sesame sponge. 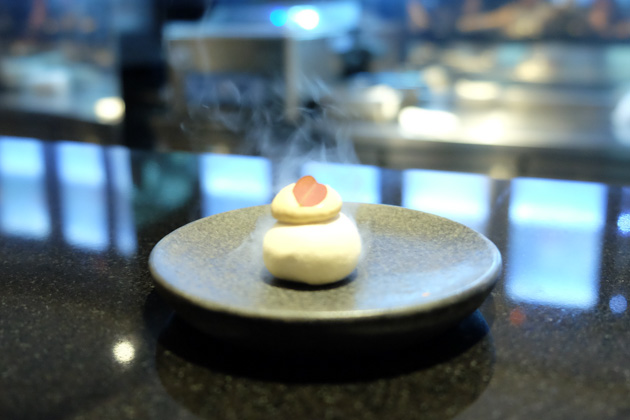 One of Chef Tammy’s creations out of her knack for fun desserts, The Rock is a dessert item that carries the concept of a nitrogen-led surprise when presented to the diner. Upon lifting the inverted bell jar that covers the dessert item, a fast, cooling and visible waft of nitrogen steam sweeps refreshingly past my face.

We were instructed to place the leaf-side of the dessert item on our tongues first. The nitrogen steam continues to exude from the mouth upon multiple chews.

Though more towards the hard end in terms of texture, this is indeed a savoury delicacy which was able to give a mint, refreshing act of cleansing to the palate.

The above dishes are part of Meta’s Winter Menu.

I love the way the different seafood platters are specially conjured here at Meta and am truly fascinated by how the dessert items were ingeniously handcrafted by both of the in-house chefs. It was indeed a wholesome dining experience with fresh seafood dishes that refresh the palate, before rounding up with savoury dessert treats that send sweet vibes to the heart.

Previous articleBoCHINche Brunch: Perky new dishes to Sunny up your Weekends
Next articleBar-a-Thym, Gemmil Lane: French cuisine worth burning a hole in your pocket