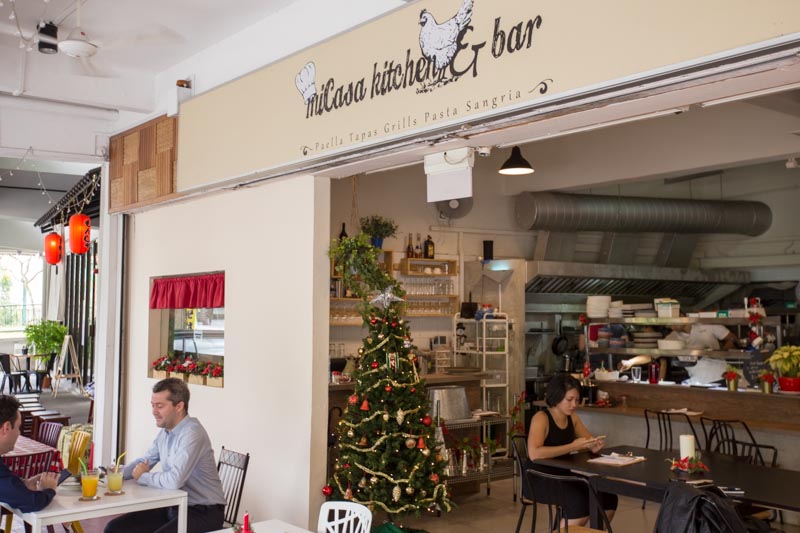 Walking into Mi Casa Kitchen & Bar almost feels like coming home. Which, of course, is the intention of owner Micah. Meals here are cooked from the heart, and the sincerity shines through in the comforting and filling Spanish food. 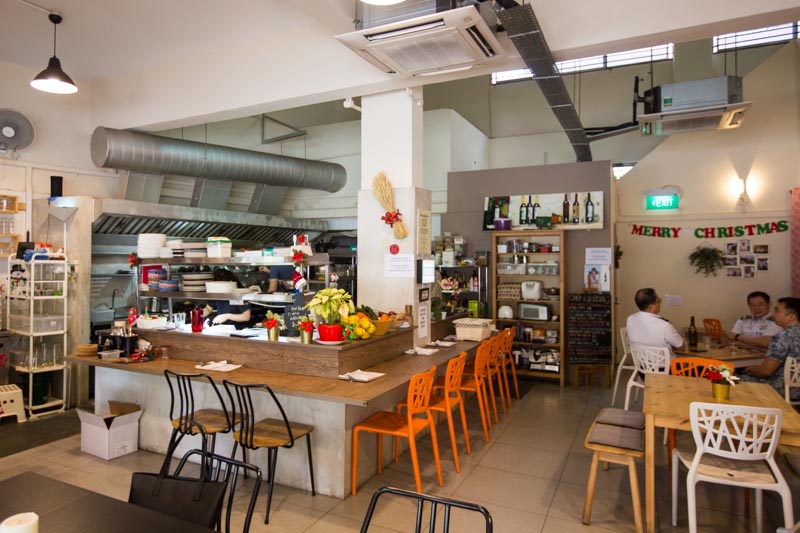 Tucked away along Jalan Jurong Kechil, this restaurant has a welcoming interior. An eclectic mix of light and dark wood tables, and colourful chairs adds to the feeling of home. The open kitchen also adds to the homely environment, because you get to see the crew preparing your food! 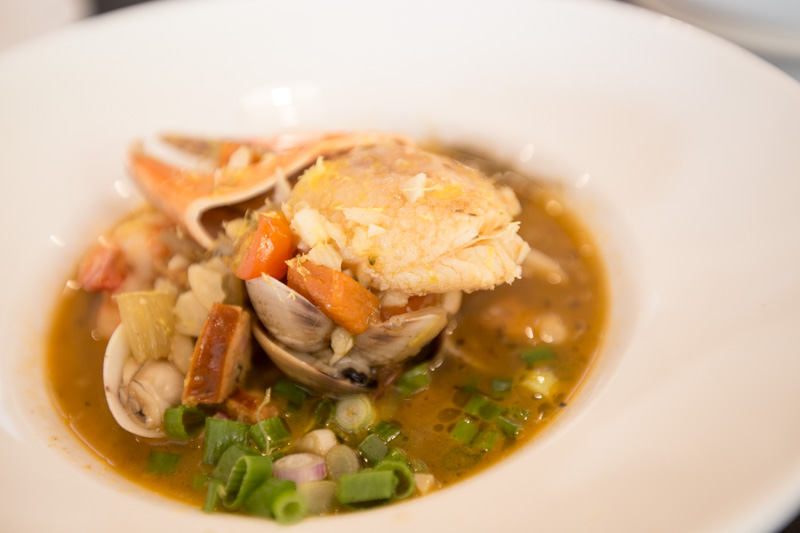 We decided to try a few dishes recommended to us by Micah himself. We started off with the Crab Bongo Stew ($22) to open our appetites with its flavour profile of spices.

I enjoyed the peppery and savoury stew, which came with lots of mussels and huge juicy prawns. 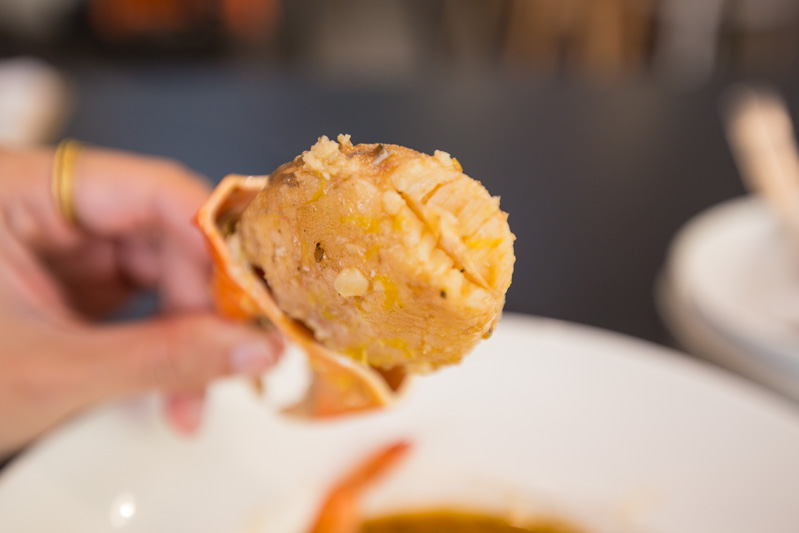 The highlight of the stew was definitely the crab claw topping the stew. The crab claw was already de-shelled for us, which made it easier to dig out the firm and slightly sweet crab meat. Infused with the spices from the stew, this chunk of crab meat tasted heavenly. Diving into meatier dishes, we tried the Pork Cheek With Mustard Dressing ($16). Plated beautifully, the pork cheek cubes were served with garlic mustard and roasted daikon.

Biting into the pork cheek cubes was a gastronomic experience. The soft and creamy meat simply melted in my mouth, and the meaty flavour lingered even after swallowing. 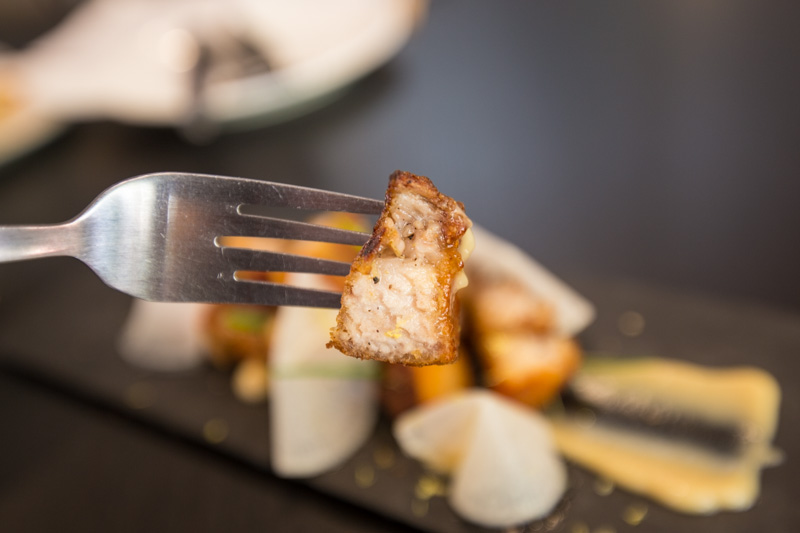 I particularly loved the crispy outer layer of the pork cheek cubes. The slightly smoky flavour made this dish especially addictive. Try eating the meat with a thin slice of daikon, which helps to cut through the creaminess of the pork cheek. 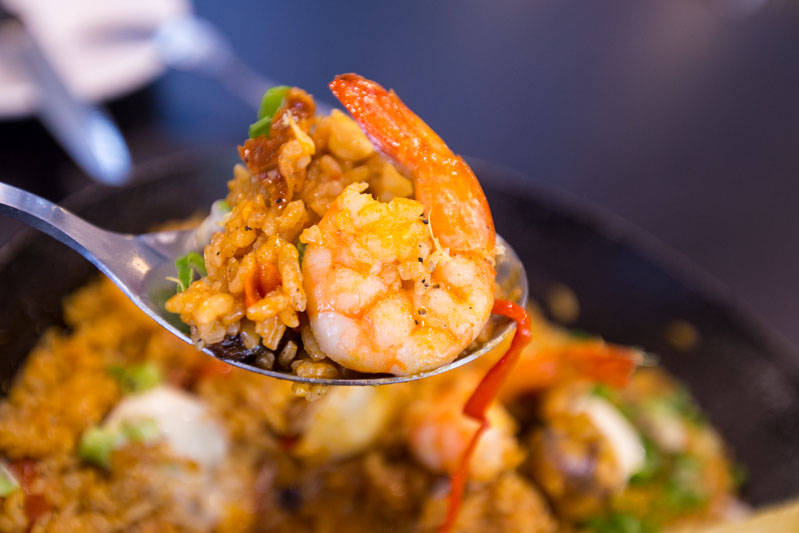 The Seafood Paella ($12 for small, $18 for medium, $30 for large) was another recommendation from Micah. Unlike the usual paella which tends to be drier, Micah’s take on this dish is one that’s slightly wetter.

The dish had a crusty bottom layer, which tasted like the bottom-of-the-pot rice that I love in claypot rice. 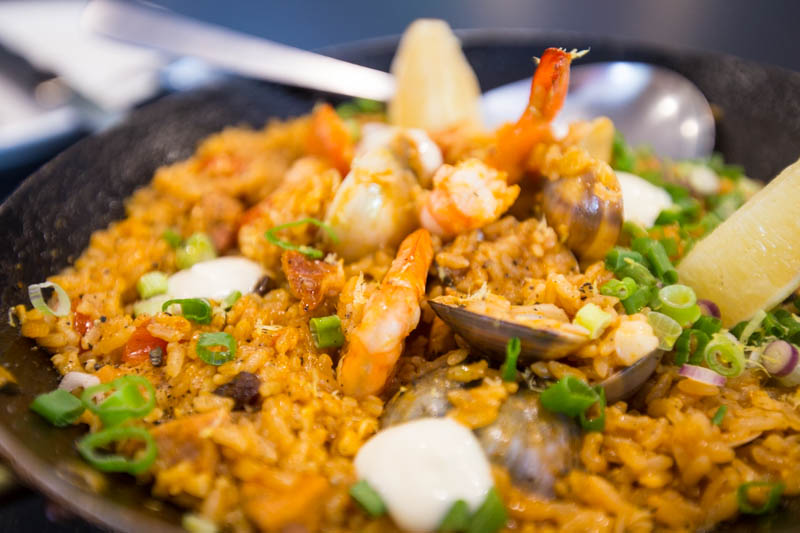 I liked the how the sharp taste of the chilli blended together with the zesty flavour of the tomatoes. The sprinkling of raisins also added a sweet burst of flavour to the paella. The huge juicy prawns, generous portion of mussels and chorizo bits in the dish added some much-needed protein. 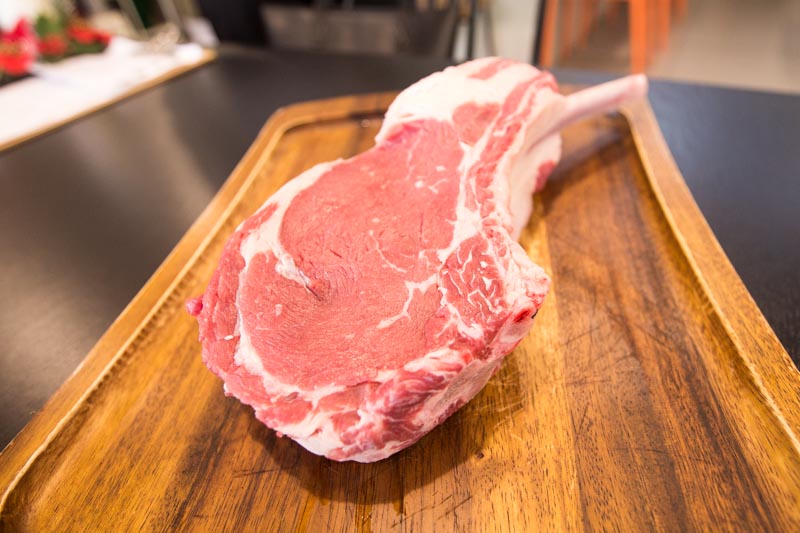 We were excited to try the Black Angus Tomahawk Steak ($130 per 1kg). This grass-fed, 120-day aged Australian steak is weighed based on the number of people sharing the meal, and the cut ranges from 900g to 1.3kg. Micah usually shows the cut to the diners before cooking, so we know what we’re getting. 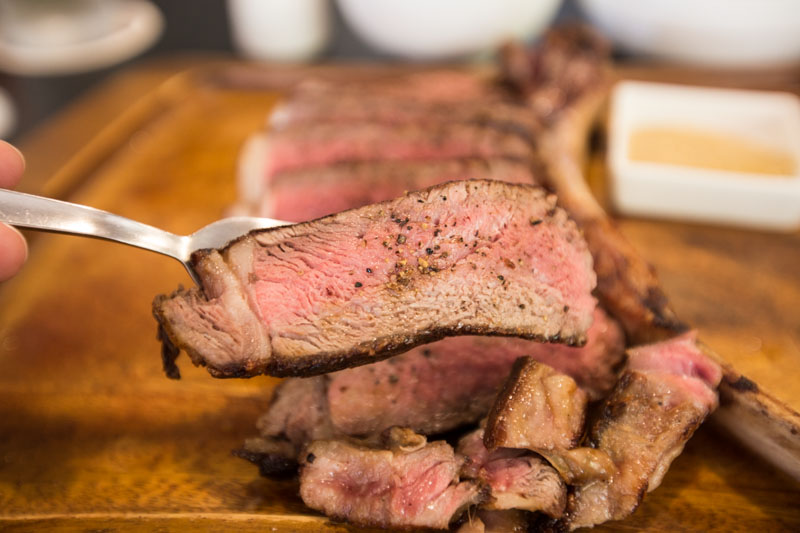 The steak was lean with a slight bit of fats, and a caramelised top layer. I enjoyed the variety in texture as I chewed on the meat, the slight char also added depth to the lingering flavour. Perfect for pairing with a glass of red wine.

This huge steak was served with quite a few sides, all of which are made in-house. The homemade coleslaw, in particular, helped to undercut the richness of the meat with its tangy flavour. I also liked the juicy sautéed mushrooms, which was fragrant and earthy. Finally, we finished our meal with a traditional Spanish dessert. The Churros ($12) were rolled in lavender sugar and served with dark chocolate sauce. As a churros lover, this was definitely the right choice for a sweet ending to the meal.

The buttery and warm churros were crispy on the outside, but soft and fluffy on the inside. Mmm, I could finish the entire plate all on my own! The churros were already coated with cinnamon and lavender sugar, but I’d also recommend dipping them in the chocolate sauce for that extra oomph.

If your preferred dining spot is one that’s cosy, head over to Mi Casa Kitchen & Bar. You’ll get a meal that tastes like home, and you’ll want to come back for more.