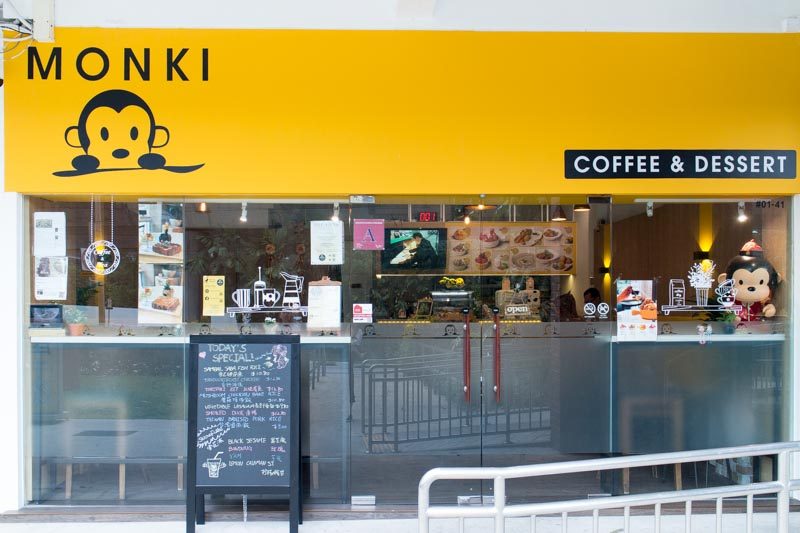 When it comes to Taiwanese desserts, the Snow Flake desserts are probably the most well-known. Monki Cafe, located at Holland Drive, specialises in just that with their special house blends which are sure to cool you off from the sweltering heat. It’s not easy to miss Monki Cafe when you walk along the street as its huge yellow signboard is sure to catch your attention. The small cafe is decked in yellow and white, with small potted plants sitting on the tables in an attempt at minimalistic decor.

Monki Cafe sells savoury food items too, like the Braised Pork Rice, but their dessert offerings are more extensive than the rest. Having said that, it’ll be a shame not to try some of their signature mains. 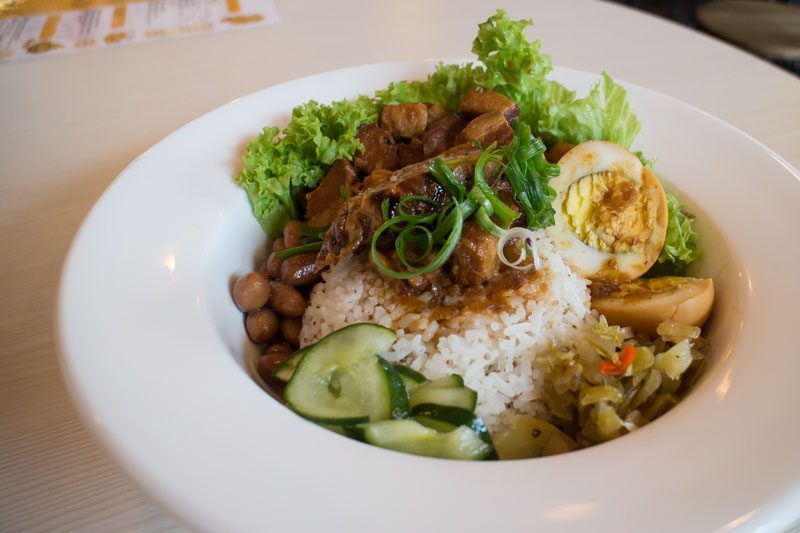 The Braised Pork Rice ($9),  is a deceivingly simple rice bowl, which uses rice mixed with Taiwanese red quinoa. Red quinoa has been cultivated in Taiwan for centuries and has been added to make the dish healthier.

At the same time, the red quinoa gave the rice a chewier texture which complemented the crunchy pickles well. 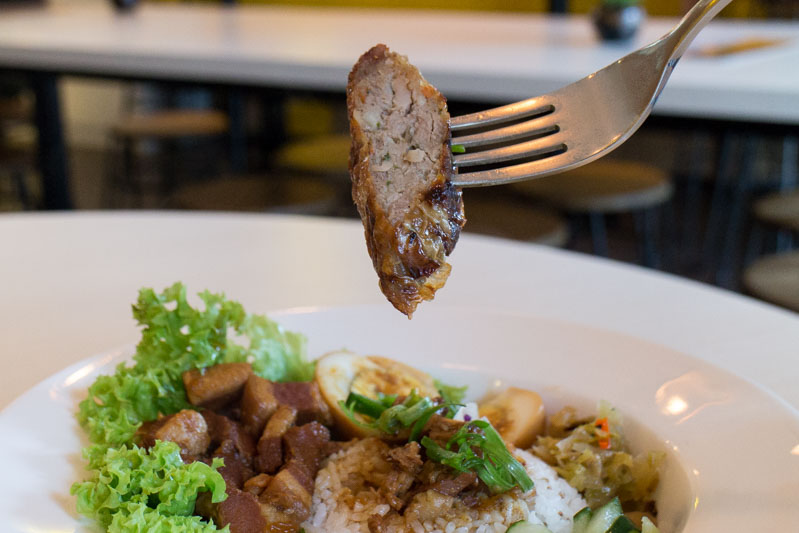 An interesting feature of this dish is that it comes with one piece of ngoh hiang, which may not be as common in other Lu Rou Fan. The ngoh hiang was slightly sweeter than the braised pork and paired differently with the other components in the bowl.

Portion-wise, one bowl of Braised Pork Rice was just right for one person. However, it may be slightly too small if you’re a big eater. But that’s okay, it just means that there’s more room for dessert. 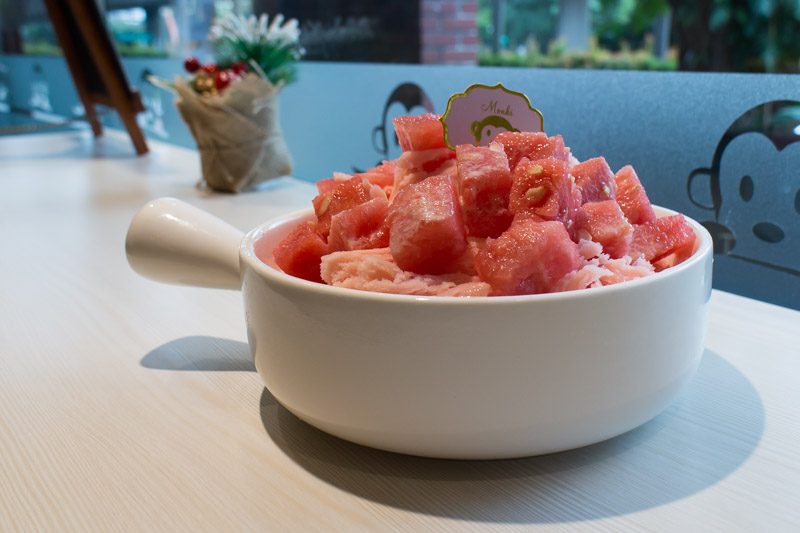 All the Snow Flake desserts served at Monki Cafe are made in-house, using only fresh ingredients. They come in a wide variety of flavours so if you can’t settle on one flavour, you can always request for a combination of two flavours. 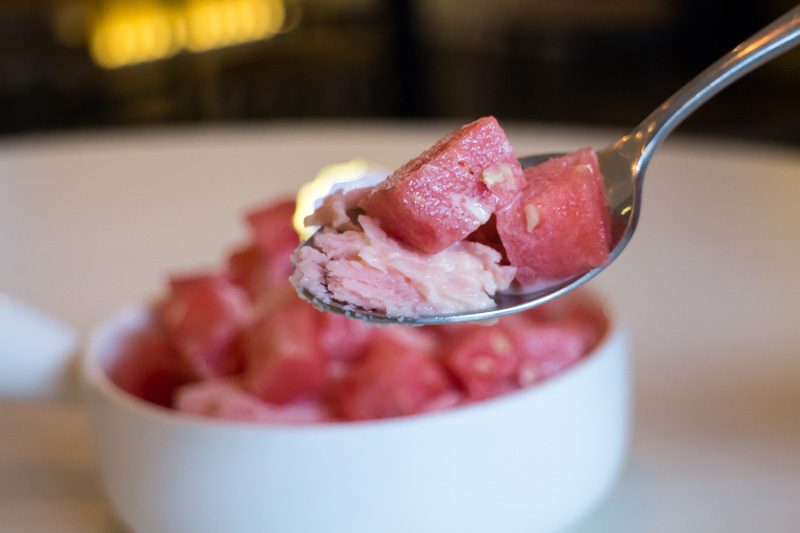 We tried the Watermelon Snow Flake ($6.50) which exceeded all our expectations. The shaved ice was a combination of a milk base and real watermelon. The result was a mild, slightly sweet dessert, which tasted like a refreshing watermelon milkshake.

The portion of cubed watermelon given was also really generous, so it’s definitely a good deal, especially for the price. What’s also impressive was that the shaved ice was so fine and so smooth, which is different from the usually icy desserts. Another flavour you can try is the Mixed Fruit Snow Flake ($8.80), which comes with regular milk ice and purple dragonfruit ice.

The dragonfruit ice and milk ice taste pretty similar, but the contrast between the colours makes it an Insta-worthy dessert 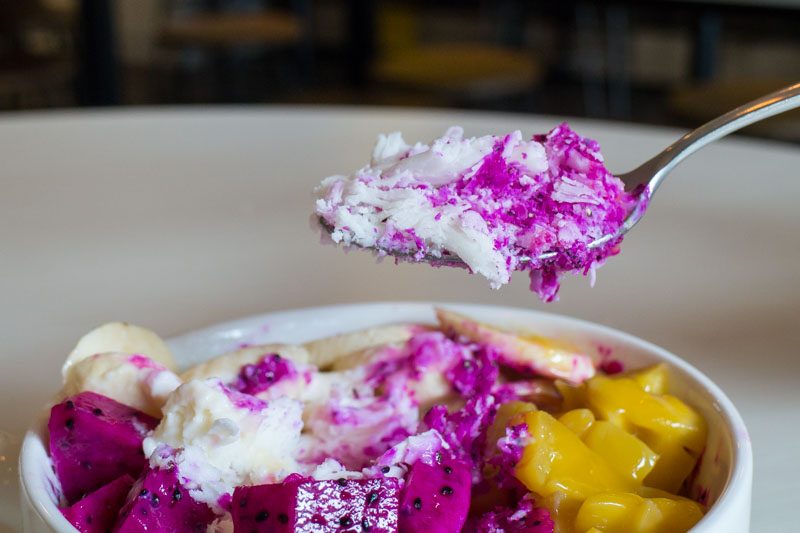 The Mixed Fruit Snow Flake comes with Australian mangoes, bananas, and purple dragonfruit. Flavours of each of these fruits complement each other well, making the Snow Flake dessert an enjoyable one.

The mangoes came with a thick syrup which helped to amp the sweetness level of the dessert. The Taiwanese Traditional Cakes sold in Monki Cafe are super soft dense, slightly different from the fluffier varieties sold outside. Its price makes it even more attractive, with each slice costing no more than $2.

Every cake is made with care daily, if you’re lucky, you might even catch a batch coming right out of the oven. The cakes come in two flavours, Original and Cheese. 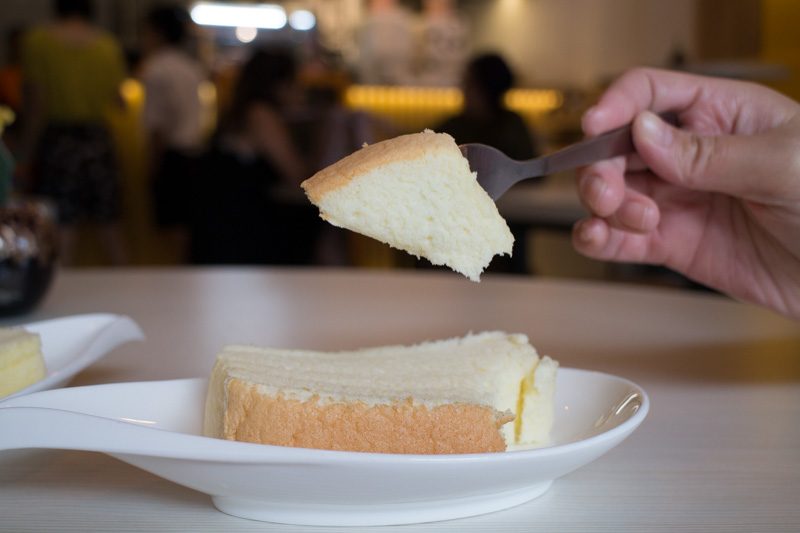 The Original Traditional Cake (Slice: $1.40, Loaf: $10) has a texture more of a Japanese Cotton Cheesecake than a Castella. Its sponge is made up of smaller bubbles, making it slightly denser.

Despite that, it manages to retain its jiggly properties. The cake is super eggy, and its slight sweetness makes it something that you can eat a lot of and not feel too heavy or bloated. 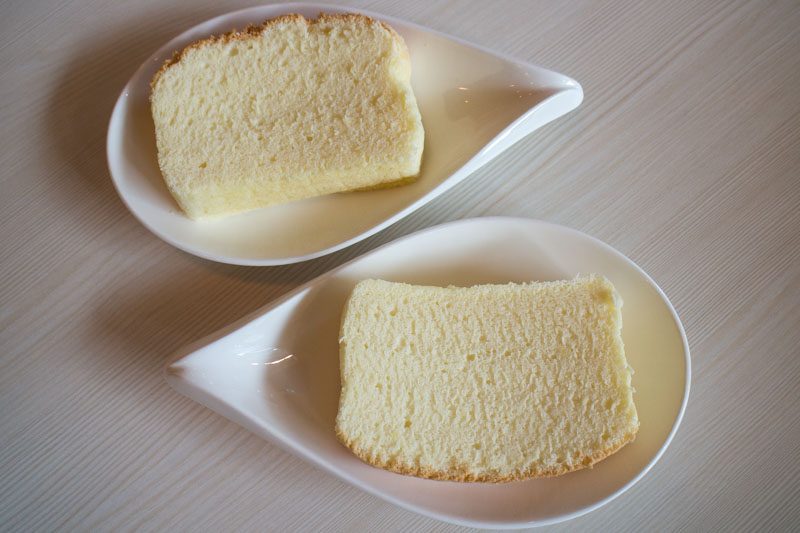 If you want to switch things up a little, get the Cheese Traditional Cake (Slice: $1.70, Loaf: $12), which has a crunchy parmesan crust baked onto the loaf. The cheese used in the cake batter also gives the cake a slightly salty edge, which makes the cake all the more delicious.

While this neighbourhood cafe may be out of the way for some, its affordable Snow Flake desserts make the trip worth it.

Instead of heading to your nearest mall for your jiggly cake fix, why not come down to try Monki’s more rustic, lovingly made version? And while you’re at it, cool off from the insane heat with some shaved ice.

Previous articleCommon Man Coffee Roasters Academy: This Barista Class In River Valley Will Teach You The Basics Of Kopi
Next articleKko Chi Bar: Watch As Your BBQ Meats Cook Themselves At This Korean Restaurant In Tanjong Pagar